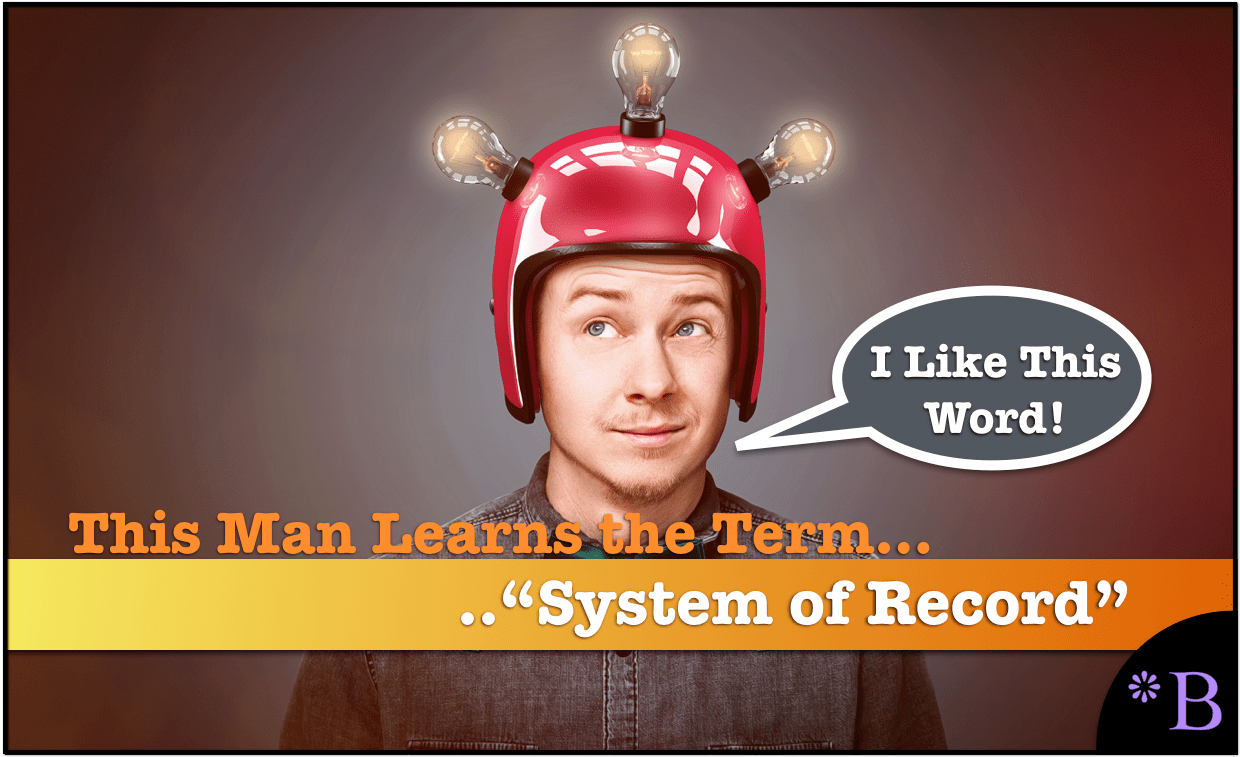 Video Introduction: How to Understand the Misuse of the Term System of Record

What is a System of Record?

Let us begin with the official definition of a system of record.

The need to identify systems of record can become acute in organizations where management information systems have been built by taking output data from multiple source systems, re-processing this data, and then re-presenting the result for a new business use.

In these cases, multiple information systems may disagree about the same piece of information. These disagreements may stem from semantic differences, differences in opinion, use of different sources – Wikipedia

The system of record for ERP originated information in ERP. However, beyond that, the other systems that arise their data are the systems of record.

So, where did the myth develop that ERP systems are the system of record in the company?

The answer to that turns out to be predictable….from ERP vendors and consultancies that make money from installing and maintaining ERP systems.

Misunderstanding What the Term System of Record

The use of the term system of record comes from a profound lack of understanding of a record system.

ERP vendors are substantially to blame for this, but ERP is not a system of record for fields. It does not originate. If we take a non-ERP application, that application will have fields that ERP does not have.

So what is the system of record? It is a non-ERP application.

Therefore the idea that ERP systems are “the system of record” is false and false in an easily provable way. Yet this term persists even though once you dig into the details, the concept quickly falls apart.

When Does the Term System of Record Normally Come Up?

When the term comes up and who uses it tells us a lot about the term. We find it curious that people who use the term often tend not to work on the software side and are non-technical. Instead, they tend to work in management. In all my daily technical discussions, I do not recall anyone using the term “system of record.” However, in the meetings with the high-level people or demos with a lot of salespeople involved, all of a sudden, the term starts being uttered.

This tells us that the word is a term of propaganda and a term of prestige adopted by non-technical people to seem technically savvy.

How Accurate was Forbes on Systems of Record vs. Systems of Engagement?

The term “system of record” is used by non-technical resources to makes a false point. This article on Forbes extends this ridiculousness of concept to “systems of engagement.” 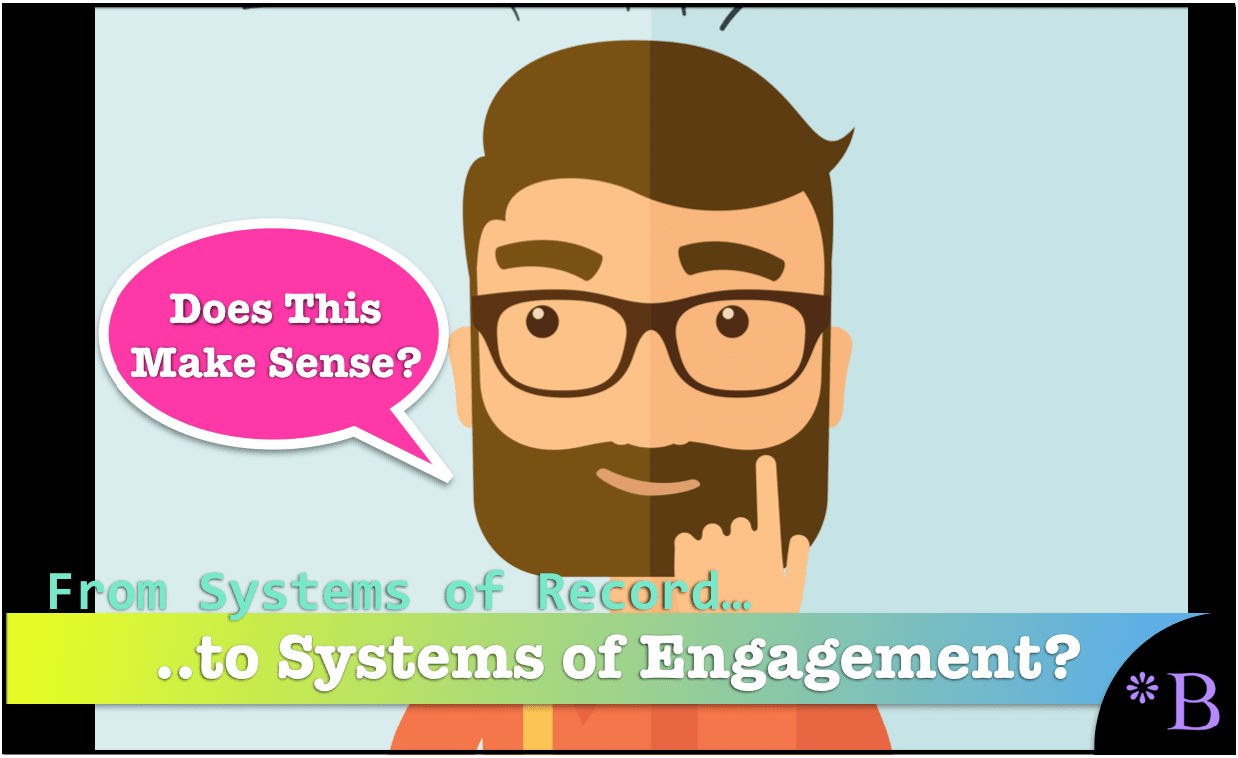 In this article, we will analyze this concept, as explained in an article from Forbes.

What is a System of Engagement?

The best way to explain what a system of engagement is and how it is presented is to provide a quote.

“There’s an ongoing discussion in the enterprise software world about “systems of record” vs. “systems of engagement.” Which do you have?

Systems of Record” are the ERP-type systems we rely on to run our business (financials, manufacturing, CRM, HR). They have to be “correct” and “integrated” so all data is consistent. And they were traditionally designed for people who have no choice but to use them.

“Systems of Engagement” are systems which are used directly by employees for “sticky uses” – like email, collaboration systems, and new social networking and learning systems. They “engage” employees. – Forbes

Here, the system of record is presented as of the ERP system (which is a deliberate inaccuracy presented by ERP vendors) and other systems. It is strange to read a CRM system being an “ERP type system,” and it would be more accurate to use a different term, but what the author is driving seems logical.

Today we are in the middle of a transition away from “systems of record” toward “systems of engagement.” If you look at SAP’s new Employee Central or Oracle’s Fusion and compare it to older SAP and Oracle applications, it’s like night and day. And these systems, which have come a long way, still have not caught systems like Silkroad and Workday. – Forbes

This is where the concept runs into problems. This is because both the older systems and the newer systems are “systems of record.” It just so happens that the more modern systems are easier to use. This problem illustrates why the term system of record should not describe older systems as it almost serves as a proxy for the term “legacy.”

The Ripe and Common Misuse of the Term System of Record

This example aligns with our earlier observations regarding the term that the vast majority of people that use the term system of record don’t understand computer systems very well. It is a prestige term that is grabbed quickly, without understanding its meaning.

Take a look how HR systems have evolved over the years. The first, labeled “Green Screen,” is an old-fashioned 1980s style mainframe HR system (I grew up on these). IBM dictated what they looked like, believe it or not. This is a “system of record. – Forbes

If one has a stone tablet used as a reference and has all the calculations used to engineer a pyramid, and excerpts of the tablet are kept on papyrus for pyramid foreman to refer to while at the construction site, then the stone table is the system of record. The term system of record has nothing to do with either how modern the data storage is or how easy it is to use.

In the Christian religion, each denomination goes through a process where they accept some books as their “system of record” and reject others. This becomes the cannon of that denomination. In religions, quite a lot of people have ended up on the wrong side of a sword or pike for not agreeing with others regarding the system of record.

One of the best movies that illustrate religious disagreements is the movie Elizabeth. Throughout the film, various people demand that others submit to “the one true faith.” Sound familiar. Perhaps you have heard the term “one source of truth” while sitting in an IT meeting?

Therefore, it shortsighted to only consider the term system of record, considering the concept has been with human societies as far back as the written language has existed.

Using the term system of record in the way used in this Forbes article is unnecessary, and it is not handled correctly. This is because it is being used, as the term mostly is, by a person with only a fleeting grasp of how computers work. It is wonderful to say that systems should become easier to use…everyone agrees they should be. But there is no need to invoke the term system of record to make this case. A system of record relates to the origin and authoritative reference point of a system related to data. It can’t be converted to mean older systems.

All of this comes down to sales. These terms are used by software vendors and consulting companies to create fallacious jargon to sell XYZ, in this case, a system of engagement.

ERP systems don’t do what they said they would do for customers. The only way around that observation is to try to ignore it. That is what is happening en masse right now with ERP systems. And when you compare it to what was promised.

Ignoring obvious outcomes inconsistent with the original intent or proposals is a significant part of the human experience. It is how we keep from having to admit how wrong we often are.

However, calling the ERP system a system record does not fill in this chasm, and it does not have a useful meaning for the management of systems.