Often not much thought is put into the term “user experience,” however, if one analyzes the term, it is not very helpful in describing what is being measured when one measures a “user experience.” I will cover the problems with this term.

If you want to see our references for this article and other related Brightwork articles, visit this link.

The Development of the Term User Experience

The term user experience was first coined in 1988 in the book The Design of Everyday Things. The objective was to develop an all-encompassing term for the user’s experience that drew a distinction from UI or user interface. For example, on a website, the text on the page is not part of the user interface, but it is a significant part of the user experience. Donald Norman described how he came up with the term in the following quote.

“I invented the term because I thought human interface and usability were too narrow. I wanted to cover all aspects of the person’s experience with the system including industrial design graphics, the interface, the physical interaction and the manual. Since then the term has spread widely, so much so that it is starting to lose it’s meaning.” – Adobe

Here Don Norman discusses the history of the term. He is unhappy with the modern overlly narrow use of the term. One problem with this is that the term is too all-encompassing to be broken down into manageable items. The use of the term today is not how Norman originally meant it to be used.

A Term Not Specific to Computers

When the term user experience is used, it is almost always within the context of computers. However, in his book, Don Normal uses the term computer or computers 28 times and the term website or websites 3 times. In fact, the book is so unfocused on computers that he published this question that was asked of him in a later edition to the book.

Many people write to ask whether the lessons of DOET also apply to computers and other digital and wireless devices. At first I was surprised at these questions—of course they do; wasn’t the answer obvious?

Question: In your book The Design of Everyday Things, you talk about the design of everything from telephones to doorknobs consisting of essentially four elements: affordance, constraint, mapping, and feedback. You weren’t talking about computers, but do you think the book also applies to them?

Answer: I was absolutely talking about computers. I deliberately didn’t use computers and other digital devices as examples because I wanted to show that the very same principles that applied to the design of doorknobs and light switches also applied to computers, digital cameras, cell phones, nuclear power control rooms, and aircraft—and, of course, vice versa.

Undermining the Term By Combining it With UI

As Don Norman just explained, the way Norman used the term is comprehensive compared to who it is used today. However, the entire term is undermined when hyphenated or combed with the term UI as in UI/UX, which is explained in the following quotation.

This is very obviously true.

What is the problem exactly? Can users not understand the text of the website? Is the navigation confusing? Specifics are far better than just saying, “it is a UI/UX issue.”

My Discomfort With the Term

I am never enthused when I use the term “user experience.” It sounds too ethereal and is as if the user of the term is posing.

The following quotation also explains this.

Because UX is such a broad term and when accountability and roles & responsibilities are usually not very clear, UX Designers might ask from time to time: “what do I actually own?” – UXDesign

The term itself is vague & confusing, becoming effectively meaningless. Ask ten people what a UX person does and you’ll get ten answers. Sure, there will be overlap in those answers, but you’re guaranteed to get a broad range of tasks & skills—from project management to programming and everything in-between. – Scott Kiekbusch

This brings up the question of why the acronym “UX” is used rather than “UE.” The first letter in the experience is “E,” not “X.”

The answer to this question is simple enough. For decades now, it has been considered trendy to use the letter “X” in technical terms and the names of technology companies. So “E” was replaced with “X.”

The problem with the term is described in the following quotation.

“Many people state that experience cannot be designed because experiences are something people have—not something that can be designed. On one hand, I completely agree.

On the other hand, UX enables us to identify what makes a good experience versus a bad one. And when done well, the designed elements of an experience become invisible and the user is delighted because we have anticipated their needs to give them something they don’t think to ask for.” – Reed Jones

Yes, that might be part of the problem with the term.

What I cover next is how the term can be hijacked and used by companies to create confusion.

Up to this point in the article, I have discussed the confusion and honest misuse of the term user experience. However, what follows is a deliberate and deceptive use of the term.

SAP and Qualtrics Confusing People with the Term User experience

SAP acquired a survey company called Qualtrics. SAP has one product that they use to open accounts and sell other applications. This is their ERP system (currently ECC, the new version being S/4HANA).

Every acquisition SAP makes needs to be interpreted by how its sales can be enhanced through association with SAP ERP. Both Qualtrics CEO Ryan Smith and Billy McDermott stated that:

That seems like an odd statement. What is that category?

Here is the pitch. 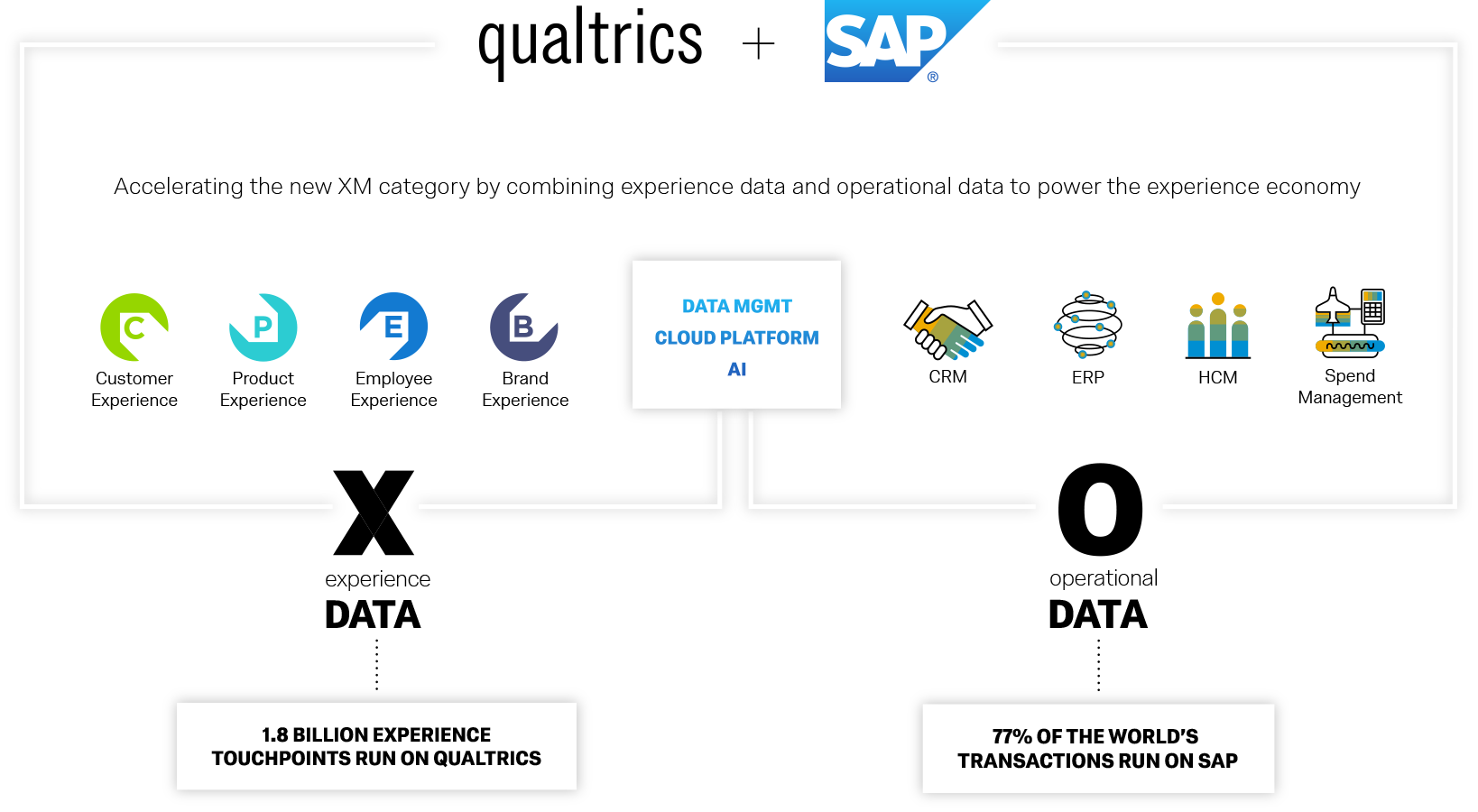 SAP seems to think this is a logical breakdown of how data works or should be viewed.

SAP and Qualtrics took the term and extended it to a new term called “experience data.” However, is that true?

Also, what is experience data?

I ask because Qualtrics is not a user experience testing platform. It is primarily survey software. Why is the data it generates “experience data”? It is survey data.

Bill McDermott addressed this concept as a distinct separation between X and O data in the following quote.

“In that context, he saw the deal as transformative. “By combining this experience data with operations, we can combine this through Qualtrics and SAP in a way that the world has never done before, and I fundamentally believe it will change this world as we know it today,” McDermott told TechCrunch on Monday.”

It sounds nice, but once one analyzes this claim, it falls apart.

Again, survey software does not collect experience data unless it is a survey related to the user experience. Any survey can be used to do that, but survey software can be designed to ask any set of questions. (obviously)

Bill McDermott stated that Qualtrics is “not surveys,” no, “its experience management.”

This seems like a combination of surveys and analytics. Why use the term “experience management?” The answer is that if Qualtrics were called what it is, which is survey and survey analytics, it won’t sell for as much money. So time to ride on the ‘user experience” hype train.

This fits into the trend of SAP, and other vendors, using glamorized terms for what is already established terms.

Some time ago, SAP stopped using the term UI or user interface and modified it to “user experience.” However, whenever SAP discusses their “user experience” it is clear they are referring to the UI of their application.

It is not clear that SAP itself knows what the distinction is between UI and user experience, and appears to think that the term user experience is a more topical way of saying UI.

The term “experience management” (XM) is substantially similar. I have not heard this term very frequently but is frequently used by SAP. 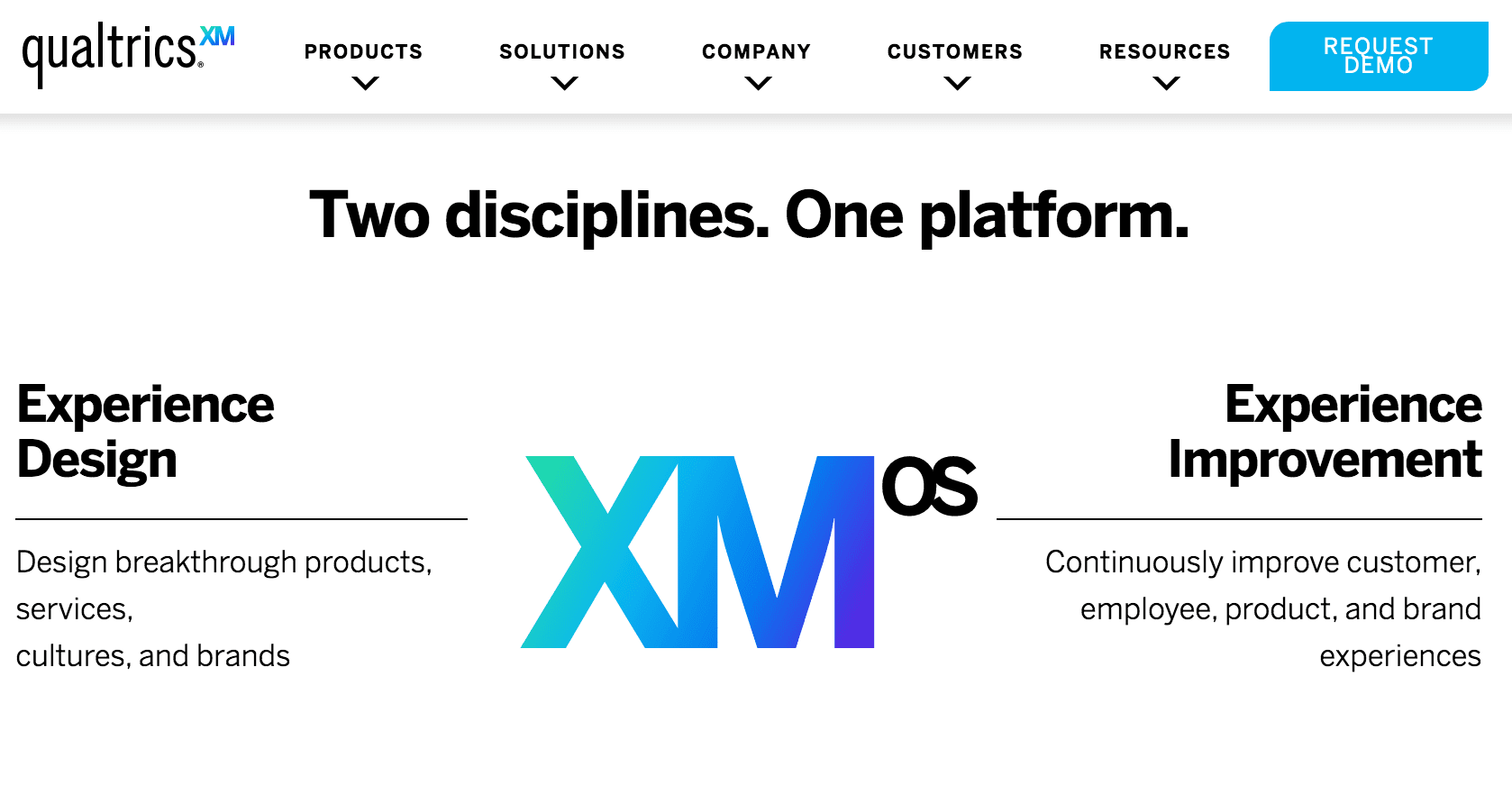 Qualtrix markets itself very heavily around the term experience management. This appears designed to distract investors and customers from the fact that it offers survey software.

Qualtrics makes the claim for its product being experience management for all of these areas when in reality it is just the same survey software.

However, the fact they make survey software is not mentioned anywhere that I could find on the website. However, when you create something in Qualtrics, it shows very clearly in the software demo that you create a survey.

So Qualtrics “experience management” software, or survey software. Because this demo shows a survey being created.

Qualtrics states that it offers much more than surveys. However, on this page, which deals with design experience, there are four different projects you can start. They once again are surveys then dashboards, imported data, and Website and App feedback. Notice the artificial expansion of data capture methods.

Using the Terms UX and XM to Deceive People

This is a deceptive gimmick on the part of Qualtrics which may partially explain their success and the far higher price they can charge and valuation they have versus survey software.

The reason for this terminology churn is, at its essence, deception.

SAP keeps customers off balance by taking the “high ground” concerning terminology. It sets up SAP as superior because it uses terminology that others are not familiar with (as SAP made it up) and creates the implication that SAP knows something that the receiver of the message does not know.

The term user experience is uncomfortable to use and to hear used (at least for me). And a significant reason for this is that it used to describe a narrow item when Don Norman created the term to describe the complete experience with a product or company. The example he gave in the video earlier in this article was the totality of experience from buying an Apple computer to using it. I would have to assume even getting it repaired. This describes virtually everything or every experience the customer has with an Apple computer. It would mean that not only is the Apple store part of the user experience but so is the Apple supply chain, as that determines how quickly the computer or parts arrive. I would then also have to include the quality of the computer, how frequently it breaks, how easy it is to repair, how well the performance of the computer is maintained over time, how good the software is that runs on the Apple computer. In that context, and what Don Norman originally meant, I am quite comfortable with the term.

My discomfort comes from the term describing much more narrow aspects versus what Don Norman initially meant when he coined the term.

The term user experience is here to stay, even though I feel a reflexive contradiction with the word every time we use it or hear it used.

What is truly amazing is that until I performed the research to write this article, I had no idea that the term was initially coined to mean something very different from its common usage today.