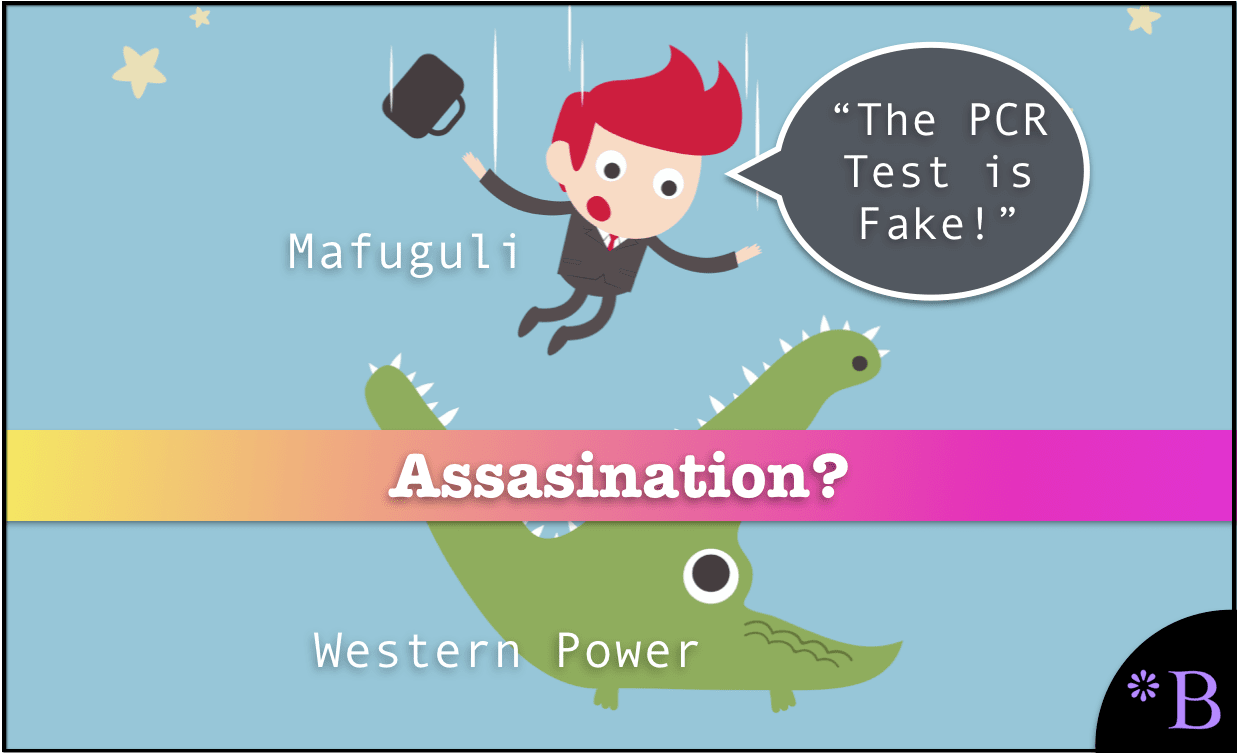 Magufuli figured out that the PCR covid tests were a scam and did so convincingly by testing fruit and livestock and finding they came back positive. This article includes a video that is one of the most devastating takedowns of the PCR test that make it look like a pandemic. It then asks the question of whether Magufuli was assassinated.

The following is a video of Magufuli exposing the PCR tests as fraudulent. I did not find this video until many months after it was recorded, and the establishment media did not show this video to the public. But they did mention he made the comments, and this deprived Magufuli of the right to have his views heard in their entirety.

What is impressive is that this is the only known testing of this type that I have ever run across that has been discussed.

Magufuli died in March of 2021. The western establishment media repeatedly referred to Magufuli as a “covid denier.” However, they did not address his claims in the video above. I did not see a single media entity contradicting Magufuli’s evidence, nor did they perform their testing using the PCR test.

The Fact that Magufuli Disagreed With Health Authorities Means He Must Be Wrong?

Strangely rather than paying attention to what Magufuli said, they used what he said about the PCR test as evidence that he must be insane. However, what evidence is there that the PCR test works?

The following is a typical quotation from the establishment media on this topic.

While his response to COVID-19 may seem unhinged, it is also straight out of his normal playbook.

When he waged an ‘economic war’, the pretext was the alleged discovery of years of under-reporting of mineral exports by foreign mining companies. – The Conversation

I covered this in the article How Accurate is the Economist’s Article on Magufuli Versus Acacia Mining?, Acacia Mining had been illegally avoiding taxes by paying off the Tanzanian mining authorities to underestimate the amount of material exported from Tanzania for decades.

Why is this considered a negative for Magufuli to stop Acacia Mining from doing this? One wonders if the author analyzed this issue at all before determining Magufuli must be on the wrong side of the issue.

Exposing fraudulent COVID-19 test kits approved by the WHO runs off the same script. – The Conversation

Is this a script or true? Isn’t the most important question whether what Magufuli is doing is accurate?

Magufuli had a habit of questioning entities that told him lies. In one case, it was a mining company, and in the other, it was international health authorities.

It seems like the script this author would prefer is if Magufuli believed everything told to him by powerful entities, and that is the “script” that most other world leaders follow. I thought that Tanzania was a soveirgin nation, however, it seems the author wants the leader of Tanzania to agree with foreign multinationals and international health authorities on all topics.

The dismissal of the eminently qualified National Laboratory Director Nyambura Moremi also sounds like a return to old tactics. Magufuli has made firing public officials a signature move. It displays decisive action and finds scapegoats which leave president and party unblemished by blame. – The Conversation

Magufuli was removing what he considered corrupt officials from his government. I do not know if these individuals were corrupt, but there is no debate that the Tanzania that Magufuli inherited when he took power was highly filled with corruption.

Therefore, it is not suspicious that some officials would be removed for corruption. Being qualified does not mean that that person is not corrupt. Again, does the author know if these people removed were not corrupt?

This tragedy is accompanied by another: Magufuli’s projects elevate worthy causes, but also sullies them. Corruption is indeed widespread. Foreign companies are indeed exploitative. Not all aid is sent with the best intentions. Industrialisation is a worthy goal. – The Conversation

If the author acknowledges that corruption is widespread in Tanzania, why is he so surprised that Magufuli would have some officials removed? If Tanzania has corruption, one of the most direct ways of fighting it is to remove corrupt officials.

Tanzania ought to aspire to better lives for it citizens. These causes are laudable and it is good that Magufuli pursues them. But his conduct over COVID-19 and democracy tarnishes them by association. – The Conversation

I will leave the comment on Magufuli’s suppression of democracy to the side for a moment. I cannot confirm if Magufuli did suppress democracy. I know that western media has a habit of critiquing countries or leaders as “not democratic” if they don’t do what western multinationals want.

For example, you don’t read very much about the complete lack of democracy in Saudi Arabia or the Gulf States, as those countries comply with western interests.

But if we return to the topic of Magufuli and covid, unfortunately for this author, who appears incredibly compliant to power, which is a significant problem with journalists, Magufuli was correct on covid. His views in early 2020 were very outside the mainstream, but he ended up being suitable with the benefit of hindsight.

It took tremendous courage to do this. Therefore, Magufuli needed to be killed because he could have exposed how false the pandemic was if he was not crushed. Magufuli was succeeded by Mheshimiwa Rais, who reversed Magufuli’s covid policy for Tanzania. From observing her public statements, she looks like she will be a much more appealing leader of Tanzania for western interests as she has no critical thinking skills and will be an excellent pawn.

Magufuli figured out almost before anyone else that the covid pandemic was manufactured and based upon, in part, a fake PCR test. The extent of the steps taken to create the pandemic are covered in the article Pandemic In A Box: The Specific Steps Used to Create the Covid Pandemic.

The PCR test creates false positives continually, and it was never trained on an actual covid virus. This is explained in the article Understanding The PCR Test And How There Was Never a Reliable Test for Covid.