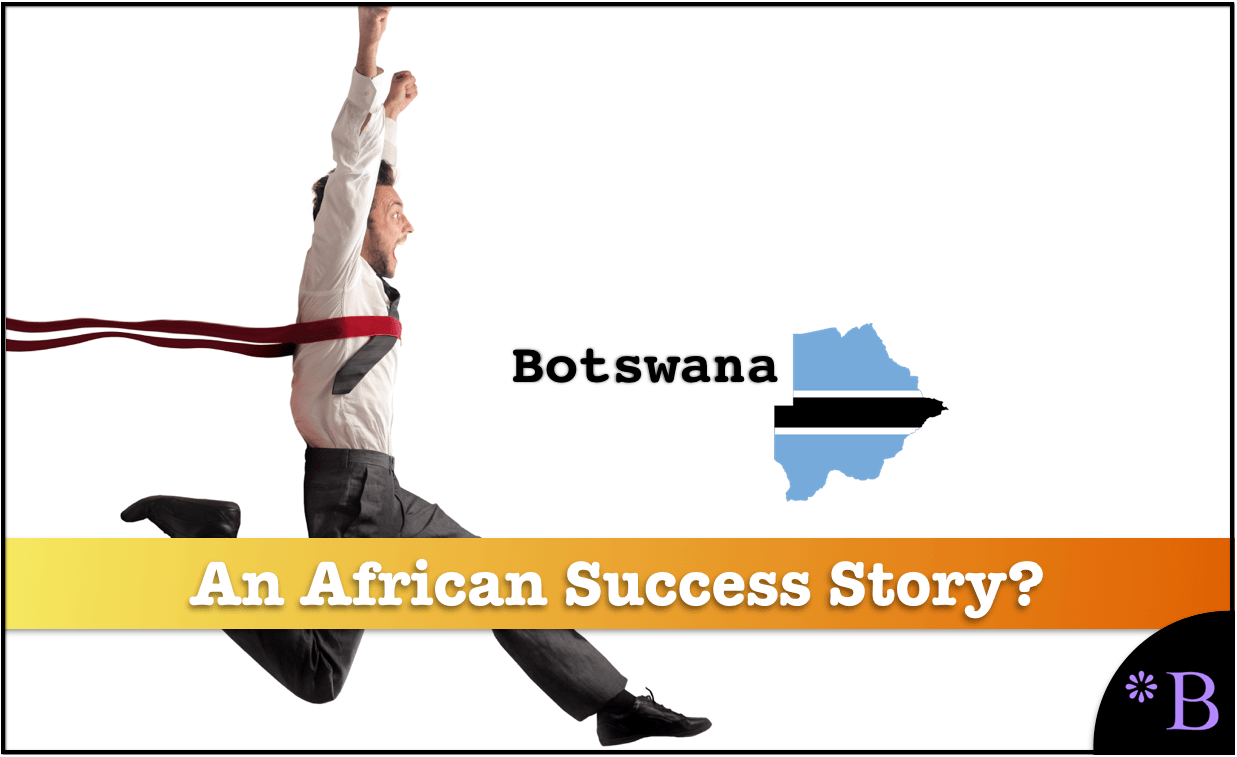 Botswana is an example of a county that met the promises to its citizens. So what does the example of Botswana show us?

Botswana not only made material progress but also is has the lowest level of corruption in sub-Saharan Africa. Curiously, archeologists indicate that humanity first arose from Botswana over 200,000 years ago — so we all, in essence, deserve a “Botswana passport.” 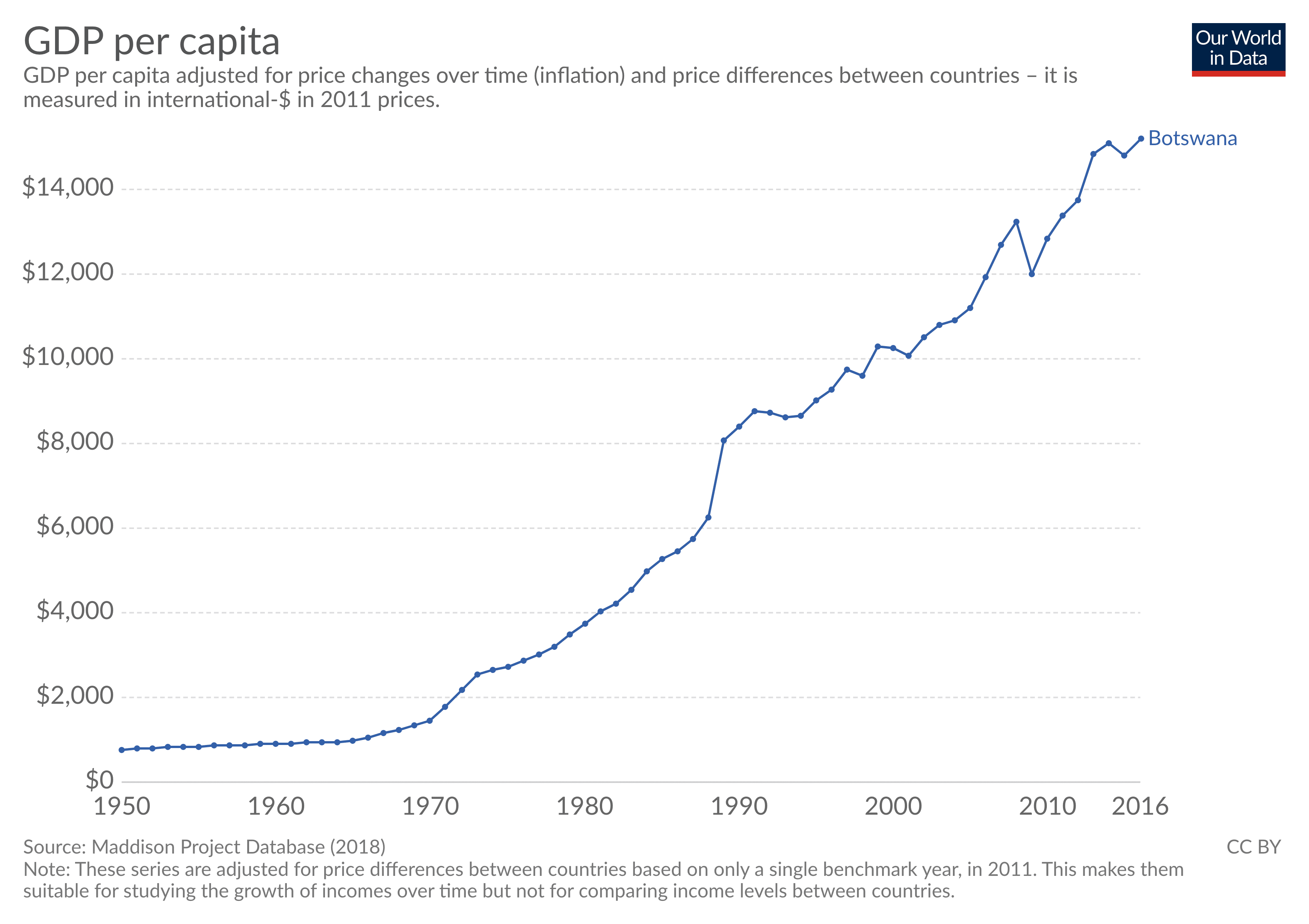 Botswana is the best economic success story in Africa. However, the achievement did not occur without significant assistance (much of it entirely self-serving) of societies close to Botswana. The type of growth observed in the chart above is not possible without importing methods and technologies from outside of civilization.

South Africa represents around 25% of all economic activity in South Africa. South Africa, as it is (or more was) a white-based society, and contained nearly all of the advanced items and advanced infrastructure in Africa. At one time, before the government transitioned to ANC control, they even had nuclear weapons (a program which was dismantled before the ANC took power.

South Africa’s capabilities give countries close to South Africa significant advantages. Not the least of which is ready access to skilled labor and specifically engineering talent. South Africa has for many years have the largest diamond mining operations in the world, and South Africa’s DeBeers has major operations in Botswana, which we will cover in more detail further in the article.

Botswana is also bordered by Namibia, which is another historically white-run country.

Therefore, two of Botswana’s largest neighbors are also two of the most advanced countries in Africa and both very experience in mining and, mining technology and operations.

However, Angola also borders Namibia (but not South Africa),(although its borders are to the south of Namibia, so less proximate to Namibia’s population). Angola has substantial mineral resources, much like Botswana. Still, the internal conflict and other reasons I am not privy to, has prevented it from leveraging its position close to white-run countries (South Africa is no longer white run, but I am speaking here of historical patterns).

Before independence in 1975, Angola was a breadbasket of southern Africa and a major exporter of bananas, coffee and sisal, but three decades of civil war (1975–2002) destroyed fertile countryside, left it littered with landmines and drove millions into the cities.

The country now depends on expensive food imports, mainly from South Africa and Portugal, while more than 90% of farming is done at the family and subsistence level. Thousands of Angolan small-scale farmers are trapped in poverty.[98] – Wikipedia

Like Namibia, Botswana has a small population at only 2.3 M.

Why is this advantageous? Well, this leads to the next topic.

Botswana has the largest and most lucrative diamond mine in the world.

Botswana was able to leverage its proximity to western technical expertise — combined with its mineral endowment to make diamonds a large percentage of its overall economy.

If Botswana’s population were to say 25 million, that mineral wealth would not have such a strong promotional effect on the economy. That is where it would be less to “go around.”

In most African countries, like, for instance, Equitorial Guinea, The Democratic Republic of Congo, or Nigeria, the benefits of valuable natural resources go to just a tiny elite in that country. Botswana generally stopped this from happening. While the country does have high-income inequality, many of the benefits of diamond were shared.

The video pointed out that DeBeers just wanted to buy raw diamonds from Botswana and then “add value” to the diamonds outside of the country. Botswana pushed for more value-added — such as the work to convert diamonds into finished jewelry within the country. This is a constant issue with mining in Africa, that white-run companies really only want to export the raw materials from African nations, and add value outside of Africa.

Advantage #4: A Large Land Area Per its Population

Similarly, Botswana has an enviable condition of having a very large land area, especially considering its population. It has a landmass the size of France (population 66 M), but with only 3.4% of the population. This means that it would hypothetically face fewer environmental pressures (although, as we will see, Botswana does face environmental challenges). Other African countries have had their populations grow out of control. Botswana has stayed away from many of these problems.

However, even at this low population level, Botswana faces desertification and its cattle industry, which is one of its other largest industries, has overgrazed.

Botswana has large desert regions and little rain in most of the country. If they do not curtail their cattle industry, they could be in for some serious consequences.

This will, of course, come to confronting the cattle industry in Botswana, which will naturally try to bribe politicians to get them to ignore the long term environmental consequences.

Desertification and water shortages are a worldwide issue. In the US western states, Colorado River has been aggressively overconsumed. India’s groundwater levels are in a severe decline.

Botswana is predicted to run out of diamonds in just a few decades. This has caused them to — like many Middle Eastern countries, try to use their current income from diamonds to diversify their economy. Most countries that try to do this are not successful.

Botswana has several technical labs it has set up, as it tries to push into technology industries; however, the recent scandal around how it treated a mass death of elephants is not encouraging.

“This is a mass die-off on a level that hasn’t been seen in a very, very long time. Outside of drought, I don’t know of a die-off that has been this significant,” National Park Rescue’s McCann told The Guardian.

Botswana is home to around 130,000 elephants, Africa’s highest population of the animals, according to the BBC. However, numbers are in decline and the animals are classed as vulnerable, according to the World Wide Fund for Nature. Around 10,000 of those live in the grassy Okavango Delta, which floods seasonally.

At his election, President Masisi said he was putting the needs of the country’s population ahead of how western countries value the animals, The New York Times reported. The country auctioned off its first elephant hunting licenses in February 2020, the BBC reported.

On May 27, officials visited to take samples for testing, according to Hiley. As Botswana does not have its own testing capacity, they needed to be sent abroad.

Initially, the government said it would send them to a lab in Pretoria, South Africa, but instead sent them to a lab in northern Botswana, according to Hiley. Hiley described the lab as “unqualified” to handle them.

For example, let us say Tanzania wanted to copy Botswana. Tanzania also has large mineral endowments. However, it does not share a border with South Africa, and it has a population of 56 M. Tanzania has even more tourism than Botswana. Still, it does not have the same advantages of Botswana.

How Botswana Did It

Botswana exploited its resources with the help of external technology and expertise. And they did a very good job of doing this. They could have ended up like Equitorial Guinea instead — but have been far better managed than Equitorial Guinea. However, its two driving economic engines — its diamond resources and its cattle farming have reached a point of diminishing returns. Their diamonds are running down, and their cattle industry has overgrazed the environment. Botswana will have to rely on other industries as their two primary industries are on the decline.

The problem Botswana faces is that few countries that have risen due to resource extraction have been successful in transitioning their economies to new areas. Botswana seeks to move into scientific laboratories. However, they could not even manage the distribution of samples from elephants who had died of mysterious causes. Developing a scientific culture in Africa or many countries with no experience in it is no easy matter. Furthermore, there are no African nations outside of South Africa when whites ran it, that has ever succeeded in areas outside of resource extraction and tourism. Can Botswana buck the trend?