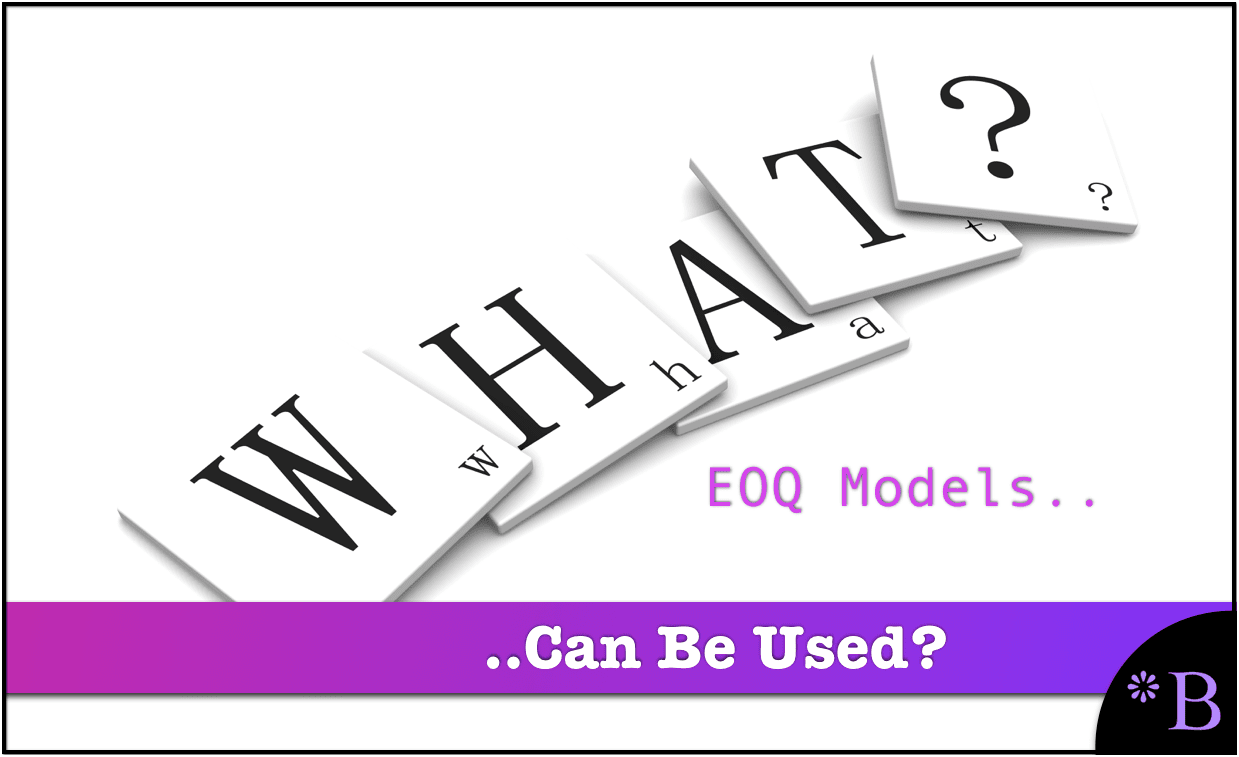 The question of what EOQ model to be implemented helps one customize the EOQ. 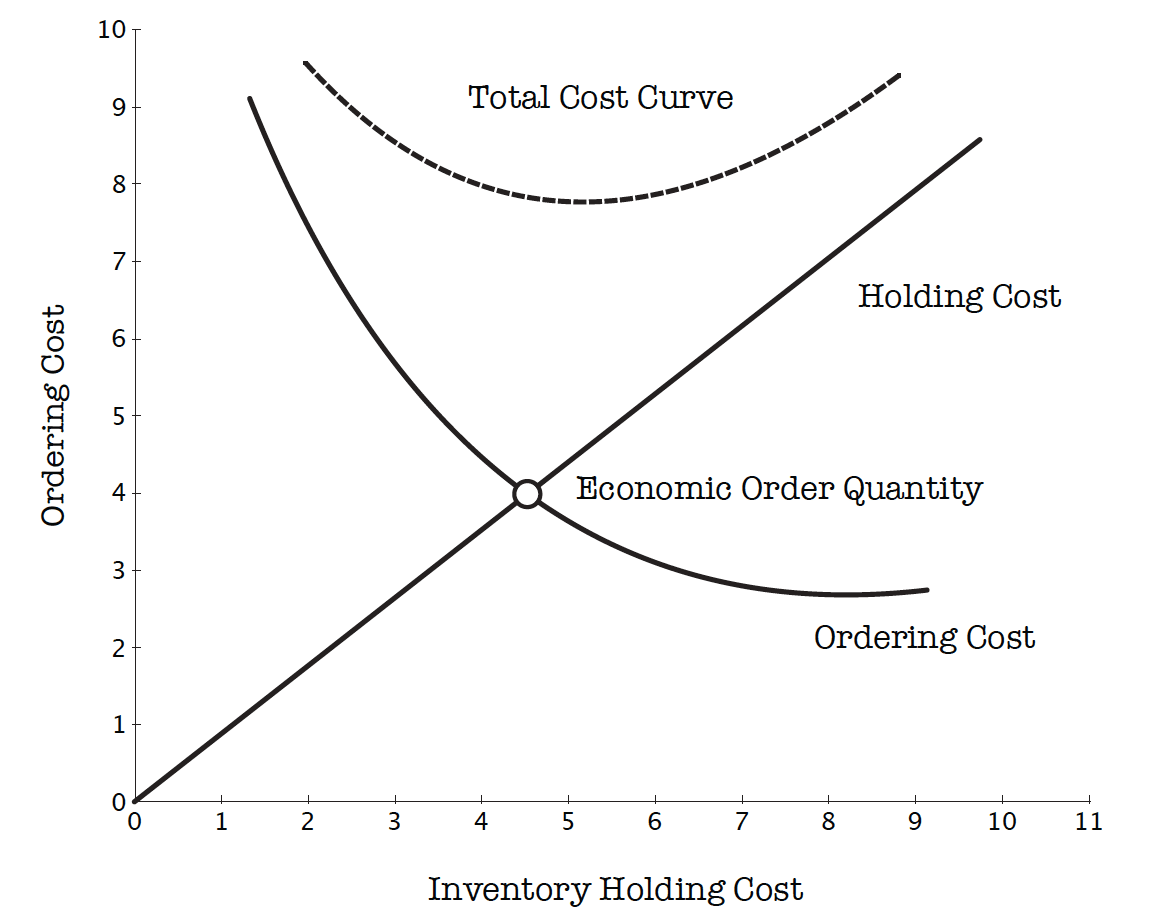 EOQ is a way of calculating reorder points.

EOQ is one method for performing what is generally known as lot sizing. The lot size is the quantity in which the item is produced or procured, and therefore it is set at the production location combination in the product master.

If there are quantity discounts, the calculation below will not be accurate. For instance, the formula below may propose an EOQ of 184 units. If the price per each at this level is $50, then this is a total cost of (184 * $50) + 45 or $9,245. However, if the quantity discount kicks in at 200 units and this discount is 15%, then 16 more units could be obtained for $8,538. This would be a missed opportunity. This can be easily calculated for an individual item, but this cannot be systematized because supply planning applications do not have EOQ functionality or even step function min lot sizes. Typically this is handled by procurement as they are up to date on the volume discounts and will increase the orders to meet the discount. 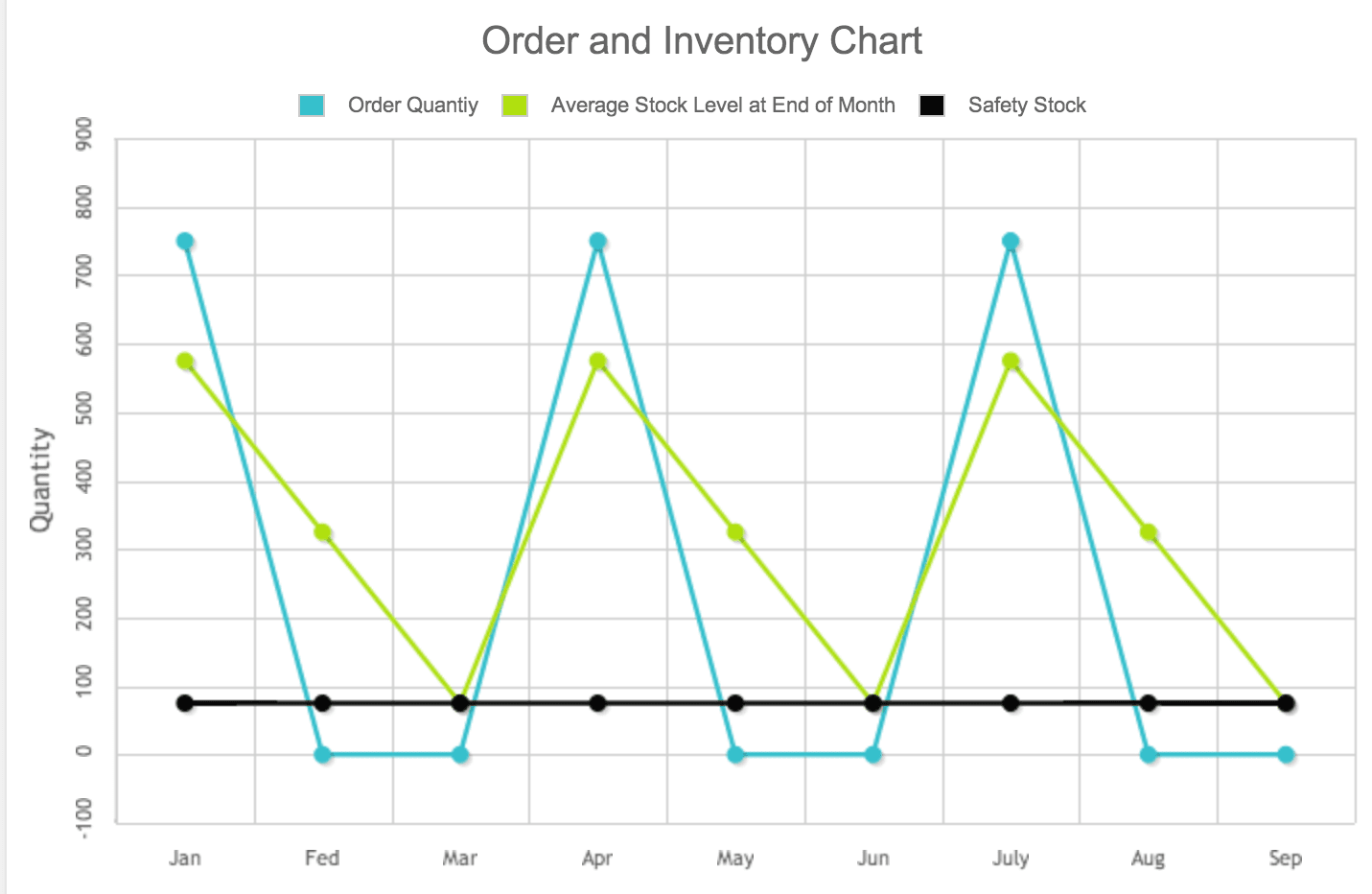 This is the well known saw tooth pattern, which is a feature of the stocking level rising to its highest point when a new procurement order is received, or new production order is completed. With the stocking level declining to its lowest point right before the procurement, the order is received or right before a new production order is scheduled. The minimum stock level should be the safety stock, which the inventory level may consume due to variability in demand or supply.

EOQ has some slight adjustments to the formula used to account for different requirements like the calculator included at the link below, which calculates an EOQ in the case where the company wants to build inventory. This topic is covered in the article EOQ for Pulling Forward Inventory.

There can be scenarios where the shelf life of the product does not allow for the full EOQ to be ordered. In this case, the EOQ formula should not be used, and the shelf lifetime converted into units, should be used instead (Silver and  Peterson). The same issue applies to products that go through frequent revisions, where ordering the EOQ would or could result in significant obsolescence. EOQ must also be managed versus storage capacity. In general, storage capacity is less expensive than accepting increased costs through shorter production runs.

However, this does not seem to have much influence on companies because they cannot quantify how their production costs change from changing the production runs.

Therefore, philosophy rather than facts tends to rule the day with a much higher focus being placed in inventory and storage costs rather than production costs. Although this much depends upon the company. Some companies work exactly the opposite, focusing very little on reducing inventory and being primarily focused on minimizing procurement costs through buying in vast and uneconomic quantities. The question becomes quite a bit more grey for procured items where the prices to be traded off are quantity discounts and order costs.

This article answered what EOQ models could be used by just describing a few. There is an enormous number of different EOQ models. However, in most cases, the standard EOQ model is deployed, and this is the formula entered into supply planning applications.

And it comes down to the forecastability of the product location combination. If the forecast is of reasonable accuracy, then MRP can be used. If the forecast is high in error, and cannot be improved much beyond this error, then a reorder point will typically perform better than creating a forecast.

One of the best ways to understand how to set reorder points externally, we developed an approach where reorder points are calculated externally. This allows for a higher degree of control and for the average inventory to be coestimated in a way that provides an observable total system inventory, holding cost, service level, and a picture of what is happening to the overall system. This is called the Brightwork Explorer. Calculating individual parameters like reorder points without an appreciation for the systemwide does not make any sense.