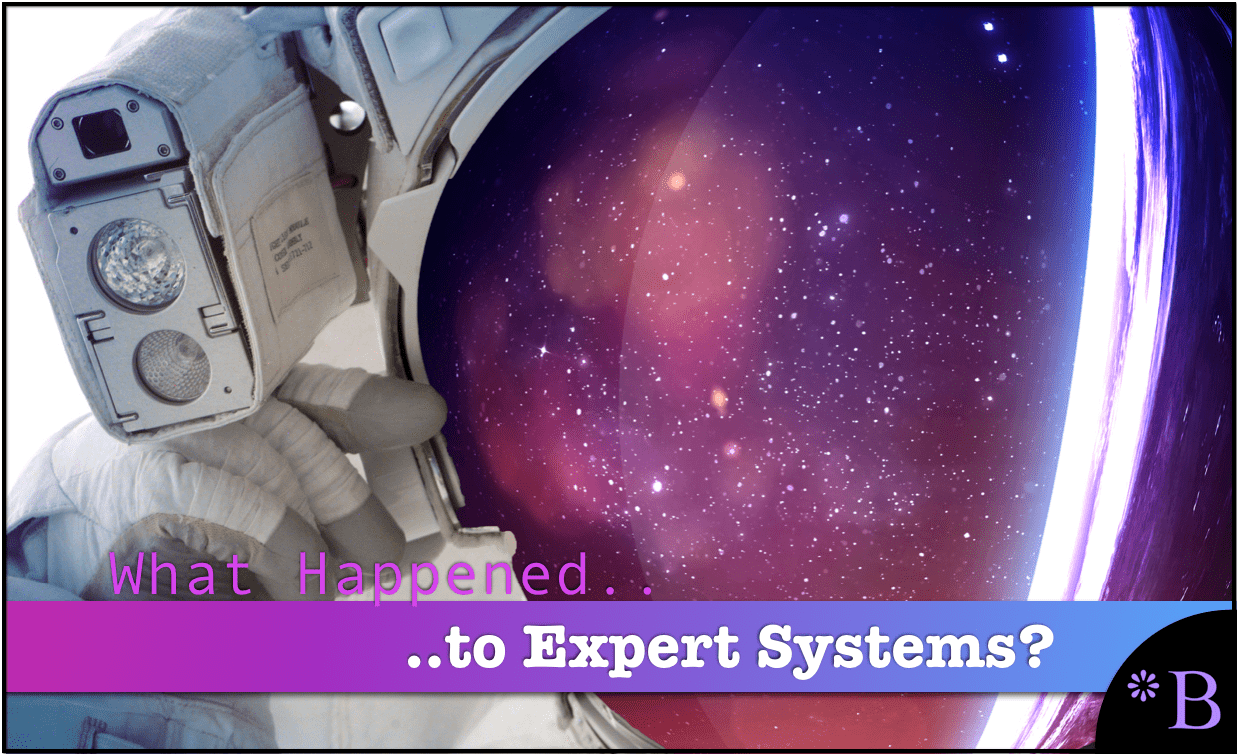 The first AI bubble was based upon highly inaccurate projections on what could be accomplished in generalized intelligence or Strong AI by proponents like Marvin Minsky. The second AI bubble was about AI research switching away from generalized intelligence and towards something called expert systems, an area that is for some reason, barely discussed in the present day, and at the time of the third AI bubble.

The third AI bubble (the one we are in presently) is driven not by generalized intelligence or expert systems, but by neural networks/deep learning.

What is an Expert System?

In artificial intelligence, an expert system is a computer system that emulates the decision-making ability of a human expert. Expert systems are designed to solve complex problems by reasoning through bodies of knowledge, represented mainly as if–then rules rather than through conventional procedural code.

How is that the case?

In decades of IT consulting I never witnessed an expert system. In fact, the term expert system went entirely out of vogue after the 2nd AI bubble popped. Examples of expert systems that I researched were little more than domain expertise databases.

And something else left out is why the focus moved to expert systems — which were “baby systems” compared to what was promised during the first AI bubble. Marvin Minsky and other AI experts promised full generalized intelligence, by sometime around the 1980s. All that had to be done, was for computers to model the human brain — which according to the major proponents of the first AI bubble worked exactly like a computer.

The following quote is also from Wikipedia. It is difficult to find much of substance written on expert systems, and in reviewing the web pages on expert systems, we found the most substantial content at Wikipedia, but there is a problem with this quotation.

In the 1990s and beyond, the term expert system and the idea of a standalone AI system mostly dropped from the IT lexicon. There are two interpretations of this. One is that “expert systems failed”: the IT world moved on because expert systems did not deliver on their over hyped promise. The other is the mirror opposite, that expert systems were simply victims of their success: as IT professionals grasped concepts such as rule engines, such tools migrated from being standalone tools for developing special purpose expert systems, to being one of many standard tools. Many of the leading major business application suite vendors (such as SAP, Siebel, and Oracle) integrated expert system abilities into their suite of products as a way of specifying business logic – rule engines are no longer simply for defining the rules an expert would use but for any type of complex, volatile, and critical business logic; they often go hand in hand with business process automation and integration environments.(Emphasis added)

Yes, well the first interpretation is accurate, and the second is not.

Again, expert systems or anything like expert systems has not been a topic of conversation. And SAP and Siebel are programmed functionality. How is running MRP or recording an accounts receivable transaction or displaying the sales forecast an expert system?

But the person who made this entry into Wikipedia appears to has an incentive to try to define “expert system” so broadly as to be meaningless. This goes along with a long term pattern not just in AI, to try to justify failed investments. SAP ECC and Seibel CRM are designed to record the transactions. Their only “decision support,” if it can be called that is that one can view reports. But is a report an expert system? If so, why don’t visualization vendors like Tableau or Power BI bother using the term expert system in their marketing collateral?

AI is when the software is able to respond to changes. It is not when it is programmed specifically to provide functionality for data input. We cover the distinction between preset programming and machine learning in the article Why Train Neural Networks When One Can Perform Preset Programming.

If applications like those from SAP, Oracle, or Salesforce (Salesforce, for example, has Einstein, which is some type of gussied up AI, but that is not what his article is referring to), then the term expert systems do not have any real meaning.

Expert systems appear to be a type of programmed domain expertise. It was a huge step back from the claims of the first AI bubble that was supposed to lead to a virtually conscious intelligence by the 1980s.

What is curious is that while the second AI bubble is well known, there is little discussion that the primary artifact of the second AI bubble appears to have not been AI at all. We have reviewed some different comments that perhaps expert systems were subsumed into other systems or that they are competitive advantage within companies, and companies don’t talk about their competitive advantages (try to keep a vendor or consulting firm quiet about their successes with anything within their customers).

What is curious is we found no commentary that perhaps expert systems were nothing more than marketing fluff. In our research into the first AI bubble, we found a massive amount of false claims, with the claims of expert systems being just another in a long line of false information provided by those that worked in the AI industry — including some of the most prestigious academics like Marvin Minsky.

Now when we turn our attention to the second AI bubble, we again find vaporware, and as with the first AI bubble a general disinterest in discussing what happened to the promises made by these systems. In nearly all the coverage of expert systems, it is mentioned by those that cover the topic that expert systems were the second phase of AI, but almost no coverage that the claims made by proponents of expert systems were not true. The reason the 2nd AI bubble popped is that what was promised by expert systems was very far from what was promised. Ever since the origin of AI in the 1950s, there appears to be a constant orientation to cover up the false claims of AI.

A major problem is that journalists that work for major establishment media don’t know anything about AI/ML and tend to gullibly repeat whatever they are told from whatever AI expert they are pointed to, and these AI experts tend to have large financial biases in favor of AI. Note how McDonald’s was able to receive positive coverage by claiming that they were adding AI to their menus through acquiring an AI company as we cover in the article How Awful Was the Coverage of the McDonald’s AI Acquisition?

We are already predicting a pop to the third AI bubble based upon neural networks, and triggered first by IBM’s win at Jeopardy!

When this third bubble pops, will there be as little interest in researching the claims made by those that helped promote the bubble? Will there be a fourth AI bubble, where just as with the 2nd, and 3rd AI bubbles, the history of false claims of the previous bubbles is swept under the carpet? History says yes. As we cover in the article Why Couldn’t Gorbachev Figure Out The Strategic Defense Initiative or Star Wars, even outside of IT, there is a long term pattern of not accurately critiquing failure.