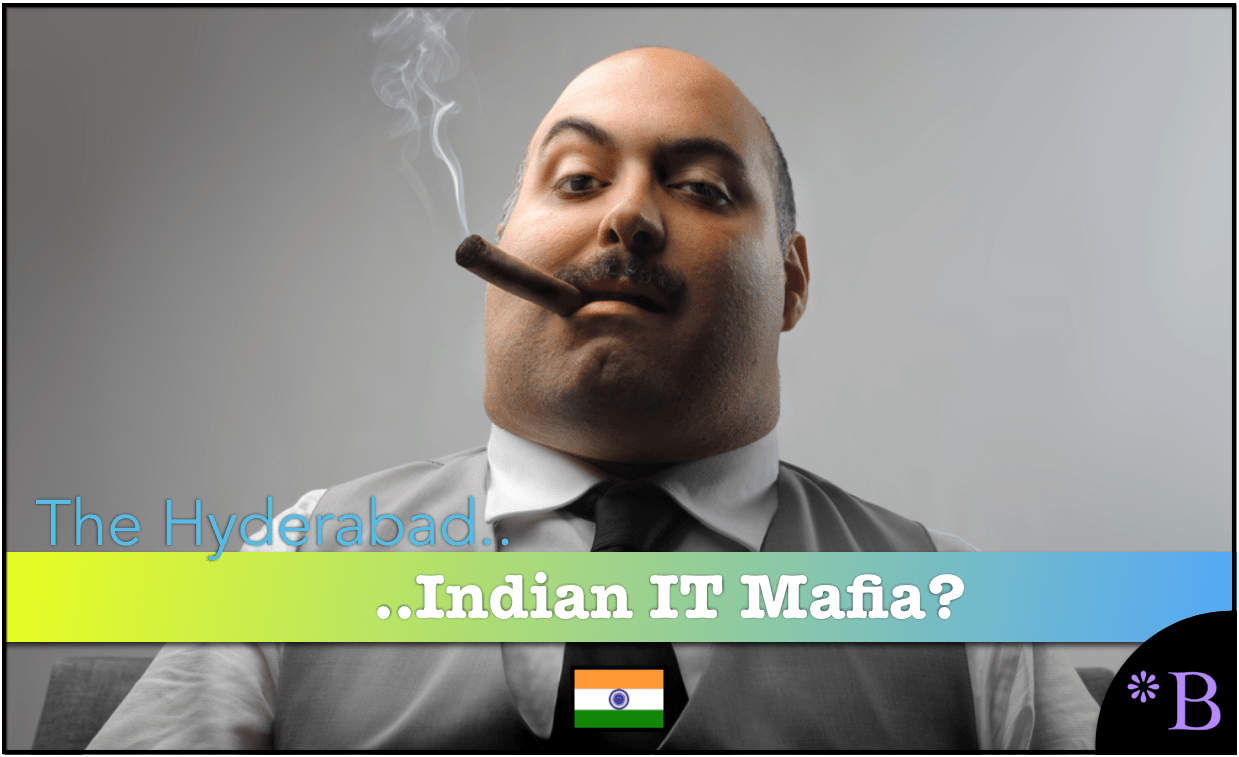 It is often presented, or at least assumed that the H1-B program that fills so many US IT jobs draws people from all over India. There is little knowledge that it has been rigged by a specific group in India by what is called the Hyderabad Mafia.

In this article, we describe how this rigging works.

One city of India (Hyderabad) and area within less than 30 miles radius has more people in US IT than All of US Born, that goes to show the absurdity of the situation. Though you will never find single top tier IT talent from India, may be handful in second tier. But in third tier more than 30% are from the city of Hyderabad, through a lottery process. Also, in the management positions Indian origin have a very large presence who approves projects and hirings with Hydrabad in mind. The IT ecosystem from Hyderabad created more CEO’s in US IT than top 100 colleges in US. In India it is dubbed as Hyderabad , Indian IT Mafia Eco system. – Indians Are Gatekeepers to IT Jobs, & Deny US IT Opportunity

This of course undermines the argument about Indian skills. If the best skills were being selected for H1-Bs, they would not primarily come from a very small area of India. And H1-Bs are not only from Hyderabad but are concentrated in specific high castes in India.

Instead of calling it US immigration policy, call it US Telugu immigration policy. Most of the Indian IT company has 95% Indian employees, rest of them are mostly Indian origin US citizens low on totem pole, low paid jobs like cleaners or front desk or support staff. They could get away with discrimination because congress passes laws to protect them against any lawsuit for discrimination. Now it is impossible to sue for restitution, Indians lately have been thinking of suing US Military. – Indians Are Gatekeepers to IT Jobs, & Deny US IT Opportunity

“Telugu” meaning the language of Telugu which is spoken by Indians in Andhra Pradesh, Telangana, and Yanam district of Puducherry. (Wikipedia)

Curiously, the concentration of the H1-B program is unknown in the US by US domestic workers and the rest of the non-Indian population.

How Senior Positions in Silicon Valley are Determined by Indians

(Anbody from that ecosystem is put to higher positions than they truly deserve. Google CEO is a Standard MS. Many stanford graduates, but US Borm, are passed for higer positions. Similar case with Twitter CTO. Many Stanford grads were passed for him, because he is approved by the Indian Hydrabad IT Mafia eco system. That position was open for 5 year, Twitter matured into an industry leader before twitter knew about him. But still waited for, him, while letting  go of Stanford grads with honors. Only thing he did for twitter is give jobs in thousands to Indian origin and Indian corps.. Bill Gate was the one putting indians in high position, using his clout and investment.  Many of those were busted for crimes and cost average share holders millions of dollars. – Indians Are Gatekeepers to IT Jobs, & Deny US IT Opportunity

This quote checks out with our research into Bill Gates and the policies in Microsoft, and how The Bill and Melinda Gates Foundation has been pushing Common Core in schools as we cover in the article How Bill Gates Lied and Introduced the Defunct Common Core to Falsify the Skills Shortage.

This is directly related to our article, The Problem With Indians as GateKeepers for US IT Purchases, which explains how Indians do this in other areas as well.

Americans and IT US domestic IT workers in general have a complete misunderstanding of the H1-B program. The H1-B program is not some merit-based system, and it is only partially controlled by authorities and companies in the US. The system has been rigged by a consortium of powerful interests in India. They allocate H1-B and F1 visas to Indians they want to come to the US. For example, some companies like Cognizant import massive numbers of H1-Bs as we cover in the article Cognizant Receives Approval for 28,908 H1-B Visas in a Single Year.