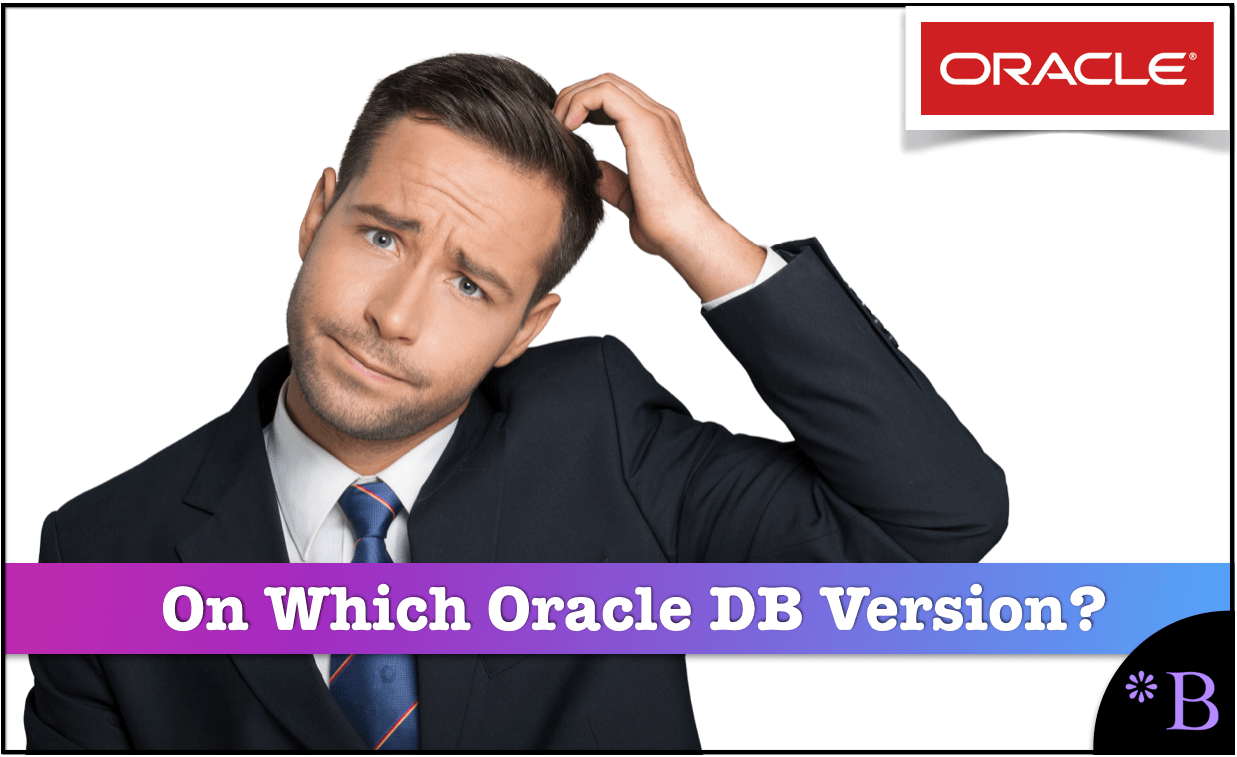 Oracle has been introducing increasingly sophisticated versions of its flagship database products in the past few years. Garnering little attention in the technology press, unfortunately, is the resistance of many large enterprises to migrate to those databases and the resulting waste of Oracle support dollars.

The data for this chart was acquired from HG Insights. This is the data that was pulled from their website on June 1, 2019. This company verifies the usage of applications and databases, but not all information is confirmed to the most recent month. The verifications are performed in a cycle, and this is how these verification services work.

By taking the counts for each Oracle database version, we could construct the following pie chart. 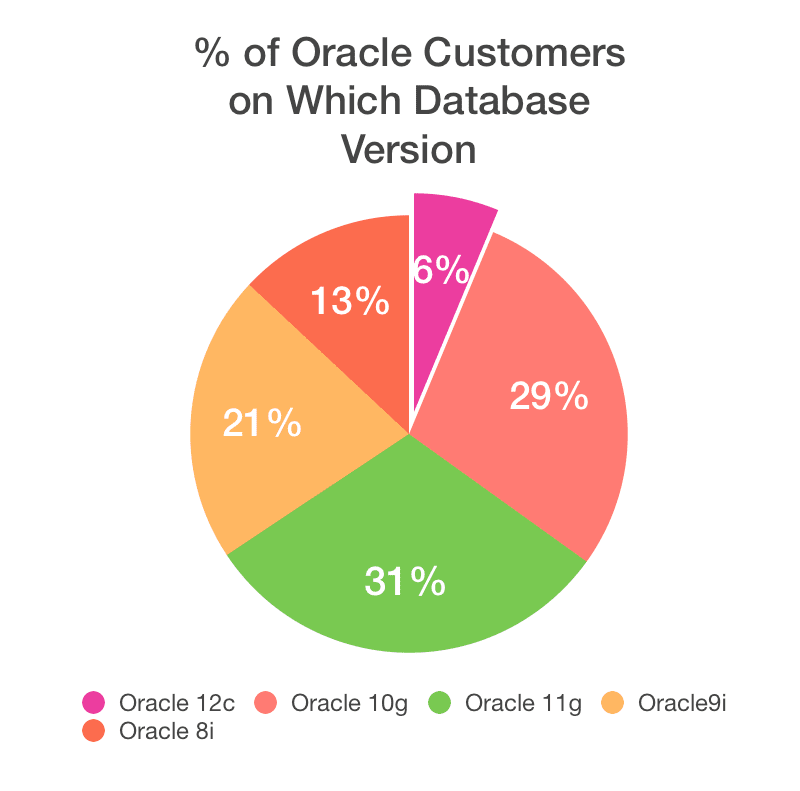 Overall, roughly an insignificant 6% of Oracle customers have migrated to the most recent version of the Oracle DB.

The question is why.

Our observation is that the Oracle database has become overly bloated in its most recent versions. Most companies do not need the extra functionality or the extra bloat and expense involved with Oracle 12c. For example, Oracle 12c adds a column store, which was put in place to combat SAP HANA, but which there is little use for in the database, as we covered in the article How Accurate with Bloor Research on Oracle In-Memory?

Implications of the Slow or Stunted Migration

The evidence is that a minority of customers have shown any interest in migrating to Oracle 12c, even though it was released in 2013. It also means that each successive release of the Oracle database is less capable of migrating the customers on the previous versions to the latest versions of the database. This means that Oracle is discussing its database features at conferences and in the IT media that their installed base by in large does not see.

This has several important implications. And they are as follows:

The Usage of Open Source Databases

When Oracle discusses their database, they nearly always discuss the most recent version. The standard Oracle sales tactic is to state that only the Oracle DB has (insert in the ____ ) functionality. This is often stated by Oracle about HA (High Availability) or RAC (Clustering), even though these functionalities are, in most cases, better and more efficiently deployed from the virtual machine instead of the database layer. Secondly, some of the functionality, such as those in the Autonomous version of 18, does not work. We covered this separate topic in the article How Real is Oracle’s Autonomous Database?

Other areas of functionality have a low overlap with the primary Oracle customer market. For example, Oracle 12c offers multitenancy as a main new area of functionality. However, SaaS vendors primarily use multitenancy, which are less likely to be customers than companies that use the Oracle database internally. The shallow penetration of Oracle illustrates this into the startup market, as we covered in the article How Appealing is the Oracle Global Startup Ecosystem?

Beyond these topics, most customers do not agree with Oracle that they need the most up-to-date features that the more recent databases provide. Oracle would have a challenging time explaining this if it was brought up in discussion. Oracle representatives state that they know their customers very well and that they have the best RDBMS in the world, and that they know how to develop their RDBMS to meet the needs of customers. Given that the vast majority of Oracle DB customers are not running anywhere near the more recent versions of the Oracle database indicates one or several of these assertions are not true.

To determine the extent to which a high percentage of Oracle customers are using versions from years ago, we have compiled the following table.

Year of the Database Version Introduction

Year the database version was introduced.
Go to top

What is the Proper Comparison of Open Source Databases to Oracle?

Open-source databases are easy to upgrade and have no license or support liability. This means that when customers compare open source options, the comparison most of them would need is to compare the 2003 version of the Oracle DB (10g) to the 2019 version of PostgreSQL or MariaDB.

Why is this the proper comparison?

Because this is the version that the Oracle DB customers are most often using; however, this framework is nearly never used when discussing the Oracle database. Invariably the discussion switches back to the most recent Oracle database version.

Secondly, Oracle’s newer or more advanced database functionality is increasingly in direct competition with virtualization technology. Our view on Oracle’s approach is that they are stuffing their database with functionality that does not belong in the database in the vast majority of cases. Oracle does not have effective virtualization technology. Oracle VM is very poorly thought of and very infrequently used.

Secondly, virtualization is a primary strategy deployed to reduce the number of CPUs necessary to run the same number of database licenses. Therefore, as Oracle prices their databases per CPU, they have a built-in financial incentive to push CPU utilization down, not up. In part because of this, most of what Oracle has done to its customers is to provide inaccurate information about virtualization, even questioning companies’ legal right to perform software partitioning full stop when there is nothing in any of Oracle’s contracts that denies this right.

The support question regarding Oracle (that is, should companies continue with Oracle support or look for other alternatives, including taking support internally) and applies more to companies that use the Oracle database rather than the database along with the applications.

This is the multiple of the initial license paid per database version since its initial purchase.
Go to top

This table shows the multiple of the initial license price that has been estimated to be paid by customers since the software was purchased, and what percentage of the customers (roughly speaking) have paid this support money to Oracle over the years. For Oracle 10g, a typical customer would have paid 3.75 times the license cost in support if they purchased the database version around the software release in 2003.

Two factors would reduce this multiple, and this is the deployment of 3rd party support and the second being companies that bring Oracle support internally.

If this estimate is roughly correct, then Oracle still has at least 91% of the overall support market for Oracle support. Oracle does little to improve its acquired applications, and Oracle customers are not purchasing the most recent versions of the Oracle database.

This means that every year that passes, Oracle Support becomes an increasingly wasteful proposition. Support is being paid on items where the bulk of development is at least ten years old. Any software vendor would love to collect support revenues on stable old applications into perpetuity.

Oracle Consulting Partners can be useful suppliers if the objective is to perform work in line with what Oracle wants the customer to do. However, as soon as the objective contradicts what Oracle wants, the Oracle Consulting Partners become a liability because they lack any independence from Oracle. They lack the right to provide information contrary to Oracle’s views, even if they wanted to.

A lack of independent advice from Oracle Consulting Partners is a particular problem as many customers seek to reduce their Oracle exposure. Oracle repeatedly scores as the vendor that customers would most like to minimize their exposure to in the future in every survey of this type.

The vast majority of Oracle customers do not believe that the more recent versions of the Oracle database are worth the time, effort, or expense to migrate. This topic has garnered very little attention in the IT media as Oracle funds most IT media entities in the form of paid placements and advertising. One must “run the numbers” to see the degree to which the Oracle customer base is diverting from Oracle’s roadmap.

The Oracle database’s compelling value and its differentiation are in significant decline. This has led many companies to avoid or at least postpone the most recent versions of the Oracle database. Still, in most cases, they have not taken the second logical step, which is to cut ties with Oracle support and begin migrating in earnest to other databases.

Because not moving to the later versions of the Oracle database is a simple matter. 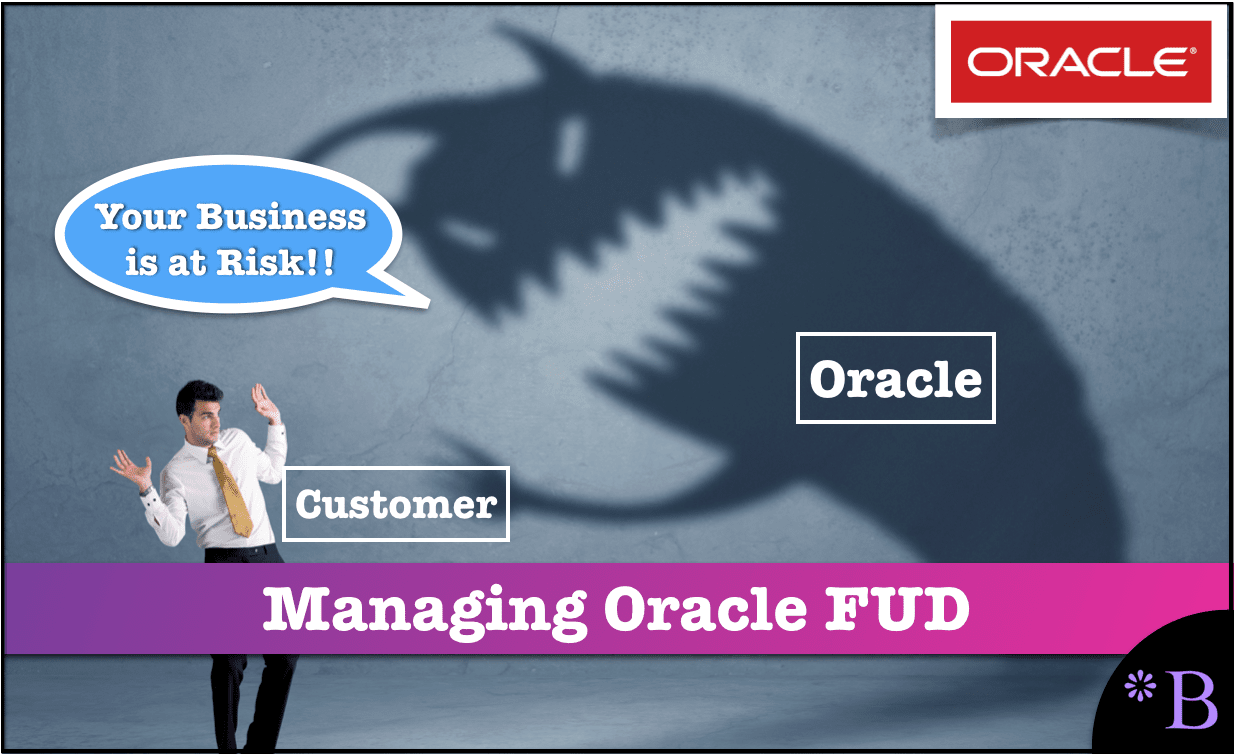 Moving off of Oracle and Oracle Support is a much more complicated affair than not upgrading the database.

Oracle uses fear tactics against its customers that any divergence from using Oracle support puts the business at risk.

How Oracle Responds to a Potential Support Contract Loss

How Oracle will respond when a company tries to save money on Oracle support.
Go to top

Moving away from Oracle Support is a perceived risk that requires a great deal more investigation by customers than simply not upgrading the Oracle database. And part of that analysis requires fact-checking claims made by Oracle that have no other objective other than maintaining their high margin support business.