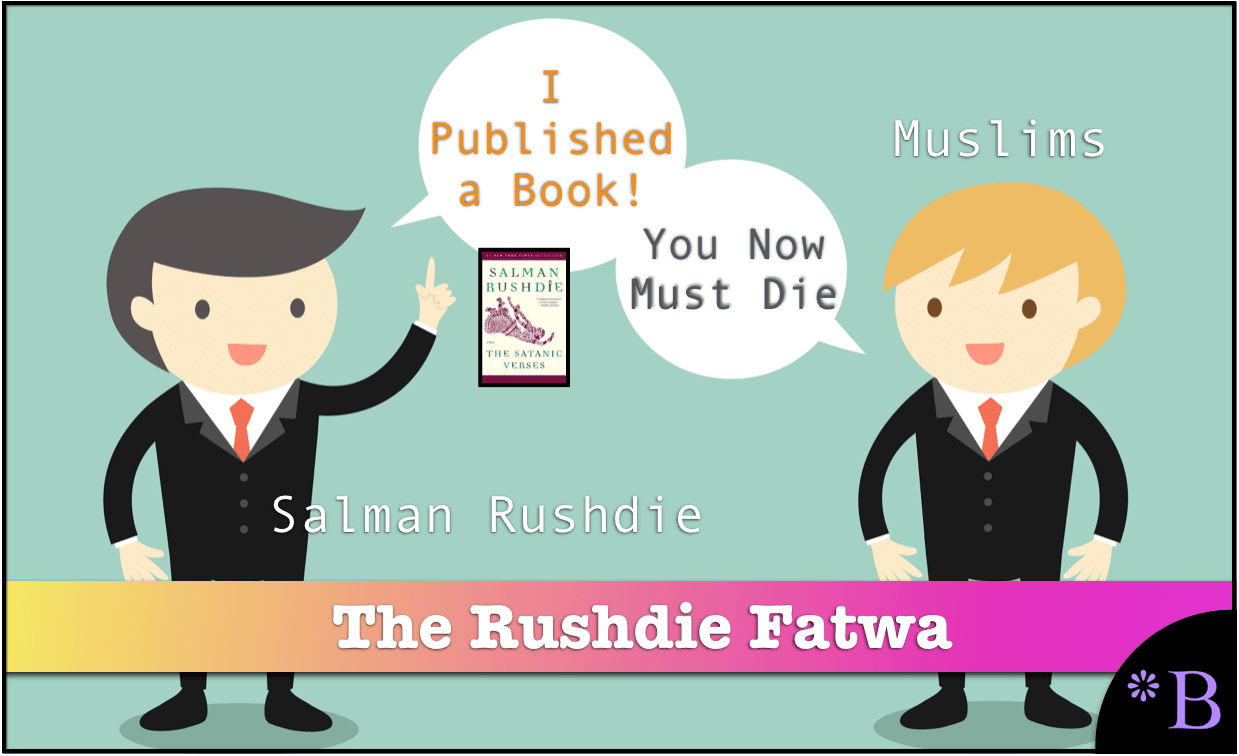 Islam is vehemently opposed to freedom of speech. The fatwa against Salaman Rushdie was a perfect example of this. However, it seems to have been a relatively forgotten event.

The Background of the Satanic Verses Controversy

It is very interesting how the controversy began. This is explained in the following quotation.

The title refers to a legend of the Islamic Prophet Mohammad, when a few verses were supposedly spoken by him as part of the Qur’an, and then withdrawn on the grounds that the devil had sent them to deceive Mohammad into thinking they came from God. These “Satanic Verses” are said to have been revealed in between verses twenty and twenty-one in surah An-Najim of the Qur’an,[14] and by accounts from Tabari, but are seldom mentioned in the first biography of Mohammad by Ibn Ishaq. The verses also appear in other accounts of the prophet’s life.

The phrase Arab historians and later Muslims used to describe the incident of the withdrawn verses was not “Satanic verses”, but the gharaniq verses; the phrase ‘Satanic verses’ was unknown to Muslims, and was coined by Western academics specialising in the study of Middle Eastern culture. The story itself is not found in the six Sahih of the sunni or the shiite sources, so much so that Muraghi, in his commentary, says: “These traditions are undoubtedly a fabrication of the heretics and foreign hands, and have not been found in any of the authentic books”.

According to Daniel Pipes,[18] when attention was drawn to a book with this title, “Muslims found [it] incredibly sacrilegious”, and took it to imply that the book’s author claimed that verses of the Qur’an were “the work of the Devil”. – Wikipedia

This explains that Muslims did not consider the translation between gharaniq versus to satanic verses. The point was that Mohammed needed to recant this revelation because it was undermining his credibility with his followers. Therefore Mohammed stated that he had received a false revelation or a revelation from Satan pretending to be Allah. Therefore, there is nothing blasphemous about calling the verses Satanic.

But outside of this, there were many other areas of the book at Muslims found offensive.

According to McRoy (2007), other controversial elements included the use of the name Mahound, said to be a derogatory term for Muhammad used by the English during the Crusades; the use of the term Jahilia, denoting the ‘time of ignorance’ before Islam, for the holy city of Mecca; the use of the name of the Angel Gibreel (Gabriel) for a film star, of the name of Saladin, the great Muslim hero of the Crusades, for a devil, and the name of Ayesha the wife of Muhammad for a fanatical Indian girl who leads her village on a fatal pilgrimage. Moreover, the brothel of the city of Jahilia was staffed by prostitutes with the same names as Muhammad’s wives,[19] who are viewed by Muslims as ‘the Mothers of all Believers’. – Wikipedia

Muslims Respond by Losing their Minds

By October 1988, letters and phone calls arrived at Viking Penguin from Muslims, angry with the book and demanding that it be withdrawn.[10] Before the end of the month, the import of the book was banned in India, although possession of the book is not a criminal offence.[10][27]

In Britain, on 2 December 1988, 7,000 Muslims in the town of Bolton staged the first ever demonstration against The Satanic Verses.

The City of Bradford gained international attention in January 1989 when some of its members organized a public book-burning of The Satanic Verses, evoking as the journalist Robert Winder recalled “images of medieval (not to mention Nazi) intolerance”.

In the United States, the FBI was notified of 78 threats to bookstores in early March 1989, thought to be a small proportion of the total number of threats. B. Dalton bookstore chain received 30 threats in less than three hours.[citation needed] Bombings of book stores included two in Berkeley, California. In New York, the office of a community newspaper, The Riverdale Press, was all but destroyed by firebombs following the publication of an editorial defending the right to read the novel and criticizing the bookstores that pulled it from their shelves.[31] But the United Kingdom was the country where violence against bookstores occurred most often and persisted the longest. Two large bookstores in Charing Cross Road, London, (Collets and Dillons) were bombed on 9 April.

In the United States, it was unavailable in about one-third of bookstores. In many others that carried the book, it was kept under the counter. – Wikipedia

Finally, a fatwa calling for Salaman Rushdie to be murdered was issued.

We are from Allah and to Allah we shall return. I am informing all brave Muslims of the world that the author of The Satanic Verses, a text written, edited, and published against Islam, the Prophet of Islam, and the Qur’an, along with all the editors and publishers aware of its contents, are condemned to death. I call on all valiant Muslims wherever they may be in the world to kill them without delay, so that no one will dare insult the sacred beliefs of Muslims henceforth. And whoever is killed in this cause will be a martyr, Allah Willing. Meanwhile if someone has access to the author of the book but is incapable of carrying out the execution, he should inform the people so that [Rushdie] is punished for his actions. - Rouhollah al-Mousavi al-Khomeini.

I recognize that Muslims in many parts of the world are genuinely distressed by the publication of my novel. I profoundly regret the distress the publication has occasioned to the sincere followers of Islam. Living as we do in a world of many faiths, this experience has served to remind us that we must all be conscious of the sensibilities of others. – Comments by Salaman Rushdie

The imperialist foreign media falsely alleged that the officials of the Islamic Republic have said the sentence of death on the author of The Satanic Verses will be retracted if he repents. Imam Khomeini has said: This is denied 100%. Even if Salman Rushdie repents and become the most pious man of all time, it is incumbent on every Muslim to employ everything he has got, his life and wealth, to send him to Hell.

If a non-Muslim becomes aware of Rushdie’s whereabouts and has the ability to execute him quicker than Muslims, it is incumbent on Muslims to pay a reward or a fee in return for this action.

In Britain, the Union of Islamic Students’ Associations in Europe issued a statement offering its services to Khomeini. Despite incitement to murder being illegal in the United Kingdom,[40] one London property developer told reporters, “If I see him, I will kill him straight away. Take my name and address. One day I will kill him”.

Although British bookseller W.H. Smith sold “a mere hundred copies a week of the book in mid-January 1989”, it “flew off the shelves” following the fatwa. In America it sold an “unprecedented” five times more copies than the number two book, Star by Danielle Steel, selling more than 750,000 copies of the book by May 1989. B. Dalton, a bookstore chain that decided not to stock the book for security reasons, changed its mind when it found the book “was selling so fast that even as we tried to stop it, it was flying off the shelves”.[75][76] Rushdie earned about $2 million within the first year of the book’s publication,[77] and the book is Viking’s all-time best seller.

Where Was The Book Sold

it was never published or even sold in the countries where most Muslims lived; and was a work of fiction—a demanding, densely written novel unlikely to appeal to the average reader.

Muslims See the Book as Anti-Islamic

Unfamiliarity with the concept of free speech. The belief among many Muslims in or from the Middle East is that every country “has … laws that prohibits any publications or utterances that tend to ridicule or defame Islam”.[99] It followed that permission to publish a book that ridiculed or defamed Islam showed an anti-Islamic bias in those countries that permit publication.

The view of many Muslims that Britain, America and other Western countries are engaged in a war against Islam and what might on the surface appear to be the product of the imagination of an individual iconoclast author was actually a conspiracy on a national or transnational scale.

Another major supporter of Rushdie, Christopher Hitchens, said that the fatwa persuaded him that Islamic fundamentalism was an urgent menace, and later wrote God Is Not Great, a polemic against religion.