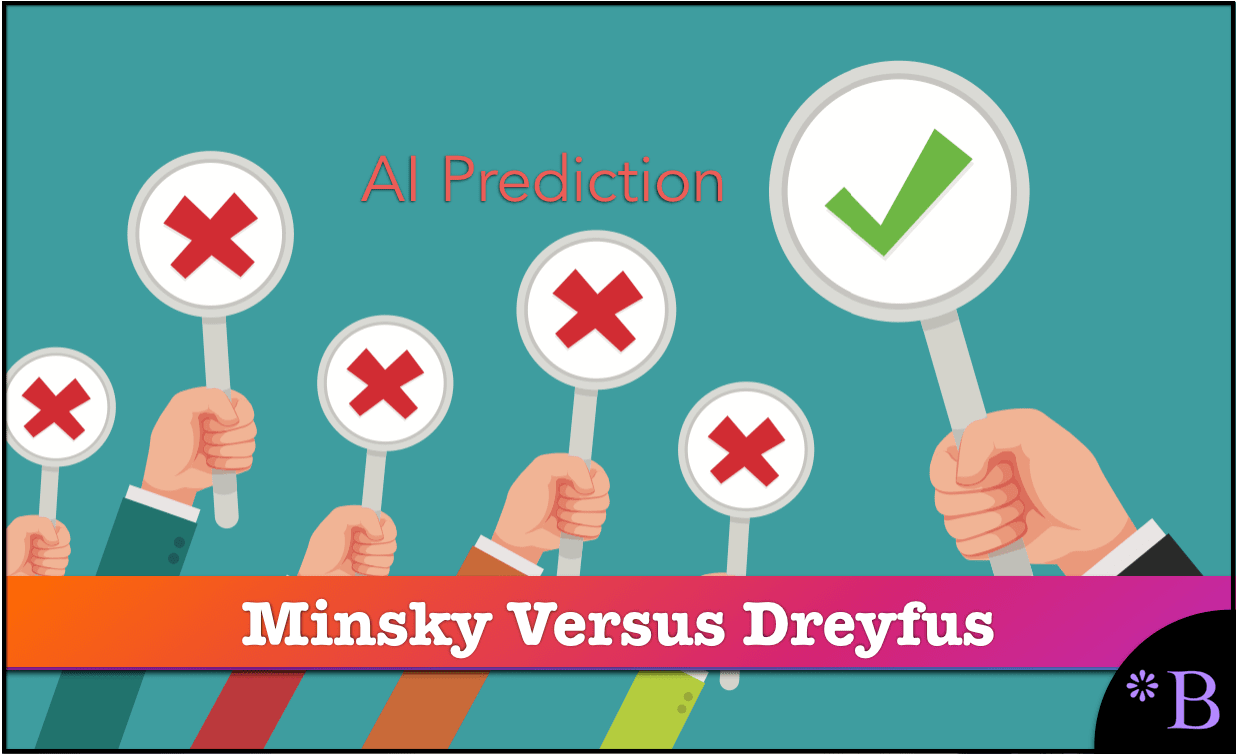 The field speaks in great deference to AI originators like Marvin Minsky. However, to our surprise in reading the book What Computers Can’t Do, initially published in 1972, its author Hubert Dreyfus pointed out the exaggerations of the pioneers of AI 48 years ago.

The Effect of the Book What Computer Can’t Do

The book was moderately influential when first published, but often pushed aside by AI proponents who did not like the book’s message. Secondly, this book has received little notice in the current AI bubble, even though it still has applicability.

It has been proposed that Dreyfus would have been listened to if the presentation of his ideas had been less forceful.

I am not so sure.

As a researcher who fact checks claims by vendors, I have found that the particular tone or presentation, while generally a non-issue, becomes an issue as soon as the orientation switches from promotion to criticism. For every person who draws a paycheck from a vendor, or works for a consulting company that promotes the vendor’s products to obtain billing hours. At the same time, they may enjoy the criticism of vendors against which they compete, there is no way that an argument against their offering can ever be considered legitimate. This is particularly true when the debate is public, such as on LinkedIn or other public forums, where either their employer or vendor ecosystem individuals can observe their reply.

Another issue around Dreyfus’ book in terms of receiving more attention is that in an attempt to be thorough, and in being written with academic language, the book is difficult to read. There are many parts of the book that while the author is attempting to be thorough is tedious. And those that would put in the substantial effort required to read his book will mostly work in AI. And they will naturally have a financial bias against accepting the arguments proposed by the book.

Dreyfus on the Continual Promise of AI Proponents

The Fallacy of Critical Mass

Dreyfus discussed what we would call the fallacy of critical mass. This is what Dreyfus is describing that more and more computation eventually leads directly to consciousness.

As he says. The brain did not do it by reaching a critical mass. This is quite true. Human brains evolved from though an enormous number of transitory organisms that eventually far back included a tiny worm. Just going back to when we broke off from the common ancestor with Chimpanzees is 7 million years.

The brain did it in some evolutionary way and we better spend out time not imagining what is going to happen when we reach “critical mass” about which we know absolutely nothing. (instead) We better do neuroscience and see if we can figure out how the brain does it operating at a snail’s pace.

This gets to a core topic.

Mathematicians dominate the field of AI. The assumption though nearly all of the discussions around AI is that the pathway to consciousness is a function of mathematics and computation.

This has already been proven wrong since AI first arose a subject of research. However, it has not seemed to bend the focus of AI away from mathematics and computation. Time and again, AI has lived off of promises rather than delivering on promises.

From, Towards Data Science.

What AI Has Promised, and What it Has Delivered

What they have promised is consciousness, and what they have delivered is ever more sophisticated rules-based systems. Much like how Watson was able to look up single term answers to Jeopardy! questions, Watson can find much more information than any human. But if you ask Watson

You will get a listing of coffees, not an answer to what it tastes like.

AI is marked by the expertise coming from a narrow area of study, namely mathematics. One assembles the data to train the model, then one has the model and creates new derivatives of the model or algorithm. Innovation in the field surrounds trying various categories of models. However, if the answers to AI all come from mathematics, how is it that Dreyfus, who was not a mathematician or AI researcher or practitioner was able to out predict the most highly regarded AI researchers and practitioners in the field?

Dreyfus proposes that biology, namely neuroscience, is the field to study to make progress in understanding intelligence, as we are modelling intelligence of biological systems.

If Dreyfus’ book were read and understood, one wonders how effective the false claims by AI promoters would be today. Today (in 2020) we have an enormous number of people working in venture capital and writing AI articles using quotes from AI companies trying to raise money or sell AI software, but without themselves understanding what AI is AI’s history, what are the different categories within AI, and overall the ability to see and penetrate AI claims.

Hubert Dreyfus died in 2017, (and was an active reaching professor until a year before his death) but he lived long enough to witness this current AI bubble.

How Correct Was Hubert Dreyfus in His 1972 Critique of AI?

AI is so “bubbly” that it harkens back to the .com bubble.

This is expressed in the following quotation from a different source.

“Some dot coms had good ideas and matured into strong, successful companies. Most did not. In too many cases, the idea was simply to start a company with a dot com in its name, sell it to someone else, and walk away with pockets full of cash. One study found that companies that did nothing more than and .com, .net, or internet to their names more than doubled the price of their stock. Money for nothing! The same thing is happening now with artificial intelligence.

In 2017 the Association of National Advertizers chose “AI” and the Marketing Word of the Year.” – The AI Delusion

..ambitious promises still remain common, for everything from medicine to driverless cars. More often than not, what is what is promised does not materialize.

Despite this history of missed milestones, the rhetoric about AI remains almost messianic. Eric Schmidt, the former CEO of Google, has proclaimed that AI would solve climate change, poverty, war and cancer.(emphasis added)

Sundar Pichai claimed that “AI is one of the most important things humanity is working on…more profound than..electricity or fire.”

Henry Kissinger speculated that the risk of AI might be so profound that ‘human history might go the way of the Incas, faced with a Spanish culture incomprehensible and even awe-inspiring to them.” – Rebooting AI

Dreyfus ended up being correct about the problems that researchers would encounter in trying to develop generalized intelligence. All of the gains in AI have been narrow weak-AI applications. And today, there is very little research, comparatively going into generalized intelligence, with most effort going into neural networks, which again are narrow applications that were something that Minsky generally opposed as he explained in his book Perceptrons with Seymore Papert.

There is little fact checking in the area of AI, Data Science, Big Data. This allows vendors to make any claim they want and for them to be required to provide little to no evidence. The term AI itself has little meaning, as every AI project uses something more specific than the term AI. Therefore the term is designed to virtue-wash what is being used.