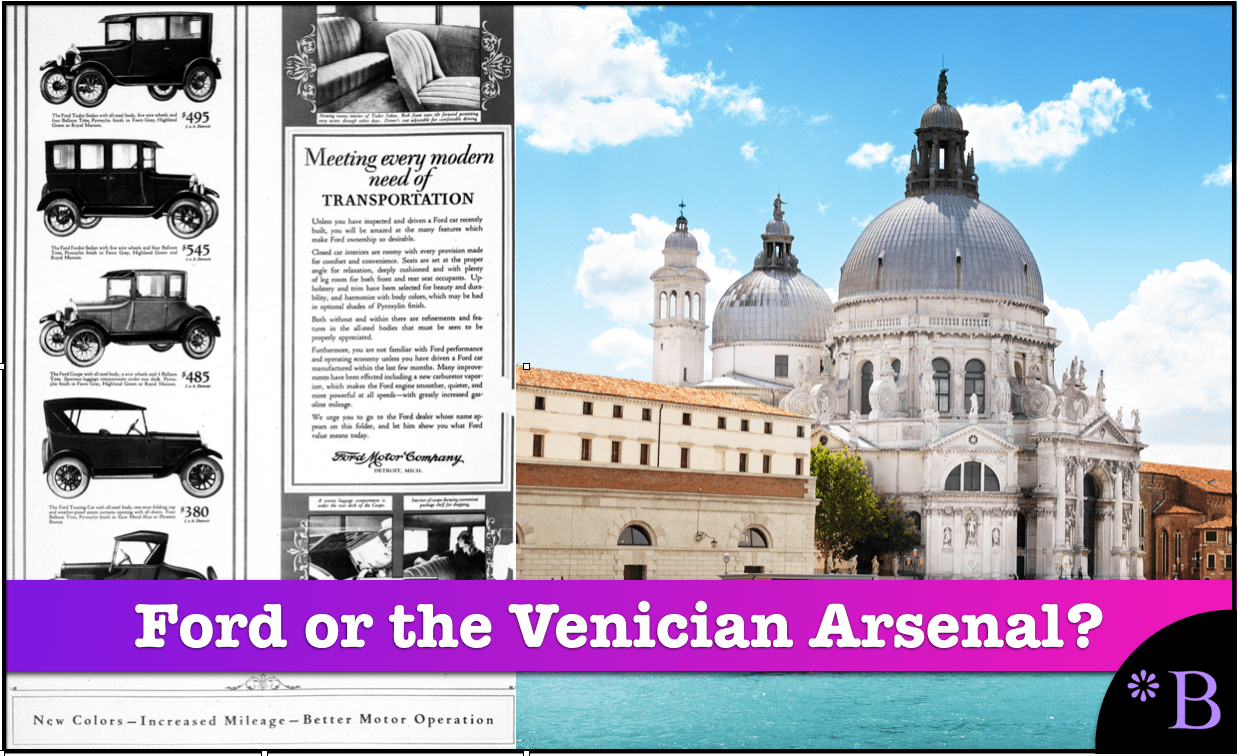 The official story which is often repeated is the Henry Ford innovated the assembly line and brought the first mass-production system to the practice of manufacturing. I have always found this story a bit too neat and straightforward to believe entirely. Some of the descriptions of Henry Ford and his assembly line are not correct because the assembly line concept was not invented by Ford, because Ford copied it from other automotive manufacturers that he visited in and around Detroit.

What he is credited with is operating the assembly line concept with high-efficiency, probably higher than wherever he picked up the concept. This is stated by Wikipedia in their article on Mass Production.

“Ford’s contribution to mass production was synthetic in nature, collating and improving upon existing methods of sequential production and applying electric power to them, resulting in extremely-high-throughput, continuous-flow mass production, making the Model T affordable and, as such, an instant success.

Although the Ford Motor Company brought mass production to new heights, it was a synthesizer and extrapolator of ideas rather than being the first creator of mass production. The following paragraphs touch on precursors from prior eras. Ford extended the assembly line efficiency with custom machines that were systematically arranged.”

Ford’s Position in Innovation of the Production Line

Ford was also innovative in that he, recognizing that the work on a fast-moving assembly line is stressful and tedious, increased the pay so that his workers were some of the highest-paid in automotive manufacturing and jobs in his factories was competitive and considered desirable. It should also be said that there is no evidence that Ford paid more money to his workers so they could buy cars. That seems to be appealing, but a false spin on the fact that his assembly line workers were paid well. It should be noted that business history is not particularly reliable. The Henry Ford story has been repeated innumerable times and is a vast oversimplification of the history of the assembly line. As for motivations, there too those who are successful often have the money to put out information with a positive spin or hire personal biographers to pretty up the past. For instance, the fact that Henry Ford was an innovator in manufacturing is much more frequently quoted than the fact he was a pen pal with Adolf Hitler.

I say this to emphasize that business historians need to be reviewed with some extra skepticism and fact-checking when compared to historians that cover other areas. This is a problem because many business books provide a history of various things, but the fidelity to what happened is low. For instance, I have found many inaccuracies with the presentation of Toyota by some business writers so that the consensus view of Toyota and their manufacturing success is quite warped and divorced from the actual history. Some things which would not play very well; for instance, Toyota’s factories are highly unionized and have been expunged to meet the expectations of book buyers.

This is described in this article.

Does the Ford Story Hold Up?

If we broaden out the interpretation of what is said about Ford’s innovations, there are other parts to the story about Ford being first that do not hold up. And in fact, in the past several years while reading through various books on history, I seemed to repeatedly come across production processes that were in place many hundreds of years before Ford’s “invention” that appear to meet the definition of not only mass production but even of the assembly line.

The earliest powered assembly lines were powered not by engines, but by windmills in Europe. Europeans had surprisingly sophisticated systems with multiple belts bringing and taking the product away from multiple workstations.

I came across another contradiction to the official Ford storyline this time in Wikipedia while reading their entry on mass production. It turns out that as early as 1100, Venice (which was its city-state at the time, as a unified Italy that we know did not exist) had a shipbuilding capability called “The Venice Arsenal” that produced an average of one ship per day. It was called an Arsenal most likely because they not only built ships there, but also guns, and of course, the military vessels were also outfitted with guns from the Arsenal.

The Scale of the Venice Arsenal

The Venice Arsenal’s history is quite interesting, and I have included just a few of the interesting features of the manufacturing facility below. I think the scale of the Arsenal would surprise most people today. The Venetian Arsenal would be considered the Ford River Rouge plant of its day. While The Venetian Arsenal had 16,000 workers at its height output, River Rouge had 100,000 in the 1930s.

“Venice themselves also mass produced ships using prefabricated parts and assembly lines many centuries later earlier. The Venetian Arsenal apparently produced nearly one ship every day, in what was effectively the world’s first factory which, at its height, employed 16,000 people.

The Arsenal produced the majority of Venice’s maritime trading vessels, which generated much of the city’s economic wealth and power, lasting until the fall of the republic to Napoleon’s conquest of the area in 1797. It is located in the Castello district of Venice, and it is now owned by the state.”

Interestingly, the location was producing ships continuously (at different levels of production) for close to 800 years.

“The Venetian Arsenal’s ability to mass produce galleys on an almost assembly-line process was unique for its time and resulted in possibly the single largest industrial complex in Europe prior to the Industrial Revolution. The Arsenal’s amazing capacity for production was rare in a time when “most of Europe had no manufacturing abilities more efficient than the guild system, the slow and tradition-bound way craftsmen had of passing on skills to their sons or apprentices while monopolizing production and sale of craft pieces in a given region…”

Why Was the Arsenal not Copied?

An interesting question arises as to why, and why the Arsenal was not very much copied even though it was operated for such a long period.

“The Venetian Arsenal was not the mass production facility that it was to be until about 1320 with the creation of the Arsenale Nuovo. The Arsenale Nuovo was simply a larger and more efficient version of the original.”

So the Venetian Arsenal was improved and extended some 300 years after its initial construction.

“The Arsenal often kept up to 100 galleys (that is a ship) in different stages of production and maintenance, that way once a galley was launched another could be immediately put into the finishing stages of production. The layout of the Arsenal itself was modified to enable minimal handling of materials during the stages of production. The Arsenal also saw the use of standardized, interchangeable parts. Perhaps the most revolutionary aspect of the Arsenal was its employment of the moving assembly line. The galley itself, through the use of a canal, was moved along during its stages of construction, allowing the galley to be brought to the materials and workers, instead of the materials and workers going to the galley itself. This remarkable feature of the Venetian Arsenal was not seen again until the early 20th century when Henry Ford “invented” the modern assembly line.”

Here we have a waterway as the assembly line. Again, I do not recall the many assembly lines that I have found in various historical books, of course, including the Arsenal’s assembly line mentioned in manufacturing books. However, it is not that hard to find.

“Venice’s wealth and power rested in her ability to control trade in the Mediterranean. This would not have been possible without an extremely large navy and merchant force. By 1450, over 3,000 Venetian merchant ships were in operation, both as supply ships for Venetian merchants and as warships for the Venetian navy. This amazingly large amount of ships required constant maintenance and outfitting. The Venetian Arsenal was not only able to function as a major shipyard, but was also responsible for these routine maintenance stops that most Venetian galleys required. This required a large amount of money and the Venetian government spent almost 10% of its income on the Arsenal.”

Therefore, the Arsenal was of critical importance to the military and economy of Venice and was a major consumer of the national income. This made sense, as Venice was a trading society and would need one of the great commercial and military fleets of the world to support its trading empire.

Production Line Versus the Study of Production Scheduling

A second question that naturally arises is when did production scheduling begin to become a studied topic.

We will borrow a quote from a book on Scheduling by Michael L Pinedo.

“Scheduling is a decision-making process that is used on a regular basis in many manufacturing and service industries…the resources and tasks can take many forms. The resources can be machine s in a workshop, runways at an airport, crews at a construction site, processing units in a computing environment, and so on. The tasks may be operations in a production process, take-offs and landings at an airport, stages in construction project, executions of computer programs, and so on. Each task may have certain priority levels, an earliest possible starting time and due date.” – Michael Pinedo

“Scheduling is a such a broad area, that I found this description of a research paper interesting: Television networks sell advertising slots to clients by the shows on which the commercials air. The networks determine the exact location in the show that a commercial will air at a later stage, usually close to the air date of the show. There are several criteria the networks must meet in scheduling commercials in a show. The schedule should be such that no two commercials promoting competing products from different clients air in the same break. The audience ratings tend to be higher at the start and end of a commercial break than during the middle of the break.” – Operations Research – Vol 52 pp 337-345

What this highlights is the universality of the application of scheduling.

When Did Research into Scheduling Occur?

According to the book Heuristic Scheduling Systems by Thomas Morton and David W Pentico, while broad research into scheduling took place in the 1950s, it was not until the roughly 1970 that scheduling became popularized with the Japanese at the lead, but using primarily non-computer techniques such as Kanban to manage factory production efficiently. Morton and Pentico further propose that software designed for one type of scheduling problem, can not be readily adapted to other scheduling problems. This would be opposed to forecasting solutions that can generally be adapted between clients and situations more readily.

A Historical Perspective on the Development of Production Scheduling

Two of the most influential people in production scheduling was Frederic Taylor and Henry Gantt. Frederic Taylor created planning as a separate group from execution (an issue many companies still have not mastered), and Henry Gantt developed the famous Gantt chart, which serves as the basis for the graphical interface of production scheduling software. Perhaps not coincidentally, Taylor and Gantt worked together in the 1030s at significant steel plants in the US as consultants.

It is clear that there were many opportunities to copy the mass production of the Venetian Arsenal between 1100 and the time of the engine-powered assembly line. Still, it seems that many of these opportunities were not taken advantage of. This is a common feature of history before the development of modern communication systems that innovations in one area of the world would often take a great deal of time to spread or not spread at all. The timeline below shows this for the diffusion of mathematical techniques. 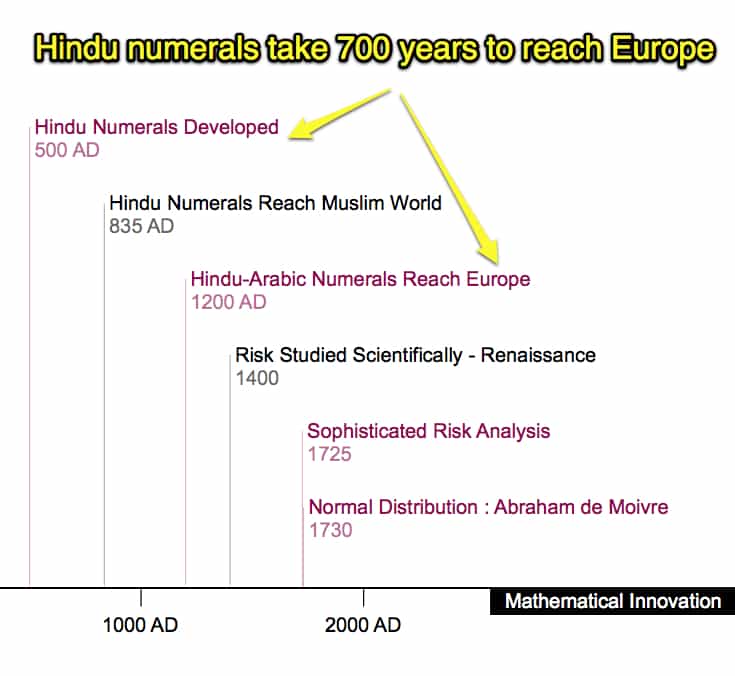 The study and publication of production scheduling is a far more recent phenomenon than who first began using an assembly line.