China has given the world a pandemic that is causing massive dislocations around the globe. The Chinese government has proposed that the virus was brought to China from the outside, and has been involved with covering up the virus, making them a menace to the world. However, China has been a menace to the countries that deal with them in many ways. Now is the time to evaluate what is the cost versus benefit of dealing with China.

The stated idea was that even though China was a totalitarian state, eventually with trade, this would change. It has not changed, and now the Western countries have helped build China up to a superpower, at least economically, but one with no press freedom, no internal freedoms, no human rights laws, etc.. 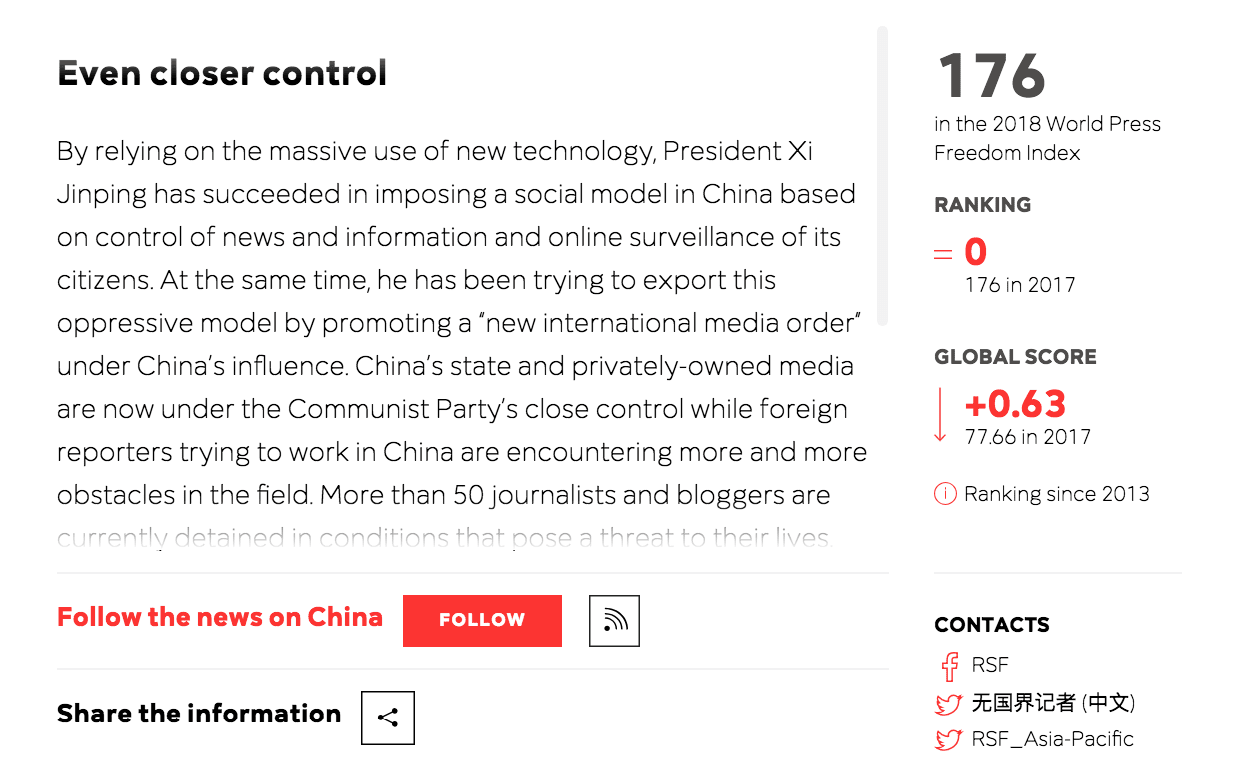 China scores only a few positions up from North Korea in press freedom. People that said China would liberalize, and that capitalism directly caused companies to become more open, have been 100% wrong about China.

China is a country without any developed building codes, labor standards, or environmental standards. Yes, US multinationals outsourced their manufacturing to China, knowing precisely the pollution implications. Now China is highly polluted. Elite Chinese now buy citizenship in other countries as they see that China is unsustainable. The elite Chinese have no intention of pushing for regulation of the industry in China. Instead, they plan to use their money to immigrate to European based countries, and to continue to run their polluting sweatshops from the safety of their European based residences that do have regulations.

China has become a toxic hellhole. This pollution will not just stay in China, but counts against the global pollution load. A significant factor in the low cost of Chinese manufacturing is non-existent environmental regulations.

Chinese workers are treated like slaves or robots by elite Chinese. This also reduces labor standards in countries where job losses have occurred.

Chinese culture is all about labor exploitation and extremely comfortable with sweatshops. Chinese have set back manufacturing labor standards in Italy and now run so many sweatshops that, according to Italian officials, it is difficult to keep up.

The Coronavirus did not appear in China through coincidence. China has a long term cultural problem with practicing modern hygiene, and much of the population does not believe in germ theory. Germ theory took a long time to gain acceptance in Western societies as well.

Chinese officials had been trying to close the Wuhan wet market, as it was aware of the hygienic risk, but it was not accomplished due to corruption.

These issues are explained in the following quotation.

Whilst not yet ­confirmed, it is thought that the source of the coronavirus (Covid-19) was a ‘wet market’ in Wuhan, China, which also illegally sold live animals which were butchered on the spot, usually with the same implement being used to despatch different species.

This practice poses a high risk of viruses jumping from animals to humans as the hygiene standards are effectively compromised. The original source of the current virus is thought to have come from bats which, although not on offer at the Wuhan market, may have infected live chickens or other animals which have then entered the human food chain.

Many commentators believe that it will not be easy, however, citing a report by the Chinese Academy of Engineering, sponsored by the government, which estimated that China’s wildlife trade was worth more than $17 billion and employed more than one million people.

Nevertheless, since the outbreak in December last year nearly 20,000 wildlife farms have been closed down or put under quarantine in an attempt to limit, and or extinguish, this cruel trade. – Edinburgh News

China and Chinese people think they have the right to make counterfeit copies of virtually anything. The idea that products contain some intellectual property that was developed by other people does not appear to mean anything to the Chinese.

Scamming as a Culture

China is a scamming culture, much like Nigeria, with entire cities or towns based around running scams.

Countries that think that developing relations with China is good for the economy should think twice. Secondly, given what we know about China and its cheating and low standards, and IP theft, why is any country reaching out to China? Companies are having their IP pilfered because the leadership within those companies is so shortsighted that they don’t appear to care about the long term consequences.

Relations with China as a Liability

Even without the virus, becoming a sister city with China, as described in the video, is a shortsighted proposition. China wants to bring manufactured products made in slave-like conditions to Germany. This is just like the US partnership with China, which is a war on the US middle class and is one of the things that has taken our income inequality back to the Dark Ages.

Chinese immigration has been terrible for Italy and has to lead to sweatshops to rise in Italy, with everything being backward engineered, putting many Italians out of work. China looks like a society that is intent on taking advantage of every other society with which it comes into contact.

China deflects any blame to other countries and uses accusations of racism to cover for its actions. There is no criticism that China will accept. It believes it can do anything with impunity, and any country or individual that critiques them is racist. However, China, on the other hand, can blame any country, without evidence, and that claim is something they expect to be accepted.

China makes the elites in China, and outside of China, wealthy. However, it has devastating effects on the populations of both China and countries outside of China. Governments that have any type of industrial policy should reconsider what they are getting from China versus what China is taking from them.

This virus is only one of the many negative things with interacting with China. China is not only authoritarian; they are socially primitive. They have no concept, for example, of non-animal cruelty. Everything is around how we should be accepting of them, but accepting of what? The core of the culture is objectionable and seeks to take advantage of everyone, be it copying IP, stealing IP, using its slave workforce against the middle-class workers in Western countries, etc… We now know more than enough to see how the Chinese have behaved and intends to behave in the future.

This is a great time to look at the logic of the trade relations and immigration policy towards China.