Muslim men often associate women who dress in western style as being sexually available. In the beginnings of Islam, conquered sex slaves would dress in revealing clothing and uncovered. Meanwhile, respectable women would be far more covered.

Classical Islamic law allowed men to have sexual intercourse with their female slaves. Legal and literary documents show that those slaves used for sexual service were differentiated at slave markets from those who were intended mainly for domestic services. These slave girls were called “slaves for pleasure” (muṭʿa, ladhdha) or “slave-girls for sexual intercourse” (jawārī al-waṭ).

Slave women did not veil and like prostitutes were exempt from a lot of the gender restrictions upon upper-class women. While free women were regulated by higher standards of modesty, most Islamic jurists stated that female slaves were not required to cover their arms, hair or legs below the knees. Some did not require them to cover their chest either. – Wikipedia

Item #1: The Real Reason for Covering Women in Islam

Observe the western women asserting that women wearing covering that are designed to keep them from being considered a sex slave or prostitute is promoted as diverse and positive.

There are a number of videos from the western liberal media source that try to whitewash the reasons for the hijab and burqa. These videos lie to western audiences by never telling them the logic behind covering women.

It is truly cringe-worthy to see modern media try to present various coverings as “a choice” and “completely normal.” What is left out of these types of presentations is that these coverings are related to the husband owning the genitals of the wife, and as his property, these coverings stop other men from looking at his property.

What is left out is that women are pressured and sometimes beaten if they diverge from wearing such coverings. It is not simply a matter of “choice.” In Saudi Arabia, morality police are able to beat women to diverge from the dress code.

Item #4: Testimony from a Woman With Stockholm Syndrome

These women appear to be wearing something from the bed section of a store. Muslims would like this type of dress to be considered entirely normal and modern even. Opposition to this type of dress which erases a woman’s identity is called “Islamophobia.”

The idea that only a few inches of a woman’s body can or should be viewed is a testament to Islam’s primitive nature. The more Islamic the country, the more coverage is involved.

The Debate Over the Hijab, Burka and the Burkini

In Europe there have been debates over female coverings, and in each circumstance, allowing the covering of women is presented as tolerant, and something that women “chose to do.” 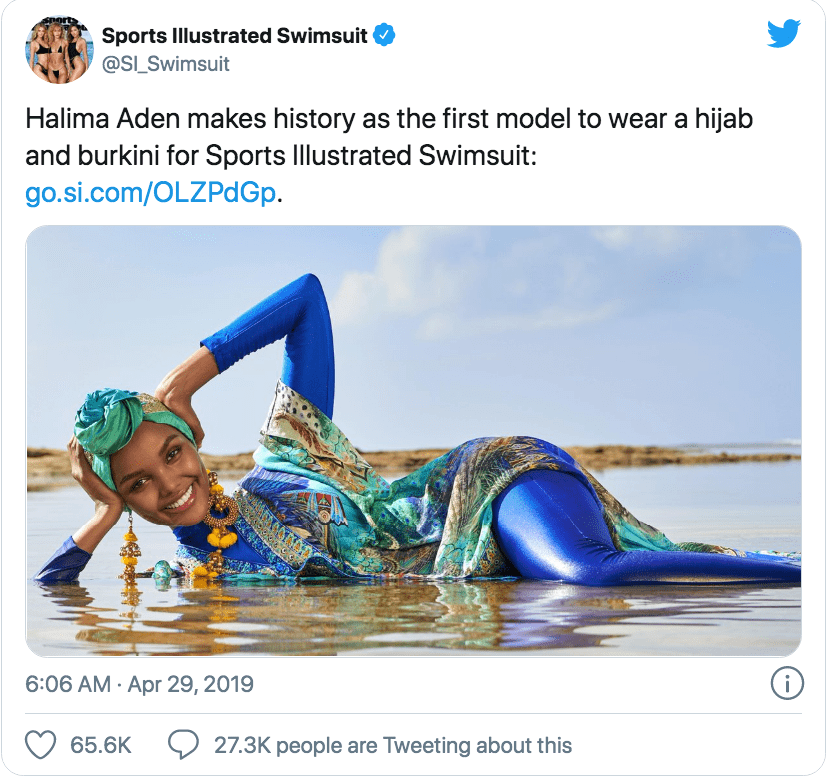 Sports Illustrated presented the burkini as a positive thing for the swimsuit calendar.

Yasmine Mohammed explains the problem with this.

At home I was taught that, and nine years old, I needed to wear a hijab to protect myself from men who wanted to molest me.

This is an interesting statement. How can it be that child molesters are so common that every 9-year-old girl needs to wear a hijab? Yasmine Mohammed grew up with a Muslim family in Canada.

From my society, I learned that’s called victim-blaming. At home I was taught that good, pure, clean girls wore hijab and filthy, loose, despicable girls did not. (emphasis added)

From my society, I learned that was called slut-shaming. Given the choice between those two worlds, I eventually chose to break free. I’m grateful that unlike Aqsa Parvez, a teenager from Mississauga, my family were not able to follow through on the threat to kill me for removing my hijab. I was able to escape with my daughter. But where have I escaped to? I have escaped to the upside down. The society that that I fled to seems to have been a mirage. Instead, I find myself in a world where the very things I escaped from are being fetishized by western corporations like Gap, Mattel, Nike and now, most recently, on Sports Illustrated.

Why are we suddenly celebrating religious modesty culture? Isn’t that the very thing feminists have been fighting against for centuries? How is it now suddenly something positive? There is a general lunacy (emphasis added) in the free western world celebrating religiously prescribed clothing, but a specific lunacy in the Swimsuit Edition of Sports Illustrated doing it. Imagine if that were an Amish woman in her prairie dress and bonnet … it’s beyond parody. But you never see Mormon underwear on the Victoria’s Secret runway. You never see any other religious clothing being fetishized like the hijab and to such a nonsensical degree.

They do not understand that the hijab is not benign cultural clothing like lederhosen or a kilt (women from hundreds of different cultures that have no relation to each other wear it) — it is religious.

It is prescribed by fundamentalist Muslims. In some countries girls cannot go to school unless they wear hijab.

Across the world, if women try to remove it, they can be abused, imprisoned or even killed. There is nothing benign about it.

Despite the fact that it is a tool of misogyny seeped in oppression that perpetuates rape culture, every woman should be free to wear it. – Toronto Sun

This answer to all of this is the western media that support this normalization of religious dress does not understand that clothing that covers women in Islam is prescribed, or the reason it is prescribed. And they listen to Muslims to tell them false information about coverings being entirely voluntary on the part of the woman.

Yasmine Mohammed, who grew up Muslim, and provides more context as to how the hijab is oppressive and often enforced on women against their will.

In this video, the Apostate Prophet contradicts the claim that the hijab is voluntary on the part of women in Muslim countries. The Koran is not asking for women to volunteer to wear the hijab, it specifies exactly who women are allowed to show themselves to. The Apostate Prophet explains that once something is prescribed in the Koran, it is an obligation for Muslims to follow this.

These are the insults written by Muslims who have responded to a woman who took off her hijab. Observe the depth of insults of the statements and that in addition to an enormous number of personal attacks but also that she should die. The idea that removing a hijab should lead to death just appears to be in a different dimension. Also, observe how Muslims appear to correlate removing a hijab with becoming a prostitute.

However, doesn’t this contradict the statement by Muslims that there is no compulsion to wear a hijab or other coverings? When westerners ask about why women hijabs or burkas or burkinis, they are repeatedly told that all women wear their coverings because it is their choice.

In this video, David Wood explains the false claims made by Muslims that hijabs are entirely voluntary in Muslim societies.

Women covered this way or in a full burqa shows women who are beaten down. Islamic countries are the most misogynistic in the world. Many Muslim societies oppose the education of women entirely, dictating that women stay illiterate. This is explained in the following quotation.

As Egyptian-American journalist Mona Eltahawy writes in a provocative cover story for Foreign Policy, misogyny has become so endemic to Arab societies that it’s not just a war on women, it’s a destructive force tearing apart Arab economies and societies. But why? How did misogyny become so deeply ingrained in the Arab world?

Some of the most important architects of institutionalized Arab misogyny weren’t actually Arab. They were Turkish — or, as they called themselves at the time, Ottoman — British, and French. These foreigners ruled Arabs for centuries, twisting the cultures to accommodate their dominance. One of their favorite tricks was to buy the submission of men by offering them absolute power over women. The foreign overlords ruled the public sphere, local men ruled the private sphere, and women got nothing; academic Deniz Kandiyoti called this the “patriarchal bargain.”

Spend some time in the Middle East or North Africa talking about gender and you might hear the expression, “My Arab brother before my Western sister,” a warning to be quiet about injustice so as not to give the West any more excuses to condescend and dictate. The fact that feminism is broadly (and wrongly) considered a Western idea has made it tougher for proponents. – The Atlantic

Some of the men in Afghanistan apparently opposed women working out in a Burqa, against Sharia.

Many Muslims see uncovered women as prostitutes or sexually available to them. And when Muslim men immigrate to Western countries, they often view Western uncovered women in this primitive way. This is because Islamic teachings are fundamentally primitive.

Furthermore, Muslims have developed an extensive history of sexual assault that is being hidden by European authorities. Islam has a very dysfunctional relationship with sex, and they are doing little to change this as they increasingly immigrate away from countries where these styles of dress are standardized, to white countries where they are not.