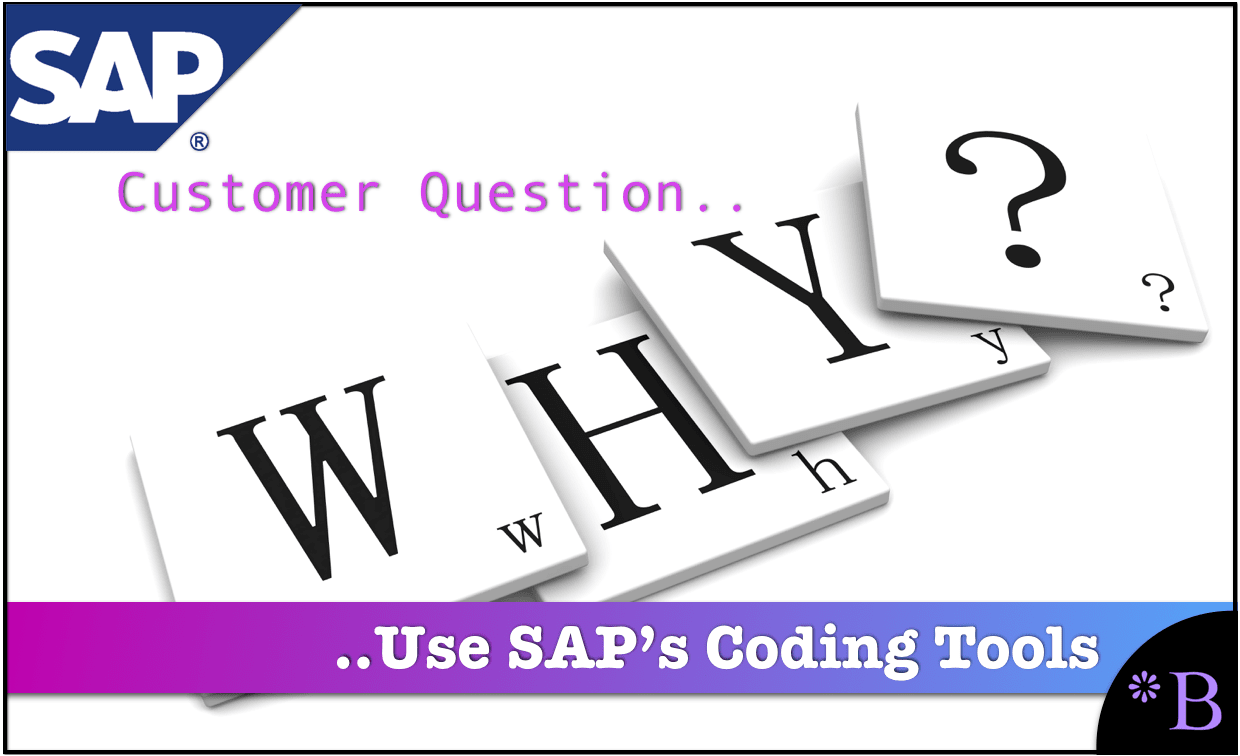 In this article, we will review a mostly unpublished area in the history of SAP. And the fact that it is unpublished brings up interesting questions about who benefited from the present state of SAP development at SAP customers.

When one talks to SAP customers and the subject turns to custom development, the discussion around ABAP, which is SAP’s proprietary coding language, ensues. ABAP has the following attributes:

But the question that is not discussed is…..

Why Was Customer Development Programmed in SAP’s ABAP?

Any programing language and any set of programming tools or development environment can be used as long as that environment/PaaS can be connected to SAP. Ten years ago, these easy connections to SAP were less common, but today they are becoming more and more available. This means that custom development can be performed without ABAP. Yet, it is still rare for this to be the case.

Some insights as to why this is the case can be found in the SAP sales process. The standard sales process and implementation process at SAP is the following:

This brings up an interesting question…

Why Use ABAP at SAP Customers in the First Place?

Let us review some foundational assumptions.

What if the customer already has development tools that it is comfortable with? What if the vendor is not offering a competitive coding environment?

Let us review the backdrop once again.

Developers I speak with who have experience with multiple computer languages often refer to ABAP as the worst computer language and the worst tools they have ever worked with. It is widely considered a massively inefficient language in which to work. That is, unless you bill hours as an ABAP developer, quite peculiarly as it happens, then those people seem to think it’s quite good.

Should SAP Even Be Using ABAP for Coding its Applications?

SAP has had significant problems in developing new applications, and one of the reasons for this lack of productivity is the overhead that ABAP imposes.

Therefore, it is bad for SAP customers to use ABAP. There is no reason for SAP to use it — except that it is a legacy for SAP as all of their internally developed applications are developed in it.

One example of this is S/4HANA. S/4HANA is SAP’s considerably delayed new version of its long-running ERP system. S/4HANA appears to be taking forever to finish. There are often 300,000 lines of code that have to be rewritten from ECC as any experienced programmer will tell you, the less efficient the coding language, the more lines of code it requires to complete a program. Yet, many people in the SAP community throw around the 300,000 lines of code quotation as if it is a badge of honor. It is also used as an excuse as to why S/4HANA is taking longer than expected. I am often told by SAP supporters that.

“rewriting 300,000 lines of code does not happen overnight.”

My response is that

“SAP should have thought about that before they the announced the product years too early.”

This is a constant feature in the SAP space. First, an exaggerated claim is made, then when the claim is exposed as false, the SAP resource admonishes the observer of the inaccuracy for their naïveté. If it were so obvious that it would take longer to complete S/4HANA, why didn’t SAP change their public statements? It seems like SAP, not outside observers, needed to be aware that it is not so fast to change 300,000 lines. And pointing out the complexity of adjusting 300,000 lines of code does not change the fact that SAP missed its deadline.

Switching to the topic of code quality, SAP has very significant quality problems in the products it has internally developed.

It is now prevalent for documented functionality not to work. This means that SAP contains a lot of broken functionality, functionality that consultants like me have to stumble upon, go back and forth with SAP support, and generally consume time to troubleshoot.

SAP support has developed a way of running you around in circles and being careful not to admit that the functionality is broken but that there must be other factors at play. I have worked with many applications, and I have never witnessed anything like the number of SAP problems from any other software vendor. The functionality problems will persist for years.

Companies have hired me to get functionality working that is also broken at several other accounts I have worked on. They hope that one “platinum” consultant can come in and fix it for them. Hope springs eternal in the SAP customer space, and every next version of the software will fix their current application problems.

For example, I found one issue related to SAP’s optimizer, which had a field that supposedly switched the processing to parallel processing. I activated this field for several years, thinking I was performing parallel processing. After testing the difference, I found that the field did not connect to anything (those interested can read the details in this article). After reviewing the development history, it turned out that it had never worked and that the field was never removed.

And that this had been the case for nine years! (however, it made little difference, I suppose, as the optimizer does not work with or without parallel processing).

There are some obvious productivity problems with ABAP. One significant and an instead visible item is that ABAP is proprietary, and the final objects created in ABAP are less shareable than if created in any nonproprietary language.

Does this sound like a development language that companies need to be adopting? Does SAP’s internal development effectiveness argue for the use of ABAP in SAP customers?

The Faulty Logic of Accepting SAP’s Proposal on ABAP

SAP is about locking customers in, and this has always been true. You can’t understand SAP without understanding that they are fundamentally about account control. Quite obviously, enlarge their control over the account stipulated that development should be performed in SAP.

But why do SAP customers so passively accept SAP’s proposal?

*As a note, the low code provider Outsystems has been infested by what is commonly known as a “Bozo Explosion,” which we cover in the article Harvard MBA Syndrome Definition (AKA Bozo Explosion). Therefore, while we had an Outsystems example here earlier, we no longer recommend Outsystems or any low code environment. Our view is that low code providers have drastically overstated the concept of the citizen coder and that furthermore, they know they are lying about this topic, as they have the first-hand experience with taking non-developers and converting them into “developers.”

The Rise of PaaS Environments

But why have SAP chosen your PaaS if all you wanted in the first place was their packaged solution?

The SAP Consulting Companies and Jumping on the ABAP Money Train

Now is the right time to move to the discussion of SAP consulting companies. Let us begin by asking this obvious question.

Did the SAP consulting companies ever contradict SAP on their proposals on using ABAP and in getting deeper and deeper under SAP’s control?

Surprise surprise, no, they did not.

The SAP consulting companies liked this approach because it allowed them also to sell SAP development resources. And because ABAP and SAP’s coding tools are so inefficient, it meant the maximal of billing hours.

oData, Dynpro, Fiori, HANA Studio, Visual Composer, HANA Cloud Platform, the list goes on. SAP is continually introducing new languages (WebDynpro, Floorplan Manager, Fiori, Lumira, BRF, etc.) almost yearly. Programmers are in constant fear of being left behind and dedicate evenings to learning these new languages. This leaves them no time to learn non-SAP stuff. This has turned into a significant downside of being part of SAP development.

Most are introduced with great fanfare. In most cases, a pollyannish book is printed by the ever willing and compliant SAP Press to help communicate to the market that whatever they have is “a thing.” Some books exist for SAP items with barely any following. There is a book on oData, which most likely has a minimal future. I am embarrassed to say that I purchased this book myself to see what the commotion was about.

And then, the development item introduced by SAP eventually declines in the marketplace.

I spoke to a UI vendor with 15 failed UI initiatives introduced by SAP in the past 17 years. After the presentation, they refused to give me the roster for publication because they feared retribution by SAP. 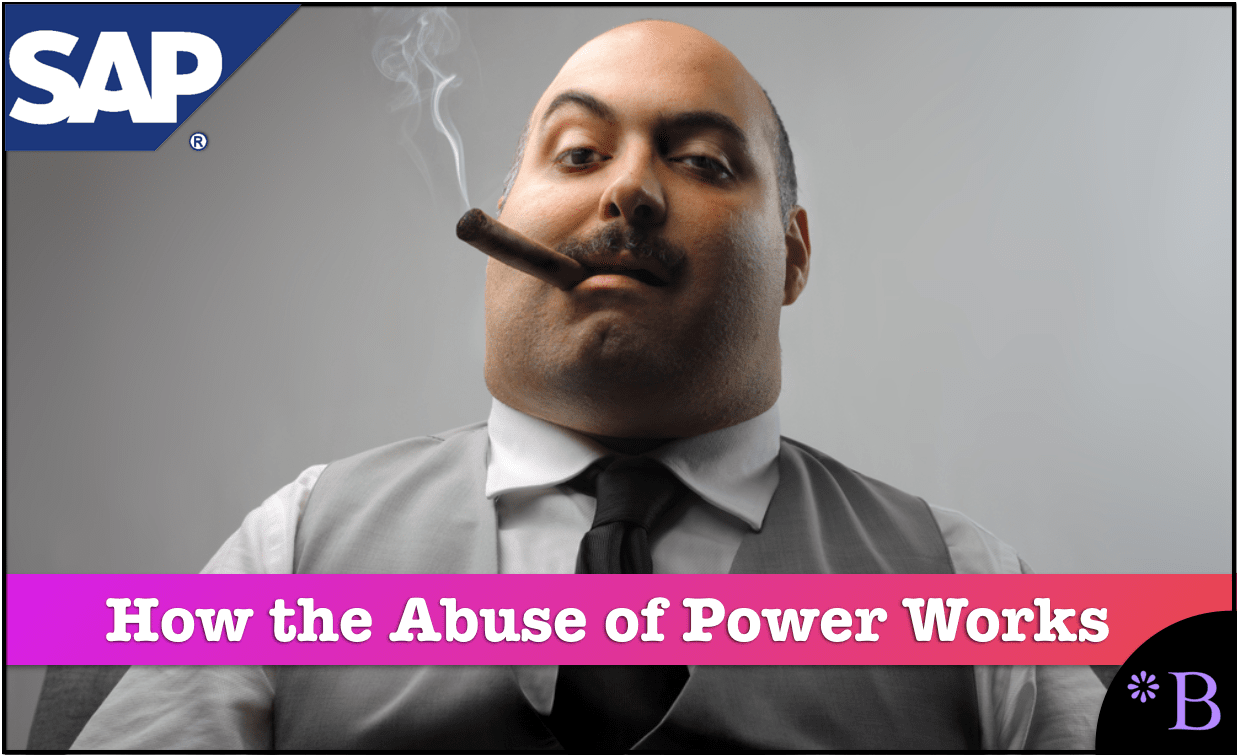 One of the most significant issues is that SAP wants to make all of its offerings closed. So they make their offerings as incompatible as they can. Everything points back to SAP. But the problem is that the efficiency of code is, to some degree, dependent upon how open it is. SAP realizes that it must restrict this openness to make its offerings SAP-centric so that the monopolistic pricing approach that SAP has ridden to great heights can continue. SAP adores co-opting new IT concepts. For example, they have tried to get into Hadoop’s space. But once again, while they talk “open systems,” their offering is something called Vora, which is a “prioritized” version of Spark — which is a data connector between Hadoop and HANA. They have been since looking for low information executives to buy it and get “into the sandtrap.” 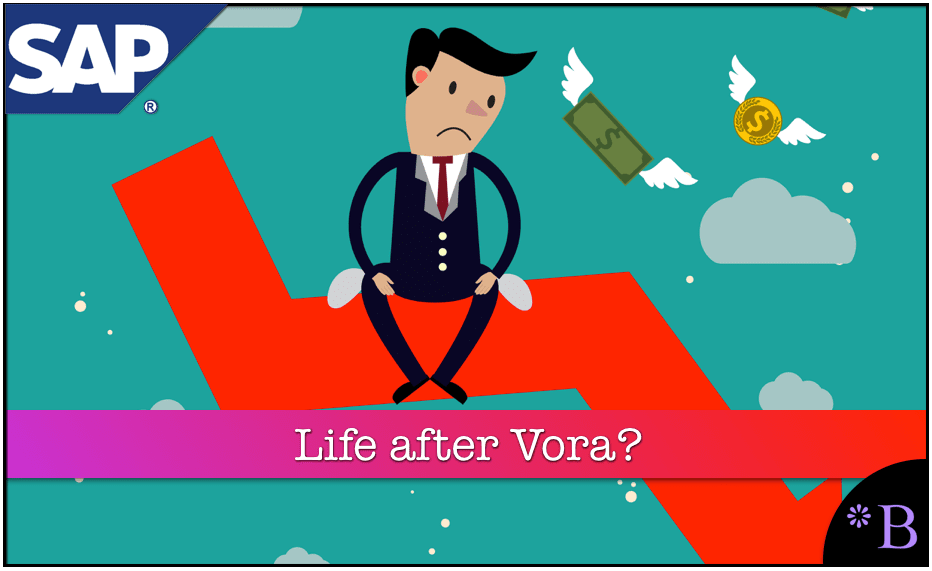 Once a company purchases Vora and connects its Hadoop instance to HANA, its Big Data project’s overall ROI will promptly nosedive. As soon as Accenture or Deloitte shows up to bring SAP skills as part of a coalition of the billing, problems begin. Do Accenture and Deloitte push Vora because it makes sense technologically? No, it is related to their profit maximization.

It was introduced with great fanfare, but in our analysis adds no value to Hadoop. SAP would like to invade the Big Data space with proprietary solutions — to parasitize a space built on open standards and then created a castle around a portion it can charge monopoly rents.

This is how SAP works and how it has always worked.

Yet, when SAP consultants talk to you, they often talk about a “golden age of SAP,” but that new developments have had SAP lose its way (pick the topic, treatment of partners, of customers, development productivity, etc..). Well, this was the way SAP has worked even back to this supposed golden age.

SAP is continually promoting new development tools, however, outside of SAP consultants who happen to be billing hours in the tool, not adopted outside of SAP, and not considered of good quality.

SAP and its surrogates bamboozled customers for decades into adopting one of the most inefficient development platforms. And while it never made any sense, it was so easy to do. You don’t have to be a developer or have a development background to figure this out. But you have to spend some time investigating this and comprehend that many of the things SAP says are merely self-serving. And of course, actually sitting and speaking with your developers — rather than spending most of your time talking to other executives is also helpful.