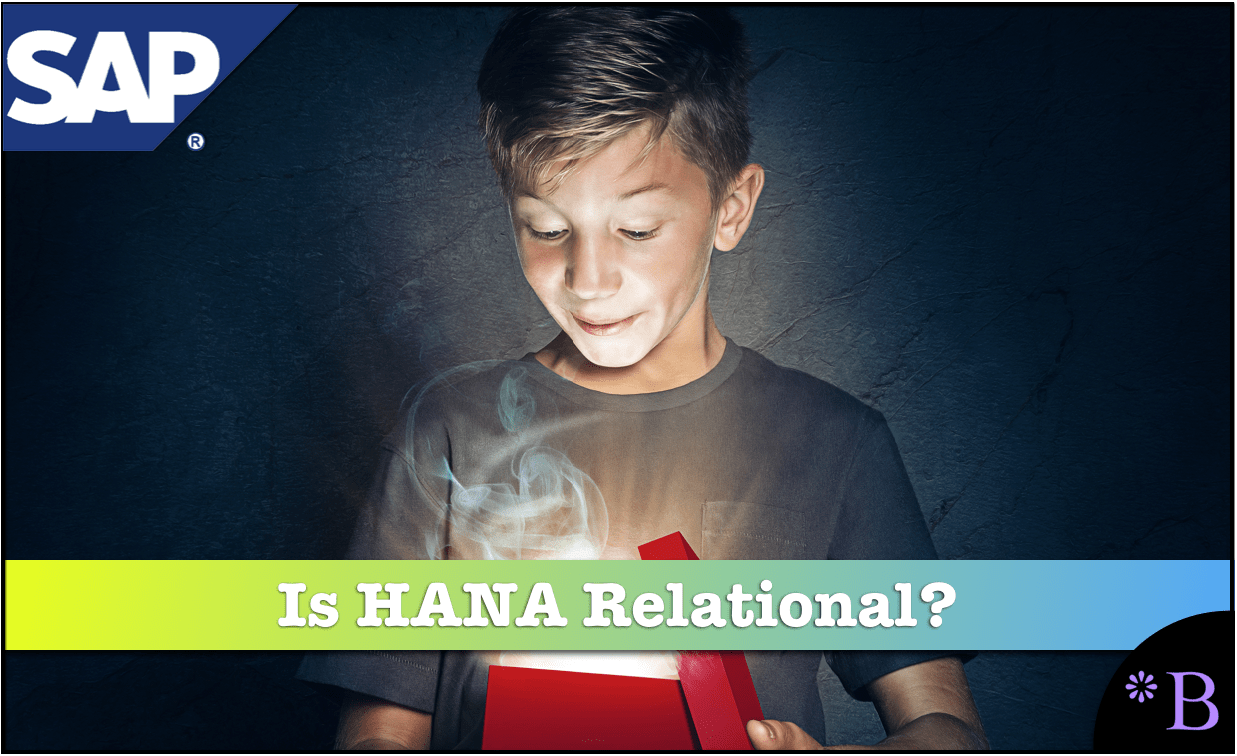 SAP has provided a strange explanation to its HANA architecture and database. As a consequence, there are a great many misunderstood topics on the SAP HANA database. One of the greatest is that the SAP HANA database is not a relational database.  SAP also stated that HANA was 100% column in design, when not only was this not true but would have made it impossible to support a transaction processing application. To explain why this is not the case, we will get into the HANA architecture. You will learn why SAP has been misrepresenting its HANA database.

HANA Architecture Changes in Hardware, Changes in Query Capability, and Changes in Table Structures with the SAP HANA Database

The data storage structure changes are that data can be stored in columns rather than as “rows.” This is a primary component of the HANA architecture. This is often stated in the literature on the topic, but it is not normally clear why this is the case. In fact, at first glance, it appears that it should be the opposite. A columnar database still has rows, but each row is only one field. It is perhaps more accurate to say that the data can be stored in columns that would look a bit like this.

There are several flaws in the conventional explanation of columnar databases, explaining why columnar databases are still considered mysterious to many people that consume the messaging on this topic. It is also why often, the hype appears to overshadow the understanding of this subject.

Relational databases can take a lot of maintenance, which is part of a database administrator’s role. Tables often have custom columns added to them, making each table less efficient for a variety of tasks.

The disadvantage of standard relational databases for analysis has been known since analytical applications have been in use and have been addressed at various points in the history of database design with data cubes.

The Use of Data Cubes

Data cubes have been utilized for a long time to speed the ability to retrieve data. Data cubes do have more overhead, and HANA architecture or a column based on a memory database generally can have many advantages over cubes, in addition to requiring much less IT overhead. Reports development is a major bottleneck in most companies. But the HANA architecture has had problems making the database dual mode, which is as good at other types of database processing other than analytics processing for which column oriented designs are optimized.

Once queries can be changed, how data is stored needs to change to leverage this shift.

Another benefit of columnar databases is that they do not lead to the unruly growth of tables. As was previously noted, many analytical tables have 100 or even 200 columns. This is because new attributes are added to existing tables over time. As each column is added, queries slow. The more columns added, the more time it takes the database to find anyone field as it must scan the entire row. Therefore table growth does directly lead to slower database queries. This is why the columnar database scales so much better than the row based design. Each new column is added to its table.

However, it should be understood that this does increase the number of tables in the database and the relationships that have to be created. Although because of less redundancy, the total amount of data that is stored is lower.

For instance, if we take the example of color if a color is not recorded at one point. And then recorded and added to the database, rows may often increase in number. What was once aggregated to a universal color is now broken into multiple colors that apply to that record.

This much depends upon the details, but several scenarios are possible.

Other Areas of Maintenance

Secondly, the column-based database has far less history on which to base support claims. This is because there are so few column based databases in use. But maintenance is not necessarily lower simply because of the HANA architecture. There are other factors at play.

What is the Accuracy of SAP’s Communicated HANA Architecture?

When HANA was introduced, and several years after SAP gave a distinct impression, the HANA architecture was 100% column-based. However, after several years, it was communicated that many of HANA’s tables were row-oriented.

Columnar databases are relational databases, as are row-based databases. A better explanation would be to call databases that store mixed data in single tables that are not organized as non-relational, but even that can be a confusing topic.

Relationships still exist with a columnar database, and in fact, there are more of them because there are now more “tables” that are each table being a column.

The SAP HANA is most definitely a relational database design.

SAP’s statements regarding lower maintenance on the SAP HANA database are most undoubtedly unproven, and while SAP can point to some technical support improvements, it is mostly guesswork. As with any columnar database, the SAP HANA architecture has some areas that are lower in maintenance than traditional databases. But other areas are higher in maintenance.

Secondly, SAP HANA is quite new and has much less history behind it than other databases likes Oracle 12C or other alternatives. Therefore it would be very premature to conclude that the SAP HANA database is lower in maintenance than alternatives.