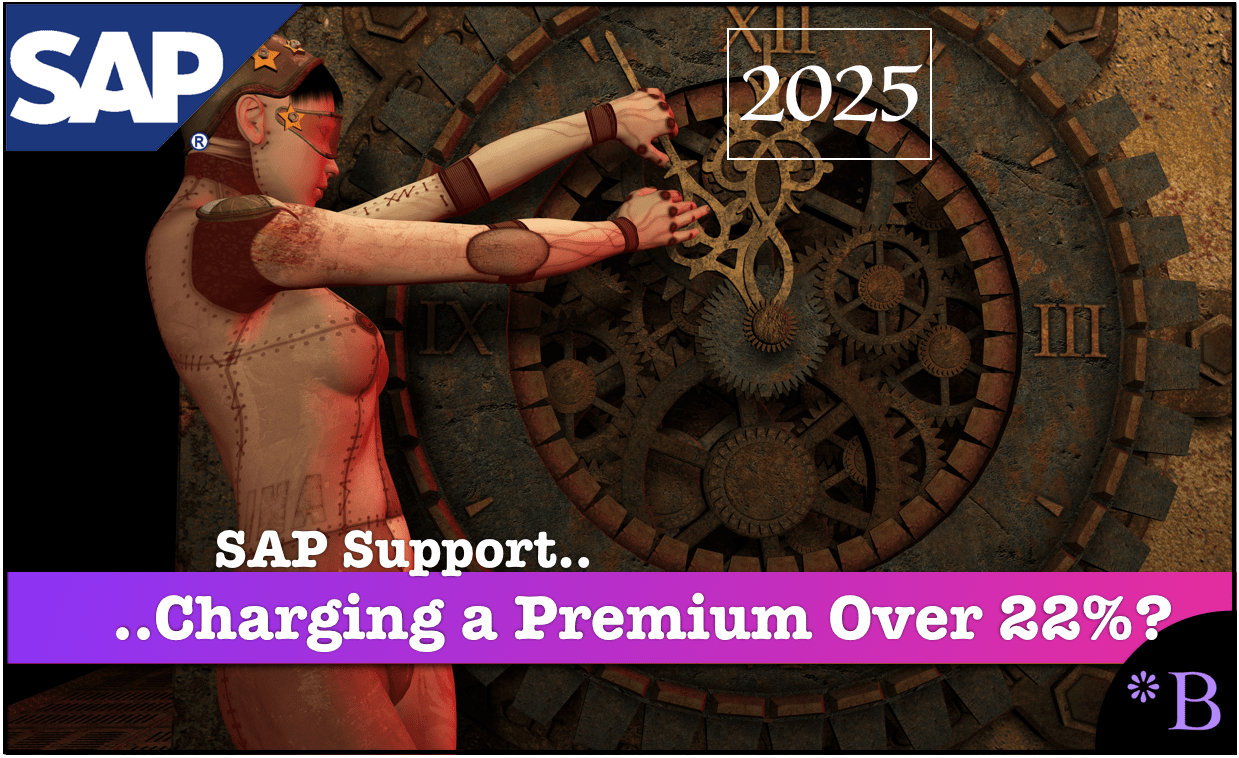 Video Introduction: Why SAP Will Charge a Premium for 2025 ECC Support

When SAP introduced S/4HANA, they violated the ECC contract’s terms by making S/4HANA what SAP’s lawyers said was the logical but not the legal successor to ECC. SAP undertook this pretense to charge customers for what should have been covered under the support contracts. SAP has told its customers that SAP will cease supporting ECC by 2025. All of this is designed to move customers along the desired SAP pathway that maximizes profits for SAP. We predict that SAP will extend this deadline past 2025 but that no SAP-associated company will explain this to SAP customers. You will see how SAP repeatedly uses these tactics to control their customers.

This tactic went without comment as nearly all of the information providers on SAP are financially tied to SAP. 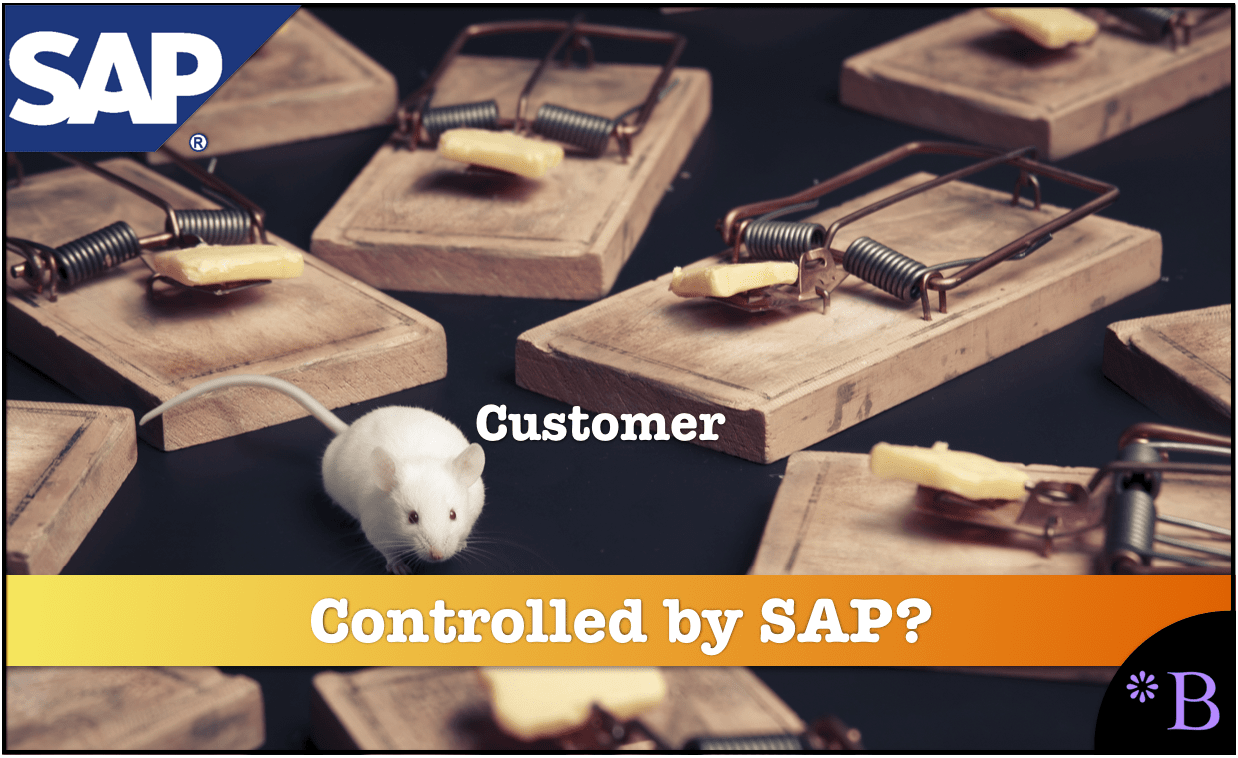 Every policy, every discount offered by SAP, every statement made by SAP has a singular objective, to maximize the amount of money that SAP can extract from their customers. SAP’s entire policy with S/4HANA and its “premium” support model for post-2025 support has this same intent.

This policy of pretending/asserting S/4HANA was not the legal successor to ECC allowed SAP to charge customers that had paid their support for ECC for S/4HANA.

SAP will most likely keep the premium adjustable per customer. So customers where SAP feels it has the leverage to push them to S/4HANA, will likely receive a higher post-2025 support premium.

Outlining the Strategy For Moving Customers Along the Desired Pathway

It has two parts.

“First the announcement under the unassuming title of: Product Note: SAP HCM On-Premise Option for SAP S/4HANA. Basically, this boils down to a choice for customers. Remain on premises for HCM provided they switch over to S/4HANA and, in doing so, get extended support through 2030 or go the SuccessFactors cloud route. Support for other HCM ERP versions ends in 2025.” – Diginomica

SAP made the following statement.

“SAP also continues to support our customers using SAP ERP HCM, our on-premise HCM solution. While an increasing number of them are migrating to SAP SuccessFactors solutions to accelerate their digital HR journeys, we also recognize that every customer journey is unique and must be undertaken at each customer’s own pace. For some SAP customers this includes a desire to deploy their HCM solution in an on-premise environment for the foreseeable future.” – Diginomica

The reason for all of this?

“The bottom line is SAP has really struggled to convince their ~12,500 SAP HCM customers to move to #SuccessFactors as the last provided info had ~600 out of the 2,000 SuccessFactors Employee Central customers coming from SAP HCM. Many of these customers understandably want some assurances that SAP will continue to support SAP HCM further out than 2025 which could have easily been provided by getting agreement to move the entire Business Suite out to 2030. Instead, SAP has decided to introduce a new licensed offering called SAP HCM On-Premise for SAP S/4 HANA that will be built by 2023 and will be based on SAP HCM so they are counting on customers trusting SAP will deliver something five years from now, being willing to do an upgrade (always painful in SAP), signing up for a new license and all of this to get virtually the exact same functionality they have today and an extension of support until 2030.” – Diginomica

Therefore, very practically speaking, SAP HCM customers are not migrating to SuccessFactors. Let us do the math. So 600/12,500 is roughly 5%. Five percent of SAP HCM moved to Employee Central. This is nearly six years after the acquisition (SuccessFactors was acquired in Feb 2012).

Therefore, the migration of HCM customers to SuccessFactors can rightly be called a failure. This brings up another question: the outcome of the SuccessFactors primarily PR related and to make an impression on Wall Street by having Bill McDermott repeatedly say “SuccessFactors” for six years.

But getting back to the support implication. SAP had to extend support for SAP HCM as nowhere near enough customers were moving.

This is a pattern of SAP.

Illumination of A Major Technique Used to SAP to Control Customers

At some point, reality intervenes. And changes are made more in the background, with SAP hoping that no one notices.

This is why it does not make sense to listen to what SAP says. SAP views its customer base as rats to be pushed down a maze. Many, if not most of SAP’s statements, are to facilitate this progress through that maze. Instead, it makes more sense to evaluate likely outcomes without worrying about what SAP says. If SAP has a large number of customers on HCM, then yes, support will be extended.

SAP is brilliant at this.

They somehow turn a flip-flop on a policy that was just a “rat through maze” statement as being customer focused.

Well, IA (which we cover in the article How to Best Understand Type 1 Versus Type 2 Indirect Access is not a “thing.” It is just a construct that SAP uses to pull money out of its customers, and because it is not real, it is not connected to any actual cost. 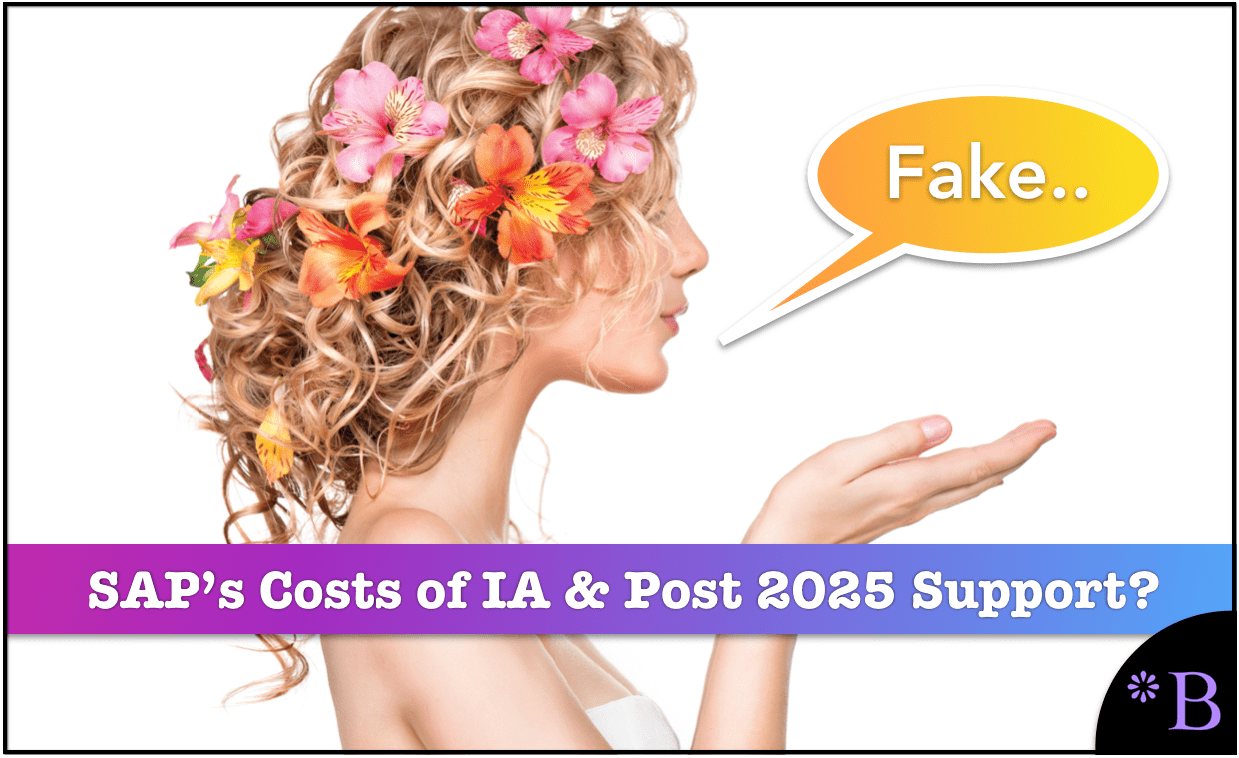 A premium post-2025 support charge is much like indirect access, and it is illusory. Therefore, it can be negotiated to be just about anything. It all comes down to either meeting SAP’s revenue objectives and making SAP feel the customer is doing what they want and following the approved pathway.

The approved pathway has nothing to do with anything outside of the incentives that are created by SAP and communicated to their sales reps.

Who Will Tell SAP Customers the Truth on Post 2025 ECC Support?

Customers can expect no helpful advice from entities like the SAP consulting partners, Gartner, Forrester, or ASUG — all who will repeat SAP talking points.

It will fall to the contract negotiation firms, those that negotiate on the part of SAP customers and have no partnerships with SAP. Any firm that has a partnership with SAP is obligated to repeat whatever SAP says.

Our Previous Prediction on The 2025 ECC Support Deadline

First, we know that SAP will have to provide post-2025 support.

So the only question is how.

Will it be charged or not charged?

SAP’s marketing department is the New England Patriots of enterprise software. Other vendors run around, scratching their heads, wondering how they got away with it.

SAP’s statements about when support should be taken with a grain of salt. Ultimately, many customers have moved away from the previously supported item that will determine when support expires. SAP has a 90%+ margin in its support business. SAP has plenty of resources to support applications for many years. But it chooses to limit support as a mechanism (or in many cases pretending to limit support) to coerce customers into moving to new products.

SAP knows that dropping support for ECC post-2025 would lead to a wholesale search for alternative support providers. Our research indicates that most SAP ERP customers will still be on ECC by 2025. SAP would not want to drive customers away from ECC support through SAP as it would lead to a vast enlargement of the SAP third-party support industry. SAP’s margin is its support, so it cannot jeopardize this income stream, as this would also mean a massive loss of margin for SAP. Support is the easiest money that SAP makes. And their threat to drop customers rings hollow — in fact, this is apparent by merely observing how SAP responds when a customer states they will not be renewing support.

As our S/4HANA Implementation Study shows, SAP is not in a position to demand a support premium for ECC post-2025. But they will likely convince many customers to hand over a premium for support regardless.