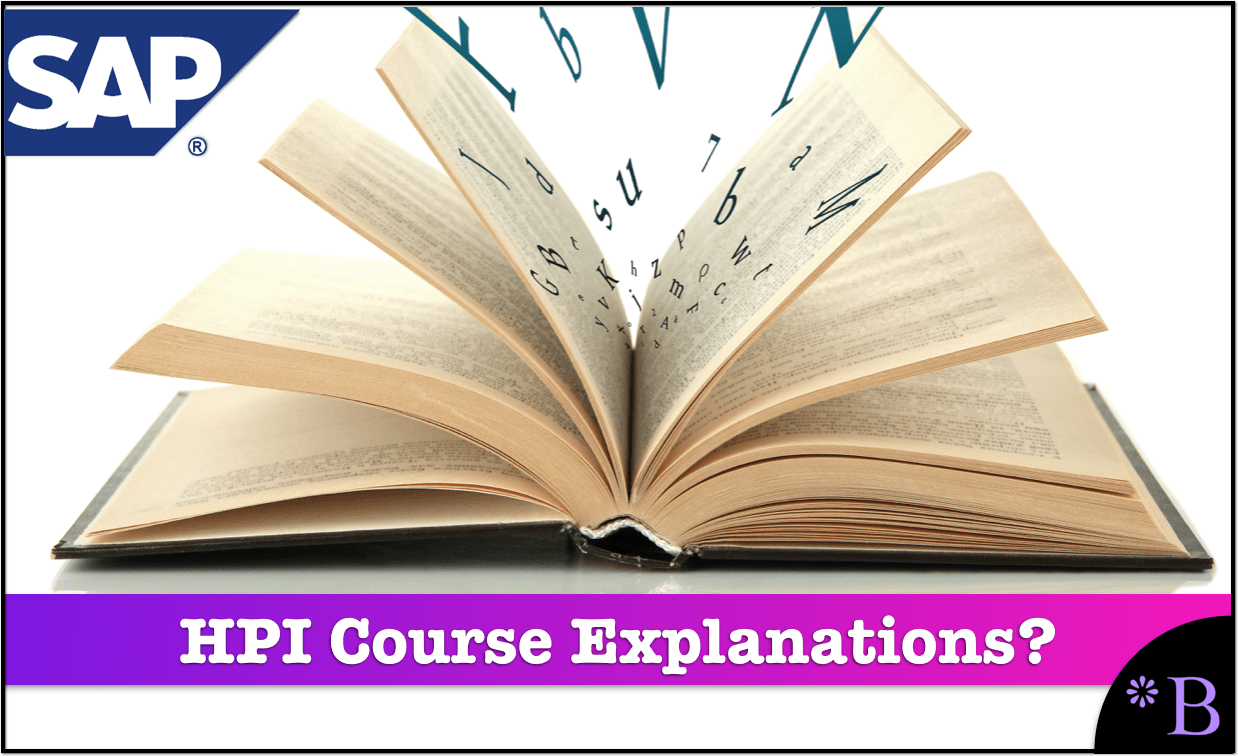 This article will analyze the accuracy of the in-memory course description offered by the Hasso Plattner Institute.

“Week 1: The first week will give you an understanding of origins of enterprise computing. It is vital to know the historic development which lead to the emergence of current hardware as we know it now in order to understand the decisions made in the past. Many characteristics of current applications, like materialized aggregates and a reduction of detail in the stored information, have their roots in the past. While these measures were helpful in former systems, they form an obstacle which has to be overcome now in order to allow for new, dynamic applications.”

It is only the Hasso Plattner Institute that thinks this is true. An aggregate is a table of precalculated values. Hasso Plattner is very much opposed to aggregates. However, the reason he gives seems to be directed around making HANA seem to be less expensive than it is. This is because HANA is alone among databases being priced per GB. Aggregates take up space in the database, but they serve a valuable purpose. Without aggregates, constant recalculation is required. Hasso Plattner has stated that this is highly advantageous, but is it? What if those values very rarely change, such as a table of weight conversions? But this table must constantly be recalculated on the fly? If not, some rule of excellence has been violated?

Hasso Plattner has stated compression values that have not been born out to be true. This is covered in the article Articles that Exaggerate HANA’s Benefits.

Most HANA accounts can expect footprint reductions in the area of 30%. However, this is immaterial to companies as storage is exceptionally inexpensive, particularly disk storage. John Appleby, SAP proponent and head of an SAP consulting company, has stated that disks are a problem because they “take up a lot of space,” which is a claim we analyzed in the article What Was John Appleby’s Accuracy on Moving BW to HANA?

“Week 2: Within the second week, the differences between a horizontal, row-oriented layout and a columnar layout are discussed. Concepts like compression and partitioning are introduced. Based on that, you will get an explanation of the internal steps performed inside the database to carry out the fundamental relational operations insert, update and delete. The week concludes with a fundamental difference of SanssouciDB to most other databases: the insert only approach. Following this concept, we circumvent several pitfalls concerning referential integrity and additionally gain the foundation for a gap-less time travel feature.”

“Week 3: The content of week 3 focuses on more advanced structures and operations within the database. The differential buffer, a means to prevent frequent resorting of the dictionaries and rewriting of the attribute vectors, is explained in further detail. Subsequently, also the merge process, which incorporates the changes from the differential buffer into the main store, is illustrated. The retrieval of information via the select statement, as well as related concepts like tuple reconstruction, early and late materialization, or a closer examination of the achieved scan speed, are also part of this week’s schedule. The description of the join operation, which is used to connect information from different tables, concludes this week.”

“Week 4: Week 4 is all about aggregation. Aggregations are the centerpiece of every business analytics application. Given that huge impact of aggregates on all parts of a business, it is of great importance to understand what aggregate functions are, why we remove all materialized aggregates and go for aggregation on the fly. You will further learn how to greatly reduce the costs of this on demand approach by using the aggregate cache and understand its connection to the differential buffer and the merge process. In the units concluding this week, you will see new prototype applications using the aggregate cache to deliver complex simulations in real time.”

With another week spent on aggregates, without any debate as to whether aggregate removal is a value-add, or worth the effort, this seems like a waste of time. Week 4 could be better spent on hiring a psychologist to analyze why Hasso Plattner is obsessed with aggregate removal (or should we say reduction, as HANA does have aggregates but does not call them aggregates).

Hasso Plattner either needs to come in and speak to our Brightwork psychiatrist to get to the bottom of his aggregate obsession. Or he needs to admit the only reason he keeps talking about aggregates is that it is a gimmick to try to confuse and sell to customers who lack an understanding of databases.

“Week 5: Week 5 sheds light on some more inner mechanisms of the database. What happens in emergency situations, when for example the power is turned off? Logging and recovery are vital parts to know in order to understand why an in-memory database is as secure as a traditional disk based one. Further, the benefits of replicas are explained. We conclude the week with an outlook onto the implications that arise with the tremendously increased speed at hands.”

HANA is far less stable than competing databases, although this is for different reasons. Are the reasons for HANA’s relative instability going to be explained in this course? Probably not.

“Week 6: Week 6 is centered on applications. The last conceptual unit is about data separation into active and passive. After that, we showcase several prototypes and sketch out potential fields to apply the technology, thereby also leaving the domain of pure enterprise solutions, by using main memory databases in weather simulations and medicine.”

The Hasso Plattner Institute’s purpose is to educate and advocate as to why everyone should buy HANA. Its courses are to create devotes to SAP’s particular approach to databases. However, there is a problem. HANA is not what Hasso Plattner or SAP says that it is. SAP has presented no evidence that HANA can outperform competing databases. This means that people taking this course are taking it from an institution started by a man who has exaggerated and unsubstantiated claims about HANA.

So the question is, why should the Hasso Plattner Institute be considered anything more than a propaganda apparatus for SAP?

SAP should spend more time trying to get HANA to meet its exaggerated claims versus trying to institutionalize or create a completely biased “HANA university” where receiving certifications or PhDs means agreeing with Hasso Plattner. It has been over six years since HANA was introduced. The only thing HANA does well is speed data warehousing query performance, but only over previous versions of competitor’s databases.