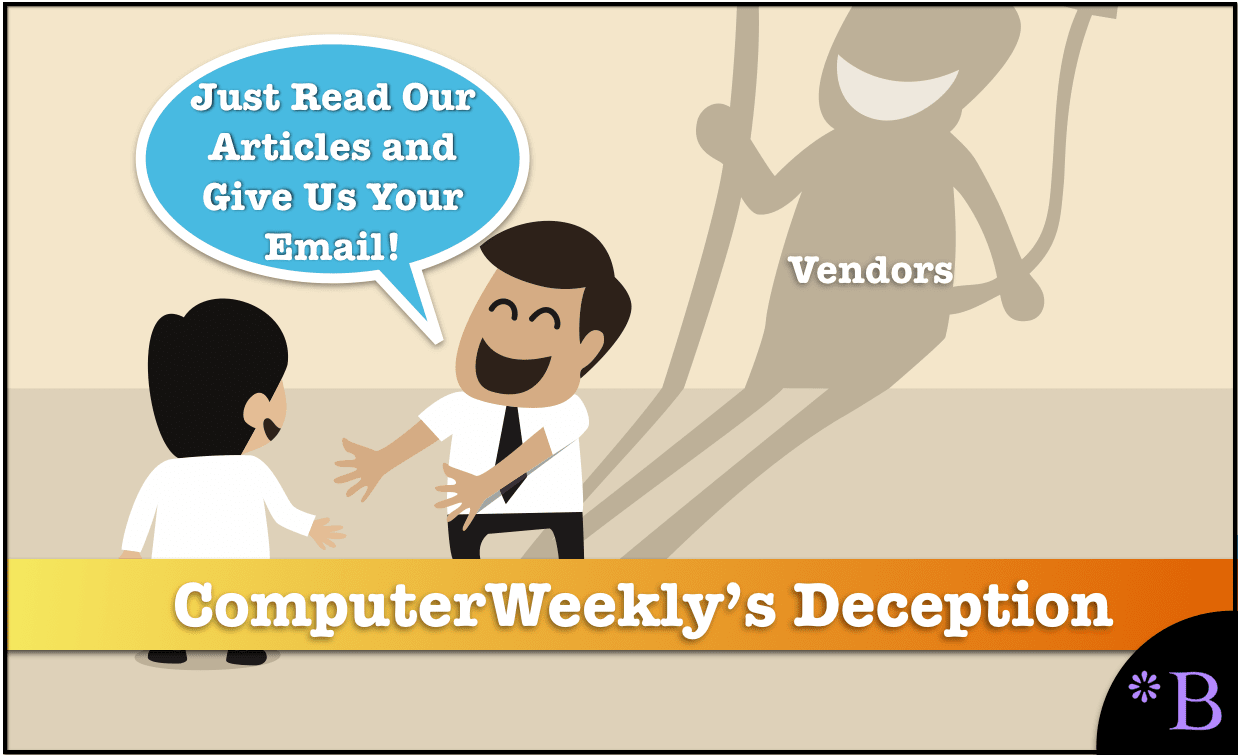 Over time we have become frustrated with the information published by Computer Weekly regarding how they cover SAP.

We decided to investigate who owns Computer Weekly. This and how they operate will be the subject of this article.

On the surface, ComputerWeekly looks like a popular technology magazine with no particular bias. ComputerWeekly churns out conventional articles that essentially repeat quotations from sources at conferences and phone calls with technology companies. There is virtually no analysis for many of the articles, so while there are authors attached to the articles, there is not much reason to use authors. Many of the articles’ intent is not to explain anything to readers but to allow the marketing departments of technology companies to reach leads.

But mixed along with this are “real articles,” such as this one.

TechTarget owns ComputerWeekly. TechTarget is a media giant, and it purchased ComputerWeekly in 2011. It owns other media properties such as LeMagIT, KnowledgeStorm, BitPipe, including others.

The TechTarget website says close to nothing about being a media entity but instead is entirely focused on marketing to businesses to help them with lead generation.

That is, ComputerWeekly looks like an online technology magazine, but that is not what its owning company looks like. Not at all.

ComputerWeekly creates content to capture information that is then passed to TechTarget’s marketing automation system. This is what technology providers pay TechTarget for so that readers, as potential buyers, can be monitored and then shared with technology companies. 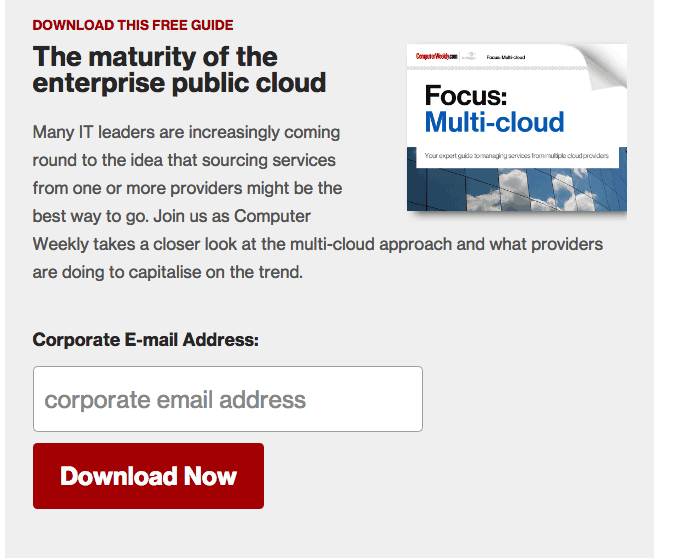 We propose that most people who fill in this form have no idea what is behind this innocent-looking website. This email form, along with cookies, is what feeds the TechTarget marketing system.

ComputerWeekly states that by filling out your email address (which is done to receive some content), this gives ComputerWeekly the right for their technology “partners” to contact you. See the exact quotation below.

By submitting your personal information, you agree that TechTarget and its partners may contact you regarding relevant content, products and special offers.

However, this provided information does not explain the extent of what happens after ComputerWeekly/TechTarget receives the information.

Furthermore, when you select the partner list, you find a list of what appears to be a little less than 1000 partners. And, of course, SAP is one of these partners. ComputerWeekly receives around 1.7 million page views per month.

With so many page views and its backend, it can aggregate its email addresses to build a profile of interests in various technology and track how that interest rises or declines over time. 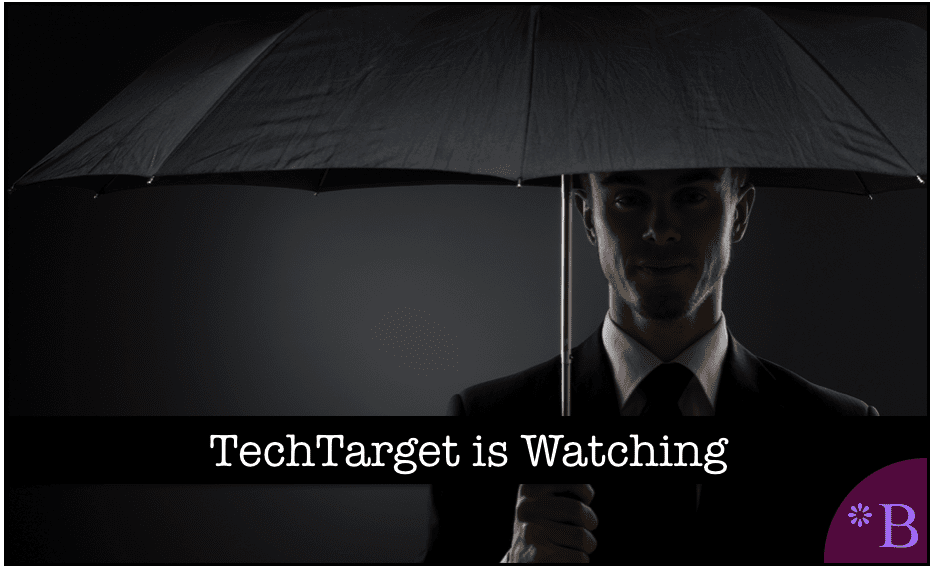 TechTarget is watching, as are 1000 tech companies that are customers of TechTarget. Nothing on the ComputerWeekly website indicates the powerful backend analytics to which your email is subjected.

This means that while the individual may think they are merely giving over their email, they are signaling to TechTarget and giving up their privacy in a way they are, more likely than not, not fully aware of. Secondly, the person filling out the form has no idea that they fill out that one form. It is as if they are filling out 50 or more forms on different vendor websites! TechTarget has hundreds of customers, and your email, as well as your company, could end up being shared with any of those companies.

TechTarget’s website (which, again, the reader does not see) is very clear about how they allow tech companies to monitor readers. 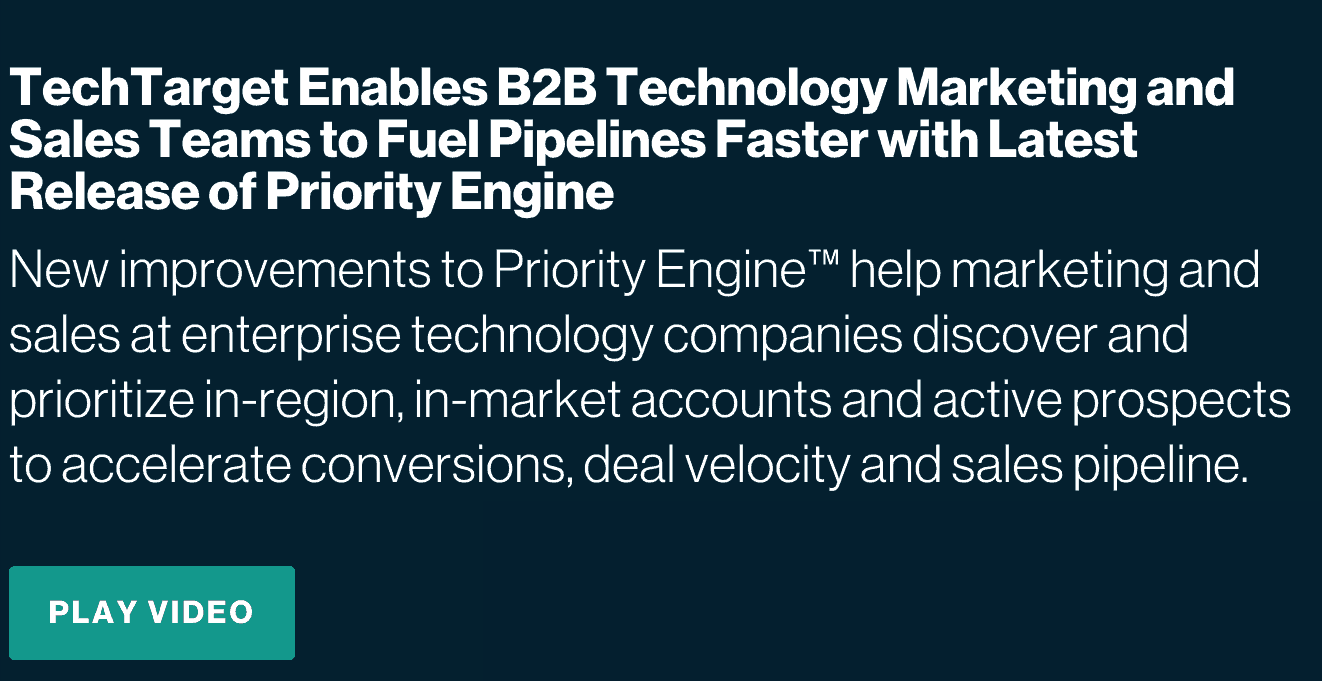 This video, also on the TechTarget website, also shows how the TechTarget platform works. Discover.org is a popular marketing platform that integrates with TechTarget. In this way, TechTarget is integrated with other data, making the information even more powerful, which means even more invasive of your privacy.

ComputerWeekly is a honeypot designed to obtain volume that can then be sold to technology companies. This means that ComputerWeekly aggressively tracks its viewers. It also means that its content is optimized around how to get the most targeted emails so they can be processed.

To maximize such a model’s financial benefits, you would have minimal interest in what is true; One would expect that ComputerWeekly would never write anything critical of any technology company. They will repeat self-serving quotations from readers, as stated in this article.

Furthermore, it is quite likely that the articles’ topics are backward engineered from the information they need to collect. This means that SAP and the other partners instruct TechTarget what leads they would like, which most likely strongly influences what is published. And the larger the entity and the more they can pay, the more TechTarget will direct its resources to write articles about those subjects.

The objective would be to write articles that can maximize its ability to sell its audience to technology companies. ComputerWeekly does not need to advertise because the entire website is an email harvesting system. Advertising implies that the reader will see the ad and then contact or purchase from the advertiser. But in the TechTarget model, ads are redundant as the customer of TechTarget (i.e., the partner) contacts the reader. Remember, SAP (and other tech companies) has an extensive database of email addresses and other contact details. This means they do not necessarily need to contact the person filling in the information. They may determine the person is too far down the food chain to be worth contacting (i.e., not an influencer). Instead, they may use the filled-in email addresses of a particular company to signal intent or interest and then select what they think is the best contact in their database for that company to reach out. This may be determined by the account manager who would be assigned to the prospect.

ComputerWeekly and TechTarget are yet another example of what is wrong with IT media. Here we have a popular website posing as an information provider with its primary objective to capture information that it can sell as part of a marketing solution. And it is deceptive because, unlike an ad, the reader is not aware of the complex apparatus in the background.

Interestingly, ComputerWeekly even had an article that is quite relevant to this topic. However, they come to a conclusion that should be analyzed.

“We can’t and won’t go back to that old world of heavily staffed newspapers offering careers and good wages. The money isn’t there in the system any more. It is, then, this economic reality brought about by the technological change which is going to prevail.

There aren’t going to be as many journalists as there used to be and they’ll not get paid as they did, simply because the entire ecosystem of the business is able to extract less money from you and I, the consumers.

Which is all to the good of course, we consumers being who the economy is and should be in favour of. But, still, the good old days aren’t coming back; they never have done elsewhere either.”

And guess who wrote this article? Not a member of the ComputerWeekly staff, but Tim Worstall, a member of the Adam Smith Institute, a conservative think tank. “Free market” think tanks love the idea of wholly privatized and corporate-controlled media. It allows the media system to be deprived of income from any source but private companies. This way, the media system does the bidding of elite interests, which serves as a purely propagandist function that is sold to the highest bidder.

That is what is meant when one says to bring the “free market” to media. A free market in media results in a corporate-controlled media, and of course, a media system managed in a hidden manner and has no mechanism to police itself or has any other objective than to push the product out the door. Care t0 take a guess who pays the Adam Smith Institute to write such articles?

And this is the perfection of the model of “free market” media entities, as promoted by conservative think tanks. It meets the twin objectives of maximizing profits while minimizing the truthful information that readers receive.