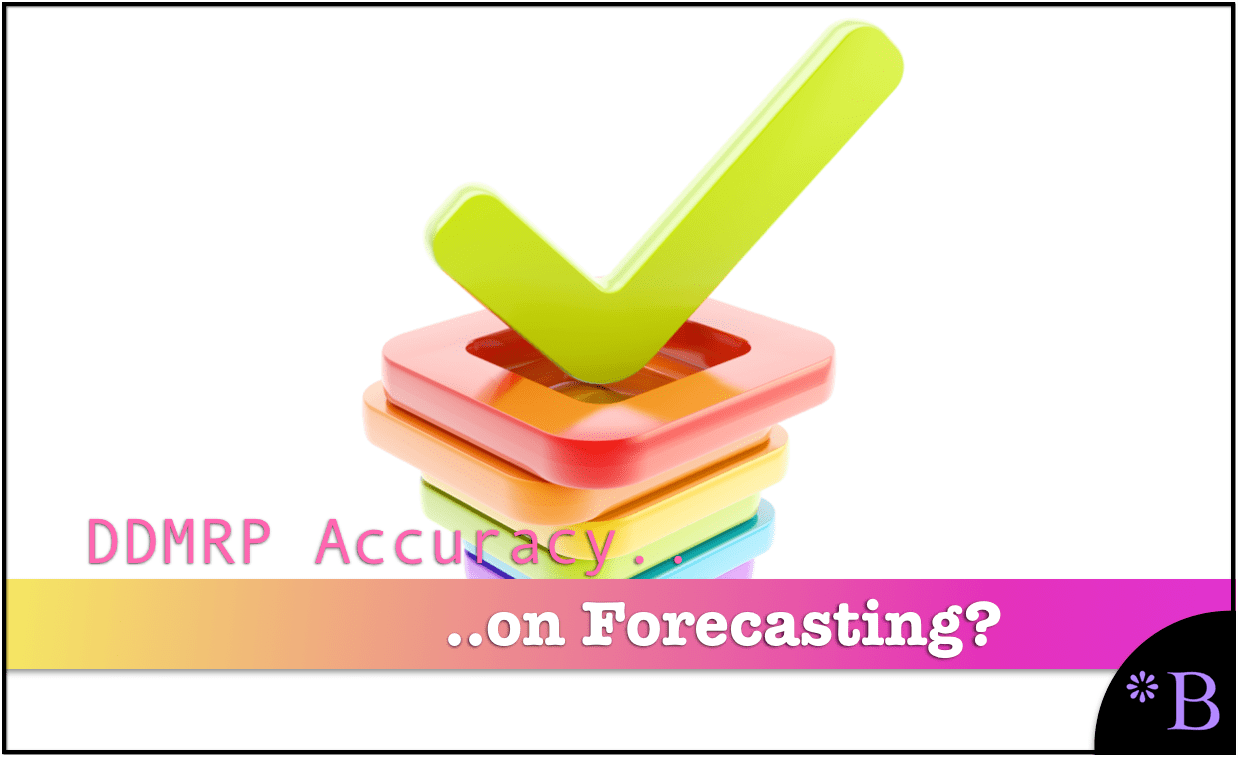 The following article, Forecasts, one of DDMRP’s best friends, was shared on LinkedIn and was written by David Villalobos on July 16, 2020. 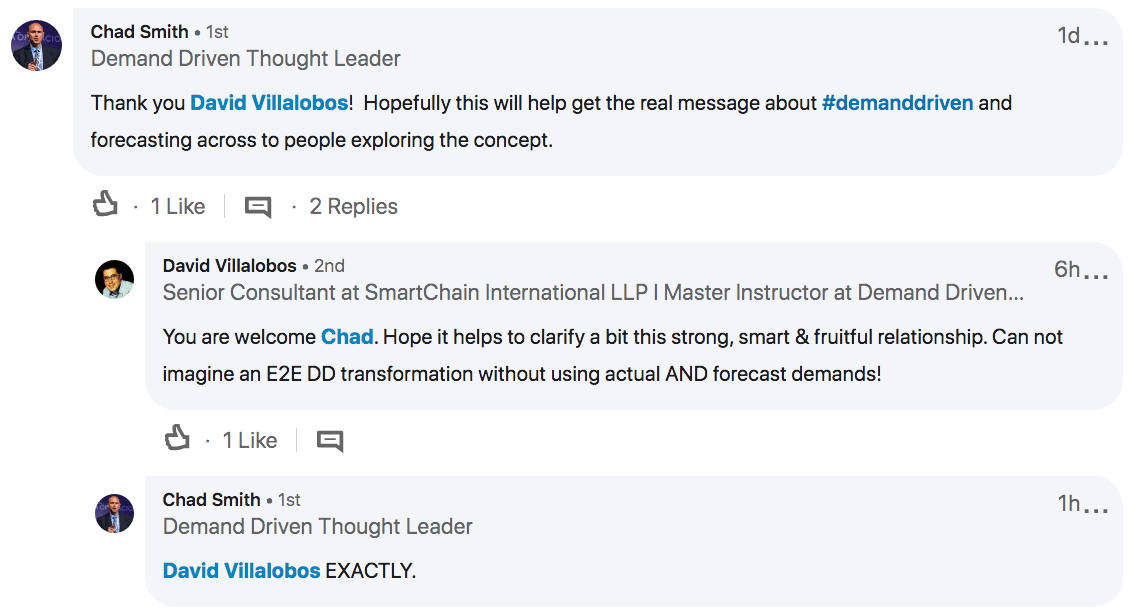 Therefore, it can be considered an approved explanation of how DDMRP views forecasting.

The Best Freind of DDMRP?

Yes, one of its best friends. Perhaps the second best after actual demand. I can say, from theory and first-hand experience on global transformations, it is one of the biggest misunderstandings about DDMRP. You can even hear and read well-known Supply Chain Experts and Thought-Leaders denying or minimizing the role of forecasts in a Demand Driven Supply Chain (DDSC). It is a pity, because they deeply potentiates each other.

DDMRP proponents frequently make it sound as if it is odd that so many people would misunderstand that the forecast is very important to DDMRP. Let us see, where would they get that idea.

Well, one reason is that DDMRP duplicates the Lean critique of forecasting.

Increasing network complexity and enlarged product portfolios result in higher planning effort. Furthermore, shorter product lifecycles and higher customer expectations with respect to delivery periods lead to increasing volatility and uncertainty. In such an environment, demand forecasts are always wrong and often deviate by more than 50% from the actual demand. Consequently, the wrong quantities are sourced, made or shipped to the wrong places resulting in low customer service levels. In order to avoid such problems, companies often spend a lot of money and time moving products and materials through their factories and supply chains, resulting in high inventories. However, companies still often fail to meet the target service levels. – Camelot

That would appear to be a very anti-forecasting statement, and DDMRP proponents routinely make the Lean argument versus forecasting.

At the one minute mark of this video, Carol Ptak states that

“no matter how you torture the past it won’t tell you the future.”

This is again, another anti-forecasting statement. And there is a lot of question as what this means. if a forecast has high accuracy, it may not tell you exactly the future, but it is still very valuable.

It delivers flow by eliminating the expediting and variability that is caused by this use of inaccurate forecasts.

This proposes that forecasts are not input to the system (but again are used to determine buffers stock). This does not eliminate expediting and variability. In fact, in most cases, and depending on the forecastability of the item, it would increase expediting and variability as it cannot see future demand. Or the future demand is only accounted for in the buffer stock.

This is again, another anti-forecasting statement.

Let us see how David does this as well.

Lets see how: 1. Forecast fulfills its true purpose with DDMRP. Forecast’s purpose is to provide an acceptable estimation of the future, rather than an inflexible and accurate course of action to be followed in the present (example: climate weather predictions & journey plan). This is specially true under quite variable environments.

This is a paper Tiger argument.

It proposes or at least insinuates that this is how forecasts are accepted outside of DDMRP. Furthermore, all that DDMRP does with the forecast error or variability is to use it to set buffer stock — which is the same thing that safety stock does in MRP systems.

In a DDSC, the forecast function contributes to focus on building resilience rather than chaos. How? Although buffers may be designed based on forecasts (yellow zone), at the same time, buffers are self-protected and expecting for variation and error (red zone).

Precisely as with safety stock in MRP systems. It is difficult to see what is new here.

Most important, replenishment will be triggered only based on actual demand. Rather than blame the forecast and poor forecasters, accept that forecast will be wrong, and use it to plan for agility!

Triggering replenishment based upon “actual demand” is called consumption-based planning or reorder points. This can be one in MRP systems as well.

In a Demand Driven Supply Chain, the forecast function contributes to focus on building resilience rather than chaos.

This is an assertion without evidence.

There is no extra “chaos” with an MRP system with safety stock versus a DDMRP system. This article is mischaracterizing how MRP systems work to try to make DDMRP seem novel.

2. Forecasts are the best friend of a DDSC when taking long-term decisions. One of the most beautiful aspects of DDMRP buffers is that they could easily be translated from stock information to working capital, space and load projections. Which is the key input to make these long-term projections? Yes. It is forecast.

Actually, at the right level of granularity and in the right time window, your forecasts will be more accurate. CEO’s, CFO’s, VP’s can easily relate their operational constraints & opportunities with their strategic decisions based on the simple and very visual buffer logic. Then, which is the bridge to do that translation? Yes, again, forecasts. (example: warehouse building decision).

DDMRP and Forecasts Best for the Short Term?

3. Forecasts are the best friend of DDMRP in the short term. Forecasts are useful when designing the target operation model of your DDSC. Forecast is the key input to answer these challenging operational questions: how to size your buffers and when and how much adjust them for the future (example: a promotion, seasonality). Planners, Planning Managers, Production and even Sales Teams may easily follow the implications of forecasts on the buffer size and zones, and then on the stock availability and service levels.

DDMRP and Forecasts for S&OP?

4. Forecasts are the best friend of your Demand-Driven S&OP process. Forecasts are always vital when doing a typical S&OP. However, forecasts will be better utilized when doing DDS&OP. Why? Usually, S&OP teams are fully absorbed by forecast accuracy, plan corrections & blaming people. In DDS&OP, we have seen that a key new role emerges: the Buffer Manager. Buffer Manager’s role is purely focused on understanding buffer variation, adjusting buffer parameters -not fixed plans-, providing recommendations and “what if” scenarios. The pillar of these powerful analysis is -again- forecasts. In few words, DDS&OP is focused on ROI rather than prediction power, correction and justification. Forecasting is no more the stone in the shoe. It becomes a cornerstone for agility.

This appears to state that less effort is put into forecasting and more time put into setting safety stocks/buffer stocks. That is one option — but it is not necessarily the right move. It depends on the situation.

DDMRP and Forecasts are Very Different?

5. Demand Planning function is still relevant but its focus and stress dramatically changes. Your Demand Planning in a DDSC should be very different. Move from the blame game and “illusion of control” by setting up your supply chain to manage the variability you actually have rather than what you wish you had.

So, apparently, using forecasts in an MRP context or should we say a non-Lean context leads to the blame game and the illusion of control — while DDMRP — and its use of buffer stocks — results in managing the variability “you actually have.”

Roughly speaking, this means you focus less on forecasting and accept your error with minimal forecasting effort and meet the demand with stock. It is true that there are many situations where this is a good strategy. But the same strategy can be just as well — and probably more easily applied in any MRP system.

This is based on the information that you already have. No magic here. DDSC is resilient and not paralysed by forecast inaccuracy because we don’t execute on the forecast: only real demand. Forecast Accuracy & Bias will be still measured, but they will be a secondary metric and driver. People can not guess the future and should not be blamed for not doing it.

Again, — basing planning on real demand means reorder points. This is not considered desirable for many companies because it does not give them sufficient visibility.

If I went into a company and declared that the needed to set reorder points for all of their item locations and then reduce their effort in forecasting and spend most of the time on setting safety/buffer stocks — I would probably get thrown out of the building. However, somehow when executives see that this is now DDMRP, apparently many of them think that it is ok?

I can continue with many more aspects. In few words, forecast is not an enemy or just a simple friend of DDMRP. It is one of the best ones. Sometimes, the only one. Hope these five aspects contributes to change the misunderstanding about an animosity, where actually there is a strong and win-win friendship.

There is a lot of animosity towards DDMRP and its proponents because they frequently provide inconsistent explanations as to how DDMRP works. And DDMRP proponents have an established pattern of telling everyone that their approaches to planning are useless because of the increased volatility in supply chains, and there is only one “true religion,” which is DDMRP. This is not really a “win-win friendship.” DDMRP is seeking to replace traditional planning systems, but declaring that DDMRP and only offering rigged studies that I have evaluated in the article How Convincing is the MIT DDMRP Study?

Given the tactics of DDI and Chad Smith to impose DDMRP on people and to mischaracterize forecasting and MRP, the animosity against DDMRP is well deserved.

This article scores low for accuracy in terms of how it describes forecasting and MRP. It is correct in its assertion that sometimes the best strategy is to deal with a lack of forecast accuracy with inventory — however, it is disingenuous in proposing that this cannot be done with existing tools.

Furthermore, the article and DDMRP in general plays word games with the term “buffer stock.” Buffer stock is the stock designed to deal with unforecasted variability (on the supply and demand side), which is the exact definition of safety stock. It is perfectly fine to come up with a new stock name as it may have some other bells and whistles. Still, it is not honest to continually say it has nothing to do with safety stock or that people that call it “basically safety stock” do not understand DDMRP.

DDMRP proponents also play “hide and seek” with what they think of forecasting.

In many occasions they undermine forecasting and try to minimize forecasting, then when challenged on that, they often switch to

..which is basically the tact taken by this article.

“You know nothing about DDMRP.”

“It is really sad that you don’t seem to understand DDMRP.” 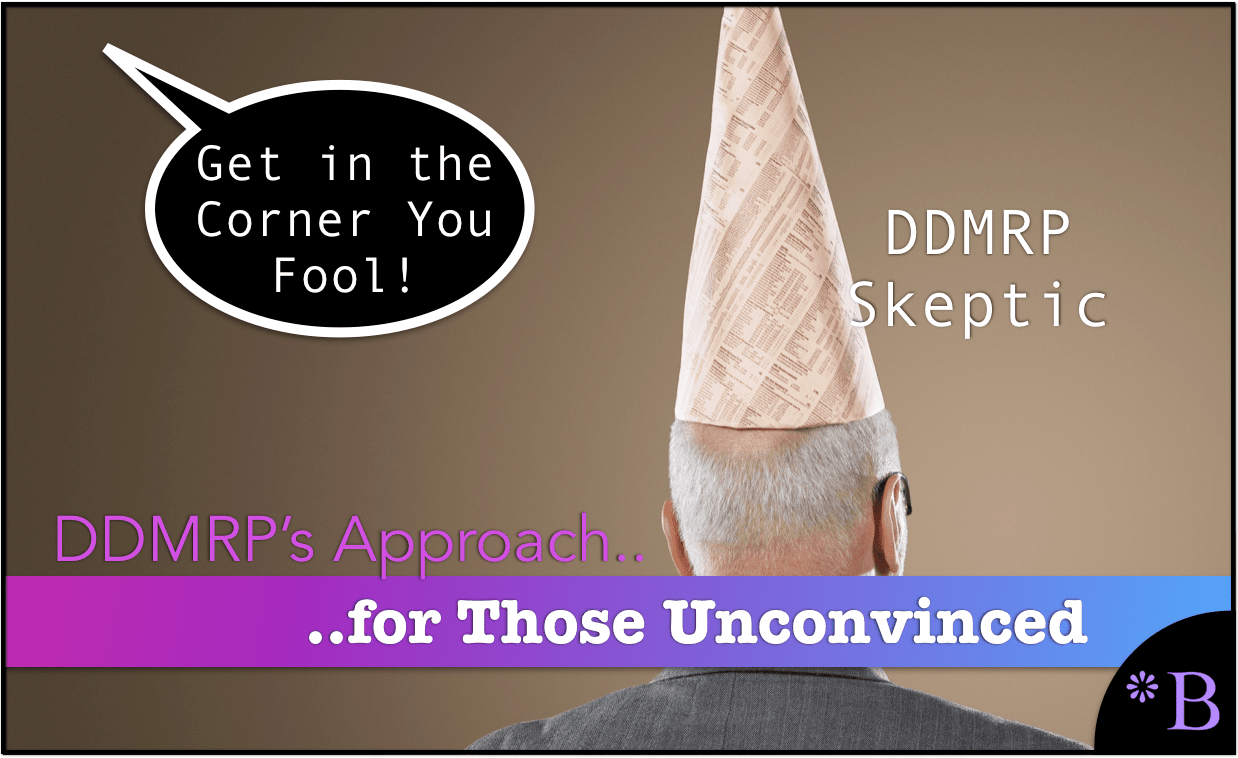 DDMRP proponents impose an unending word game onto those that critique DDMRP until it is agreed to that no one but DDMRP proponents can understand DDMRP, and those that critic DDMRP is either stupid or have not invested the time to understand DDMRP. DDMRP must be acknowledged as the best supply planning system ever invented and all MRP systems destroyed and a failure to do this — is simply an acknowledgment of a “misunderstanding” or “ignorance” of DDMRP.