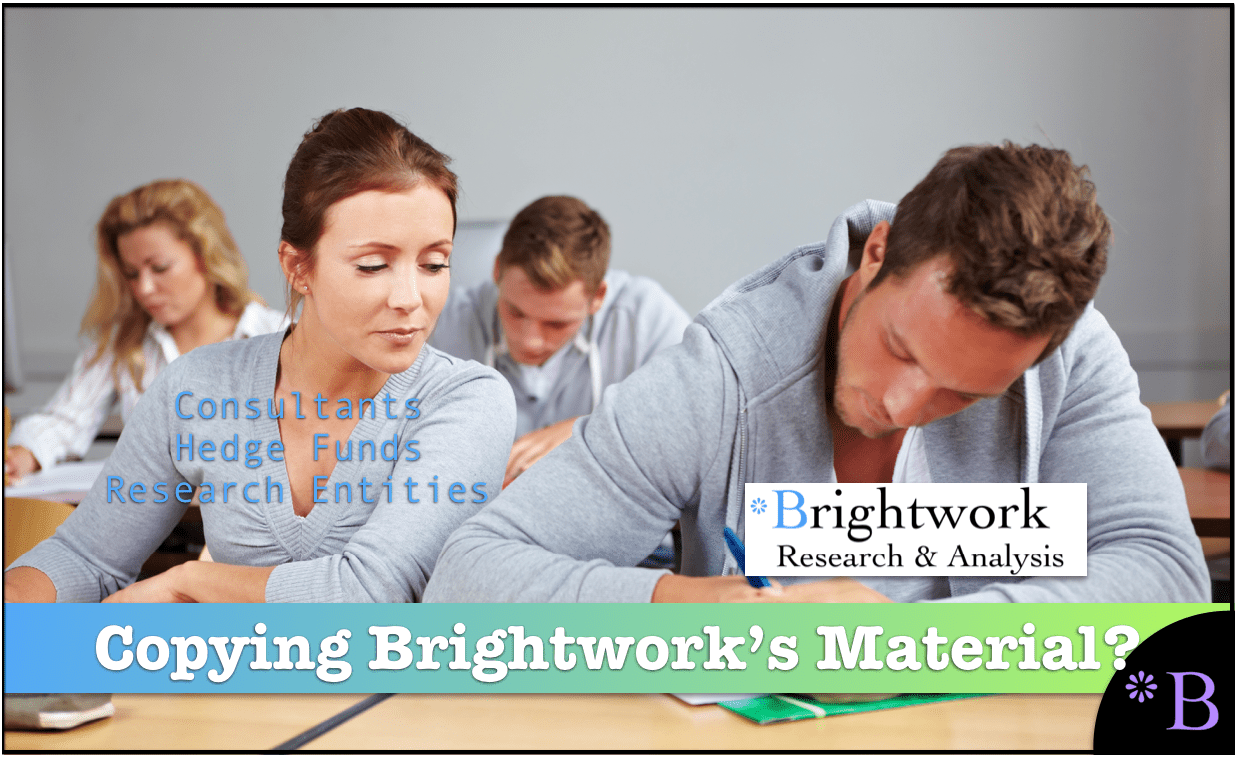 I noticed that companies that present information to their clients have been approaching my research entity, Brightwork Research & Analysis, do not use references. I also found that we receive requests to answer questions for four or five thousand dollars.

Small research projects are also often an attempt to skim off of our pre-existing research by extracting just the research conclusions. Most companies will not fund research. They want someone else to do the hard work, and then they come by and skim the conclusions. This is why there is only a very small amount of actual research produced in the IT space. Companies will spend hundreds of millions of dollars on IT implementations, often without good information for what they should implement. Still, they have only a very tiny budget for research, most of which is allocated to three firms — Gartner, Forrester or IDG. None of which produce independent research.

The vast majority of what is called research is externally produced marketing collateral. That is, vendors or consulting firms can take the material and use it to convince prospects to buy their applications or consulting services.

We don’t do research for IT analyst firms or consulting firms, hedge funds, or Private Equity.

The reason is that the temptation is too strong for them to resist, taking the research, and then remove our logo and present the study as their own. Having seen this several times, we stopped working with any of these firms. A consulting firm can bill a customer 6x what we are paid and relay our research to not just one customer but multiple customers.

When consulting firms or analyst firms contact us, we have learned they are typically interested in stealing our IP.

In the research field, the vast majority of those research entities do not show references. For instance, this is why you don’t see references at the end of a Gartner report (or Forrester reports, or IDC reports, etc..)

The idea promoted by Gartner and virtually all IT analysts, hedge funds/Private Equity, and consulting firms (notice the lack of reference in consulting presentations) are that all knowledge is created internally to that firm. That is, the consulting, analyst, and financial analyst space is about presenting the work of others as your own.

Pretending You Invented Everything

While working as a subcontractor for a consulting firm, I was told to remove references to the author of a forecasting book I used in the presentation. I was told that the client was

“Paying to hear what the consulting company thought, not what the forecast book author thought.”

This was stated even though the only person who knew anything about forecasting that worked on that project was me. The consulting firm had sold their expertise in forecasting without having any employees who knew the forecasting subject. It is considered entirely normal in the consulting market to sell your skills or knowledge as a company — and then go and hire a contractor to perform the work. A director at this consulting firm would interview me as for what we would do, and then go around the corner and explain what I had explained to him, to the client. This may be acceptable if I were working in a non-English speaking country, and translation was required, but the client and I spoke English.

Therefore, the distaste that the director had for using references, also extended to my IP as well.

This is an email from a hedge fund researcher.

Hi Shaun I wonder if you can help me I’m not sure if this is the type of consulting you undertake (I did read the rules!). I’m a researcher for (name redacted) investment management company, we’re a long term investor in SAP and I’m doing some work to try and understand the company better. I wondered if you could spare me an hour for a general background chat, I’m happy to pay your usual consulting fee. Let me know what you think.

This is a very typical email. It is chipper, designed to create a relationship, and the expectation is that even hedge funds can access research for free. This person has an incentive to make a good impression on her employer, which will mean minimizing the use of references. This person has not SAP background, no systems background — and is probably not who should be doing the research. They will, of course, not admit this to their employer — and thus need to go and see what they can find on Google. And if the researcher can walk them through the research for say $250 even better.

The Normalization of IP Theft

This shows the degree to which consulting firms are so comfortable presenting other’s ideas and IPs as their own. It is accepted in the consulting field, that you present the ideas and IP of others as you own. If you place a consultant in a subcontract position, you can then try to extract his or her IP that it may have taken ten years or more to create. IBM does this by hiring people with well-known followings in a particular area, and then dispensing with them and hiring new prominent people. The objective is to act as a vampire on the work of the individual and pretend it had something to do with IBM.

Consulting firms exist in a make-believe world where all IP is created within the firm, where references are actively discouraged. For example, the university system’s research (which they laud in their consultants’ educations) basically does not exist. That is, one is supposed to show that they went to prestigious universities — but not admit that their information comes from anywhere but IBM, Accenture, etc.. And the small consulting firms I have subcontracted to behave in the exact same way as the large consulting firms in this area.

Each consulting firm places itself as to where the real source of truth lies — which is curious because IT consulting firms are run by salespeople who not only don’t understand research, or the scientific method or how to create IP. Consultants and consulting firms, determine what is marketable or what is profitable, and then reverse engineer the conclusion from the objective. This is the exact opposite of research — and is why I called out a PwC “Research Fellow” for having a fake title as I cover in the article Why PwC’s Research Fellows are Fake and Pretend to be Academic. As a hot tip, if you report up through marketing — then you are not a researcher — you are a marketer. This data point was compounded by when I was checking the backgrounds of people who held the title of “Research Director” but who had never done any research before taking the position — and their previous roles had been VP of procurement. Once again, nothing is gained from having ex VPs of procurement given fake titles related to research.

In academics and in research, the situations of sources are critical. However, in the private sector, source listing is counterproductive to IP theft and to pretending you did work you did not do.

Here are a few examples of things I have run into in the past few years.

The fact that there are so few references to sources in the vast majority of analyst reports consulting reports, etc., should tell us that any people plagiarized material and pretending they invented or came up with ideas they did not.

The Inevitability of Relying on Sources

How to React to a Report Without References

This lack of references should cause one to pause.

If a firm produces a long report but has very few references, it means that either the report author or the company they work for are dishonest and will lie about the work they have done. (Recall, my subcontract role required me to remove the reference to the author. Therefore the offending entity was the consulting firm. I was able to make my point without using a reference, but I would have preferred to have kept the reference).

Dishonest reports, aside from being wrong, are unreliable sources of information. This is because a dishonest author or analyst will rig the report to whatever is in their financial interests. And the majority of private-sector research is rigged — like the Gartner Magic Quadrant.

What is generally little discussed is that private companies have a history of producing very rigged research.

Academic research developed its reputation for reliability because authors were protected from their research conclusions’ financial implications. However, this has fallen apart in medical research and increased political correctness. The reduction of the percentage of university budgets paid for by tax dollars indicates that academic research is very likely to further decline in independence in the coming years.

This occurred with KPMG, which was supposed to deliver a report on corruption to the South African government, and they falsely implicated individuals who were fighting corruption, but who were following up with corruption perpetrated by KPMG as we cover in the article The Falsified KPMG Report on Corruption in South Africa.

KPMG, for example, has such a history of producing fake reports, of signing off on deceptive accounting books, that it is curious why anyone would either pay KPMG or bother reading KPMG’s reports — except as a form of research for how to identify false information. (This was precisely how KPMG functioned internally when I worked for them several decades ago.)

A Lack of References as Part of IP Theft

It is completely foreign to me not to use and show references, but to companies that don’t produce IP, but like to pretend they do, they view every reference as a possibility that the audience will think they know less than they do.

This also gets into the topic of ghostwriting. Their employees do not write some of the content on these company’s websites. Ghostwriting is extremely common in the are of celebrity books. This is where a person has an established brand and interest, but is not a writer and could never write a book. When a person becomes well known, they have a built-in audience for a book. Ghostwriters interact with the celebrity, but normally the celebrity will give the ghostwriter notes. Some of the best selling books are not written by the celebrity, but instead by a ghostwriter.

In the past, I have taken ghostwriting contracts for a few vendors. This is where an author is hired to write material that is then presented as if it was created internally by the company. While this is an accepted practice, I have stopped doing it. I have concluded that this also a dishonest presentation. There is also something very odd about reading one’s material on another site, where that entity pretend they wrote it.

No one has ever paid Brightwork to publish any material on the site, but some of our material is published on the sites of vendors that those companies could not have written themselves, and that looks like they did write it. That means they are pretending to have knowledge that they do not have.

If you can’t trust the entity to include where they got ideas, then that source itself is a problem. You are being lied to –which means the research conclusions are also most likely not reliable.

In the case where I was pressured to remove a source reference, the consulting firm I worked for was untrustworthy, and they should not have been listed on other topics.

Of all the companies I worked for as a permanent employee, there was not a single one that could be trusted to deliver a non-rigged report.