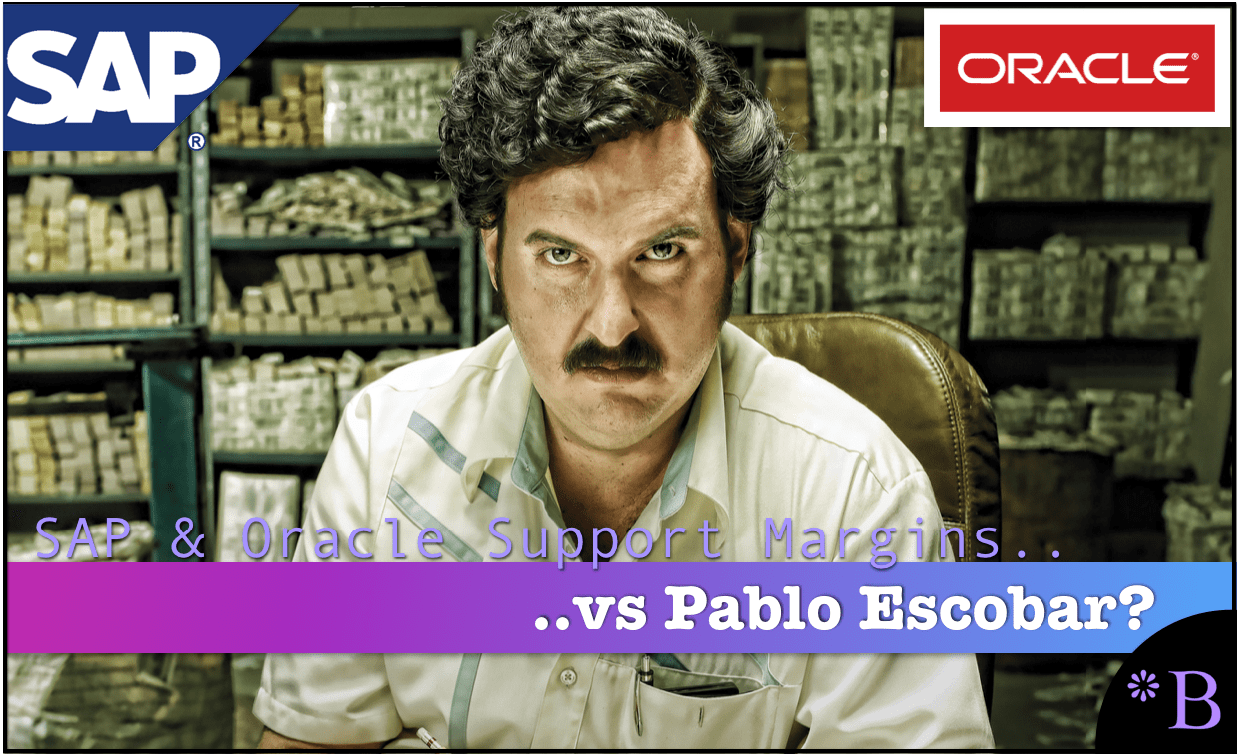 About the Medellin Cartel

While watching documentaries on Pablo Escobar, the scale of his operations boggles the mind. Pablo Escobar and his associates were a corporate conglomerate. Pablo was making close to 1/2 a billion per day. The Medellin drug cartel operations were an extensive network of drug factories and air transportation bringing cocaine from Columbia to the US (primarily). They were the world leader in the manufacture and distribution of cocaine and the category leader. If the Medellin drug cartel had been a listed company, it would have been an attractive stock, and they were a great growth story. They had high profitability and very low debt. What was not to like?

Pablo Escobar and the Medellin Cartel’s Profit Margins on Cocaine

Pablo Escobar also had a profit margin on his cocaine that was very reminiscent of two other companies, as the following quotation can attest.

“The profits were astronomical at every step. In 1978 each kilo probably cost Escobar $2,000 but sold to Lehder and Jung for $22,000, clearing Escobar $20,000 per kilo. In the next stage they transported an average of 400 kilos to south Florida (incurring some additional expenses in hush money for local airport authorities) where mid-level dealers paid a wholesale price of $60,000 per kilo; thus in 1978 each 400-kilo load earned Escobar $8 million and Lehder, Ochoa, and Jung $5 million each in profits. Of course, the mid-level dealers did just fine: after cutting the drug with baking soda each shipment retailed on the street for $210 million, almost ten times what they paid for it.” – Mental Floss

Would Pablo Escobar Have Admired Hasso Plattner and Larry Ellison?

Now comes the multiple-choice part of the article.

Notice that both SAP and Oracle had plenty of money coming in to keep up the support quality, but they preferred the margin from locked-in customers. They also have been steadily increasing the support percentage, and just a few years ago bumped it from 15% to 22%+ (for SAP, 22% just the starting point. Many of their products or product areas are not covered by the standard support fee). SAP and Oracle support used to be comprehensive, but the basic support is increasingly treated more like a “bottom tier” by these vendors. Both SAP and Oracle see the 22% as the “built-in” cost that all customers need to pay. Then actual support starts above that level.

The Secret to SAP and Oracle’s Revenues

Both SAP and Oracle receive over 50% of their revenues from support. This percentage, combined with the profit margin on their support, is the secret to these companies’ revenues. And they float both of these companies. We quote the following.

“These revenues account for more than all of Oracle’s operating profits. (Maintenance revenues do not have sales and marketing costs, they are for the most part, automatically renewed, they do not have R&D costs and they have minimal G&A costs). Without the golden stream of maintenance revenues, there’s no stable, highly profitable and usually predictable Oracle. (emphasis added)” – Seeking Alpha

For those that would defend SAP or Oracle’s margins, there is a problem. Economists state that excessive profits are evidence of monopoly power. How did Pablo Escobar control 80% of the cocaine distributed and consumed in the US market? He murdered competitors. At one time, Pablo Escobar had 500 sicarios or hitmen working for him. SAP and Oracle use a different approach. They combine a partner ecosystem with constant acquisitions. They also leverage monopolistic control of a core component of enterprise software (the ERP system for SAP, the database for Oracle).

Economists are clear on this, and there is no way SAP or Oracle could maintain such margins unless they possessed and exercised monopoly power against their customers. Criminal organizations like the Medellin drug cartel and large organizations like SAP and Oracle lead to monopoly profits.

Interestingly, there seems to be little questioning of whether such margins are fair to customers and what margin level indicates a problem with greed. The question that should be discussed is, what type of entity charges their customers a plus 90% margin for an item? Well, we know that this is roughly the same margin as drug cartels. The second question is, do we hold the profit margins of drug cartels to be ethical? How about blood diamonds? How close does the profit margin have to be to 100% before some mental alarm is sounded? Because hundreds of thousands of SAP and Oracle employees and followers support, profitability seems pretty reasonable.

Pablo Escobar was generally considered a bad person and not someone you would have over for dinner. However, it turns out that the margins on his cocaine were less than SAP and Oracle’s margins on support. Yet people like Bill McDermott and Mark Hurd are celebrated in the press.

Some people reach out to me and express surprise at the margins described in the article on SAP and Oracle support. This was less common knowledge than I had anticipated. The article’s point was to compare the margin to an illegal operation as a means of understanding how SAP and Oracle can do it and get away with it.

We have heard quite a bit from SAP consultants or resources who did not like this article at all. The primary issue with SAP consultants have chosen to focus on is whether the comparison should have been drawn. As I was reading up on Pablo Escobar, I found out the margin on his cocaine. I thought,

“Wait that is the same margin as Oracle and SAP on support.”

The margin was so high and so rare, the thought was immediate. The proposal by SAP consultants is that I should not have thought that. However, that is automatically what my brain did. I should not have thought this, even though the margins were rare and close to the same. The argument has been that it was inappropriate to write this article, but if it was inappropriate to write it, was it inappropriate to think it? That is, should the very associative thought be censored? So far, it seems like the answer is yes. That the pro-SAP resources have proposed that some thoughts are allowable, but other thoughts are not allowable.

The SAP consultants may not have a problem with the margin changed on support because they don’t pay it. However, if they paid for it, would they complain? I think they would. Most consultants I know like to get a good value for things that they buy and do not appreciate being taken advantage of. I have had SAP consultants complain to me about high housing closing costs, which are far less difficult than SAP support.