The story of the opioid crisis is in part a story of the complete corruption at the FDA to allow first opioids to be approved, but secondly, the FDA ignoring the overprescription and overuse of these drugs. The only conclusion that one can come to is that the agency is completely captured by the pharmaceutical industry,

A Description of Opioids

The following is a good description of opioids.

These medications are generally used to treat moderate to severe pain, although some can be prescribed for coughing and diarrhea. These drugs are highly addictive and present a high risk of misuse. Semi-Synthetic Opioid misuse can cause slowed breathing, which often results in hypoxia, a condition that results when too little oxygen reaches the brain. Hypoxia can induce coma, permanent brain damage, and even death. – Addiction Center

It is jaw-dropping that the opioid manufacturers extended opioid approval for coughing and diarrhea. This is referred to as “Evergreening,” where the pharmaceutical company makes successive applications to extend the drug for different conditions.

The FDA Proves to be a Pawn of Purdue Pharma

Since Purdue made it more difficult to grind OxyContin pills, prescriptions have reportedly plummeted by forty per cent. This suggests that nearly half of the original drug’s consumers may have been crushing it to get high. – The New Yorker

Furthermore, after all of this was known, the FDA still gave Purdue approval to do the following.

In August, 2015, over objections from critics, the company received F.D.A. approval to market OxyContin to children as young as eleven. – The New Yorker

How is that even possible?

Much of what you hear or read about dietary supplements is based on anecdotal evidence.

This is the assertion of all drug companies and the major health authorities that are aligned with drug companies that clinical trials are what prove drugs work. However, what they leave out is that the approving entity, the FDA in this case has no standards and is merely a pharmaceutical-controlled puppet agency.

The Reality of What “FDA Approved” Means

Peer-reviewed journals have been shown to have massive problems as is covered in the article The Often Hidden Problems With Peer Review Research, however, the FDA may even be worse than peer-reviewed journals as those on advisory boards that review clinical trials have both financial conflicts and see the industry as providing future employment opportunities. With the billions that can come from drug approval, it is a small matter to pay off and promise future jobs to some FDA officials to get bad drugs approved.

If the agency approving the study is a puppet of the industry and has financial conflicts with that industry, and the top officials later leave the FDA to join the industry, where they then make “real money,” then clinical trials, which are completely controlled by the pharmaceutical companies and which the FDA only sees the end product, do not prove much of anything.

Humans only have 5,000 years of history with opium, yet the FDA decided that prescription did not pose a significant addiction risk to the country.

In 2020, nearly 70,000 people died of opioid overdose. However, according to the logic presented by the American Cancer Society, opioid medications are based upon solid research — as they are a prescription drug that was approved repeatedly by the FDA. The American Cancer Society is not concerned about the risks of opioids, which are just one category of pharmaceuticals, and they are worried about nutrition supplements, however.

And this is due to the profit motive and the fact that the pharmaceutical industry has thoroughly captured the FDA. This video points out that the drug companies and the drug distributors knew exactly what they were doing, and they were creating addicts and killing people. The drug distribution companies like Cardinal Health and McKesson used political lobbying to stop the DEA from cracking down on them.

This means the opioid epidemic is both a failure of the FDA and the DEA or the political independence of the DEA.

And yet, the opioid manufacturers would propose that opioids were proven safe and effective by the watertight drug run clinical trials and the FDA approval process. 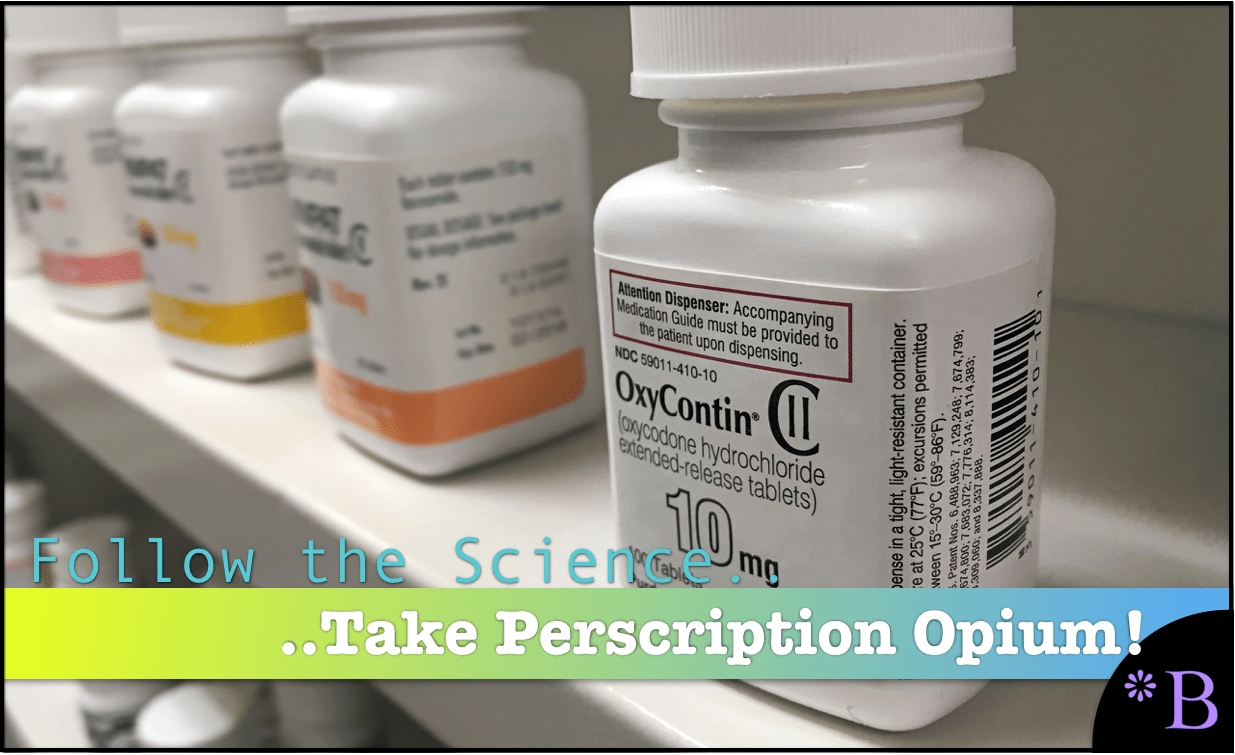 The quote from the American Cancer Society continues…

Anecdotal evidence is based on a person’s (even a doctor’s) personal experience or opinion, rather than research. Be skeptical of sources that make big claims based on a few people’s testimonials or vague references to “scientific proof.” The rule “if it sounds too good to be true, it probably is” usually applies to such claims. And keep in mind that the makers and sellers of supplements have a financial interest in promoting their products.

Yet here is a quote from the congressional record on the topic of what went wrong with the FDA’s approval of Vioxx.

Senator Grassley charged that the FDA “has lost its way when it comes to making sure drugs are safe” and that its relationship with drug companies was “too cosy.”

Dr Graham agreed, saying sweeping changes were needed again because the FDA “as currently configured is incapable of protecting America against another Vioxx.” In response to questioning, Dr Graham indicated that five other drugs currently on the market may be endangering patients, including another cyclo-oxygenase-2 inhibitor, valdecoxib (Bextra; made by Pfizer), the weight loss drug sibutramine (sold as Reductil in Britain and Meridia in the United States), the lipid lowering drug rosuvastatin (Crestor; made by AstraZeneca), the acne drug isotretinoin (Roaccutane; Roche), and the asthma drug salmeterol (Serevent; A&H). – NCBI

Yes, the FDA is “incapable of protecting us against another Vioxx.”

Let that sink in. The FDA did not like this as the following quote reveals.

Dr Sandra Kweder, deputy director of the Office of New Drugs, dismissed Dr Graham’s charges that the FDA failed to protect the public, saying that Merck’s decision to voluntarily withdraw rofecoxib was the result of the “FDA’s vigilance in requiring long term outcome trials to address our concerns.”

Other FDA officials were outraged by Dr Graham’s testimony. Dr Steven Galson, director of the agency’s Center for Drug Evaluation and Research, was quoted in the New York Times (www.nytimes.com) on 20 November as saying that Dr Graham’s assertions were “irresponsible.” – NCBI

So the FDA is caught red-handed approving Vioxx, which led to an estimated 500,000 deaths, and many more heart attacks and the FDA accused Dr. Graham of making “irresponsible” statements about the FDA? It seems like the shoe fits.

The FDA then effectively censored a paper that embarrassed the FDA as the following quote explains.

The FDA issued a statement after the hearings claiming that Dr Graham had failed to adhere to agency protocol when he submitted data to the Lancet from a study he led in cooperation with the healthcare organisation Kaiser Permanente of northern California. The study, which looked at cardiovascular risks in patients taking rofecoxib, was to have been published last week in the Lancet but was pulled at the last minute after Dr Graham had a warning from his supervisor about the publication. – NCBI

So after being caught, the FDA continued to try to cover up the deadly side effects of Vioxx.

After being caught not performing research that would have clearly showed the cardiovascular side effects of Vioxx, Vioxx’s manufacturer, Merck, made a comment that is comedy gold.

Merck’s president, Raymond Gilmartin, defended his company’s actions, saying that it believed that the benefits of fewer gastrointestinal events outweighed the cardiovascular risks. His confidence in rofecoxib was so great, Mr Gilmartin said, that his wife “was a user of Vioxx until the day we withdrew it from the marketplace.” – NCBI

The Reality of Pharmaceutical Trials

The American Cancer Society, the FDA, nor the NIH want to address the fact that opioids, SSRIs (Selective serotonin reuptake inhibitors), antipsychotics, Ritalin, Fen-Phen, Vioxx, and many other drugs flew through the FDA approval process. They want the drug approval process and the process by which pharmaceutical companies create fraudulent clinical trials to be considered completely scientific and ethical. It is almost amusing how silent the health authorities are on dangerous drugs that should never have been approved. I cover in the article How the Head of the NIH Refuses to Call Out Pharma for the Opioid Crisis.

Tends of Billions Paid as Judgements Against Other Opioid-Related Firms

Johnson & Johnson agreed to a $26 billion joint settlement Friday to thousands of claims by state and local governments over the alleged roles it and three other companies played in the opioid pandemic.

Distributors McKesson Corp, AmerisourceBergen Corp, and Cardinal Health Inc. also settled, agreeing to pay up to $21 billion over 18 years, while Johnson & Johnson said it would pay $5 billion over nine years. Another $2 billion has been set aside for legal fees.

But all four companies continue to face litigation in Alabama, Oklahoma, Washington, and West Virginia. Johnson & Johnson also faces litigation from New Hampshire. The lawsuits claim drugmaker Johnson & Johnson and the distributors downplayed the risks of addiction in marketing certain pain medication, including opioids. Nearly 841,000 people have died since 1999 from a drug overdose, according to the Centers for Disease Control and Prevention. The most common lethal overdose in recent years stems from fentanyl, an opioid. – Washington Examiner

Private Companies Pay a Price, But The FDA is Not Held Accountable

After all of this, OxyContin is still approved by the FDA and the FDA stands by its decisions as necessary and appropriate. One wonders why the DOJ has not sued the FDA or at least held the FDA accountable. How did the opioids get approved in the first place?

The government is quite hypocritical in holding private companies accountable (which is the right thing) but not holding the FDA accountable in any way.

This is the FDA’s approval history and history of actions on OxyContin.

FDA approves OxyContin as “safe and effective” for patients with moderate to severe chronic pain following six clinical trials by Purdue. (OxyContin was never indicated for short-term pain such as from broken bones or immediately after surgery.)

At one point in this video, a mother who lost her daughter to opioids states that an FDA official yelled at her that they did not have “the manpower to regulate Purdue Pharma.” The FDA has 15,000 employees, not but not enough employees to regulate one of the most destructive drugs prescribed in the US. All that the FDA would need to do is remove Purdue Pharma’s approval to sell OxyContin. They have absolute power over Purdue Pharma but choose to not use that power due to corruption at the FDA.

There is no way to explain the FDA’s behavior with respect to opioids without linking it to corruption. The fact that the DOJ did not call out the FDA shows that the government is interested in calling out private companies, but when it comes to their own complicity in the opioid epidemic, the government protects itself.