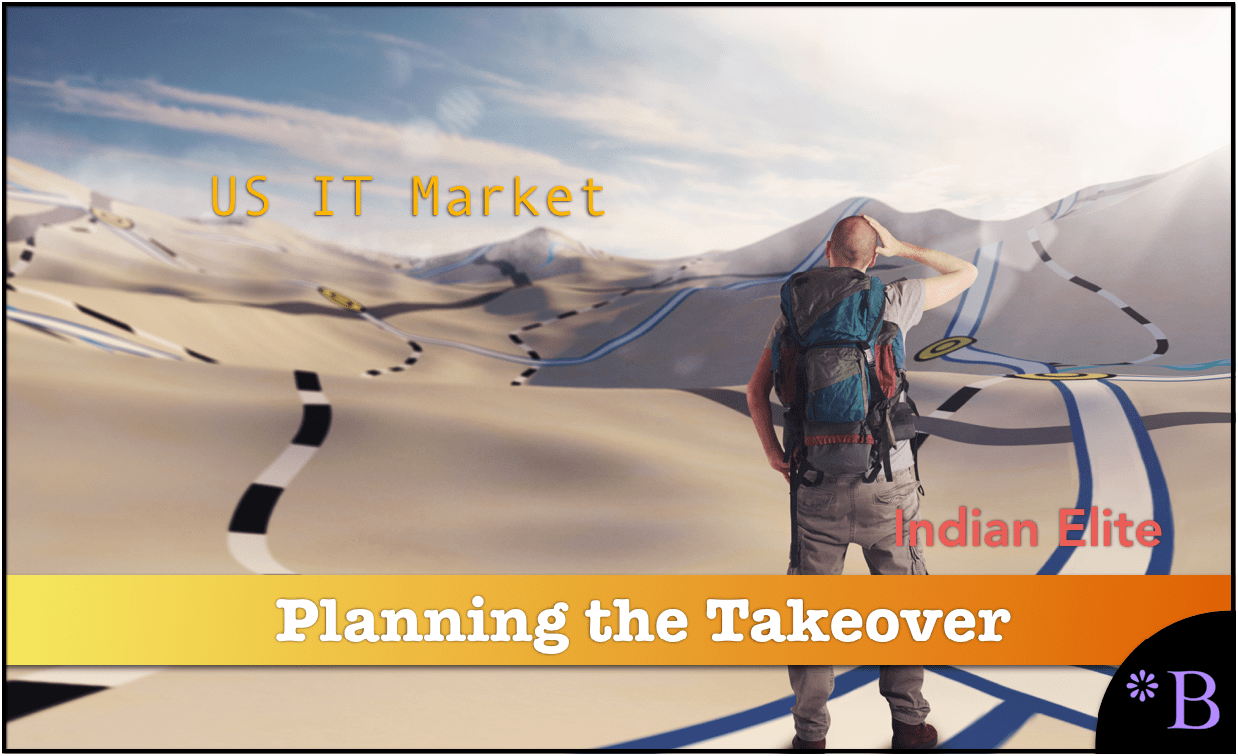 The H1-B and L1 visas are explained to the public as a foreign worker visa program that was instigated entirely by the US. What is excluded from this presentation is how much the program is controlled by both elite Indians, as we cover in the article What is the Indian Hydrabad IT Mafia and What is its Impact on the US IT Market? and the multinationals as we cover in the article Why Are 47 Entities Lobbying in Favor of the H.R.1044 IT Immigration Bill?

In this article, we cover a found quote related to how Indians planned and took control of the US IT market.

How Indians Took Over an US Industry

Indians and Indian govt formulated the plan under y2k bug “the sky is falling” in the early years the guys who came in were skilled and cheap. Under the y2k guise Indians established the beach head like air borne troops in ww2 did in Normandy. After securing the beach head of y2k they built supply chain using F1 student visa’s underground rail road lobbying for more relaxed regime for importing more Indians. – Indians Are Gatekeepers to IT Jobs & Deny US IT Opportunities

We cover in the article How the Y2K Issue Was Deliberately Exaggerated by ERP Vendors, how not only Indians and elite Indian interests overstated Y2K, but many companies pushed the Y2K story for money.

Using 41st ,42nd , 43rd and 44th POTUS the standards for importing H1b F1 and other visa categories were relaxed and lowered to facilitate the passage for Indians, as long as they had a pulse.

Fraud was the norm.

This remained hidden as Indians policy was never to discuss the process in English ever in front of Americans. For three decades plus this continued, unabated. When an American applied for job in it they were always uneducated and incompetent and that we needed stem to educate ours in the new generation.

By controlling hr recruiting, training the Indians were able to sideline the entire generation of Americans and students from it. – Indians Are Gatekeepers to IT Jobs & Deny US IT Opportunities

Now today, American politicians after taking bribes covert and overt, have bought the Indians cool aid that it jobs are high skilled and are the domain of Indians when in fact even a well educated us high school student with some training and mentoring can do it. American politicians have become the patrons of Indians and make a point to look after the interests of Indians versus Americans who vote for them. Talk about our congressional traitors. The current taxation model is geared towards helping Indians colonize US,(emphasis added) while our kids continue flipping burgers and asking if you would like to have fries with that. – Indians Are Gatekeepers to IT Jobs & Deny US IT Opportunities

This is an exceptionally insightful quotation and is rare inside information that Indians related to the control of the foreign worker programs would not want US domestic workers to read.

What is explained in this quotation is also exactly what we covered in the article Hillary Clinton the Big Supporter of Indian Outsourcing and US Worker Displacement.

Virtually no reality on this topic is discussed by politicians — who continue to parrot the “need for skills” argument. Observe in the article Which Politicians are Co-Sponsoring of the H.R.1044 IT Immigration Bill? the politicians who supported the recent legislation to allocate an even higher percentage of H1-B slots to Indians. This is not only the fault of Indians. It would have been impossible without the corruption of US politicians and the US corporations that care nothing about US domestic workers and would undermine them to the maximum degree by importing enormous numbers of foreign labor under the false constructs of “skills” and “diversity.”

US politicians deny any effect on wages by bringing in what is, in reality, around 300,000 workers a year, (as we cover in the article How the H1-B Program Understates The True Number of Yearly H1-B Visas through the various foreign worker visas. The impact on US domestic workers is not an issue that any establishment IT media entity will touch. And the US domestic worker in IT has zero protections against the continual and rising onslaught of Indian H1-B and L1 and student visa holders. Indian firms like TATA Consulting are allowed to operate large businesses in the US and be nearly entirely Indian — without any concern for being targeted by the EEOC, as we cover in the article The Amazing Fact That 99.7% of Tata Consulting is Indian.

It is important to take stock of what Indians (along with complicit US politicians and US corporations) have been successful in doing to the US IT labor market. What has transpired is Indians have, in a way, a large labor union that is constantly rigging employment in favor of Indian workers (both those in the US and those seeking to enter the US) while the US domestic worker has nothing — and in fact is told that “they don’t need a union” and that all they have to do is compete in the “free market” of US IT employment, which no public source will admit has been rigged to favor Indian workers.