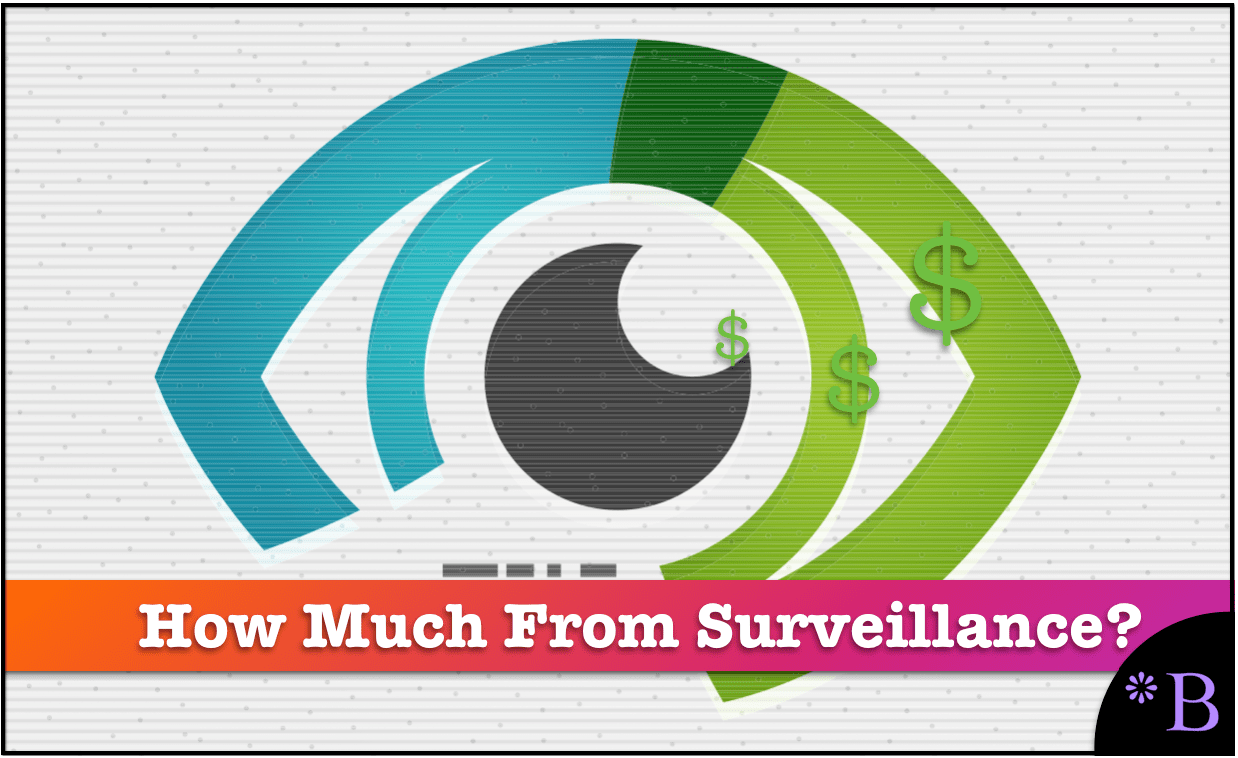 AI proponents and stock followers of FAANG or Facebook Apple Amazon and Google continually promote the way that AI will leverage Big Data for insights and allowing them to monetize their audiences. The fact that one’s privacy is continually being compromised by companies that try to hide or minimize the fact they are doing it. However, it is less clear that these companies are getting that much value from the data.

Amazon’s revenues are roughly $750 per customer (all numbers listed in this section are per year).

However, Amazon is a shopping site, so it is difficult to differentiate between Amazon’s “store” revenues versus store + recommendations, which are enabled with AI. Amazon does not need to surveil its users the way that social media companies do, as when people go to Amazon they intent to buy something from Amazon.

I am an avid Amazon shopper and have been for quite some time. Its recommendations are quite basic, so it is difficult to see how the advanced AI technologies they are employing result in product suggestions.

Here is a search I performed for a subject that interested me. 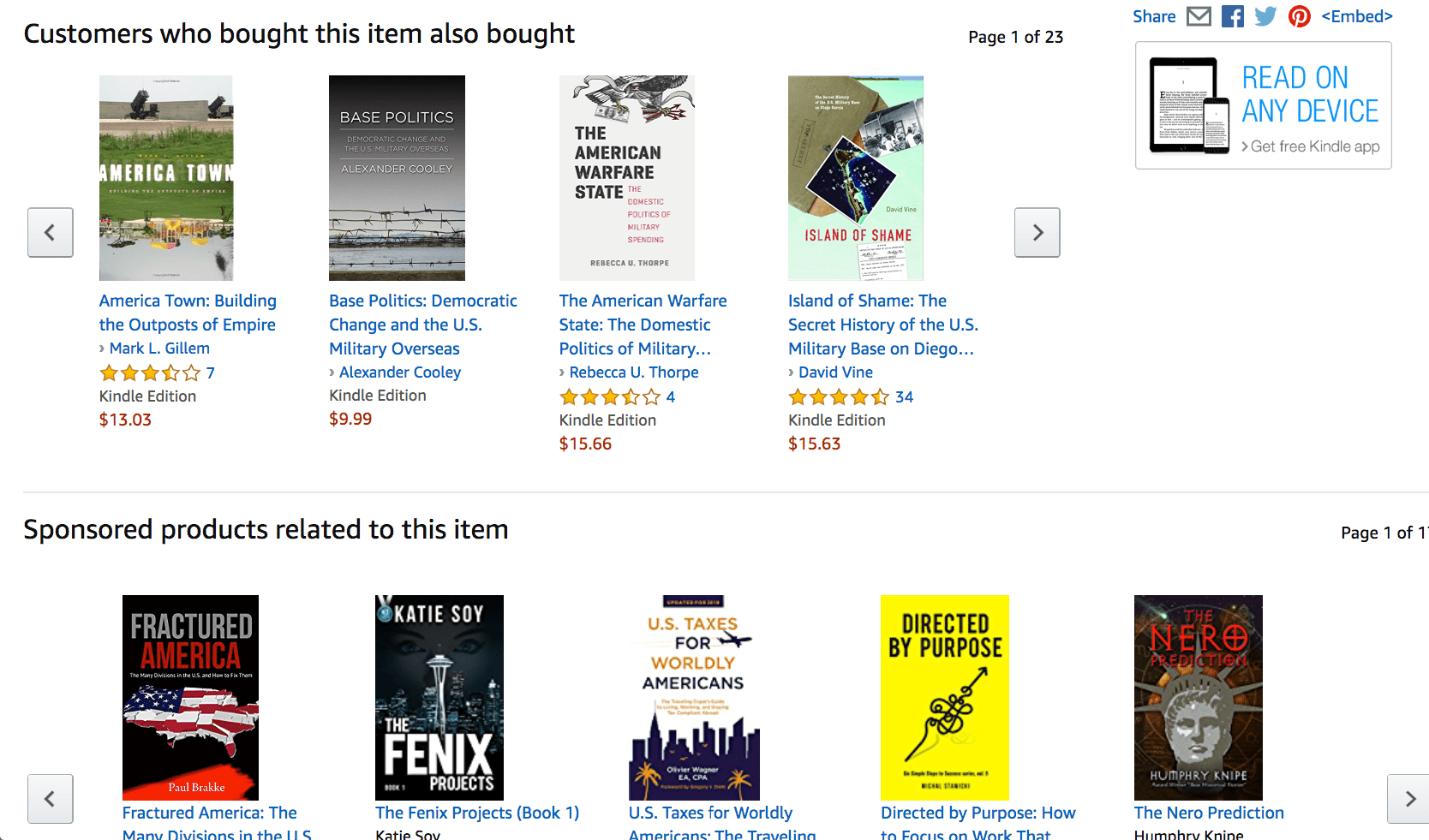 Below the result is the books that other people who read this book also bought. This is the best type of associative result I have ever observed at Amazon. However, notice that Amazon did not need to know anything about me. This is just books that are related to each other.

Now, look at how Amazon makes some extra revenue, which is sponsored results. Whether on Amazon, Google, eBay, etc. These are the bane of websites where you search for something. They always interfere with the search results and decrease the quality of the site search. I rarely select any promoted item, that I would argue that these sites would be better off trying to find other ways to make money.

Something I learned from both working on projects and which is documented in my book Promotions Forecasting: Techniques for Forecast Adjustments in Software, and also in working with many people in marketing at a number of software vendors, people in marketing lie for a living.

And they lie about their contributions, consistently overstating them.

In the area of promotion management, marketing departments typically have no idea what the impact of their promotion is on sales. They make claims they can’t support the rest of the company, which justifies their salaries. This was rather shocking to learn. Before doing the research, I assumed that there was strong academic support for promotions, as they are such a fixture in so many companies. However, as explained in the book, the actual scholarly research into promotions shows mixed results.

And none of the marketing people I have ever worked with would have been able to read the research. And they don’t care anyway as promotions are how they help justify their positions.

Promotions are presented by marketing people in companies to the rest of the company as if they know they are beneficial, when, in fact, they have no idea.  I believe I am the first author to publish this fact (nearly all books on promotions are written by marketing authors who would never admit such a thing). Marketing departments routinely create forecasts on the basis of what they want to happen.

The Logic and Basis of Marketing Forecasts

The logic was explained to me by one marketing department that if say, for example, they wanted a 25% market share of a new tuna fish product they were rolling out, they would simply take 25% of the total sales including competitors, and place that as their forecast. All of this backstory is to explain that marketing as a matter, of course, overstate their powers not only to the general public but to people inside of their own companies.

Right now, anyone can search for marketing firms or assistance on Google and find an unlimited number of companies making exaggerated promises. This extends to marketing-related areas such as PR as well. When PR firms reach out to Brightwork Research & Analysis trying to introduce us to their clients when we check their websites they promise customers that they are “media whisperers” and can essentially manipulate media outlets to publish what they want, as I cover in the article How PR Firms Act as Parasites on the Media System.

Therefore, we cannot accept marketing claims around how they add value to FAANG without looking for evidence. Whatever marketing professionals say they can do, the reality is they can do less. Remember they work in marketing.

How Much Does Google Make From Surveillance?

Let us move to Google, which is second in revenues per customer. Google has revenues of roughly $180 per customer/user. And here we face another issue.

Facebook has revenues of around $112 for the US and Canada, but then $25 per user for the rest of the world. This is a bit confusing because Facebook reports out ARPU which is a quarterly figure. But we need to annualize this value as we are evaluating the annual financial benefit that comes from surveillance.

This is evidence of leveraging user data, and Facebook sells the rights for companies like Cambridge Analytica and many others to query its enormous database of privacy violations.

How Much Does Apple Make from Surveillance?

Finally, Apple is another complicated company to measure, because they have an online store, but then they also have iTunes, etc. So we will leave out their store where people buy things and just focus on services, which is at roughly $30 per user.

What is striking about this? Well, for all of the privacy violations that are going on, this is not a great deal of money. The only reason it adds up is that these platforms, mainly the first three, have such an enormous number of users.

Secondly, Amazon and Google are in unique positions, and it is unlikely that other companies will be able to replicate what they do because other entities are not the number one shopping platform and search engine in the world. Neither one looks to be displaced anytime soon.

FAANG is violating privacy left right and center. However, they get comparatively little for doing so. If their AI is so powerful, why are they not able to make more per user? And if regulations are put into place that restricts the resale of information or make the opt-out clauses more transparent, Facebook could be in for a precipitous decline. Facebook has, at this point, a toxic image and would be a likely target of regulation.

Secondly, this revenue per users is as good as it gets. It is not a replicable business model for many companies.

Thirdly, there is another way to sell more product rather than ransacking people’s private data. For instance, one could improve quality.