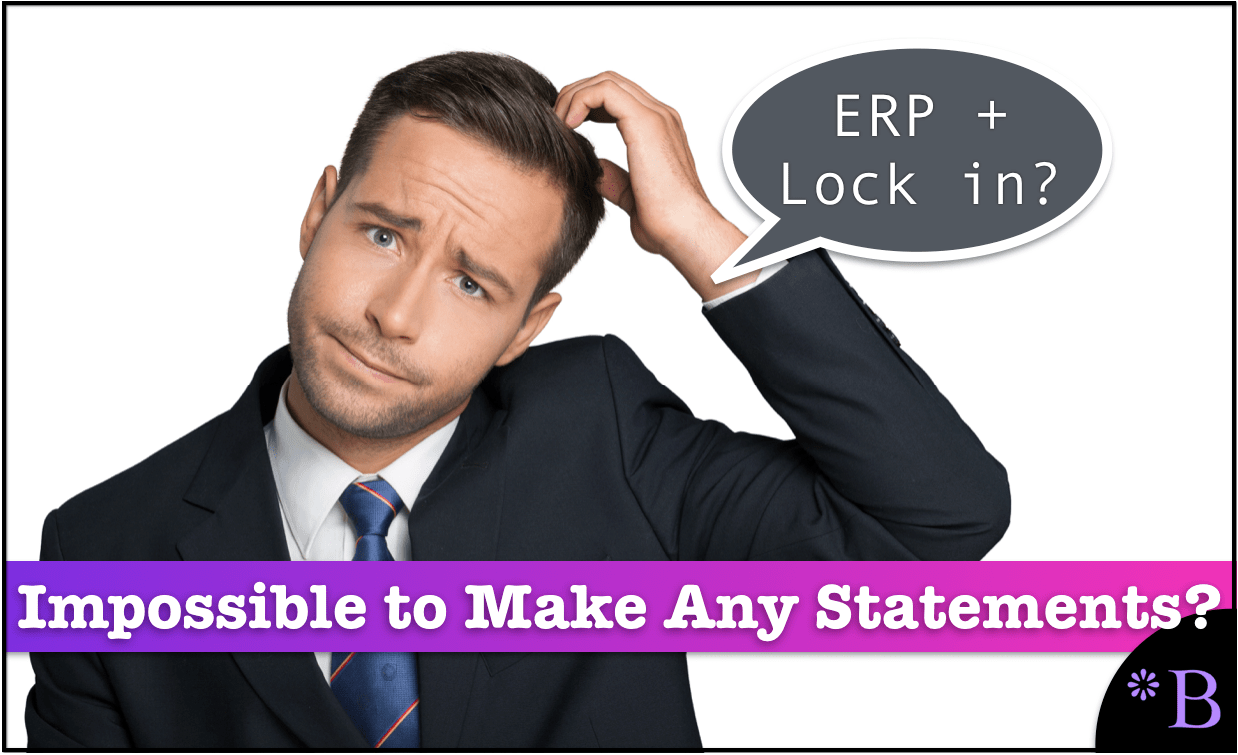 Closed source ERP advocates typically downplay the issues associated with lock-in. This comment is a perfect example of this line of reasoning.

Just to add too that we must remember that SAP and Oracle are very far from being the only ERP vendors in the world. The choice is almost limitless.

What Do We Know About Lock-In and ERP Systems?

We have very good evidence that the ERP vendors that can lock in their customers. We have very good evidence that the pattern of lock-in behavior extends beyond SAP/Oracle. Microsoft, Epicor, SAGE, and Infor all follow the same lock-in strategy, and now that Oracle sales have infiltrated Infor, it is basically Oracle. As for SAGE, they had a bad product reputation, but then acquired FinancialForce, one of my top-rated vendors for innovation. (See our Honest Vendor Ratings on Financial Force)
I would have to go through the list of ERP vendors, as there are a lot — but if we take just those six companies, they represent a good chunk of the overall ERP yearly sales.

If we have very large vendors who represent a high percentage of ERP sales and there is the first-hand experience of their lock-in behavior, then it is not an ethereal situation where we can’t make accurate, definitive statements about the negative implications of lock-in.

Here is the video that describes these consequences of private code for the government.

This video shows the ridiculousness of having governments, which are public institutions, purchasing private code applications from closed source vendors. If governments in the developed world agreed to use only open source, it would ignite the open source industry and change the dynamics in the private sector. It would massively increase the number of open source projects, better fund the existing open-source projects, go far to legitimize open source further a massively improve software implementation efficiency.

Paying Off the Influencers to Diminish Open Source

Naturally, the corrupt closed source vendors and consulting companies don’t like this, which is why they fund faux research entities like Gartner to try to convince corporate and government buyers not to use open source as we cover in the article How Gartner Undermines Open Source for its Own Benefit.

Open source has enormous successes in code, databases, operating systems, and many more — however, when Gartner creates a Magic Quadrant, they pretend they can’t even find an open-source database — unless the database is used by a commercial vendor — like Cloudera. We cover this exact topic in the article Can Anyone Make Sense of the ODMS Magic Quadrant?

Commercial vendors have a field day robbing the US and other governments around the world.

Are these governments easy pickings?

For example, the DOD cycles people through the systems division, so that very few employees have experience. Commercial vendors, combined with Accenture and Deloitte, pillage the government’s coffers.

Should the US Government get its act together? (which is the argument made by commercial ERP proponents that this is chiefly the fault of governments).

I also think so.

However, waste is not a bug in these projects. It is the feature. Open source would make it far more difficult for this waste to happen.

There are very good reasons to think that selecting open source ERP systems would massively increase the efficiency of ERP implementation, that they would reduce lock-in and correspondingly reduce waste. It is not true that general statements about the lock-in and wasteful nature of ERP vendors cannot be made. Are there closed source ERP vendors that don’t lock in their customers? Perhaps. I assume they must exist. But, those closed source ERP vendors that have the ability to lock in customers do so.