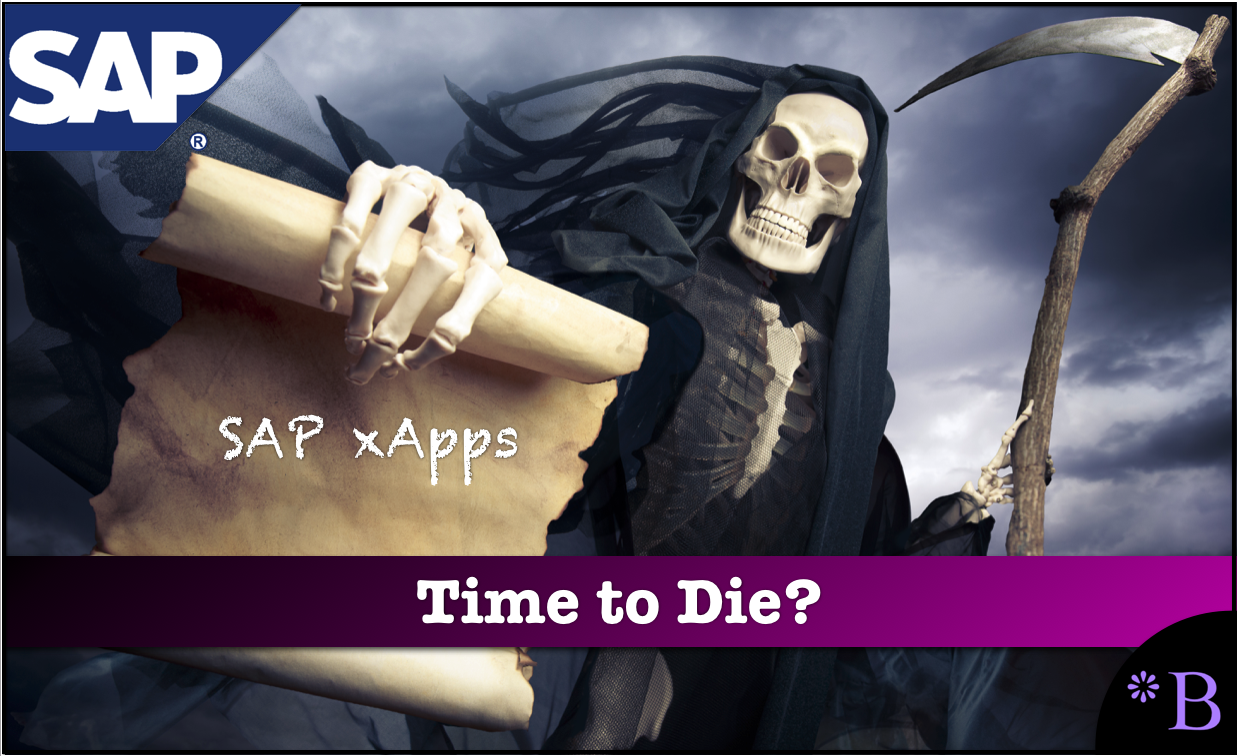 The SAP xApp program has been a commercial failure. This is good because the xApp program is not much more than a marketing agreement between SAP and smaller vendors. SAP co-opts best of breed vendors and provides them with more market exposure. It also confuses clients as to what software vendors are doing what and seems to violate the principle that the company doing software development receives compensation.

How The Arrangement Works

The xApp program is where software vendors agree to give over 40% of their revenue on a software sale to co-market with SAP and be brought into their accounts. However, it gets worse than even this. Software vendors that are on the SAP price list have to give over between 60 and 70% of the software license, and the money from the customer is first paid to SAP. SAP then is responsible for paying the third-party software vendor on a schedule that may not be immediate.

This program makes a lot of money for SAP, but is it right?

SAP has necessarily added a line of business over the past few years. That is of software reseller. Through various programs such as xApps, approved solutions, among others, SAP is now introducing software to its clients, and taking a percentage (anywhere from 40 to 70% of the software license. There happen to be several of these agreements that SAP has in the SCM space. The question arises as to why software companies would give such a hefty amount of money over to a competitor. The answer is that SAP gives these companies exposure that they would not ordinarily get.

The Problem with Being Resold by SAP

Something is very un-kosher about the most significant software vendor reselling other software and taking such a large chunk of money. Is SAP only using its monopoly position with customers to, in effect, sell access? This appears to be the case. Some analysts point out that these programs are useful because they help fill out the product line of SAP. The person who points this out needs to state who they are saying it is suitable for. It does not seem to be good for the third-party vendor or for the customer. Secondly, companies can do their research and find third-party solutions themselves. This is supposed to be the role of large consulting companies to help with this research, but the significant firms are so SAP biased, that they often do not do this role adequately. The issue is when high-status partners see third-party solutions as a threat to their revenues.

Large consulting companies have SAP resourced to sell, so small solutions get less focus. Also, how unbiased is this program? If say for instance, one third-party software company is on the price list, and another third-party company is not, even though the solution is better for the customer, wouldn’t only the company that is allowing SAP to take 1/2 of its license revenue always be recommended? Is the fact that SAP is making so much money from these deals being declared to the client? I do not think it is because if this were known, I don’t think clients would agree to it.

There are some problems with this xApps program, and they are listed below:

Issue #1: SAP Faking Functionality That Resides with the xApp Vendor

SAP can and does pretend that it has far more functionality that it does. So SAP salesmen can say that “we have that capability through our xApp,” which is another way of saying that they don’t have it at all.

The integration is almost always oversold. SAP invests very little in the integration process and creates just an essential enough integration to tell customers, “the solution is integrated.”

Issue #4: Creating Bastardized 1/2 Copies of the Best of Breed

With SAP taking 40% to 70% of the revenues for the software that was due to the creators of the software, the xApp program takes revenues from where the work was done and gives it to where it was not done, which is SAP. (That is interesting because I thought we were all about compensating the creators of intellectual property in the US system.)

The xApp program is just a Trojan horse by SAP. Through “working with” the third party vendors to integrate them into SAP, SAP eventually hopes to replace all of these vendors with their products, which will work eerily like the software of the third-party vendors. I show in this article on the history of advanced planning software much of the APO design appears to be taken from SAP’s joint venture with i2 Technologies in the late 1990s (listed below). SAP co-opted work from Commerce One before dumping them and effectively ending the company, and after evaluating SPP, I am noticing many concepts that seem directly copied from MCA Solutions. For vendors, partnerships with SAP never last long and often result in bad outcomes for the smaller vendor. Because SAP is so powerful, there is a lot of fear of speaking out against them, so these facts do not tend to get aired in published material or on the web. (If I worked for any of the large consulting companies, I would receive pressure from a senior partner to remove this article.)

This arrangement is decidedly anti-market and is essentially a concession granted to SAP due to its monopoly position in the marketplace. It is simply unfair to both be subjected to extensive free market drivel by people with little understanding of economics and then also observe the large anti-market conglomerates like SAP engage in monopolistic practices. It would be fair to say that SAP likes the free market about as much as Goldman Sacks does.

I believe at one time there somewhere around 140 xApps. How many there are currently is unknown to us as we no longer hear the term, and the term may have been changed by SAP and the program renamed. The area we know best is inventory optimization where SAP partnered with two firms, SmartOps and MCA Solutions. The three-year agreement with MCA has now expired. In the example of SmartOps, they provide the inventory optimization and SAP integrates to them. It’s important to understand that the inventory optimization capability is part of SmartOps’s product and does not have anything to do with any of SAP’s products. Instead, SAP integrates with SmartOps, as it would integrate into another application.

The Best Approach When Dealing with xApps

Only a thoroughly unethical company would create something like the xApp program.

SAP is asking that companies pay a toll to SAP for a minimal amount of work in creating partnerships with software firms. xApps have been unsuccessful in the marketplace, but less for the reasons listed above and more because SAP has a tough time working with other software vendors. The fact the SAP can even attempt such a program leads to the conclusion that SAP has become too big, and like Microsoft is now causing a negative or a smothering effect on the industry. In the US system, this is when the Federal Trade Commission is asked to come in and check to see if any anti-trust rules are being broken. The xApp program is a perfect example of a monopolistic entity throwing its weight around with smaller vendors.

As I write this addition, it is now two years since I stated that I thought it was time for the xApps program to die. At this point, I can confidently say the xApp program is dead. While there are a few vendors that are on SAP’s price list like SmartOps, in general, most vendors who wanted to have this partnership with SAP have already been burned, and the program is no longer active. I have declared this in the following prediction related to the end of the line for Solution Manager.