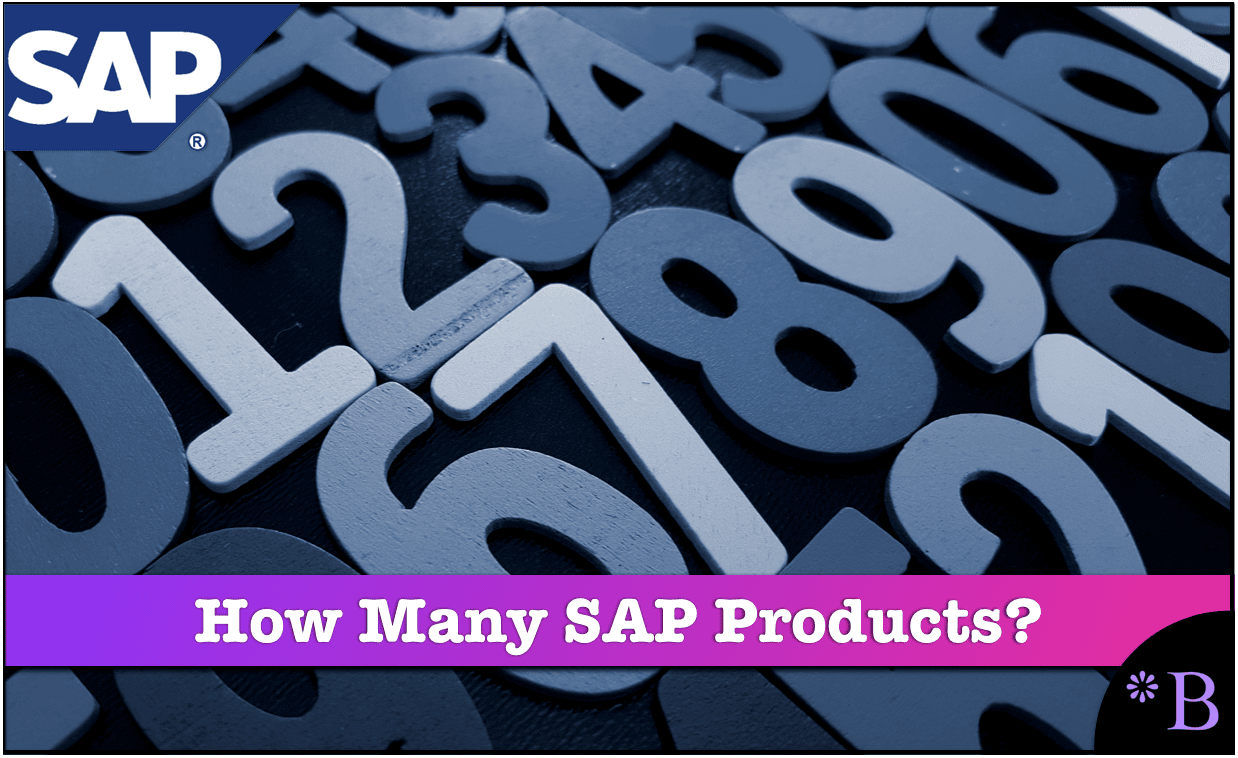 At Brightwork Research & Analysis, we place many hours per week researching SAP. However, it is a full-time job keeping up with SAP’s products and the constant flow of products they introduce. At one point, we asked the question of how many products SAP had. Therefore we decided to take SAP’s product database and to code it and then count it to find out. You will learn the overwhelming number of products that SAP produces and maintains.

Counting how many products SAP has is more complicated than it might seem at first blush. This is because SAP has many different products, some of which are part of the same product. For instance, SAP’s ECC application is currently divided into the following individual products.

However, this is all counted as SAP ECC. So is the right answer to count one product or to count six products?

We decided to count this as six products only because it is consistent with how SAP has broken out its product database products. When measured this way, SAP currently has 309 products.

There are also many ways to categorize SAP’s software product database. We were most interested in the following categories.

There is undoubtedly some judgment in assigning these codes per product.

For instance, some products like Business Objects definitively in the “driver of SAP revenues” category, while other products are more questionable as to which type they fall into. We applied our judgment from our longtime research into SAP.

We found the following interesting features of these categories.

This list does not adequately describe SAP’s offering’s complexity because, as explained in the book SAP Nation 2.0.

“Then there has been their own organic product growth, where SAP has released over 50 country specific SAP (ECC) baseline solutions in the latest SAP HANA enabled packages. SAP Business One, with over 50,000 smaller customers around the world is not exactly dead.”

“SAP may need to use its own inventory management system to manage its exploding list of SKUs. Customers complain that few of these products have been integrated to the core Business Suite, let alone with each other.”

SAP began as a company that offered an ERP system, but its financial success led it to sprawl into an unmanageable company. In this article, we will cover the issues with SAP’s sprawl.

One of the arguments used to sell SAP ERP was that it would eliminate the sprawl of mostly homegrown systems within companies. SAP sales reps often told customers that if they purchased SAP, it would be the only system they would ever need. This type of thinking is illuminated in the following quote from the book SAP Nation 2.0.

“SAP’s runaway success in the 90s came about because its R/3 product dramatically reduced enterprise sprawl. As Paul Melchiorre one of its most successful salespeople had noted in SAP Nation: “It was a truly transformation time for the technology industry. We replaced thousands of departmental and mainframe systems. We put MSA, M&D, and others out of business. We didn’t really have much competition. In deals it would be SAP v. SAP v. SAP — that is, SAP/Accenture, v. SAP/KPMG v. SAP/PwC.””

This quote came from a salesperson (so it should be viewed with skepticism), but looking at SAP’s product list, what does one see but sprawl? Seen this way, it is apparent that SAP had no interest in reducing sprawl but wanted to replace their customer’s “legacy” sprawl with SAP product sprawl.

But did SAP reduce sprawl?

“According to Panaya, a tool vendor,”More than 50% of SAP shops have 40+ satellite applications. Of these less than 10 are SAP applications.””

It certainly does not appear so.

This sprawl is further explained by the following quotation also from SAP Nation 2.0.

“Broadly, Rogow is pointing out that we do not have many independent thinkers in IT, especially considering how complex IT has become. The challenge is particularly acute in the SAP Universe with its fragmentation and sprawl. Many consulting and customer staff have spent their entire careers on SAP projects — in particular on older SAP products. They to the same SAP events year after year and repeat what SAP shows them.”

“At SAPPHIRE NOW, in May 2015, SAP Digital announced a new set of products including a CRM solution at $29 per user per month. SAP Claims to now have 17 million Jam users and 2,000 HANA start ups. The executives responsible for such SAP initiatives proudly brag about them, even though they contribute merely 1 to 2 percent of SAP revenues and they keep adding to the sprawl.”

What is curious about this is how much opposition to SAP’s massive product portfolio is versus the original proposal by SAP. Here is a quote from a salesperson from SAP from the book SAP Nation 2.0.

“SAP’s runaway success in the 90s came about because its R/3 product dramatically reduced enterprise sprawl. As Paul Melchiorre one of its most successful salespeople had noted in SAP Nation: “It was a truly transformation time for the technology industry. We replaced thousands of departmental and mainframe systems. We put MSA, M&D, and others out of business. We didn’t really have much competition. In deals it would be SAP v. SAP v. SAP — that is, SAP/Accenture, v. SAP/KPMG v. SAP/PwC.””

This quote came from a salesperson (so it should be viewed with skepticism), but looking at SAP’s product list, what does one see but sprawl? Seen this way, it is apparent that SAP had no interest in reducing sprawl but wanted to replace their customer’s “legacy” sprawl with SAP product sprawl.

The number we have calculated here is just the major products. If one counts the variants, then the quantity easily exceeds a thousand.

SAP has the same issue which plagues supermarkets. They have too many SKUs. This occurs when an organization is more sales and marketing focused than operations focused. Having so many SKUs in so many areas of enterprise software means that SAP lacks focus. But this is the natural occurrence when large software companies age. Oracle also has too many SKUs.

When SAP was selling its ERP system, it would often say that all of the systems a company had were legacy, as we cover in the article How SAP Used and Abused the Term Legacy. They said that companies could replace all of their “legacy” sprawl with a single system — their ERP system, which was the last system any company would ever need. SAP told companies that everything would be integrated; the entirety of the ERP system sat on a single database, and the ERP system would meet all of the company’s needs. There would never be a need to connect another system to the ERP system, and therefore integration as a function would disappear. (see the book at the end of this article that explains how each of the arguments used to justify ERP systems ended up being nothing more than unsubstantiated sales pitches.)

The only people who say that SAP reduced sprawl are those that either work in sales or SAP project management. Right after SAP sold its ERP system based on reducing sprawl, it was found that SAP’s claims regarding sprawl reduction were false, and SAP began aggressively increasingly sprawl, as it desired to sell ever more products into companies. This undermined the initial ERP sale’s entire argument that the ERP system was the only system that any customer would ever need.

This issue intersects with the number of SAP products. By introducing so many products (remember many of SAP’s new products don’t survive — and eventually fall off of the price list), it means that many consulting firms have no experience implementing many of the products they are being asked questions about. This issue comes up on many SAP projects where applications are sold that sound great but have minimal implementation history. 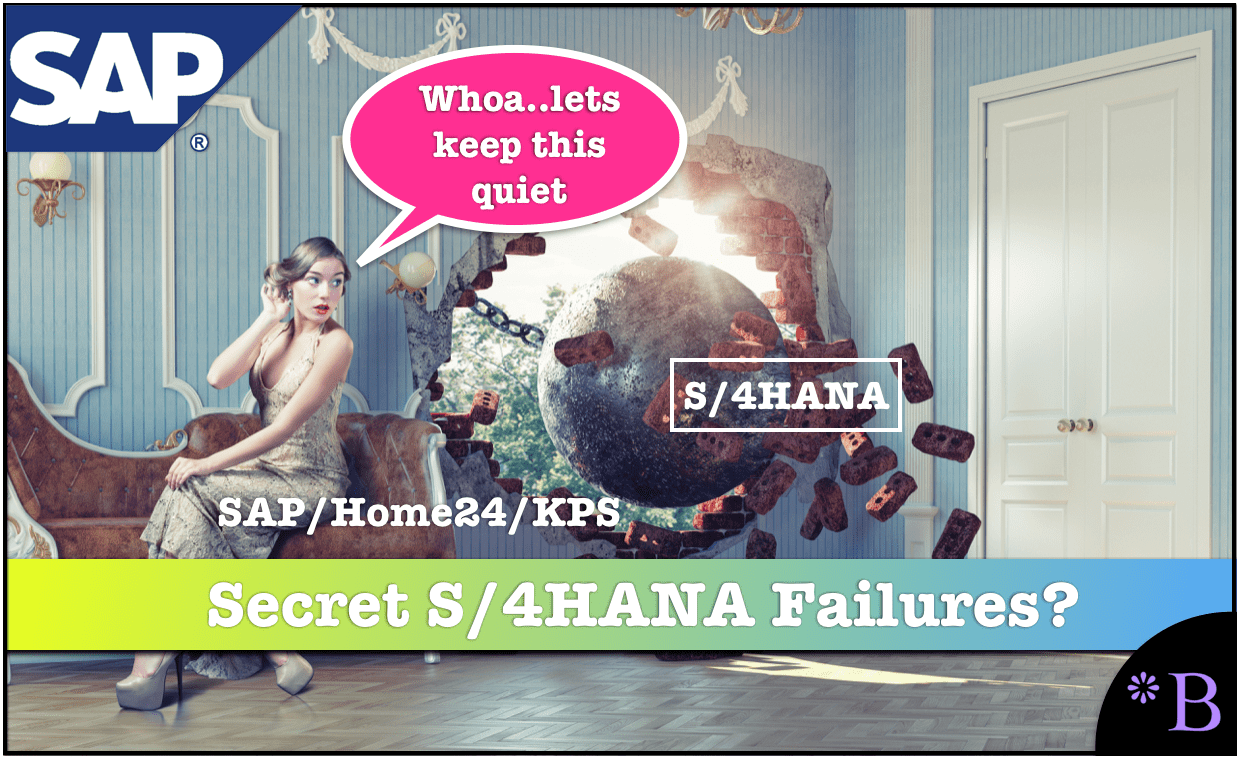 This issue is demonstrated clearly in the Home24 failure that we cover in the article The Hidden S/4HANA Home24 and KPS Failure. The sales BOM purchased by Home24 was highly risky. Many of the BOM items did not have an implementation history, and S/4HANA, the centerpiece product in the BOM, has had a very high failure rate in implementation.

This is why so many requests go out for SAP skills that do not exist in the market. SAP and the SAP consulting firm have given the customer the impression that the application is far more widely implemented than it actually is.