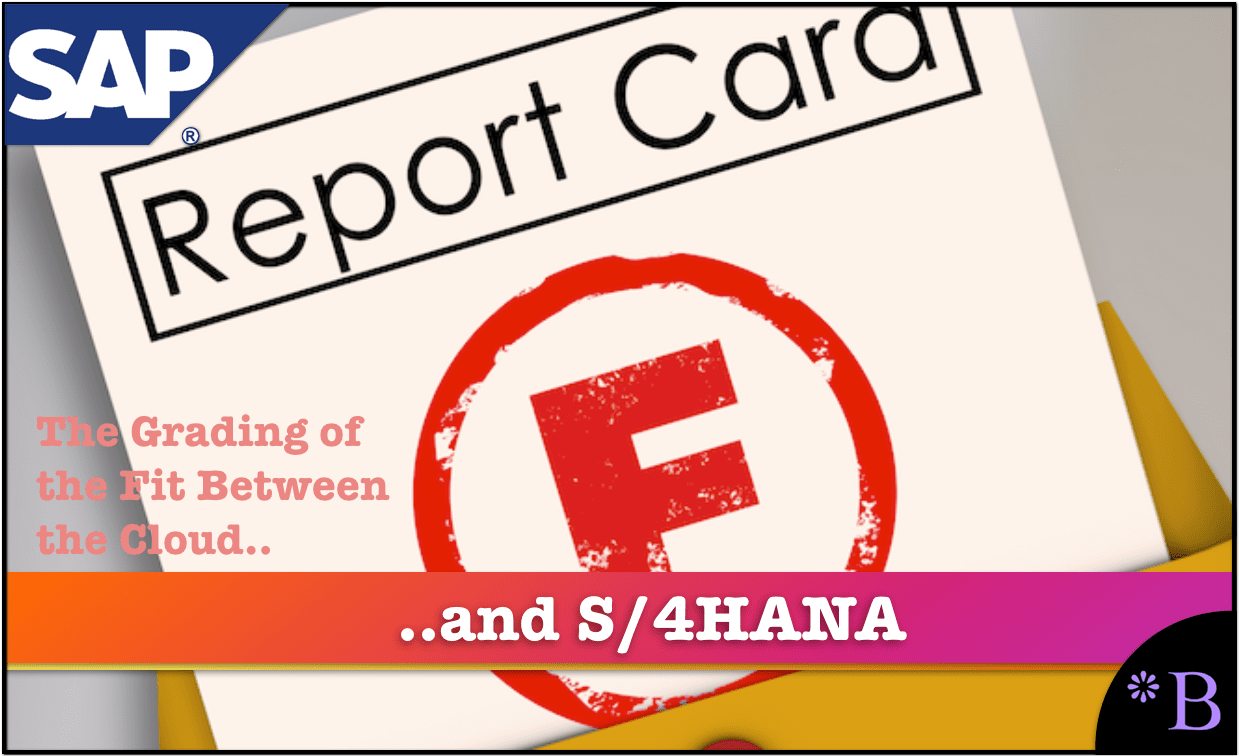 Video Introduction: The Real Story on Cloud and S/4HANA

While researching the actual history of S/4HANA implementations, something that came to the surface is how rare it was for S/4HANA implementations to be in the cloud. This is curious because so much of SAP’s marketing around S/4HANA has been used promoting S/4HANA Cloud as an application that is flexibly deployed. Something else of note is that even when S/4HANA is implemented not on premises, it is still not cloud, as it is not multitenant as SAP does not have the ability to have S/4HANA work this way. These implementations are simply S/4HANA hosted in a data center of an SAP partner rather than hosted on the premises of the client, which only serves to increase costs. You will learn the real story of the applicability of the S/4HANA Cloud to the cloud.

What is the Cloud or SaaS?

Many people think that the cloud, aka SaaS, is undefinable and or that any claim by a vendor that something is cloud should be accepted as true. However, SaaS is very well defined. The terms SaaS and cloud are quite often used interchangeably. So while not entirely overlapping, they will be considered synonyms for this review.

Important supporting words are as follows:

Understanding the Interrelationships of SaaS

The interrelationships will be reviewed in this paper.

All of these terms have different origins. All are adjectives to define better a software instance, which is a “hosted” service with a single tenant as opposed to multi-tenant, which is one of the basic requirements for SaaS.

The problem with this term is that “private cloud” is that it’s a bit of a misnomer because the word does not fit the definition of cloud computing. Cloud computing both implies and requires shared resources.  Regardless, private clouds are often lauded for their improved security. Still, they have a fundamental limitation. They do not offer the many benefits of the cloud, public cloud, or SaaS, and they do not scale well.

The Wikipedia Definition of Private Cloud

Wikipedia has a good description of private cloud, which states “they have attracted criticism because customers “still have to buy, build, and manage them.” And thus do not benefit from less hands-on management, substantially “[lacking] the economic model that makes Cloud computing such an intriguing concept.”

SAP’s marketing materials show many cloud-based third-party applications. However, SAP does little of its hosting except for its newly acquired applications that were already cloud-based before they were purchased. Therefore, most of SAP’s database and applications revenue is from applications not in the cloud. S/4HANA Cloud matches this pattern by having very few customers.

There is no doubt that Concur, Fieldglass, Ariba, and SuccessFactors are delivered via SaaS. Those vendors have traditionally been delivered through SaaS. But they are much more straightforward applications than an ERP system. However, S/4HANA Cloud is not delivered through SaaS to many companies or companies of considerable size. The larger the company, generally the larger and more complex the requirements, and the more need for customization, which moves the company away from using SaaS ERP applications, including S/4HANA Cloud.

No Customization a Foundation for SaaS

SaaS customization was first reviewed in the section on multi-tenancy (i.e., One Code Base — Multi and Single Tenancy). SaaS’s underlying data model and system architecture are not customizable. “No Customization” allows the SaaS software vendor to spend less time dealing with various platform patching, compatibility issues, and individual upgrades.

A true SaaS vendor is supposed to upgrade a single instance, which then updates all customers simultaneously. This should then imply fewer support expenses.

The Reality of No Customization of And ERP System

SaaS applications tend to predominantly be simple applications that are not customized for each client. The fertile areas of SaaS tend to be applications such as the bill of materials management, CRM, HRMS, travel and expense, online meetings, and email.

However, the current trend indicates that software vendors are increasingly moving more complicated applications, which have a long history of being customized to the cloud.

That being said, we do not foresee that the need for customizations will abruptly come to an end just because applications move to the cloud.  For example, SAP’s ERP system, called ECC, is either highly or moderately customized in 92 percent of instances. SAP’s replacement for ECC, called S/4HANA, will be made available in the cloud.

However, serious questions remain concerning customization and how these customizations will be ported to a SaaS environment proposed by S/4HANA Cloud. Such issues are already starting to emerge.

For example, the following excerpt from a recent review of S4 HANA Cloud shows these questions arising:

“I’m examining the degree of “SaaSiness” within the scope of S4 HANA – I’m not using it as a standard in comparison to other non-SAP SaaS applications. There are definitely other “purer” SaaS applications in the market but such a comparison isn’t the focus of this piece. Although there are theoretically pure “Private” and “Public” versions of S4 HANA, company-specific manifestations will probably emerge that combine various characteristics of each extreme.

For example, one SI may allow greater customizing for customers at the expense of a weaker SLA or at a higher cost.  Furthermore, a company/SI could have multiple S4 HANA-related offers to meet the needs of different customers/business requirements.” – Diginomica

In my view, this industry expert is granting SAP SaaS status before SAP has proven this capability. This expert even states that he is not focusing on how pure S/4HANA is for SaaS because it is not the focus of his attention. However, he is assuming S/4HANA Cloud is SaaS or presenting it as such. I do not see who would care what the focus of his attention is or isn’t. Something either meets a definition of a term, or it does not.

Will SAP Be Actually Providing Hosting?

In most cases, though, SAP will not be doing the hosting. There may be cases where the instance is hosted by a firm such as AWS. (In that case, it is also not multi-tenant.) This expert points this third-party hosting capability out in a different part of his article:

“However, there is no reason why a partner couldn’t duplicate this offer for its customers – even exploiting HANA’s multi-tenancy feature included as part of SP9.”

S/4HANA is currently going through a rapid development cycle, with new functionality being released each quarter. The S/4HANA Cloud version lags the S/4HANA on-premises version. It is likely that even when this cycle slows, there will be SAP customers on different versions of this ERP system.

Can S/4HANA Be a Cloud/SaaS Application?

S/4HANA will, in most cases, be implemented with customization requirements. This precludes S/4HANA from being a true SaaS application. SAP also does not follow most of the other SaaS characteristics, and this categorizes S/4HANA as a non-SaaS application. Only the smallest customers will be able to use S/4HANA in a non-customized way. However, S/4HANA is a Rolex watch regarding cost and complexity. ECC had the highest TCO of any ERP system.

See details on the TCO of ECC in the online TCO calculators at this link.

A Top Cloud ERP Vendor’s View on Customization and SaaS

I wanted to get another viewpoint on this conflict between customization and SaaS delivery and S/4HANA Cloud and the standard requirement for customization in the ERP software category. So I reached out to Rushabh Mehta, who leads ERPNext and whom I happen to know, has quite a few customers on SaaS delivery for their software. He had this to say on the topic.

“The problem of mass customization, which seems intractable from a pure SAAS point of view, is solvable with a plug-in architecture. An Cloud ERP does not have to be pure multi-tenant, but multi-tenancy can be built on basis of virtualization so you can technically run a multi-tenant cloud with each customer in a separate VM running own set of plug-ins. This would still be some kind of a hybrid “cloud” as long as all customers get upgraded simultaneously. I think it is possible, though I have no idea how “pluggable” is the S/4HANA architecture is.”

Pluggable means that extensions or add-ins from outside vendors can be easily added to the core product. S/4HANA architecture is not pluggable. It is, in fact, the exact opposite of pluggable.

This is a critical distinction to understand because SAP has, for years, made it difficult to connect applications to its software. This is used to create a barrier to entry to push customers back using other non-ERP SAP applications. Software companies develop integrations to SAP ERP, but these are not plug-ins, so that is a different topic.

Customization is written in ABAP to pull in functionality from pre-existing applications the company wrote or enhancements to ERP. These are one-off and are not shared or at least very little shared between clients.

Let us get back to another quote from Rushabh:

“From the other side, I don’t think any vendor has been able to fix this problem, even for small businesses. The reason in my view is that the incentive for revenue is stacked up in the favor of large-scale customization (emphasis added). So from the SAP point of view, even if they could pull of a common code-base across the cloud with a really cool plug-in architecture, their heart can never be in it, because it’s a recipe to kill their revenue. Companies can spend ~1% of their annual expense on their ERP system and SAP wants to collect all of that tax/rent.”

Is SAP Going to Open Up?

SAP will often give lip service to opening and allowing more interoperability with other vendors. For instance, they talked a good game with SOA. They talk a good game about partnering with software vendors. However, they undermined those partnerships and tried to get companies not to buy from their “partners.” I covered this topic quite extensively from indirect access in many articles, one being How SAP is Now Strip Mining its Customers.

“That is the core of the problem – not only for SAP but also the entire ERP industry – There is just too much money on the table (esp for large companies) and they see no reason to push for mass customization when customers are ready to pay for re-inventing the wheel every single time.”

SAP does not make much money from customizations, but the SAP consulting companies do.

My take is a bit different from Rushabh’s here. My view is that SAP can only bring out so much functionality, and it cannot (obviously) meet all requirements. To Rushabh’s earlier point, SAP has no plug-in architecture to allow other companies to come in and develop add-ons to ECC/S/4HANA. The approach with SAP has been one-off customizations.

SAP’s strategy with S/4HANA Cloud, or delivered by SaaS, does not make any sense. It is not currently working and is unlikely to work in the future. The strategy appears to have been hatched by SAP marketing to appeal to Wall Street and seem leading edge, without considering what makes an actual SaaS solution beneficial over a hosted or private cloud.

We predict that SAP will continue to pretend it has a viable “SaaS” option available. But will merely end up hosting/private cloud managing S/4HANA for some companies because the benefits of doing so will continue to obtain a higher multiple for their stock price. SAP receives a 1 out of 10 for its accuracy on S/4HANA Cloud.