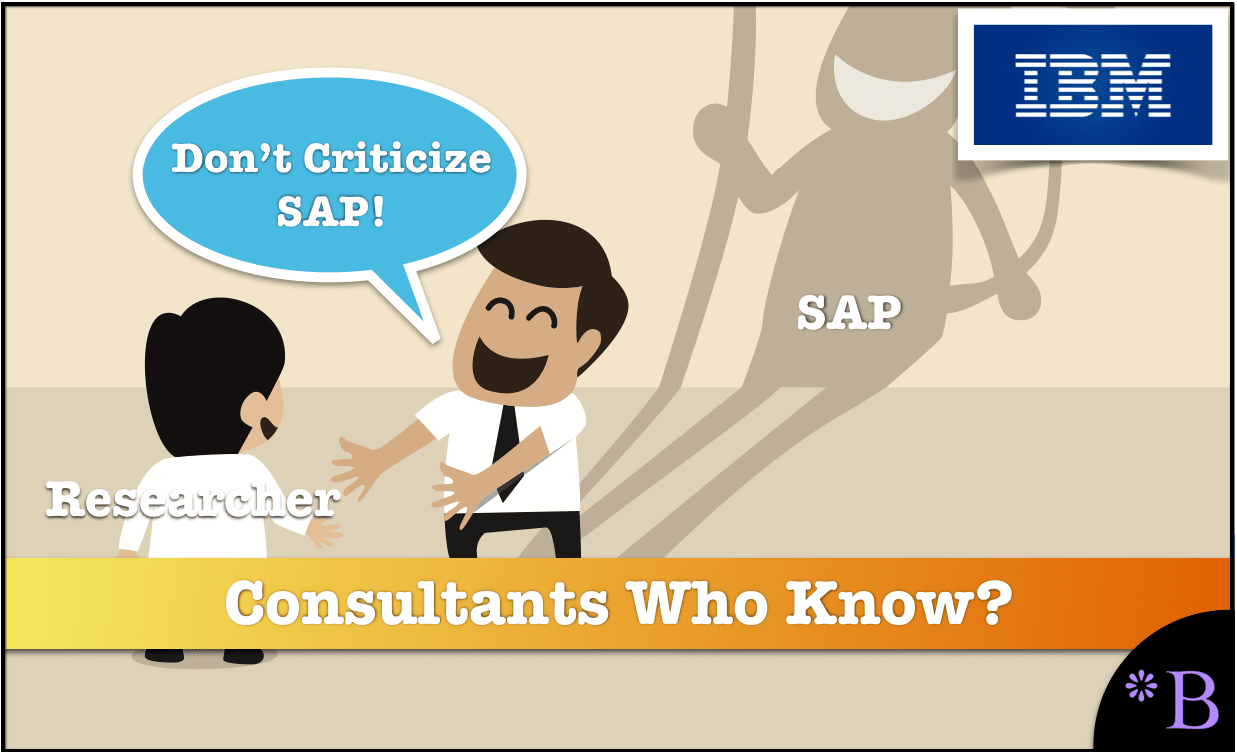 Curiously, so many consultants that work for major SAP consulting firms think that their employer lies, but they continue to work for them anyway.

An IBM Employee Who Admits IBM is Dishonest

In this article, we will cover one individual from a current employee of IBM. This information about how this employee thought came through a debate. Here is the introduction to the topics we were discussing, and this is my quote below:

Next, I will ask for what claim lacks merit. Look at my comment above. What does it say? SAP Analytics Cloud is an immature product that is quite expensive, yet it is being promoted by SAP and IBM on projects regardless of how competitive the product is. Secondly, please check my accuracy in predictions of SAP over the past 10 years versus SAP. Take a guess how your or your employers would compare against my accuracy. Take a guess who jumped on the Run Simple campaign — would that be Brightwork or IBM? – Shaun Snapp

The reply was interesting.

I will accept IBM is dishonest, SAP is thug just show me independent data. You can not be the judge, lawyer and the complainant. Ur ratings are just as bogus as your insane claims. – Prasenji Bist

The “insane claims” were claims around SAP and IBM.

The general definition of an insane claim, according to Prasenji Bist, is any claim that this IBM employee disagrees with. We have documented the issues with SAP extensively, but Prasenji Bist requested “independent data,” without understanding that Brightwork Research & Analysis is independent. Prasenji Bist does not know the IT media system, but what he does no realize is that nearly all of the IT media entities consider IBM a customer. Both Forrester and Gartner take large amounts of money from IBM.

Who is Allowed to Criticize IBM and SAP?

This seems quite black and white.

This IBM employee both states that IBM is dishonest, and that SAP often behaves like a thug. However, even though he does consider SAP thuggish, he does not think that Brightwork Research & Analysis has a right to criticize SAP. Furthermore, although IBM is dishonest in the mind of this IBM employee, he also does not think that Brightwork Research & Analysis should be criticizing IBM.

The question arises, why is it ok for an IBM employee to do so but not for Brightwork Research & Analysis to do so?

Furthermore, under what logic does an IBM employee deny the rights to others to critique either SAP or IBM?

This IBM employee goes on to say that he thinks SAP HANA is a scam.

SAP HANA is the Fraud of the Decade?

I agree HANA is nearly close to a SAP fraud of the decade but not everything is bad, not all SIs are thugs and just because we work for IBM we are not liars. – Prasenji Bist

However, that is never what I proposed. I never said that all people that work for SIs are thugs and liars. The policy of companies is not set by most of the employees, and the management sets it. To say that VW cheated on emissions, does not mean that every person who works at VW cheated on vehicle emissions. There is a distinction between the actions of the company and the actions of employees. It is well known that policy is set by management. This is getting to a problem either with English comprehension or is deliberately misstating my statement.

There is no place in any of the articles published at Brightwork Research & Analysis that propose this.

This employee’s logic is that people cannot disagree with SAP or IBM because if they do, they are the “judge, lawyer, and complainant.” (normally “complainant” this would be “plaintiff”). Furthermore, it is tough to see how this standard would not simply block out all criticism. This is because any person who makes any critical statement could be accused of acting as “judge, lawyer, and the complainant.”

What this IBM employee does not seem to realize is that freedom of speech allows someone to disagree, and to publicly oppose and criticize IBM or SAP or any other entity for that matter.

This is an issue with people who are raised in countries that score very low in press freedom when they speak to someone in a developed country with freedom of the press that they presume that the press freedom should be what is reflected in their home country. This employee is originally from India.

How Does India Score in Press Freedom?

Should this level of press freedom, India/South Sudan be the standard that is applied to those publishing outside of these countries?

Brightwork Research & Analysis publishes out of the US, and while others can read the website, the primary readership is in the US and Europe. LinkedIn is also based in the US. No media entity that serves an international market would be based in India because India does not respect press freedoms. Unfortunately, because India lacks press freedoms, the Indians that live in India or that migrated from the country also tend to apply the Indian press standard as they have become habituated to this low level of press freedom. 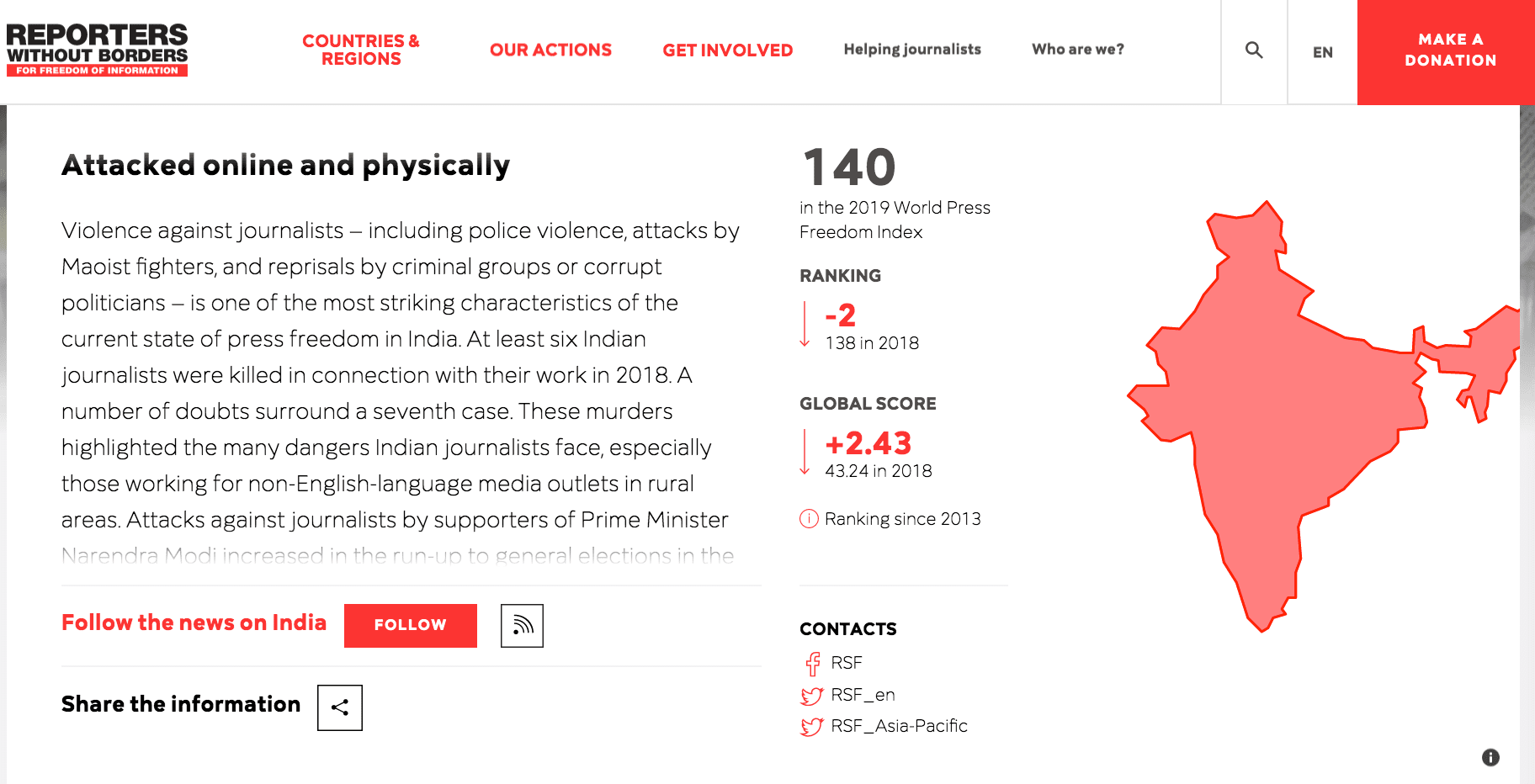 People in India have very little freedom of speech, and it is scarce to criticize the government or particularly large businesses.

Interestingly, this IBM employee seems to be implying that he should have the right to determine what is and what is not published. Most Indians seem to think that there should not be freedom of speech. They generally want the freedom of speech in India applied internationally. No doubt, most Indians would oppose the publication of this article.