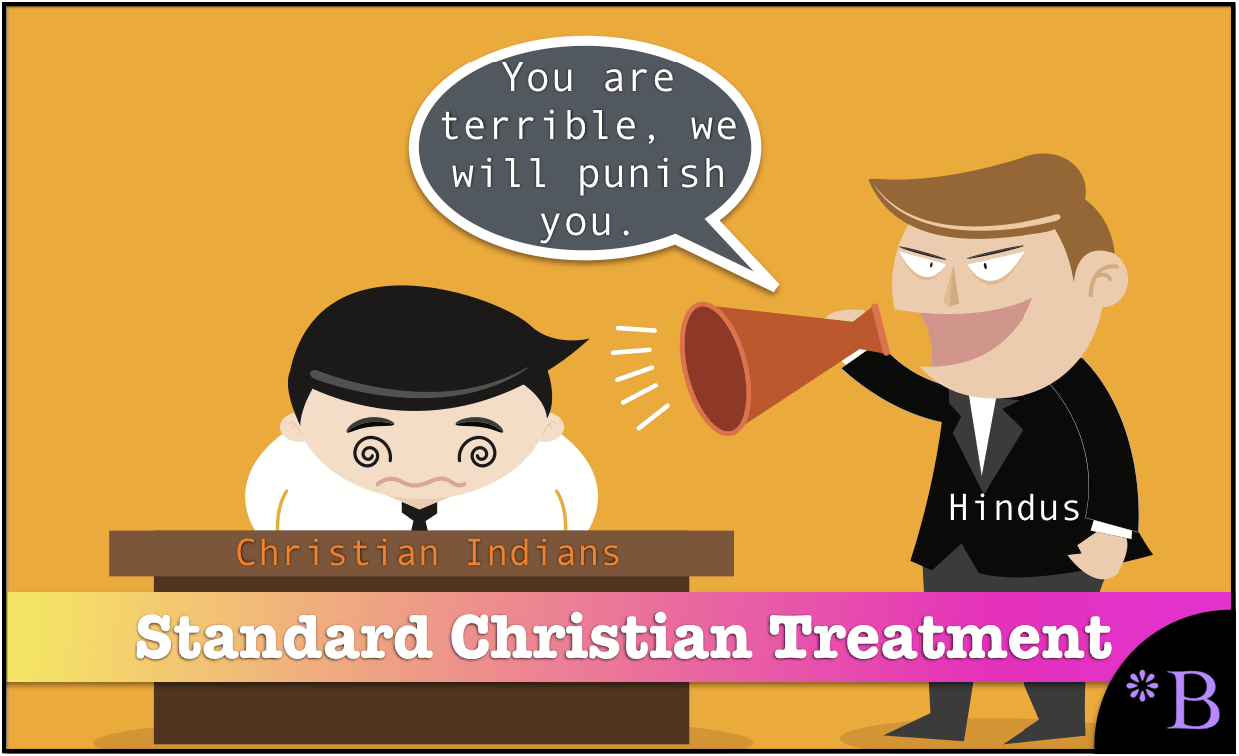 Those companies that place IT contractors have a lot of control over those contractors. This is a story that I have not heard of before where the Indian recruiter or handler asks for classified US documents to be sent to them.

See our references for this article and other articles on Indian IT Discrimination at this link.

A Story from the Perspective of a Christian Indian

See the following quotation from a person with information from working with Pratt & Whitney in the defense (that is non-commercial) side of their business.

I have faced discrimination in India all my life and longed to move to a country where my religion would not be a cause for discrimination. I had been dreaming of coming to the USA since I was a little child. I had my schooling in a Scottish Christian School  in India. When I joined Engineering college, I was only one of 10 or so Christians in the entire campus of over a 1000 students and that’s when I was the subject of hatred and discrimination. When I graduated with a degree in Electronics, I went from door to door seeking a job in the field (Electronics was in high demand at the time) and they would just hand me back my resume after reading the first line (which clearly tells them that I am a Christian) telling me that there are no openings. In just a few days after that I heard that most of those companies hired hundreds of new graduates. I finally got an internship job in one of the companies where one of the business partners was a Christian. I saw no opportunities outside of that company and they didn’t even pay me a living wage. I had to get help from my mother to pay the rent and other expenses. So I decided to come to the US. I married a US citizen (Indian origin) and came over in 1991.

The Importance of This Story

It is very difficult to find these stories in the Indian media. India’s media is highly censored, and India still has Britain’s sedition laws on the books that were passed under British rule. That is over 70 years after independence, and with all of the examples of freedom of speech in other countries, the Indian elites preferred to keep their ability to suppress speech. For this reason, the massively different aspects of discrimination that are part of everyday life in India are generally not known outside of India. Often discrimination in India is associated with the caste system — however, this is only one of the many dimensions of discrimination in India. 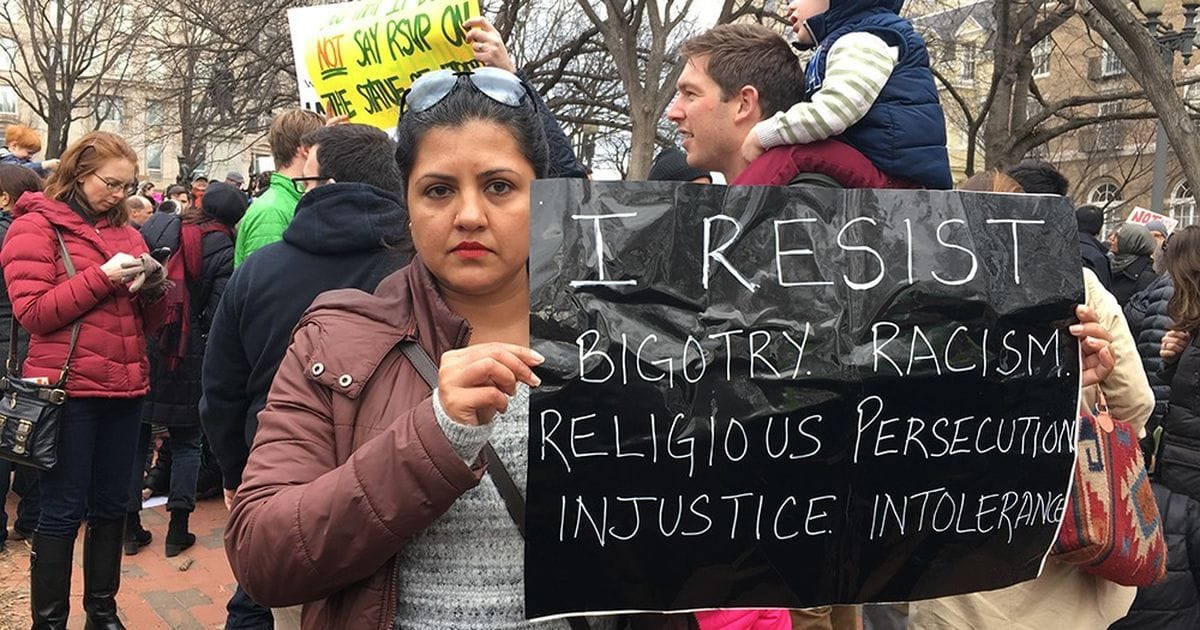 Notice this woman’s sign. She may be of Indian descent or Pakistani, but its obvious where her region of origin is. Yet she is protesting against intolerance, injustice, etc. in a European based society. Is it true that India/Pakistan/Bangladesh, etc.. her home country has made more progress in the things she is protesting against in a European country?

The answer is no. For example, India is routinely rated as one of the worst places to be female. But is she in India protesting for more rights for women? No, and if she did, it would not be tolerated for very long.

We may find that if we look into her background, she is part of a dominant group in the country she emigrated from, that has been discriminating against another group (as the Indian Hindus have against others) or she may be a Brahmin caste member that has been discriminating against lower cases for thousands of years. (For instance, if you discuss discrimination with a Brahmin caste member, they usually allocate any benefits they have received in life to superior Brahmin intelligence and never to caste discrimination.)

However, by claiming to be against discrimination in a European based country, she can claim victim status, which most likely would not stand up under scrutiny. Luckily, most that would report on this don’t ever scrutinize people from other countries.

“I resist bigotry, racism, etc..” but only from the safety of European based countries (which I am also criticizing) and only if I can play the victim card.”

Muslim Who Support Sharia Law Fighting for Women’s Rights in the US?

During The Woman’s March in 2016, which was primarily a protest against Trump’s election for his misogyny, Linda Sarsour, a Muslim, was introduced as a speaker. Linda Sarsour is a Muslim and supports Sharia Law, which she has said she wants to be instituted in the US. Sharia Law declares that for one, women who are found guilty of adultery be stoned to death.

Yet she claims to be part of the “woman’s movement” in the US.

Can a person who supports the institution of Sharia Law in the US, and who would never protest in their own country as they would be beaten and then jailed really claim to be part of a progressive non-discriminatory movement? One can try protesting in Saudi Arabia or Bahrain — but let’s just say, don’t bother packing a lunch, because it won’t be tolerated for very long.

Again, Linda Sarsour can skate by on the ignorance of a large portion of the American population of how things work in Muslim countries. So the US will be getting the progressiveness of Qatar or Jordan?

Facing Discrimination in the US

The story goes on, and now how this individual feels he receives discrimination again from Hindu Indians.

I went to graduate for many years part time while working in a factory full time. I paid my tuition from what I earned from the factory work where I put in 60 hours a week. I attended night classes and would come home often at 12 midnight after my classes and lab work at Penn State Malvern Center. Finally after few years of juggling both work and studies, I landed a job for quite a decent income in 1997. The manager who hired me did not have a racist bone in his body. He was fair and treated me with respect. He always encouraged me and often told me that I am the best programmer he has ever hired. For the next three years everything was going fine until just before 2000, a ton load of H1B people arrived from India for the Y2K project.(emphasis added) They never left. After that I had to try ten times as hard to find newer and better paying jobs.

They made the wage level go way down.(emphasis added) In the past, while it was easy to find another job within a day or so, now it takes for ever and is almost impossible to find a job. I had been quite lucky to continue to have employment because when I worked for “ABC company”, I was found to be the best programmer there as well. They laid off a lot of programmer over the years while they kept outsourcing to predatory Indian companies. I was finally let go in 2016 by “ABC company”. I was the last full time SAP programmer at the time and I never thought I would be let go. But the greedy manager wanted to save money and replaced me with cheap labor from an Indian (Ironically) Hindu company.

“ABC company” instructed an Indian consulting/outsourcing firm to hire me for at least a year for them to get the contract so that they can have a smooth transition.

So the Indian consulting/outsourcing firm hired me and I joined for a lower salary because by then it was difficult to find another job, After a year or so, they placed me at a company in a job function where I had absolutely no experience. ( my belief is that I they wanted me to fail). But I was determined to make it work. I studied the new function for 20 hours a day and pretty much mastered it. (Two other people that Indian consulting/outsourcing firm placed before me in that job actually quit, because they could not do it. I thought of quitting multiple times but at the same time I was determined to try my best and I succeeded.

When the company spun off the division I was working for, I had to leave that position. I was waiting for the the day they would lay me off, but suddenly when Trump signed the executive order to delay H1 B, I got several calls from Indian consulting/outsourcing firm within 24 hours and I decided to go with “ABC company” (through Indian consulting/outsourcing firm) . Now my days are numbered. When the executive order expires in December, they are going to bring back all the H1B people. All of them are Hindus and they don’t eve talk to me. They are only keeping me because I am highly competitive in what I do. I’m not bragging (I hate to brag) or exaggerating but I’m telling you this that that only reason why I have been surviving is because of my tenacity and hard work.

Most of my co-workers who are on H1B try to avoid me, even though I try my best to be cordial with them. If they need to chop, I’m pretty sure, I”ll be the first one to be let go. My son who has been an excellent programmer since the age of 7 decided to not go for computer science major and is instead going to Economics.

Implications of the Story

This story describes a person who finds freedom from Hindu Indian discrimination in the US, only to lose that freedom once the US becomes highly populated by Hindu Indian H1-Bs, who take over his area. Hindu Indians seem to do the same thing to Christian Indians as they do to US domestic workers, in that they target their jobs for replacement by Hindu Indian H1-Bs.

The overall story sounds something like the Mafia, where Hindu Indians coordinate with one another to control who has access to the job market in India and the US.

The Effect of Depressing Wages

Another feature of the story is that the large importation of Indian H1-B workers depresses the wages for this individual. This is the natural consequence of increasing the availability of labor when demand stays the same. In article after article in establishment IT media entities, the argument of the necessity for importing skills from foreign workers is made, without any statements about what will happen to wages if roughly 300,000 workers are imported into the US every year under the combined foreign worker programs. This is a topic covered in the article How the Number of H1-Bs Imported Outnumbers the Number of Jobs Created in the IT/Tech Industry, and How the H1-B Program Understates The True Number of Yearly H1-B Visas.

Yet, the establishment media, which exists to receive income from multinational and to deceive its readers on behalf of their sponsors, pretends that the laws of supply and demand do not exist.

Discrimination is a way of life in India. This is not well known in Western circles because first, most Westerners don’t know very much about India, and second, the Indian media is highly censored. Injustices in India do not get out as they do in Western countries that have a less constrained press.