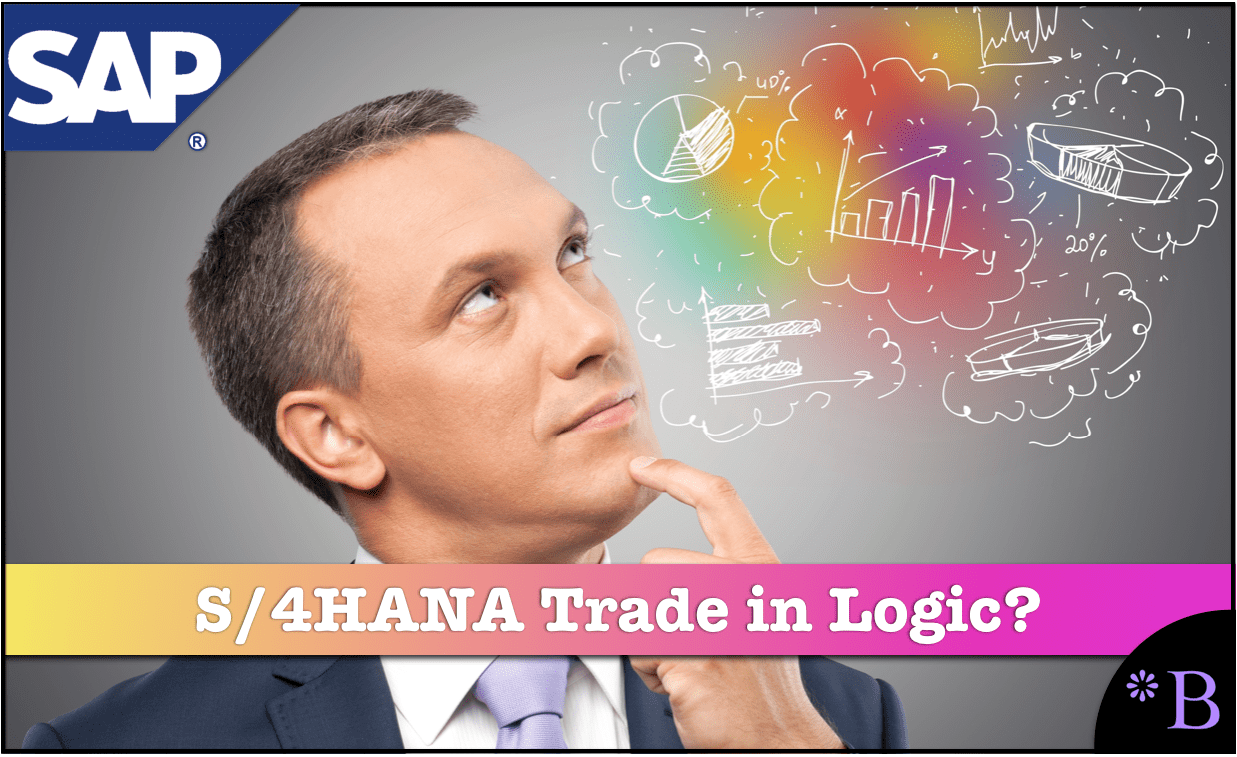 In this article, we will evaluate a strategy that is proposed by Snow Software on their website. Snow Software makes software that is used for auditing SAP software. The article by Snow Software is quite interesting and is very specific in what it proposes, and it provides specific recommendations.

I want to set the table properly before we get into Snow Software’s article. I don’t have anything against Snow Software. I happen to like a lot of the articles on their website, and several weeks ago I read every one of their articles related to SAP and quite a few others not related to SAP. Snow Software has a blog that brings in some authors with different license domain expertise.

I don’t happen to agree with the recommendations in this article, and I invite a representative from Snow Software to comment on this article and to have a collegial discussion. These are involved topics, and even people who are knowledgeable in the area can disagree, and that is quite reasonable.

The logic for Snow Software’s proposal is laid out in their article Use S/4HANA to Get Rid of your SAP Shelfware?

In that article they layout the following logic for purchasing S/4HANA. Let us get into their quotations.

“SAP Business Suite 4 SAP HANA. S/4HANA, for short, is SAP’s latest technology. But it’s also much more than that. S/4HANA represents a fundamental shift in how the mega vendor will generate long-term revenue streams. What is often less-discussed is what S/4HANA means for you, the customer. Not only in terms of technology; but in terms of an opportunity to reshape your relationship with SAP. Without over-dramatizing things, it’s a once-in-a-lifetime opportunity. Why? Because SAP needs S/4HANA to be a success. It needs to demonstrate to investors that it has a business model that is not stuck in the era of on-premise perpetual software licensing. And because it needs to sell S/4HANA licenses, it is offering excellent deals to existing SAP customers to move fast.”

So, what can be seen as left out is that S/4HANA has not been a success and it has had plenty of time to become one. It has a massive installed base (with ECC/Business All in One).

Now, while it is true that SAP has a strong desire to show that its business model is not suck in an on-premises state, SAP really has Wall Street fooled already on this topic. SAP has successfully adopted cloud speak, and is constantly cloud washing their products. The more you cloud wash, the more Wall Street rewards you. So we have yet another example of an industry that is driven by the opinions of people who don’t have any expertise in the area.

S/4HANA to be Delivered as SaaS?

Secondly, (and don’t tell Wall Street or they will be very very sad) S/4HANA is unlikely to be delivered by SaaS. In research that I am currently performing into S/4HANA to determine what has occurred on S/4HANA implementations, it turns out that very few of the implementations have been in the cloud. And in the few that I can find that are stated to be in the cloud or SaaS, they are not cloud or SaaS at all. Instead, they are non-multi-tenant or simply hosted solutions. Customers can expect none of the traditional benefits of SaaS from S/4HANA when delivered this way.

Finally, S/4HANA has nothing to do with the cloud or SaaS.

“And therein lies a huge opportunity for those existing SAP customers, who have typically seen their investments in SAP license increase year-on-year over quite significant periods of time. This is an opportunity to reverse that trend and focus in driving deals with hungry SAP account managers on the licenses and technologies you really need, not the ones you’ve been force-fed over recent years. To understand the scale and opportunity of this shift, we must first look to the past.”

It is very difficult to argue that anyone “needs” S/4HANA at this point. S4HANA comes with all types of implementation costs and maintenance costs. These costs are far higher than any potential license cost benefit from moving to S/4HANA. In fact, the majority of costs associated with SAP come in maintaining SAP systems, not purchasing SAP systems. I cover this topic in detail in my book on TCO, Enterprise Software TCO: Calculating and Using Total Cost of Ownership for Decision Making.

“The fundamental change is that the open architecture of R/3, with the ability to employ third-party databases within the system, is giving way to a more specific database that you’ll require as part of the platform – SAP’s HANA. This is all being done with the promise of improved performance and scalability through in-memory databases.”

Well, the promise of the performance improvement is not analyzed by Snow Software’s article. But as HANA is an analytics database primarily, there is no evidence that an ERP system will run much faster on HANA due to software. Here it is important to draw a distinction between the software side and the hardware side of HANA.

HANA combines a changed database with SSD memory (instead of a spinning disk) so the performance will automatically increase because of the hardware change (SSD), but not necessarily due to the software.

“The faster it migrates everyone, the quicker it can stop focusing its investment in resourcing and maintaining R/3. So, in a perfect world, SAP would spend nothing on R/2 today and, 10 years from now, it won’t spend any money on R/3.

Moreover, S/4HANA revenue is heavily scrutinized by investors in SAP. The faster they see adoption of this new platform, the quicker that is reflected in the share price for SAP. SAP as a stock needs a growth leg to the story despite its strong position and cash flow.

The transition to S/4HANA requires the replacement of third-party database systems with HANA and there is a monetary uplift from doing this.”

Ok, so this is a strange way of saying that the cost will be higher. The cost of HANA is quite high, and the expensive software is just the beginning. The following quotation will focus on support costs, but the support costs are based upon the license cost. Let us continue with the quotation to see how this is a problem.

“SAP Enterprise support customers currently pay (by default) 22% of license costs in annual maintenance for the use of third-party databases within the architecture of their systems. SAP has steadily over the past few years increased this amount from the 15% level in advance of its migration mandate. In lieu of paying an annual 22% of license costs for your database (typically Oracle), you will pay 15% of license costs for HANA*. Additionally, as an incentive to move to S/4HANA, SAP’s extension policies may enable you to apply unused SAP licenses against a credit for the new purchase. A reduction in the software application value means reduction in overall maintenance to be paid on HANA. *Note that individual circumstances may vary.”

The problem is that Snow Software is making a case for the lower cost of the annual license cost for HANA. However, HANA is the most expensive database on the market. So if you decline from 22% to 15% maintenance, the maintenance is lower, but the base is much higher than the database that HANA replaces.

Secondly, HANA comes with other liabilities, such as indirect access liability, that impact the costs of other software, which are a whole other can of worms and which I have covered in part in other articles.

Understanding the Logic of Trading in Unused Licenses for S/4HANA

SAP often offers customers the ability to trade unused licenses for a credit towards a HANA or S/4HANA purchase. The sales rep’s motivation is clear, as they are incentivized by SAP to push both of these products. And, some entities that provide SAP licensing advice advise their clients to do just this.

So, what can be seen as left out is that S/4HANA has not been a success, and it has had plenty of time to become one. It has a massive installed base (with ECC/Business All in One) on which to sell, and our research into S/4HANA demonstrates that S/4HANA, even in 2019, has little uptake. The details are covered in our study, The S/4HANA Implementation Buyer Intelligence Highlights.

I find the strategy presented by Snow Software to be problematic. Here is a synopsis.

Therefore, applying the strategy above will simply result in having the license for S/4HANA that cannot be taken live for some time. Snow Software is not taking into account that S/4 HANA will most likely sit unused or in a partial demo state for this time. This would not be a problem as S/4HANA will normally be purchased at a discounted rate. Not HANA, which is required to run S/4HANA will not be purchased at a discount.

Therefore every year maintenance will be required to be paid on a very expensive database, albeit it at a reduced rate. And that is just one of the limitations of the strategy.

[Use S/4HANA to get rid of your SAP shelf ware | Snow Software](https://www.snowsoftware.com/int/blog/2016/09/20/use-s4hana-get-rid-sap-shelfware-pt-1#.WBzBfY_XJ-Y)
You cannot copy content of this page