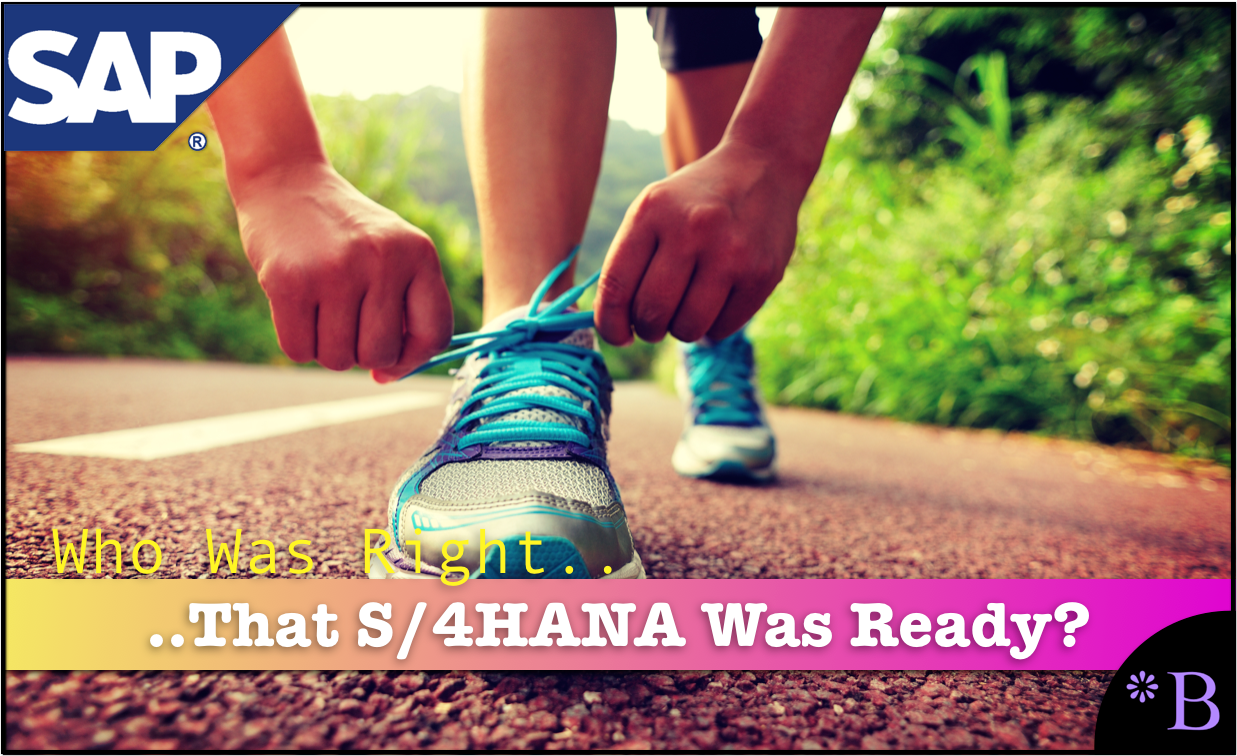 Video Introduction: Who Was Right About S/4HANA’s Readiness?

This article was published on Feb 8th, 2019. S/4HANA just had its 4th birthday as it was introduced on Feb 3rd, 2015. S/4HANA has been a highly promoted application with many entities making projections about it. Four years is quite a while for an application to build up a history. In this article, we will cover who got it right and who got it wrong. Testing S/4HANA showed an immature application, yet many companies either did not check this themselves or had a financial incentive not to publish on S/4HANA’s immaturity. You will learn how was right and wrong about S/4HANA.

SAP has been playing a game for four years, where they have exaggerated the implementation success of S/4HANA. The following is a common set of statements made about S/4HANA by SAP. This is from the Q2 2018 analyst call.

“Driven by fast adoption of SAP S/4HANA, cloud and software revenue grew by a stellar 10%.

And, remember that new high-growth cloud solutions like S/4HANA Cloud and C/4HANA will have more impact on growth as they scale to be a bigger part of the mix.

And then, maybe, coming back to S/4HANA, obviously, very successful ramp-up with customers.

We have close to 2,000 live customers on S/4HANA by now already (Q2 2018), and we have another close to 3,000 ongoing implementation projects, which means that given the implementation timeframe for S/4HANA is greatly reduced versus traditional ECC implementations of the past decade, we will soon have 5,000 reference customers to speak for us.”

Large Numbers of S/4HANA Reference Customers on Wall Street Calls, But Only Three for Forrester

Interestingly, when it came to having Forrester perform an SAP funded study to evaluate S/4HANA implementations, SAP provided Forrester with a total of three customers to talk to. Of 2000 customers, SAP, which is aware of every single one of the 2000 “live” customers, could come up with three names. And of those three, all three had tiny implementation timelines and costs.

When SAP is talking to Wall Street, Forrester gets three clients when it comes to providing clients. Let us do some math. 3/2000 = .0015. We covered Forrester’s “study” in the article How to Understand Forrester’s Fake S/4HANA TCO Study.

What is the Risk Level of S/4HANA When Implemented?

Since S/4HANA was first introduced, we rated it as the highest risk of applications. This was primarily due to the application’s immaturity, which we determined through first-hand testing of the application. S/4HANA, in our view, was released several years too early, which we covered in the article How Accurate Was SAP on S/4HANA Being Complete?

Our estimate was recently supported by UpperEdge, who stated the following about S/4HANA projects.

“While 32% of S/4 clients have a go-live date, our research shows project failure rates go as high as 70%.”

We have never performed an estimate, but we do know that S/4HANA failures are quite common.

S/4HANA has had several high profile failures or postponements, which include the following:

Uncovered in the IT media is the fact that there have been countless postponements of S/4HANA projects. Very few of the 2100 estimated customers that SAP states live are actually live, which we covered in the article A Study into S/4HANA Implementations.

How did we figure this out?

Well, the first clue was the immaturity of S/4HANA when we tested it. Then we started getting complaints from companies implementing S/4HANA about that exact thing. Finally, we evaluated every S/4HANA case study (both public and private) and analyzed each. When we did this, we found that most made no sense.

SAP marketing had released information that they did not realize allowed us to figure out that many of the go-lives were fake, exaggerated, not really live, etc.. This is true even though S/4HANA has appeared like wildfire on resumes and is currently one of the most falsified skills in the SAP space, along with its cousin HANA.

Who Was Right About S/4HANA?

Who Was Wrong About S/4HANA?

This is a long list, indeed. However, the primary culprits are the following:

The past four years have been a torrent of false information about S/4HANA from all the major information providing IT entities. Two entities got it right, and they were the two that are not partners with SAP and are not paid by SAP. That is no coincidence.