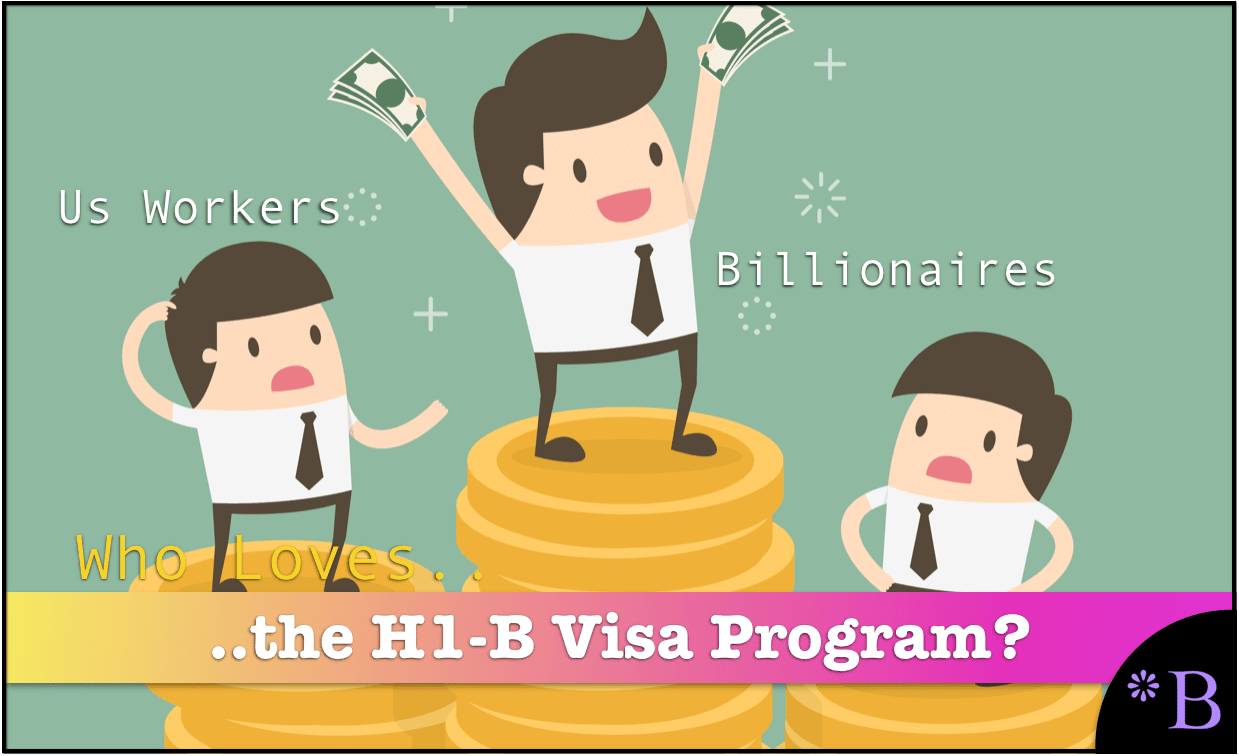 Billionaires seem to be virtually unified in their support for programs that allow their companies to access lower-cost labor. In most cases, their proposals about the benefits of foreign worker programs are cloaked in ideas around what is good for the country or “competitiveness.”

What do we know about things that billionaires are for…it typically means it is bad for workers, as billionaires often become billionaires by cheating regulations or engaging in labor exploitations.

Billionaires tend to support the following:

Billionaires like Jack Welsh have proposed placing factories on barges — so they can be moved around to whenever the government becomes difficult or whenever costs rise or for a multitude of other reasons, as is explained by the following quotation.

Founded by the American icon Thomas Edison, GE is now headed by Jack Welch, who has said, “Ideally you’d have every plant you own on a barge” — ready to move if any national government tried to impose restraints on the factories’ operations, or if workers demanded better wages and working conditions.

GE has globalized its operations by shifting production to low-wage countries. (And even in these countries, the jobs remain precarious: GE recently shuttered a factory in Turkey to move it to lower-wage Hungary — and it has threatened to close a factory in Hungary and move it to India. Union officials in Malaysia say they fear GE “putting our plant on a barge and moving to Vietnam,” according to InterPress Service.)

Now GE appears no longer satisfied to close its own plants — it wants to shut down those of suppliers, too. In a startling memo obtained by Business Week, GE Aircraft Engines (GEAE) — a hugely profitable division — told suppliers that they would have to move to Mexico if they hoped to continue their relationship with GE. GEAE has held what it calls “supplier migration” conferences in Cincinnati, near its headquarters, and in Monterrey, where an aerospace industrial park is being built. – CommonDreams

However, media entities frequently give very positive press to billionaires and do not critically analyze what they propose. Naturally, so many media entities are either owned by billionaires or try to sell advertising or paid placements to companies of dollars in revenues. A billionaire could have the most horrible history, but they still receive the halo treatment. It is a bit like the billionaire Christian Grey in the Fifty Shades of Grey novels. His behaviour is deeply disturbed…until you find out that he is a billionaire, which then makes the behavior not only accepted by desirable (according to the readers of the books anyway).

Something we noticed is how so many prominent billionaires are unified in their support for current foreign worker programs and how they want even further expansion of these programs.

Let us review some of them.

During a speech to the US Chamber of Commerce in 2011, Bloomberg (Net Worth: $58 billion) whined: “This is just absurd to deny American companies access to the workers they need.” – Sold Out

Murdoch (Net Worth: $19 billion) declared that “immigration reform can’t wait” and demanded that Congress adopt both full amnesty for millions of illegal aleins and wholesale removal of the H1-B caps for foreign guest workers. – Sold Out

Reality based commenters of all political backgrounds mocked the trio.

“What we have here is three of the richest men in America telling us that no matter how many Americans are out of work of underemployed, it’s still critically important to make it easier for employers to go over the heads of American workers and hire workers from other countries,” one perceptive Times reader snarked.”

And “How do these privileged, insulated men believe that allowing current illegal residents to obtain citizenship is not rewarding law breaking and will somehow not lead to more? This is not ‘America’s self interest.’ This only in the interest of those seeking cheaper labor and votes.” – Sold Out

We covered in the article How Google’s Eric Schmidt Lied About Skill Shortages to Support H1-B, how Eric Schmidt admitted that Google only hires around 1 out of 1,000 applicants. Yet, Eric Schmidt, (Net Worth of $9 billion) went to Congress to support H1-B expansion and complain about the lack of skills in the US market.

Should Billionaires Be Listened to Over Others?

This video provides the case regarding the issue with billionaires impacting politics.

The Problem Will The Financial Bias of Billionaires

Billionaires value money over everything else. And their proposals help them get more of it. Curiously even when Bill Gates’ charity is tied back to his self-interests, the media still sugar coats whatever program he has as positive. Bill Gates has a well established as a ruthless and unfair competitor, the same with Mark Zuckerberg and all billionaires. The media never seems to question why people with long-established histories of being supremely selfish would suddenly turn around and become concerned about the broader society.

This following quotation from the book America on the Brink: The Next Added 100 Million Americans explains that the billionaires pushing for policies that are great for them personally, but bad for the US overall.

Mr. Rob Sanchez of Arizona showed how H1-B and L1 visas have ripped one million high tech jobs out of American workers’ hands.

Our view is that this number is greatly underestimated. We cover the underestimation of how many foreign workers are entering the US every year in the article How the H1-B Program Understates The True Number of Yearly H1-B Visas.

Another speaker told a packed audience how ‘offshoring’ and ‘outsourcing’, fully supported by the president and congress, have cost over three million American jobs in the past six years. His prediction was even more depressing: “In excess of three million more jobs will be ‘outsourced’ within four years. Those American jobs are headed to Mexico, India, China, Pakistan and Brazil.”

Aarnold Toynbee observed that all great civilizations rise and fall, and that, “An autopsy of history would show that all great nations commit suicide.”

former Colorado Governor Richard D. Lamm, stood up and gave a speech on “How to Destroy America.”

“Here is how they destroyed their countries, Lamm said. “First, turn American into a bilingual or multi lingual and bicultural country. History shows that no nation can survive the tension, conflict, and antagonism of two or more competing languages and cultures. It is a blessing for an individual to be bilingual; however, it is a curse for a society to be bilingual. The historical scholar Seymore Lipset put it this way, “The histories of bilingual and bicultural societies that do not assimilate are histories of turmoil, tension, and tragedy. Canada, Belgium, Malaysia, Lebanon — all face crises of national existence in which minorities press for autonomy, if not independence. Pakistan and Cyprus have divided. Nigeria suppressed an ethnic rebellion. France faces difficulties with Basques, Bretons, and Corsicans.”

Evaluating the Actual History of Diversity

Curiously, the US holds up diversity, without actually understanding the outcome of diversity historically. This “diversity” has caused massive social problems in just the IT-sphere in the US as the Indians that have been brought into the country now work against the interest of the domestic workers.

Lamm continued on how to destroy America, “Invent ‘multiculturalism’ and encourage immigrants to maintain their own culture. I would make it an article of belief that all cultures are equal. That there are no cultural differences! I would make it an article of faither that the Black and Hispanic dropout rates are due to prejudice and discrimination by the majority. Every other explanation is out of bounds.”

Any citizen can see that Los Angeles, California or Miami, Florida are no longer American cities. Chicago, Houston, Dallas, Chicago, New York, Atlanta, San Francisco and many other cities are not far behind. Immigrants arrive at over two million per year, so fast and so many, that they do not assimilate into the American Dream. However, they create the American Nightmare for Americans.

“Before we got here, Miami was nothing,’ yelled a militant Cuban.

Today in Miami, you will be estranged if you are an American. Point blank reality: Miami no longer represents and American city. Corruption reigns supreme along with growing “Third World Momentum.”

Lamm said, “I would next make it impossible to enforce our immigration laws. I would develop a mantra: “That because immigration has been good for America, it must ALWAYS be good. I would make every individual immigrant sympatric and ignore the cumulative impact of millions of them.””

As we cover in the article How the US Department of Labor is Useless in Policing The H1-B Program, even though broadscale H1-B fraud is commonplace, neither the Department of Labor nor the INS actively do anything to stop it. It is not only the H1-B program that is heavily parasitized with false claims but other foreign worker programs such as the L-1 and B-1 programs.

The quotation continues and gets into the impact of illegal immigration into the country.

“Fourth, I would make our fastest-growing demographic group the least educated. I would add a second underclass, unassimilated, undereducated and antagonistic to our population. I would have this second underclass have a least a 50 percent dropout rate from high school.”

That (North High School in Denver) school system suffers hundreds of illegal alien kids who can’t speak English and arrive from functionality illiterate parents. They cannot perform academically because their parents have no interest or background in viable education processes.

Billionaires and H1-B lobbyists provide false information about the skill levels of H1-B workers as we cover in the article How the Pay Level of H1-B Visa Workers Contradicts Industry High Skill Claims. Furthermore, if immigration is about skills, then why does the US allow large illegal immigration?

Billionaires Concerned about the Decline in “Democracy?”

Are billionaires concerned about the effect the absorption of so many foreign individuals with no exposure to a participatory government will have on US “democracy.” Of course not, billionaires prefer plutocracy where they get to use their money to control the political process.

However, democracy requries four disciplines to flourish while remaining viable. It requires an educated population and prossesses a similar moral and ethical foundation while speaking the same language. The United States, via massive immigration, is losing all four aspects.

It cannot and will not remain workable much longer with the disruption of its educational systems. Conflicting lanugages bring a whole new can of worms to the equation.

The Real Story With Billionaires and Immigration

While a few elites in high places make billions of dollars, they corrupt American’s rule of law and undermine the middle class.

If you’ll notice — third world countries do not sustain a middle class. They suffer a high class and a new low class. America proceeds in that direction evey day of this immigration onslaught.