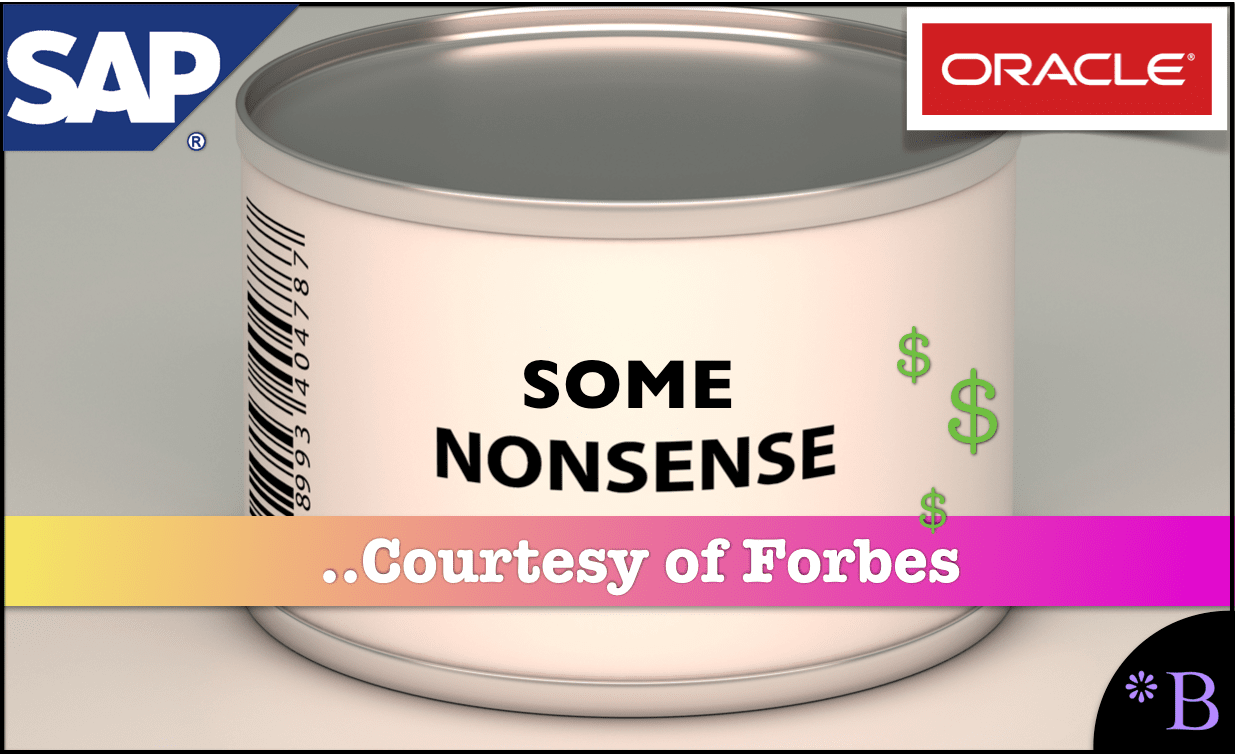 On Aug 2, 2017, Forbes published the article, Oracle’s Booming Cloud Business Could Rip and Replace SAP As #1. In this article, we will review the accuracy of this article.

I’m a huge fan of McDermott’s strategic vision and leadership style, and he’s done an outstanding job of guiding SAP’s transformation to the cloud—but still, that assertion didn’t seem to be supported by facts.

While SAP executives did say that more than 6,300 customers have purchased the S/4HANA product—which does not refer specifically to the cloud version, which is called S/4HANA Cloud—they did not offer any specifics on how many of those 6,300 are the cloud version. And for context, recall that Oracle said it added 868 new cloud ERP customers in the quarter ending May 31, with 200 more customers that had already bought Oracle’s cloud ERP adding more services.

SAP has many customers of S/4HANA that have never implemented the application. SAP has even fewer S/4HANA Cloud customers, which is why SAP has not released any specifics. The 6,300 number is highly exaggerated, covered in the article How SAP Uses Customer Numbers of Control Perceptions.

So in researching this article, I sent SAP via email a number of questions about S/4HANA Cloud and its cloud ERP business, and I specifically asked SAP if it could share any market-research or financial data to back up McDermott’s claim.

SAP initially scheduled a call for me to speak with Darren Roos, president of its S/4HANA Cloud business, but later canceled that call and subsequently sent answers to my questions from Roos via email.

Interestingly, Darren Roos is not interested in speaking to someone writing for Forbes when the question of support for statements is the subject. Forbes has been very friendly to SAP on S/4HANA in the past.

Here’s the email answer from Roos to my question about specific data to back up the claim that S/4HANA Cloud “is the #1 and fastest-growing cloud ERP solution in the market—hard stop”:

“As Bill and Luka [CFO Luka Mucic] said on the earnings call, we are in the early days of the SAP S/4HANA adoption curve and we are confident in our growth trajectory. In the first half of the year we grew over 400% YoY and see massive growth in our pipeline to support this continuing in the short to medium term. Our ability to simplify the journey to the Cloud for our existing customers by leveraging our S/4 code line and data model, along with new innovations through a quick-to-deploy intelligent ERP is a formula which resonates well.”

All in all, a nice summary of what SAP hopes to achieve in this strategically vital market—but it dodges the question and blurs the line between the on-premise version of S/4HANA, which has been out for more than 2 years, and the cloud version, which was introduced about six months ago in February 2017.

None of this is what Forbes asked for. The answer provided by SAP is an attempt at a pivot.

It’s impossible for the 6-month-old cloud version of S/4HANA—which is the product that Bill McDermott specifically referenced in his remark and which my question specifically addressed—to have grown “over 400% YoY” because it didn’t exist a year ago. So that growth rate must apply to the on-premise version, not the cloud version.

Yes, but the quote is obviously deliberately non-specific. And it can’t apply to the on-premises version. In the 2017 Q2 call, SAP reported 6300 S/4HANA customers. SAP has been reporting roughly 400 new S/4HANA customers per quarter while implementing almost none of them. No matter what, the cloud customers are included in those numbers. So if we go back a year, that would be 4 * 400 customers per quarter (so 1600). SAP can’t have 400% year-over-year growth on S/4HANA.

The synopsis? Bill McDermott has zero evidence for what he stated regarding S/4HANA’s growth.

We do know SAP’s Roos is extremely bullish on his cloud ERP prospects: “We provide a high level of flexibility and extensibility via the SAP Cloud Platform and none of our competitors are offering the same level of integration between cloud apps,” Roos said in his email reply to my questions. “In May, we released significant enhancements for large enterprises including discrete manufacturers, and we’ll continue our rapid quarterly innovation cycles with our August release, which will, among other things, bring Treasury & Risk Management, Contract and Lease Management.”

Darren Roos is extremely bullish because he is paid to be.

As for the last parts of the quotation, these are all future statements.

In his concluding email remark, Roos said, ” We see Oracle and we compete with them. And as more of our customers go live and put our Cloud ERP at their core, I’m confident this will be a true runaway story for SAP.”

I always wonder about quotes that state the obvious. Yes, SAP is aware of Oracle and competes with them. Thank you for that, Darren Roos.

After winning the boobie prize for the most obvious statement of the year, Darren returns to future statements again.

Allow me to predict the opposite, as a person not drawing millions of dollars per quarter in SAP stock options. Because all of the evidence thus far has been that SAP will not be successful with cloud ERP.

This article is not appropriately titled. First, SAP is not #1 in the cloud, so Oracle can’t replace SAP as #1 if SAP never was #1 at something.

Overall the article does a good job of questioning statements by McDermott. And of course, when questions, SAP can’t defend them.