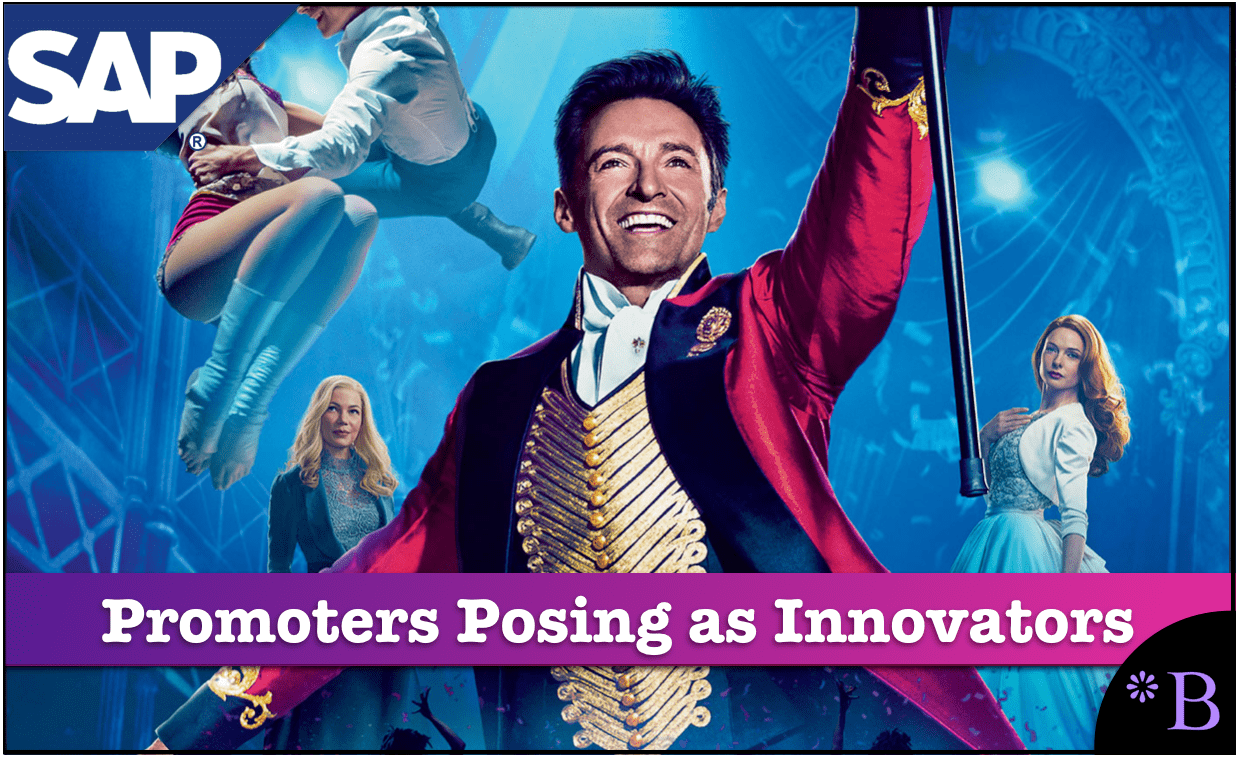 In a previous article, I questioned whether Hasso Plattner behaved as a Ph.D. The reason being that he is so often divorced from reality. He also does not communicate in a style that is consistent with other Ph.D.’s I know, and I proposed that people who have Ph.D.’s who don’t care what is true, should be required to give those Ph.D.’s back. Since that time, someone reached out to me to explain that he did not think Hasso had a real Ph.D.

Since I began working in SAP, it had always been generally accepted that Hasso Plattner was  Ph.D. In reference after reference, Hasso is repeatedly referred to as “Dr. Hasso Plattner.” I was once told to add “Dr.” to Hasso Plattner’s name because if Hasso Plattner had attained a Ph.D., then it was required that I add that to every possible reference. That is not true, but this demonstrates the degree to which the idea that Hasso must have a Ph.D.

However, when I went to go and look for Hasso’s Ph.D. I could find no mention of it outside of this quote from Wikipedia.

“Since his retirement from SAP, Plattner has been particularly active as a benefactor in the field of technological research. Media reports have named him one of Germany’s most important private sponsors of scientific research. Plattner received his honorary doctorate in 2002 and his honorary professorship in 2004 from the University of Potsdam. Plattner had also received an honorary doctorate (1990) and an honorary professorship in Information Systems (1994) from the Saarland University, Saarbrücken. The same university named him an honorary senator in 1998.[12]” 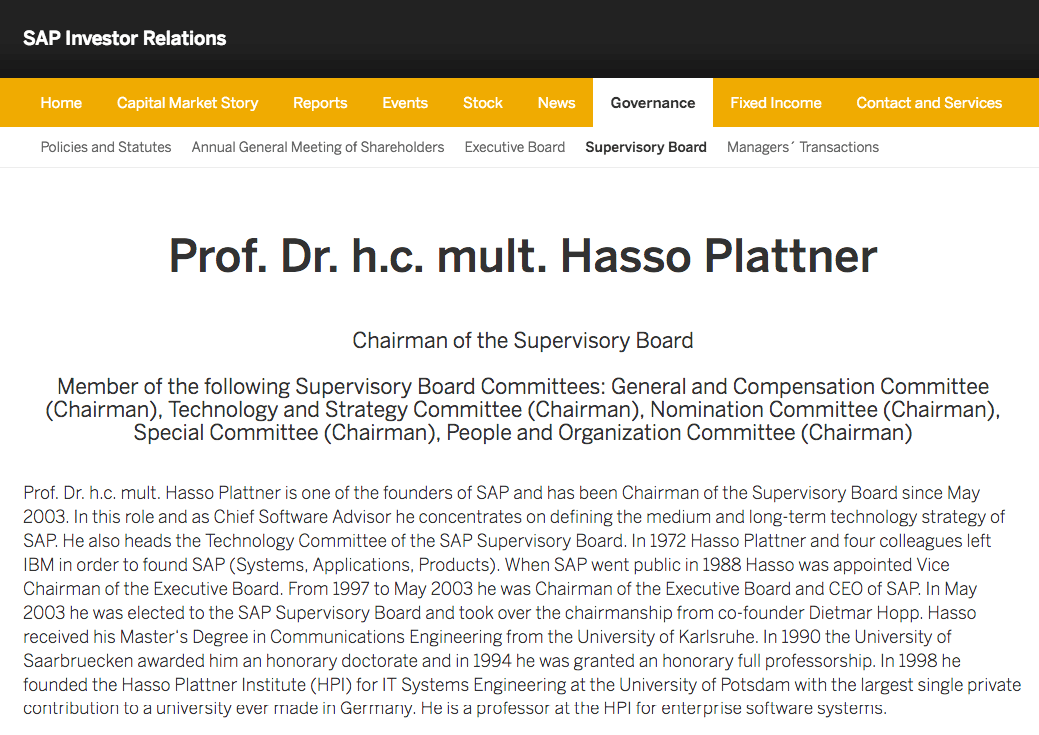 Interestingly, I don’t recall anyone observing that Hasso did not have a P.h.D. I was once writing a paper for a company, and I wrote “Hasso Plattner” and was told that I needed to change it to “Dr. Hasso Plattner” because “if he earned the degree, then you have to state it.” But how about if the degree is “honorary.”

Well then obviously not.

How Honorary P.h.D’s Work and Who Gets Them

Now lets us discuss the honorary Ph.D. for a moment. Honorary P.h.Ds are given out like candy often for providing a commencement speech. The work involved in getting one is nothing, and they are usually given out to high-profile individuals. There is also an ethic required with honorary Ph.Ds. That is, you are not supposed to pretend it is a real Ph.D. They are a joke, Ph.D. Again, honorary Ph.Ds are given to entice celebrities to provide a commencement ceremony speech. A real P.h.D can take four years to attain and only about 1 out of 140 people (in the US at least) to achieve an undergraduate degree ever attain a Ph.D.

Moreover, this story gets better. This is because Hasso did not stop pretending to have a P.h.D. He also decided to start an institute at the university close to his residence, the University of Potsdam.

However, how can a person who has never completed a Ph.D. program start up a pseudo-mini-university? It’s all a bit ridiculous.

This is explained in the following quotation from Wikipedia.

“Also in 1998, Plattner founded the Hasso Plattner Institute[3] for software systems engineering based at the University of Potsdam, and in Palo Alto, California, its sole source of funding being the non-profit Hasso Plattner Foundation for Software Systems Engineering. Plattner has pledged €50 million of his personal fortune over a period of 20 years. Since its foundation, Plattner’s commitment to the HPI has quadrupled to over €200 million. He not only fully finances the HPI, but is also actively involved as a director and lecturer in Enterprise Platforms and Integration Concepts.[13]”

The Hasso Plattner Institute is the location of yet another made up story by both Hasso and SAP. This is where they created a deliberately false backstory to make it appear that Hasso and his Ph.D. candidates created a “whole new database,” which I previously covered in Did Hasso Plattner and His Ph.D. Students Invent HANA?

With HANA Hasso showed how lacking in studiousness he was, as one of the major problems with HANA has been that it was designed in great part by Hasso Plattner, and he did not know what he was doing. This constant overestimation of knowledge is consistent with a person who fakes academic credentials.

Later, Hasso donated money to Stanford, and they created the Hasso Plattner Institute of Design. SAP has used this to promote Fiori, repeatedly leveraging the Stanford name. Yet after the institute being established, and all the discussion around Design Thinking (which I covered in the article Does Design Thinking Improve SAP’s Implementation Speed?), the output of Fiori is underwhelming. Once again, having a lot of cash does not translate into knowledge or ability.

Hasso and SAP used his honorary degrees to communicate false authority for over a decade and a half. As a result, almost no one knows Hasso is not a Ph.D.

When My Suspicious About Hasso Were First Triggered 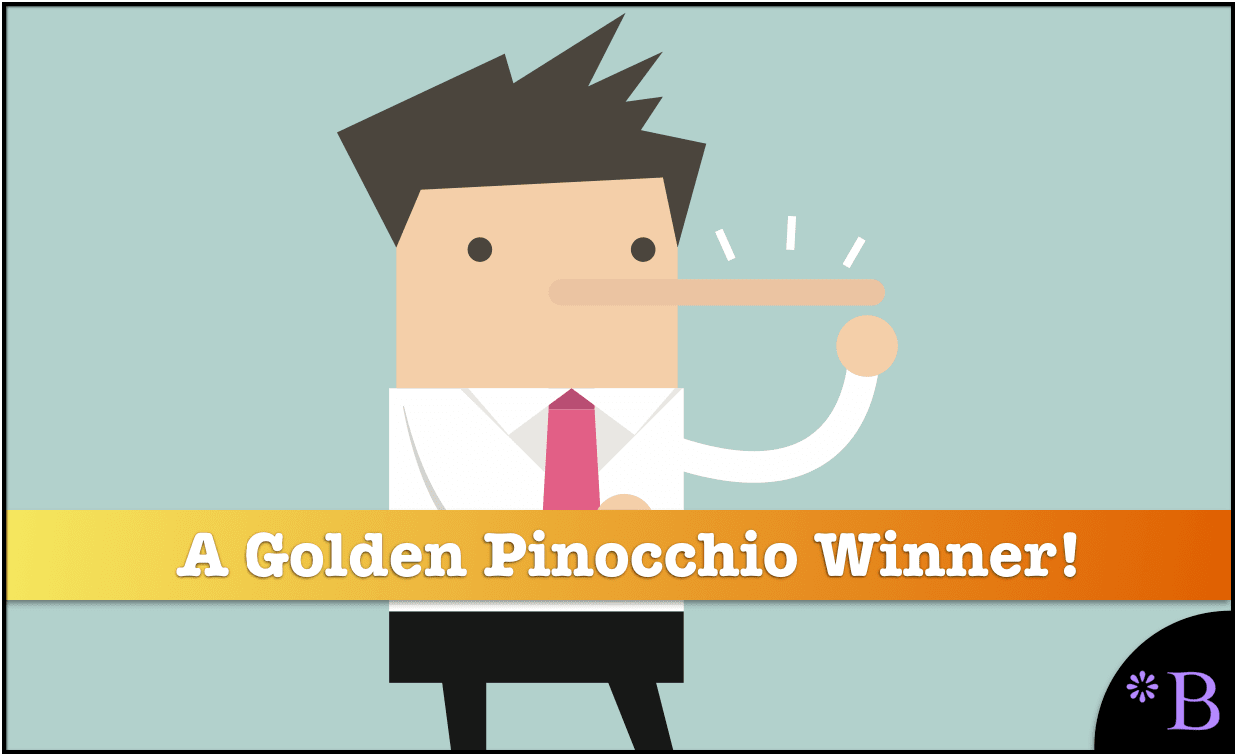 We award Hasso Plattner the Golden Pinocchio Award for claiming to have a real Ph.D. when in fact, he only holds honorary Ph.D.s.

This honorary Ph.D. issue is another case of both Hasso and SAP using deception to trick customers into thinking that there is some excellent mind behind SAP. It shows how little Hasso and SAP care about what is true. And the trick worked. It worked on me. I never thought to look up Hasso Plattner’s educational credentials.