Advisory companies sell out the interests of their clients for their own company benefits. For this reason, it is virtually impossible for companies and governments looking for advice to find an advisory company that does not follow this model.

Software Selection and the IT Consulting Model

Companies often rely on consulting firms for software selection. However, these firms only care about staffing consultants on projects. The software selection phase and income are quite small compared to the implementation business. So once the consulting firm has the selection contract, they provide advice and nearly always recommend software that is not a good match for the account but allows them to maximize the number of H1-B billing hours and margin. One way of doing this is to rig the RFP process to win only their preferred vendor (with whom they already have a partnership).

When you talk to senior members of consulting firms, you quickly recognize not only do they not care about technology; they don’t care about their accounts. Behind closed doors, the entire discussion is billing hours and margin and sales. The first tip is if Deloitte or Infosys etc.. say something, then that thing is wrong and has a financial reason for being said. These companies know the answer before looking at the requirements. 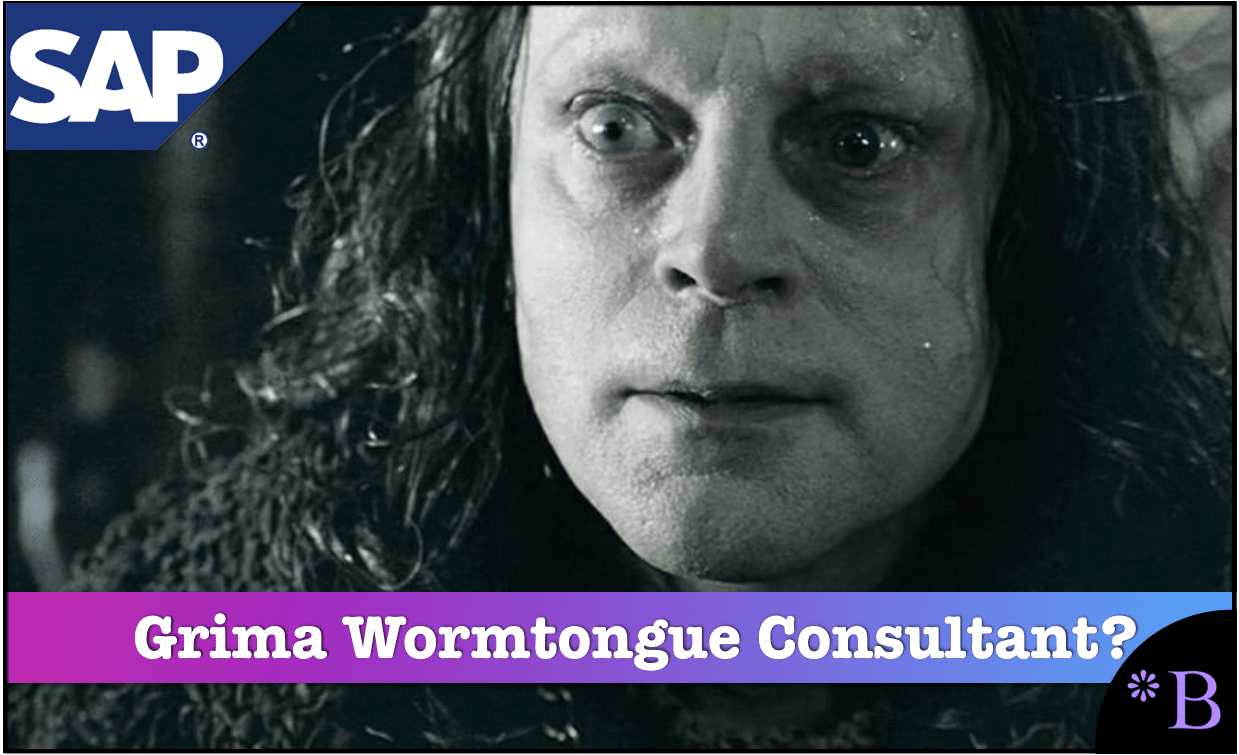 Is there someone who looks like this hanging around the IT department? No? How about Deloitte, Accenture, IBM, CapGemini, Infosys, Wipro, TATA, KPMG, Cognizant, or PwC? Because, in essence, all of these firms are Grima Wormtongue.

There certainly needs to be more discussion on how consulting firms advise their clients that they know will lead to major issues. During the sales process, the only objective is to “get the business” rather than recommend good things for the client.

The SAP consultants that defend these practices on LinkedIn try to come up with every excuse in the book why it is a good thing to do this. In the case of Revlon, as is covered in the article, What Was the Real Story with the Revlon S/4HANA Failure? They were recommended S/4HANA when S/4HANA was so immature the possibility of going live was 0%. The project is known to fail before it began.

This is why so many IT departments need Gandalf and to erase these Grimas.

How the Model of Advisement Generalizes

McKinsey and Blackrock as Providers of Continuously False Forecasts

McKinsey has been caught constantly providing inaccurate forecasts used to provide support for privatizing government projects to McKinsey cronies. Blackrock functions similarly. This is how Blackrock grew in the space of 30 years from a new company to have $7 trillion in assets under management.

This describes the constant conflicts of interest that are part of how Blackrock does business and explains their enormous financial success.

Goldman Sachs Bets Against Derivatives That It Created

In the run-up to 2008, Goldman Sachs created financial derivatives, assigned salespeople to extol their virtues, and then sold them, bet against them. How could they be so sure?

Because they designed them to blow up when caught, they stated it was their First Amendment right to defraud their buyers essentially. These mortgage-backed securities were sold to unsuspecting pension funds and governments all around the world. This caused enormous financial problems for countries like Iceland that was not only lied to by investment banks, but by AIG (that insured the bad derivatives without having any reserves) and by rating agencies like Moody’s and Standard and Poor’s that give the rating on a derivative that the investment banks wants.

Advisory Outcomes Can Only Be Understood by Appreciating This Corrupt Model

Not only is this how the system works, but it is also impossible to understand the investment and IT and a host of other decisions without understanding that virtually all companies with an advisory function work this way. I have been recently researching government infrastructure funding — and McKinsey is a leading firm in providing falsified studies that promote privatization schemes where the private banking interests and construction firms are given a monopoly in return for completing projects. KPMG provided a report on corruption in South Africa that targeted their political enemies in the country and had to be withdrawn as this was exposed. This is something we covered in the article How KPMG Falsified Their Report on Corruption.

One should think for a minute about what type of company would do this? I worked for KPMG, and this was exactly what we did when I was a junior consultant. I was shocked to be told to rig the data to make a case for whatever the partner wanted to sell. A big part of my career trajectory at KPMG was dependent upon how well I “came to understand” how consulting works. Sufficit to say, I did not last at KPMG for very long. I made it a year and a half. There is no way I could have survived at KPMG and had a career there without engaging in the falsification of data. The eventual idea I was sold is that I would someday be able to lead a team of data falsifiers and rise from just being the “data jockey.”

The question one has to ask is — who is able to get it through the process to rise to the rank of a partner at these firms?

So imagine my surprise on reading what KPMG did in South Africa.

What Do You Get When You Purchase a Report on Corruption from KPMG?

So KPMG’s view is that if a government hires them to write a report on corruption, they will implicate non-corrupt entities that stand up to the corruption of KPMG and their cronies. When exposed, they will “withdraw” the report.

What about the reports by these firms that are not quickly exposed?

Consulting firms are producers and promoters of a significant amount of the total false and rigged information in the world.

Consulting firms pose as entities providing deep expertise, but the consulting firm knows the conclusion without doing any work because it simply works backward from their financial incentives. The work is in justifying the result that is already the most profit-maximizing to the advisory firm. Under many capitalist ideas, the consulting and advisory firm is literally compelled to provide false information to engage in profit maximization, which is currently considered the ultimate business virtue.

This article began with an analysis of software selection by an IT consulting firm. However, this is just one instance of what is a pervasive feature in consulting and advisory. Any consulting or advisory area you can name (IT, business strategy, government infrastructure decisions, investment banking, etc..), there are a group of corrupt consulting companies sitting there willing to say anything and ready to feast on their clients by furnishing them with unscientific and entirely self-compensating advice.

The Implications of the Advisory Model

This advice is costly to both individuals companies and the broader society. A significant issue with pointing this out is who has freedom of speech. It turns out that very few people have freedom of speech. People need to continue to get employment. So it’s best to keep quiet. Furthermore, as soon as a person is employed by one of these corrupt firms, they normally are willing to look the other way.

There appears to be nothing that can seem to stop this. The companies and governments only go to these corrupt firms for advice. So they will not consider an entity that does not have enormous financial conflicts and which has long histories of lying to companies and governments in the past. As there are no other sources considered, there is no way to break their lock on the advice given to governments and companies.