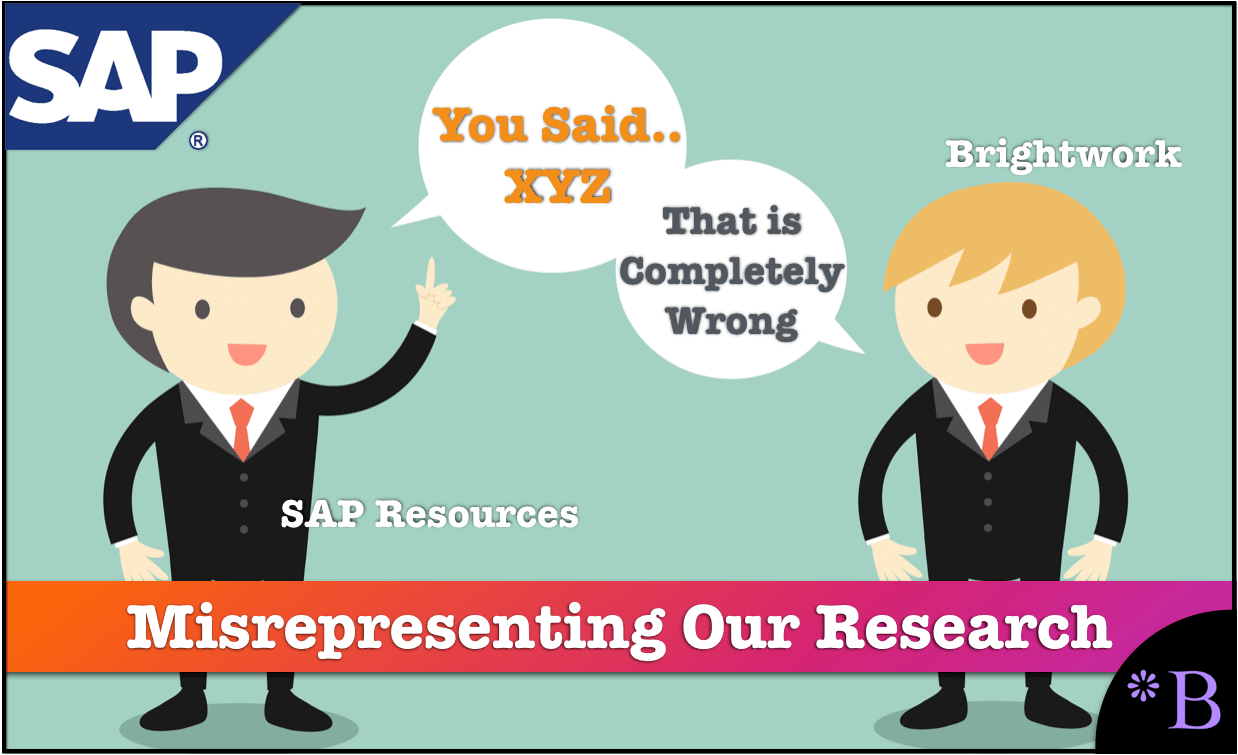 SAP resources often do not like our research conclusions. They will often try to defend the SAP marketing statements no matter how false. This article covers how one SAP resource named Paul Hardy entirely misstated what Brightwork’s statements have been.

Paul Hardy on Not Everything on the Internet Being True

If the articles that Shaun writes were true then everyone who works with SAP should be very worried. However, not everything on the internet is true, as we know. – Paul Hardy

Paul Hardy on Brightwork Reading Like a Conspiracy Theory

As it is, the articles read rather like a conspiracy theory i.e. “I am the only one in the world telling the truth, every single other person on the planet are conspiring together to hide the truth”.

He has been predicting things for many years that keep not happening e.g. SAP ditching HANA, which is rather like the people who keep predicting the end of the world and when it doesn’t happen on the target day, they set a new date.

Some of the accusations are contradictory – for example he both accuses Hasso Plattrner of designing a rubbish database and at the same time claims Hasso did not design it all, but acquired it from a mysterious un-named company.

As per the criticism that my writing is like a conspiracy theory and that I am the “only person telling the truth and every other person on the planet is conspiring together.”

SAP Has an Ecosystem or a Conspiracy?

SAP has an ecosystem, and that system does conspire together. It is called a series of partnerships. And SAP does pay media entities like Forbes and TechTarget to publish SAP-friendly articles. We covered SAP’s funding and control over media entities in the article How to Best Understand Control of the SAP on IT Media. We included the control over vendors and consulting firms by SAP partnership agreements and describe the exact clauses in these partnership agreements in the article How to Best Understand the Pitfalls of Vendor Partnership with SAP. When SAP came up with one of the most foolish marketing campaigns — call Run Simple, every single consulting firm at SAPPHIRE had some variation of “Run Simple” marketing at their booth. Was this a conspiracy, or just the ordinary coordination between SAP and their partner community? Is it a conspiracy to state that SAP is in contact with their consulting firms and coordinate sales together? Does this qualify as requiring the wearing of a tinfoil hat, or is it a well-known reality?

The Limits of What Paul Hardy is Willing to Discuss

If Paul Hardy would like to provide evidence that this is not true, he should do so. However, we bet that Paul will not delve into this topic in much depth. He won’t describe how Deloitte and IBM, and others lie along with SAP or how SAP consultants function as parrots. What is the Difference Between an SAP Consulting Company and a Parrot on HANA? This is because Paul is himself part of this ecosystem. He will present no evidence that any of this is accurate and instead uses the term “conspiracy theory” to keep from presenting evidence.

Secondly, look at this article Paul wrote, which can be seen at this link Reason Not to Move to S/4HANA.

Paul had to include humor because Paul fears what would happen if he wrote an entirely honest piece without it to make the “pill go down easier.” Paul comes close to calling out SAP as lying but then declines to do so on repeated points. This is the person who should be calling out other people who provide the full story for pointing out that they do provide the whole story. Readers won’t find the type of tap dancing around criticism of SAP that Paul Hardy will perform.

Now let us get into the meat of Paul’s claims.

Paul Hardy on Brightwork’s Analysis of HANA Being Contradictory

Some of the accusations are contradictory – for example he both accuses Hasso Plattner of designing a rubbish database and at the same time claims Hasso did not design it all, but acquired it from a mysterious un-named company.

HANA is a rubbish database, but Paul cannot find anywhere I claimed Hasso Plattner did not set its early design parameters. And he certainly did use not only TREK and P*time, but when I wrote that it was before the Teradata lawsuit, and Teradata has since accused them of stealing their IP. I have since come around to thinking they, in part, did do this. And SAP has also been further backward engineering Oracle, as I covered in the article Did SAP Reinvent the Wheel with HANA?

However, all of these things are not contradictory. In an ABAP-er, Paul means the idea that multiple inputs go into something should not be lost on Paul. This is a contradiction made up in Paul’s mind, and it is entirely an inaccurate depiction of my research conclusion. If Paul did not spend a sufficient amount of time reading my material, I could see how Paul might make this error — but his later accusations are more inaccurate.

Paul’s claim that I stated that a HANA database runs just the same speed or slower than a traditional disk-based one — we can guarantee that Paul can’t find anywhere that I wrote this.

The performance issue has to do with the column design of HANA being lower in performance for things like TP and batch jobs like MRP — which is covered in this article why HANA is a Mismatch for S/4HANA and ERP.

In addition some of the “facts” can be checked against reality e.g. the claim that an in-memory HANA database runs just the same speed or slower than a traditional disk based one. There are many organisations out there that have moved to a HANA database and they have all seen improvements, albeit not the over-stated claims made by SAP marketing, but improvements nonetheless. In regard to pushing code down to the database, once again, it is possible to verify this by doing an experiment where you write two versions of a query, one with code pushdown, and one without, and see which runs faster. Then it becomes a straight yes/no rather than a matter of guesswork and speculation.

Some companies have seen improvements by moving to HANA entirely leave out the effect of the larger hardware. Again, as a technical person, it should not be lost on Paul that the same two things are not being compared if the hardware is far larger. I covered this in the article How Much of Performance is HANA? And Paul understates how much the performance has lagged the over the top marketing.

Furthermore, some companies have installed HANA and seen either no improvement or a performance decline — if the application is not 100% analytics. In every case, the price of the instance (from pre to post HANA) increases.

On the topic of pushing code down to the database running faster, and the idea that I oppose this conclusion — again, I never said this and would never say this. It is well known that stored procedures increase performance. But this has negatives, which include both vendor lock-in and technical debt. Paul asserts that I don’t know something I do know and that I am saying things I never said.

On Brightwork Being Inaccurate in SAP Predictions

That says nothing about “ditching” HANA.

SAP has reduced its emphasis on SAP. First, it switched to Leonardo, and now the focus is Experience Management. They have not yet reversed the course on S/4HANA locked to HANA. However, overall, my predictions on HANA have been quite accurate. More accurate than Gartner, Deloitte, Forrester, etc. I include John Appleby’s accuracy on HANA by comparing how John Appleby Was So Wrong About His HANA Predictions. 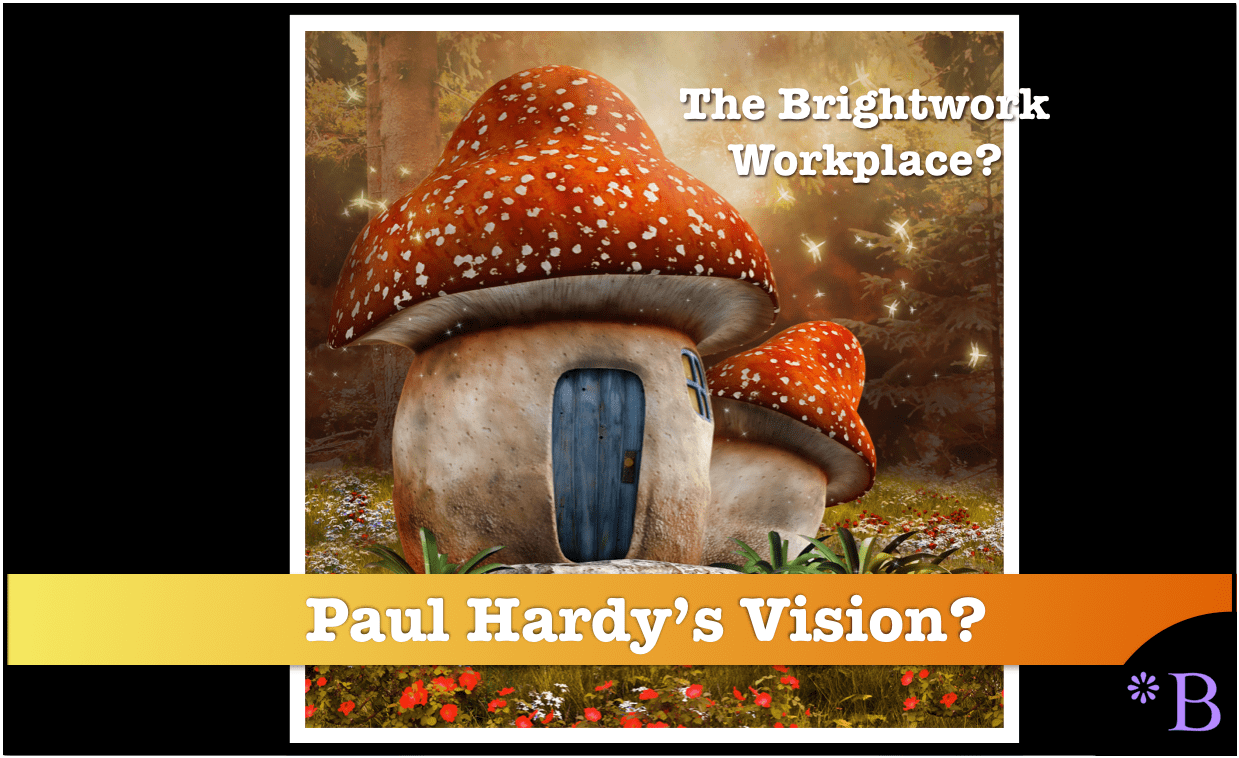 Paul Hardy seems to like making up his own reality. We tried to project what Paul probably thinks our workplace looks like, and we came up with this.

Paul thinks we work out of a giant mushroom. This estimate is about as accurate as anything else Paul has said About Brightwork Research & Analysis or my work.

From Paul Hardy’s descriptions, I don’t recognize my research. And it seems like Paul lacks familiarity with the material produced by Brightwork. Paul has created his alternate universe where he states things that Brightwork never published — apparently so these imaginary items can be more effectively critiqued.

Paul Hardy’s statements are so inaccurate that he is either lying or has problems with reading comprehension.

Paul Hardy receives a 0 out of 10 for accuracy in his comments about Brightwork’s positions and conclusions.