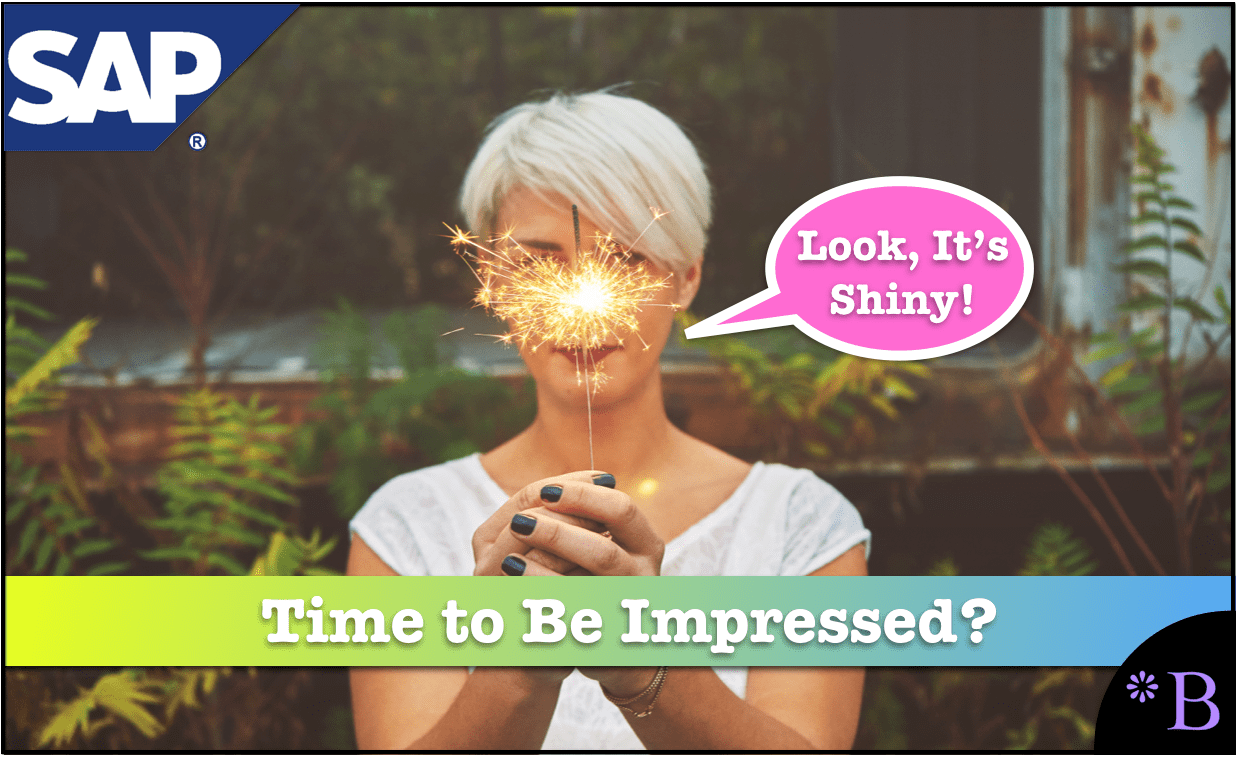 In reviewing Bill McDermott’s speech at SAPPHIRE 2019, we noticed something curious about the set design.

SAPPHIRE has always been a very “Vegas” style conference, much more focused on sales than communicating accurate information. However, this year’s central presentation area of the meeting has taken it up several notches. 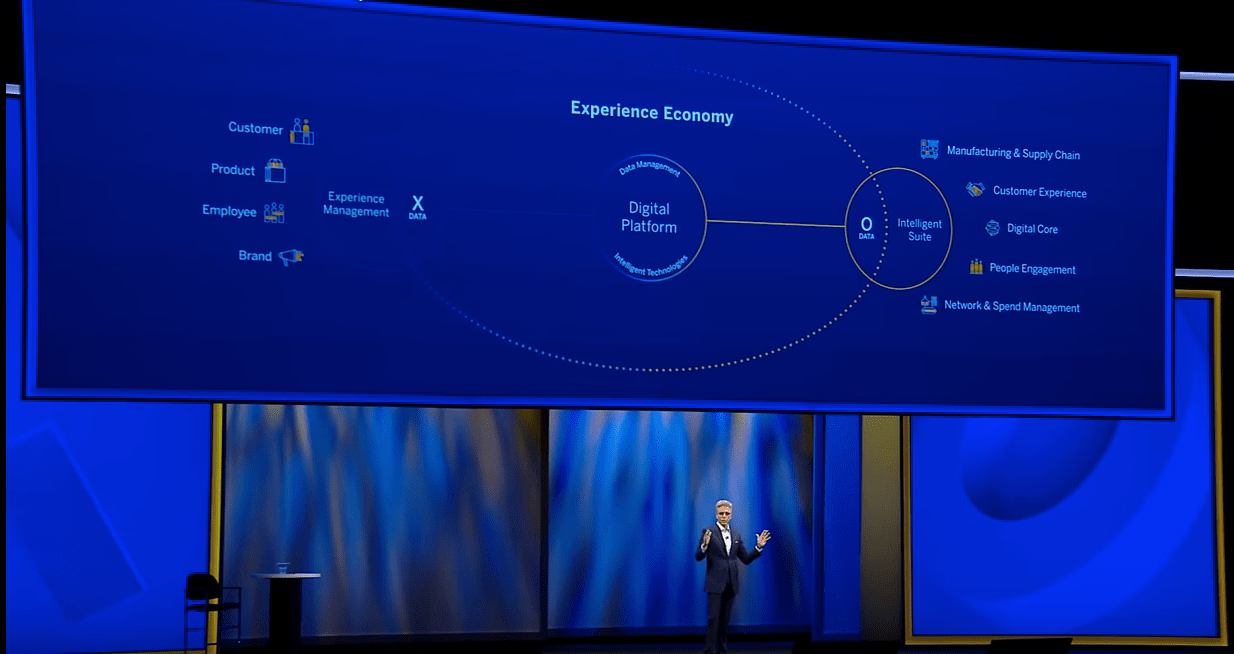 This “Jumbotron” at SAPPHIRE this year seems a bit out of hand. It completely dwarfs the speaker.

The Point of Creating Awe

The Reason for this Jumbotron

This Jumbotron appears to have been introduced to overwhelm the audience. At SAPPHIRE, the presentations are tedious and mostly filled with inaccurate information, but the displays are massive.

One display or background that immediately came to mind when seeing this SAPPHIRE Jumbotron was the following backdrop. 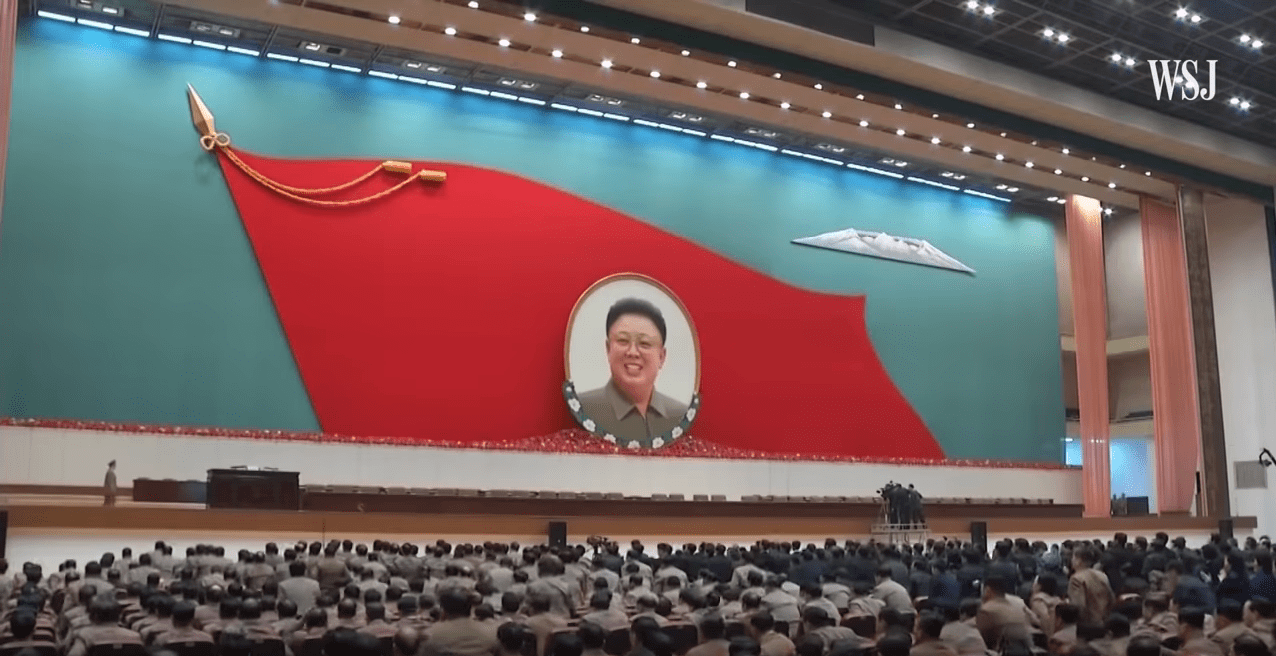 This is the backdrop to the North Korean Worker’s Party. Notice the similar extreme exaggeration in scale. Observe the size of the man standing to the right versus the size of the backdrop. There is no practical reason for this scale except to communicate the power of the entity. 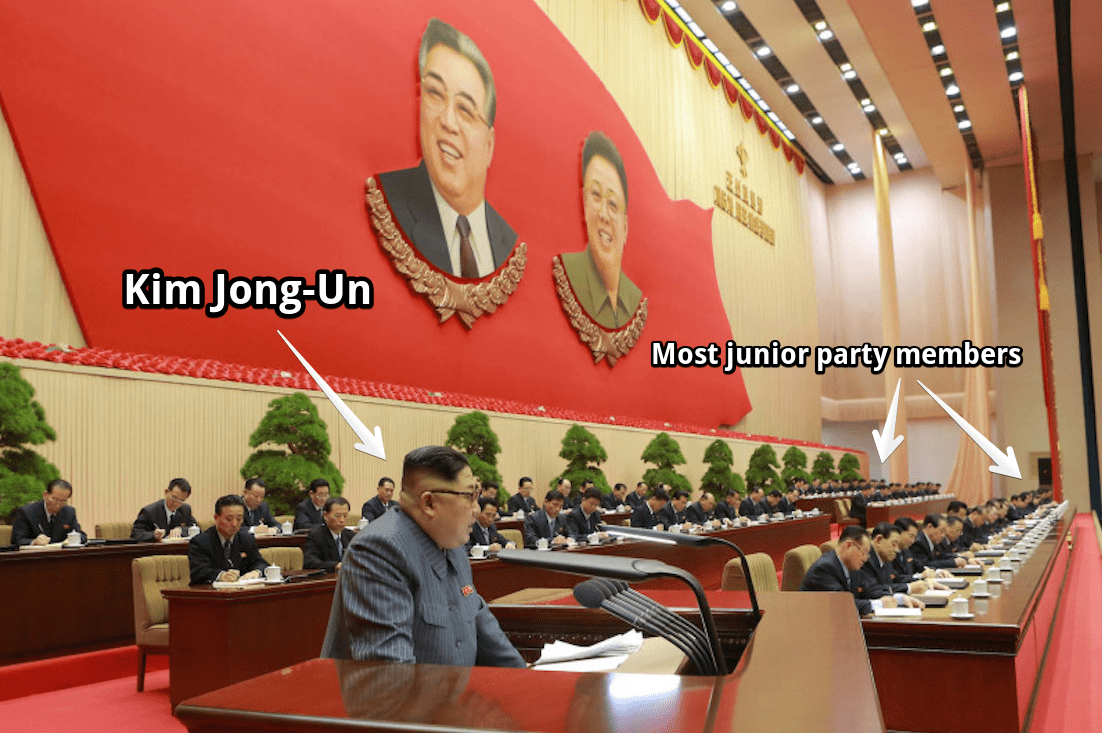 This is an image of the same meeting hall but is a side shot. Because of the perspective, it makes it look smaller than in the front on the shot above. However, this side shot illustrates how impractically the room is designed. The (most likely) junior members of the Worker’s Party are so so far away from Kim Jong-Un that they can’t see him (at first, we assumed that they were looking at monitors built into the desks, but this side view indicates that the only have note pads). If most of the Worker’s Party officials can’t see the speaker, why are they upon the stage, and why is the stage so long?

A Presentation Setting as a Movie Set

All of this illustrates that the room is not designed for user interaction but is instead designed to show the importance of the proceedings. The speaker presents and everyone else listens. Something else which is telling is that every single Worker Party member seeks to be taking notes at the same time. To anyone who has taken notes, this is unusual if it just happened to be randomly the case when the photo was taken, and it indicates that the profuse note taking is performed to show deference to Kim Jong-Un, so they are “taking notes” at all times.

In North Korea, there is no “fact checking.” Anyone who disagrees with the state is often sent to a Stalinesque prison camp with their extended family. Therefore, the regime never has to worry about having anything it says being verified. Much of North Korean displays (pictography, monuments, news reporting) are about exalting the state.

How Does North Korea Compare with the Netherlands in Set Design?

The Dutch have a highly practical culture, a cultural disdain for hierarchy, and unlike North Korea, good outcomes from their government. Given this, and given that the Netherlands is far more wealthy than North Korea and thus has far more resources to spend on government buildings, what does the Dutch Parliament look like?

The Dutch apparently decided to have their Parliament furnished by Ikea! This level of expense is roughly approximate to many large conference rooms at well-endowed universities. Although if one takes into account the upper deck, the overall room is a bit larger. Observe the background. There is no Dutch flag, no photographs of past Prime Ministers. In fact, if you magically appeared in this room until someone begins speaking Dutch, you would not know where you are.

Other Examples of Overwhelming Set Design

Long before SAP or North Korea, the Catholic Church has been overwhelming its followers with ostentatious displays. If one travels to various smaller towns in Europe, it is curious to find that the largest or most prominent buildings are churches even today.

And at the “headquarters” of Catholicism, the set design is quite extreme.

Very nice, but what is the point of this type of expense? 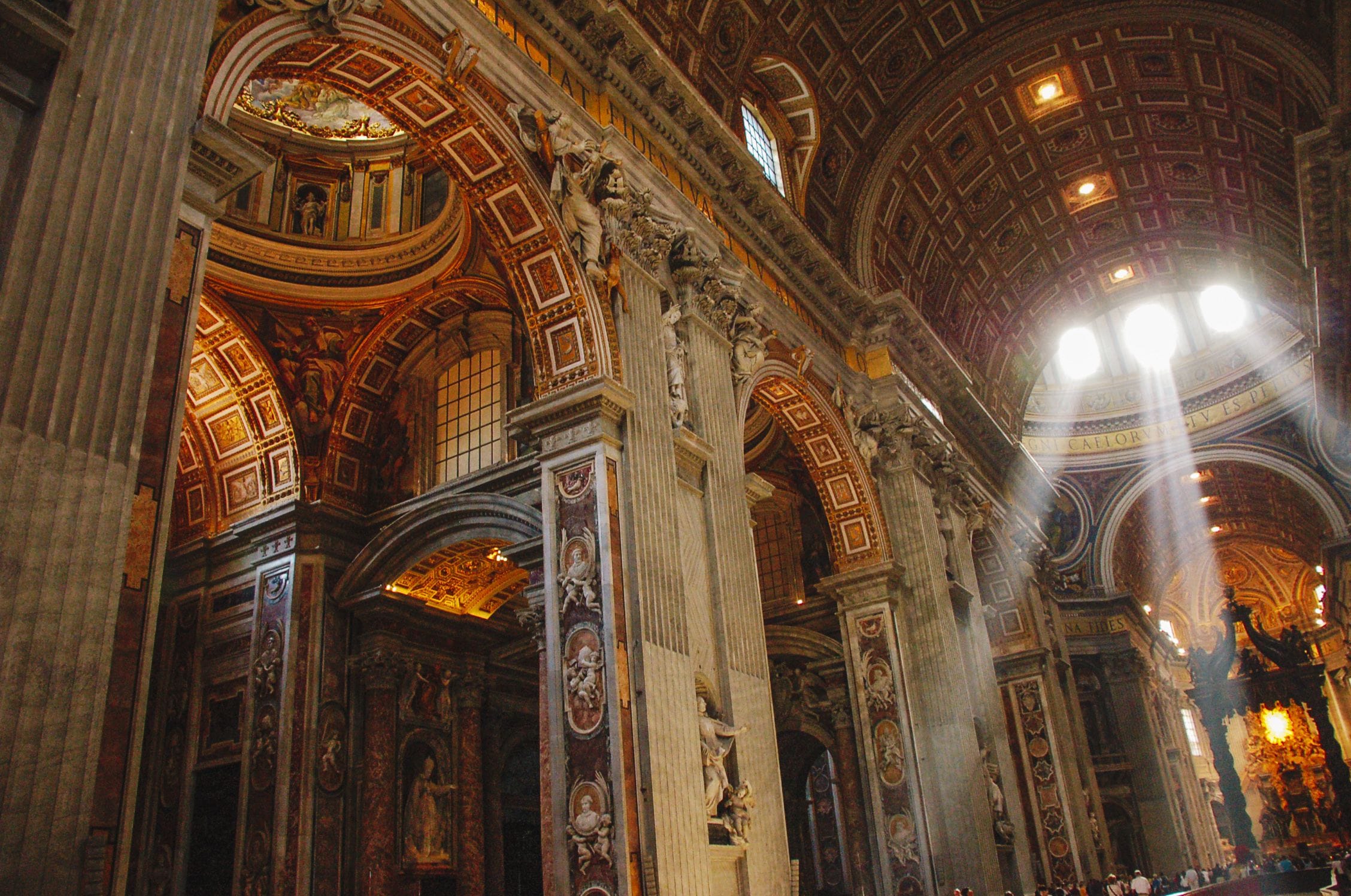 The effect of not only the Vatican structures but of churches generally cannot be understated historically. This is expressed in the following quotation from Rick Steves.

“Art was a tool of the church, both to teach and to terrify. Imagine, once a week, illiterate peasants would walk into a church and be wonderstruck by stained glass, towering columns, and glittering glories. Church art gave them a glimpse of the amazing heaven that awaited them and reward only the faithful, and the terrible hell that awaited those that disobeyed.”

When it comes to answering questions about their history or their Catholicism statements, the Catholic Church has no interest in answering pointed questions. They would instead “let their buildings do the talking” (where they are very strong) rather than with their logic or evidence (where they are fragile). As with North Korea, there was never any fact checking accepted and was generally dealt with by declaring the fact checker a “blasphemer.” Today being labeled a blasphemer to some that are lucky to live in countries that do not have blasphemy laws, but that is certainly not everyone. In the past, blasphemy was used quite extensively to eliminate any fact-checking.

The same holds for North Korea. The North Korean regime cannot be justified in terms of the outcomes for its citizens. Therefore they rely upon a combination of their control over media, their ability to eliminate people that are dissidents, and they move to make arguments based on their buildings and monuments. That is, they use physical props to provide evidence of their power. North Korea’s political regime and the Catholic Church are unified in their support for the concept that their followers should not question but should have faith. SAP and SAP resources also share this perspective. And as the edifices employed by entities grow, their degree of separation from reality also correspondingly increases, and the degree to which they tolerate fact checking decreases.

This week’s attendees at SAPPHIRE and SAP customers generally should observe that having a huge Jumbotron or a large conference hall, or a giant North Korean flag in the background or a beautiful basilica does not make the entity says true.