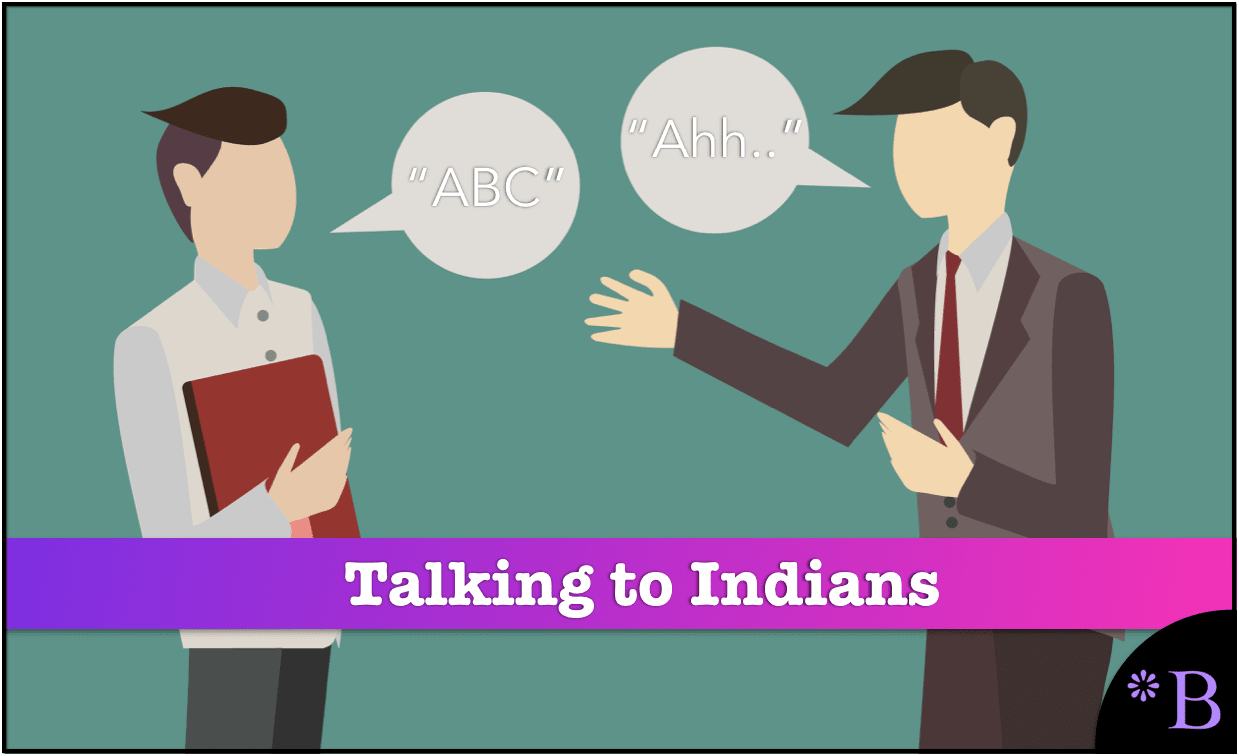 Indians are immigrating to the US and other white/European based countries in massive numbers. Most Americans initially treated Indians as if they were American in culture without considering the cultural differences of Indians. In this article, we will cover how Indians use language differently.

American culture is to use conversation to share ideas, to give instruction — in the case where one person is higher in the hierarchy. That is, conversing is primarily about sharing information. Indians do not follow this approach when conversing — and this particularly true when an Indian is dealing with a non-Indian.

Cheating or Taking from Non-Indians

Indians generally view domestic US IT workers as lacking “survival skills.” India is a brutal place to live — and it creates a highly suspicious and grasping culture. Most Indians are incredibly comfortable with theft and labor exploitation. That is just how things are in India and there is little discussion of reform and Indians’ culture is only to maximize their exploitation of an existing system.

The Objective of Interaction, From the Perspective Of Indians

When Indians interact with domestic US IT workers, they primarily see it as a way to take something from domestic US IT workers. I stopped speaking to Indians because I did not find I was having conversations with them. I found instead I was being “probed” for information that the Indian could use against me at some point in the future. This is why Indians present such an appealing demeanor in the beginning. The point is to get the target to lower their guard, so the maximal amount of information can be extracted as the target is not yet apprised of the Indian’s plans.

Indian Conversations as a Type of Espionage

One trick Indians do in IT is interview people doing jobs in companies. After they have learned what they do, they set up some ridiculous and irrelevant deadlines which the person cannot meet, they then undermine the person to their boss, and state that they are doing a bad job and know someone (always an Indian) who can do that job “much better.” Once again, the conversations are very pleasant. The Indian hides their intent until they can ambush the person they are extracting information from.

These are some of the things we have noticed when interacting with Indians — primarily because of our work in the IT field, which has a high percentage of Indians.

Observation #1: Indians Are Not Potential Customers

Indians are not potential customers. Indians will get in touch with us, but it does not lead to buying research.

Indians will often be very congenial (the information gathering stage), but they do not follow through on what they say they will do. Indians will effortlessly lie about how they will do something, and then just never do that thing.

Indians are unreliable, and the information they provide to you has little meaning.

Indians are very comfortable lying and do it like fish drinks water. For example, in recruiting, they will take a resume from a US domestic IT worker, place an Indian name on it, and then obtain a higher margin by faking the background of the white resource. The intent in speaking with the white resource is to obtain their resume, which they can then use to market an Indian. We cover in the article Why Dealing with Indian Recruiters is Futile and Pointless for Domestic Workers.

Observation #2: Indian’s Deceptive Back Story About its Inability to Make Any Social Progress

Indians have a high class, caste, and discriminatory racial history. Through false education in India which deliberately blames Europeans, Indians have been taught that most of the problems of India have nothing to do with India but are due to the British colonialization of the country.

India has had 70 years (in a way it’s longer than 70 years, as the British began pulling out of many parts of India in the 1920s) since the “official” end of British colonialization. In this time India has done virtually nothing except increase their population from 350 million to 1.5 billion, creating an ever more desperate situation for themselves. As for legal progress, there is no functioning legal system in India and judges are routinely bribed. Indian elites, which promised great progress to their citizens in support of independence, has the same sedition laws on the books that the British placed there.

Because the Indian elites preferred to use the sedition laws against the larger Indian population. As a consequence, Indians have zero experience in a free society or any understanding or appreciation of freedom of speech.

Most Indians consider India hopeless — and want to leave. In India, everything is highly tribal, and they have brought this pattern of behavior with them from India to the European based countries where they have immigrated. Most US domestic IT workers have no idea of this cultural background, and therefore, what they are dealing with.

When Indians are gatekeepers, they want to direct resources to other Indians. In many cases Indians are not satisfied with the employment, they must find a way to rig the interior orientation of their employer to benefit them in corrupt ways.

This is considered by Indians as having “survival skills.” We cover this article in The Problem With Indians as GateKeepers for US IT Purchases.

Over time we have come to make the following adjustments to deal with Indians properly.

If we receive an email or a comment on the website from an Indian, we ignore that email. The message will invariably be asking us to do something for free for them. The same goes for LinkedIn invites. Indian invites get ignored. I recommend that others follow this same approach and pretend that Indians do not exist.

It is important to remember that Indians are waiting for you to say something that they can use. They are probing for a weakness.

For example, an Indian will ask what issues there are in a project. The Indians will pretend that they just want to help. As soon as they find the issue or the weakness, they will often send that problem to the superiors, and then point out that some people that work in that department could be replaced — which would solve the issue. As soon as you tell them a plan, they try to figure out how they can personally benefit by undermining this plan.

Indians have no historical experience with respecting the IP of others. For Indians, IP is something for them to steal. We installed a plugin that prevents copying text — and we did this specifically to stop Indians from using our IP. Although we later also found that Chinese, both in China and Chinese that have immigrated do not have respect for the IP of others. Someone from China translated an article we wrote and placed it on their website. Again — they never contacted us. This also recently happened with a Pakistani website. India and China and Pakistan blame their problems on European powers — and therefore, it is considered acceptable to cheat to Europeans as whites were involved in colonialism — and of course, even whites that had nothing to do with colonialism or lived in countries that had colonies (like Ireland or Norway) are also to blame — as all whites are part of a single group that can be cheated. But this is just the cover story, because Indians cheat other Indians as well. Cheating is Indian.

This is not just an Indian/European/white issue. Indians prefer to cheat whites, as they are easy targets coming from a high-trust culture. However, we now have many people of all races in both the US and around the world reaching out and providing examples of where they have been discriminated against by Indians.

We recommend to all domestic US IT workers that deal with Indians that they put into place controls for how they share information with Indians. For us, blocking Indians has saved us a lot of time. The first step is to attribute mal intentions to not just some Indians, but all Indians. We tried being selective and ran into the same problems with what we thought were “good Indians” versus “bad Indians.” The primary difference is that it took longer for “good Indians” to show themselves — whereas “bad Indians” were more transparent about their desire to steal from us.

Indians have a sense of entitlement that is extraordinary and persistent. It means that Indians feel they have the right to take advantage of other people. Once caught, they will typically either complain about the forceful response as being “unprofessional,” or they will accuse the person that caught them of being racist.

There is literally no way to win.

As explained in the movie War Games — the only way to win — is not to play.