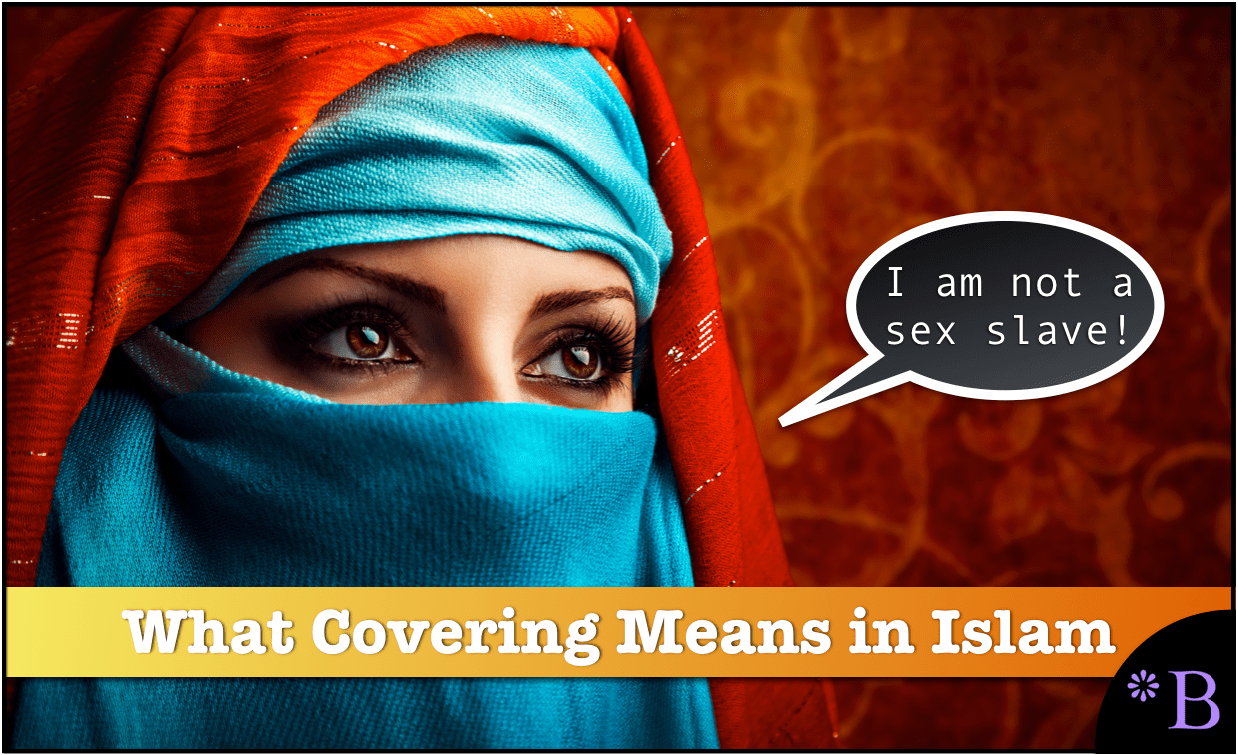 It is considered a sign of being an open-minded liberal to support the covering of Muslim women that live in Western countries. What usually is not understood is that covering women is a way of delineating the resectable women from the unchaste. That is, those that do not cover themselves are considered disreputable women. This means that women in Muslim societies and Muslim communities don’t have a real choice for head coverings when living outside of Muslim societies.

Muslim Women Differentiate Themselves From Sex Slaves or the “Charmuta”

Islam has a long history of sex slavery. This is something I cover in the article Islam and Sex and Sex Slavery. And also, in the article How Many Sex Slaves Did Islamic Leaders Have? Sex slavery was a significant motivation for conquest, and sex slavery is strongly endorsed in the Koran. Sex is also used to motivate men to become martyrs for Islam, as those that die as martyrs receive not 72, but a virtually unlimited number of virgins in the afterlife. However, within Muslim societies, there had to be a way to determine the difference between sex slaves and non-sex slaves visually. And the way this was done was through covering. In Islam, the hijab is considered the minimum allowable coverage. Covered women are decent women, and uncovered women are “sexually available.” Western countries would not accept a visual cue for other types of slavery; however, they accept it in the case of Islam because Western countries don’t understand the history of Islam, and allowing coverings makes them feel tolerant.

Both sides of the political spectrum have a very weak interpretation of Islam. The Democratic or faux liberal side wants to embrace Islam to seem tolerant, but without understanding that Islam is completely intolerant. Democrats or faux liberals condescend to others on the topic of Islam without knowing anything about Islam and repeating talking points provided by Muslims bent on lying about Islam. Republicans opposed Muslims, but primarily due to the fact that many are more serious Christians, and the Muslims are seen as a general threat to Christianity since they lost all power in Spain in 1492 (coincidentally the date of the discovery of not North America but the Bahamas).

That is 520 years ago. Why are people still talking in terms of Muslims being a threat militarily?

Is The Author a Christian?

This is not related to the points I have made in this article. I am not a Christian, don’t support Christianity or any other religion. My opposition to Islam is due to the behavior and outcomes that go hand in hand with Islam. Head and body coverings for women are just one in a long line of terrible Islamic ideas.

A second reason Republicans or Republican-leaning individuals in the US have for opposing Muslims is that they have concerns about terrorism. In terms of comparative violence, the Western countries are far in the lead versus Muslim societies, which have such a low competence level, it would be impossible for them to even try to attack a Western country. As it is my view that 9/11 was performed by the Bush Administration, I do not even accept that highly unusual event as Islamic terrorism. Just the sophistication of the 9/11 attack combined with the compliance required from US defense systems to allow such attacks to occur — is evidence that these attacks could not have been pulled off by Muslims.

Observe the map of average country IQs above. The typical IQ of a non-black Muslim country is around 85. This is roughly the same average IQ of Latin America (the highest IQ in Latin America being Uruguay, which is around 90% people of European ancestry).

Does anyone think Latin American countries could be a threat?

These are not societies that would pose a military threat to European-based countries — their threat is in the form of immigration. Successive Republican administrations have tried to build up Muslim terrorism after the Soviet Union fell into kleptocratic disrepair.

However, these countries are not real threats — not because they would not like to be, (they are instructed to spread Islam through violent conquest) they are just not sufficiently organized or competent to carry out the wishes of Mohammed. The US repeatedly bombed pathetic societies like Iraq, Afghanistan, and Syria (among others) that find challenging to manage sewer systems. This obsession with trying to replace Russia to keep up obese military expenditures is tedious and not believable. However, Muslims are a threat if you allow them to immigrate into your country. Islam is a type of “dirty bomb,” that has degraded every society it has influenced or that has come under its control.

However, getting back to the Republican opposition to Islam, terrorism is also not a reason to specifically oppose mandated head and body coverings for women. Republicans are correct that Muslims are “bad news” and right to seek to oppose Muslim immigration, but they seem confused on the details as to why. But they are directionally correct. Trump was required to declare his reason for a Muslim ban was to stop terrorism. He could not say the real reason, which is that the best reason for a ban on Muslims entering your country is well….Muslims.

Overall, Western societies have a very high level of ignorance on the topic of Islam and Islamic history — and it applies to both sides of the political spectrum.

The History of Sex Slaves Taken as Mohammed’s Conquest

An account of women taken as slaves in battle by Muhammad’s men after their husbands and fathers were killed. The woman was raped with Muhammad’s approval. – Sahih Bukhari 62:137 (The Religion of Peace)

Another account of females taken captive and raped with Muhammad’s approval. In this case it is evident that the Muslims intend on selling the women after raping them because they are concerned about devaluing their price by impregnating them. Muhammad is asked about coitus interruptus. – Sahih Bukhari 34:432 (The Religion of Peace)

The nice part about covering women is as a Muslim, you are encouraged to lie to non-Muslims about the logic behind the Hijab.

There are numerous false videos are rampant on YouTube, where every accurate observation of Islam is categorized as ignorant bigotry, and the videos lie to non-Muslims about Islam.

As I cover in the article The Islamic Requirement to Perform Taqiyya and Lie to Non-Muslims, it is considered virtuous to lie to the non-believers, who do not deserve the truth.

As per Mohammed, they are “lower than dogs and pigs.” Why would you bother telling the truth to a dog or a pig? Do you think your dog or a pig at a farm deserves the truth? Of course not.

Credit Bill Maher, who is a bit of an establishment Democrat, for being clear-eyed on Islam.

This segment is hilarious — and yet offended Muslims and many liberals. It was removed from YouTube, so I had to find the segment on another YouTube channel.

What is curious is how completely this real Muslim fashion show is without any observable creativity. There is some color differentiation, but outside of that, it all appears to be the same basic design. Muslims want to immigrate to white countries, but what are they bringing to the table? Repression and a 7th-century Arabian mentality.

Observation #1: There Should be Differences Between Outfits in a Fashion Show

Why do all of the women look depressed?

Were the models told to be reserved so as not to inflame the passions of men with the filthy vessels that are their bodies?

The entire vibe of this show is quite odd. This could be a commercial for Paxil. This is the before segment where the potential customers’ depressed state is described.

I found this video while searching for a normal fashion show. This looks like a great time. Why did I not get an invite?

Furthermore, these women look great. Even other women like looking at beautiful women in creative outfits. They did not “lose their virtue” by prancing around in their undies. Women in swimsuits are not sex slaves. Grow up Muslims!

This probably explains why you barely hear about Muslim fashion shows. Such a thing is an oxymoron. Muslims don’t realize that one is supposed to show creativity to have a fashion show. I am not sure that Muslims actually understand what creativity is. But I can say definitively — that is not it.

Allowing Muslim women to be covered is not a sign of progressivism and tolerance. It is based upon either not understanding the history of Islam and its sex slavery or being tolerant simply to show that you are tolerant rather than critically analyzing what the covering of women represents. Universal and unthinking tolerance to all things — as long as they are foreign, is a form of idiocy. Finally, Muslims lie to non-Westerners when they say that Muslim women cover because of “choice.” Western liberals need to come around to understanding that they are constantly being lied to by Muslims about Islam.