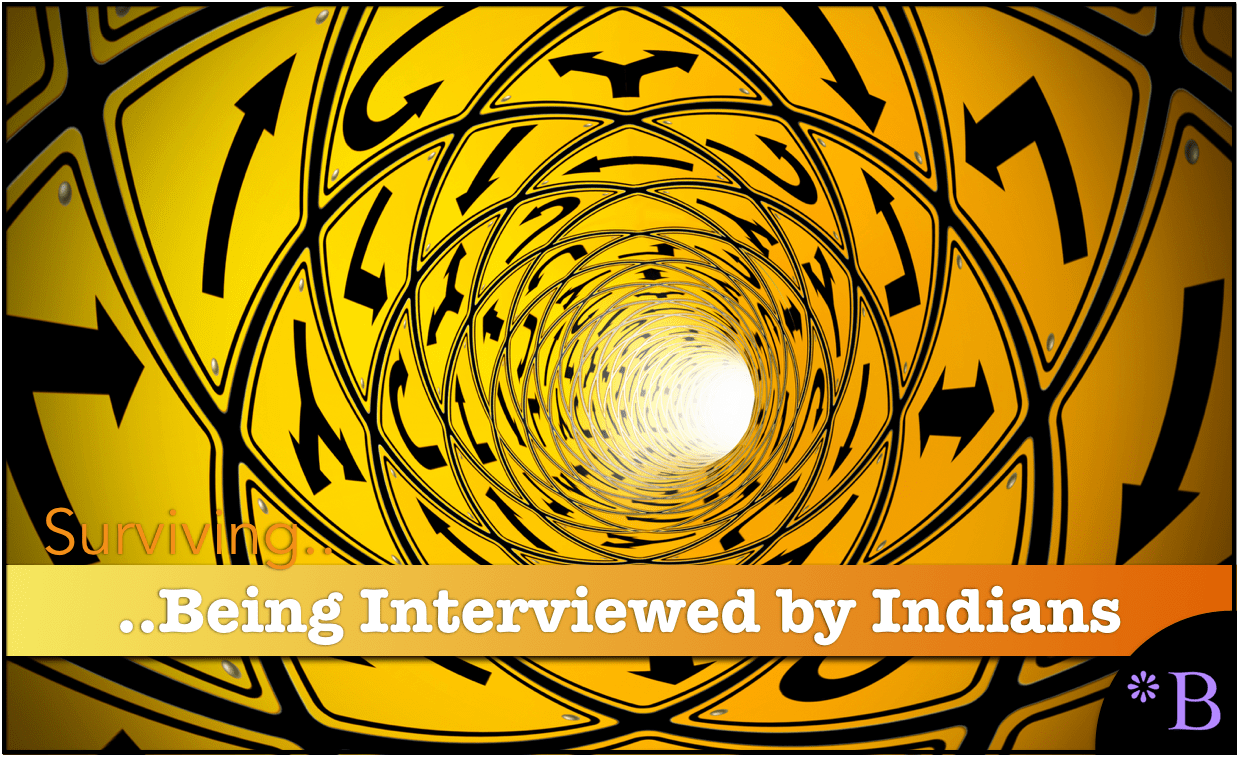 Domestic US workers increasingly have to interview with Indian resources. Usually, the effect of interviewing is negative for US workers for two reasons.

See our references for this article and other articles on Indian IT recruiters at this link.

The following was communicated to us by a reader.

If they are in a bad mood or actively hostile or it feels like an interrogation then you already know that’s its not going to go well and you might as well go home then put up with their abuse.

While Indians demonstrably have a weaker understanding of English than educated Americans and also have a much less understandable accent, Indians like to presume that their English is excellent and that any problem understanding their English is the fault of the English as a first language speaker. This is also explained in the following quotation.

Many times they will have very heavy accents. If you say that you didn’t understand they seem to get offended. Most people from European backgrounds would have no problem rephrasing their question with different words. The Indians will repeat back to you exactly what they just said the first time. Aside from soft voices, mumbling and language barriers they expect you to give them answers that are phrased EXACTLY the way they memorized the answers. The huge problem with this is that there can be many ways to learn and understand topics that can even include using different notations. I’ve even tried to explain a few times that in chemistry there can be like 5 different names for the same chemical compound, and so in this context, I might know the concept they are asking but with different notation or vocabulary. That never helps. If you don’t repeat back to them the EXACT words from the Coursera slide they memorized then you get it wrong.

Oh and they never tell you the correct answer.

The Indian education system is more based upon rote memorization than Western systems, and the overall culture is strongly hierarchical, which creates difficult and uncomfortable environments for people who grew up in really any Western country. Many Indian work environments, as we cover in the article How the Awful Indian Employment System Works. And this is one reason why so many Indians seek their H1-B visa and citizenship — but the problem comes in when they seem to bring this abusive work culture to every Western country where they emigrate.

Insensitive to Requests on the Part of the Interviewee

Job interviews have a natural power imbalance. However, when being interviewed by Indians, numerous domestic US resources describe how Indian interviewees seem to go out of their way to magnify the power imbalance. The following quotation is a perfect example of this.

People from other parts of the world usually give you some feedback, especially with coding interviews. I had a recent tech interview with Twitter. The connection was terrible. This guy was in a very small room with walls that bounced sound all over. He was also on speaker phone which I’m pretty sure was also as far away from him as possible. I could barely understand him with all of the above. Secondly, he had a heavy accent. I told him five times that the volume on my phone was maxed out and I could barely hear him. I kept asking him to call me directly on a real phone. He didn’t believe me about the sound quality and wanted to start on the problem.

This behaviour can be a power trip on the part of the Indian, but it can also be sabotage on the part of the Indian. As we cover in the article How Indian IT Workers Discriminate Against Non-Indian Workers, Indians have shown an international pattern of discriminating against non-Indians. Brightwork Research & Analysis receives feedback on the Indian worker issue from all over the globe, and the pattern is not merely limited to Indian versus white, as we receive of discrimination from Asia by Asians, as well as Asians in the US and Europe against Indians.

A Sucker Punch for US Domestic Workers

When the H1-B program has rigged by lobbyists and billionaires as we cover in the articles, Why Do So Many Billionaires Love the H1-B Worker Visa? And Why Are 47 Entities Lobbying in Favor of the H.R.1044 IT Immigration Bill to allow massive numbers of Indians into the US, it was never discussed that discrimination not only in favour of Indians but by specific Indian castes against other castes and certain regions of Indians versus other Indians is entirely accepted in India.

Clarification Questions Can be a Source of Conflict

In American culture, it is typically accepted that questions of clarification can be asked by the interviewee. However, Indian culture often does not allow for this or sees this as a challenge to the position of interviewer.

This is very easy to trace to the hierarchy of the Indian culture.

In Indian culture the person in the position of power is not to be questioned by the one with lower power — and this is true on many occasions when this questioning is intended to provide the interview with the information they need to answer the question, as is illustrated in the following quotation.

I asked him is this going to be Python, SQL, Pandas? That’s a legitimate clarification question that ANY interviewer should tell you (and the next interviewer did). This interviewer said I was not allowed to ask questions until he read the entire problem statement.

Strategies for Dealing with Hostile Interviewers

If someone is hostile, abusive or can’t communicate properly — I’ve learned to end the video/voice call within the first 5 or 10 min of the interview and message the recruiter RIGHT away. You can tell the recruiter that the sound quality was terrible and ask to reschedule. With larger companies, this helps roll the dice and hopefully, you will get someone from a European background the next time.

Better yet — pre-screen your interviewers by name and just make up reasons for rescheduling a couple times until you get someone from a European or Asian background.

Our contact is mostly doing what he can to stay away from being interviewed by Indians. We need to reiterate at this point that Indians, who are almost all recent immigrants to the US are viewed as hostile to non-Indians to the degree that an individual from any other racial group is considered preferable.

These quotes demonstrate a vast disconnected between cultures. And the problem is that US citizens are being asked to adapt to the Indian culture, which is quite unfair to US citizens.
Is this what we were told was going to happen when the whole H1-B circus got started?

No. And not only this, the topic is virtually invisible on the Internet.

Furthermore, the overall topic of adjustment on the part of US citizens is undiscussed in the literature around H1-Bs, where everything is centered on the discussion on the need for “skills” without any consideration for the effect on US workers. Essentially the narrative is that Indians show up and fill positions for which there is a “skill shortage.” And then that is it. That there would be no impact on the domestic worker.

This has proven to be demonstrably false.