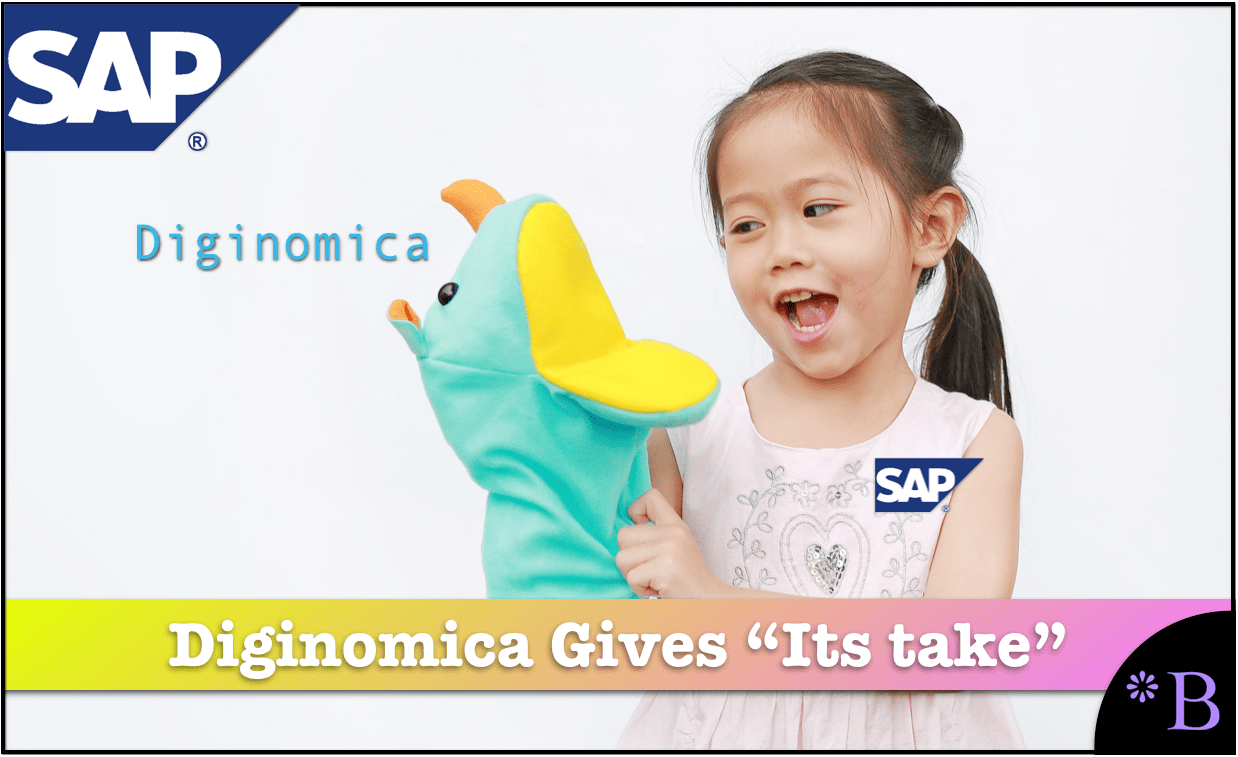 In this article, we will cover Diginomica’s terrible coverage of SAP S/4HANA.

As is usually the case, Diginomica receives most of its information about SAP by interviewing senior resources at SAP.

As has become customary over the last year, I spoke with Markus Schwarz SVP and general manager SAP S/4HANA as part of the conversations around SAP Q1 FY2017 earnings.

The headline new adds of 400 customers in the quarter caught everyone’s attention as did the fact that nearly half of those adds were net new logos. The total customer count on S/4 now stands at 5,800 with SAP CEO Bill McDermott claiming that 80% of SAP customers are now in the SAP S/4HANA pipeline. Be that as it may, attention now turns to what’s happening on the ground.

Diginomica merely repeats what Bill McDermott says without providing any analysis. Yet, it is well known that Bill McDermott continually lies about SAP’s customer numbers. We covered this in the article How SAP Controls Perceptions with Customer Numbers and the article on Inaccuracies in the Q2 SAP Earnings Call.

Furthermore, notice how Diginomica quickly moves away from verifying what Bill McDermott said. Howlett states, “be that as it may,” as it is assumed to be true. He then states,

“…attention now turns to what is happening on the ground.”

We have evaluated what is happening on actual projects in the only independent research on S/4HANA in A Study on S/4HANA Implementations. But Diginomica would never get into that type of detail as they don’t know what is happening on real implementations as virtually all of their information comes from going to conferences and talking with executives.

Regular readers will recall that a year or so ago, much of the S/4 attention was on S/4 Finance – or simple finance as it was known. There was a perception that SAP S/4HANA ran the risk of being a ‘rinse and repeat’ of 1990’s R/3 implementations where the focus was on driving out back office cost through process improvement.

Fast forward to today and the picture has changed dramatically. Schwarz told me that SAP is now seeing 33% as finance led, with 67% being what SAP terms ‘full stack,’ for the digital core, which includes supply chain.

Secondly, the numbers quoted by Schwartz are false. At this time, eight months after this Diginomica article, there are almost no “full stack” implementations of S/4HANA. The primary reason? S/4HANA is still not a completed product and has maturity issues in every dimension. S/4HANA currently has major performance problems running MRP, as is covered in the article MRP Performance Problem with HANA. Version 1511 of S/4HANA is missing intermediate document support in at least one module that we know of. There is a lengthy list of issues with S/4HANA that prevent it from being taken live as a production system. Other problems include the fact that Fiori’s future is in doubt, and S/4HANA is mostly similar to ECC, so the value in any upgrade is quite limited.

But as Diginomica has no one with implementation experience, and no interest in validating SAP claims, as SAP pays them, Diginomica will not be getting into those details.

The difference today is that (version) 16/10 got us the much needed supply chain content integrated and available for general use. Customers have been waiting for that and now you see fast adoption.

No, you don’t. Eight months after this article was published, you still don’t see much adoption of S/4HANA, much less fast adoption.

I wanted to know whether in SAP’s view, this represents something of a tipping point in the sense that the company can expand its horizons beyond the obvious strategy of protecting the installed base. In that context, I wondered whether the persistent questions from user groups about the value proposition are fading away. So what do the ‘mittelstand’ (mid-size) customers think?

The largest customers have been the ones who moved first as you’d expect but I am also seeing momentum in mittelstand. I don’t see any difference in terms of adoption, I sometimes see it in geographies, we have a very good adoption in the mid-size.  There are no anomalies I can detect when you compare to SAP other software.

That is interesting because we do see anomalies.

One major one is that there is a high concentration of S/4HANA test systems in Germany. Our hypothesized reason for this is that SAP is particularly influential in German companies. The attempted implementations in Germany of S/4HANA were due to political power, not to the product.

Of course there are different adoption patterns emerging so for example the large companies pick a line of business to go live fast to collect the experience and plan in parallel the large move. That’s a pattern we see firming up. That way you can create early proof points and trust. The days of the big bang are over.

This response seems to skirt the issue that, in reality, there has been little adoption of S/4HANA and an even smaller number of go-lives.

The ongoing concern about value has plagued SAP since the launch of SAP S/4HANA and I wondered how SAP is tackling that in the context of so many buzzwords around digital transformation, AI, IoT and so on. In his quarterly remarks, McDermott didn’t fight shy of talking up those topics but in my conversation with Schwarz it became clear that SAP is matching its offering to specific business change patterns.

This is almost the first criticism offered by Howlett. But it is not pointed but gets to the confusing jumble of trendy technology terms that SAP marketing has used alongside S/4HANA in marketing materials.

It essentially sets up Swartz to say that SAP has this topic covered. Let us see his response.

Every industry is faced with some sort of transformation problem that requires they develop service based models. The consumer company that becomes a retailer, the chemicals company that becomes a supplier for automotive, the utility that starts selling solar panels. I’ve seen Air-as-a-service for example. Farm machinery companies are looking at how they can rent their equipment to many customers.

Notice that Howlett does not bother explaining to Swartz that this was not the question he was asking. Howlett is reticent to even clarify with his interview subject that the answer he gave is not to ask.

With manufacturers we see this motion to get to a segment of one at a lot size of one at large scale. Nike, any sports apparel company today sees people ordering personalized through multiple channels and that impacts through the supply chain at a fine granularity.

This is Swartz discussing a topic that is not his area of expertise. Nike does not use a lot of size one. Swartz is mostly pitching the “make to order” trope that is both inaccurate but has nothing to do with Howlett’s question.

These are very different ways of doing business that require a digital framework, which is what we are offering.

This sentence was meaningless.

On the ground, Schwarz says that his soundings among the top 50 partners suggests that they are seeing a boom in business that they’ve not seen since the 1990s. I have not tested that extensively although the partner representatives with whom I keep in touch tell me they are run off their feet.

First, that comment is ludicrous. SAP is not seeing anything like the growth that it saw in the 1990s when it went through a major growth spurt due to the popularization of R/3 from R/2. Secondly, good luck taking any of those S/4HANA sales live. It is sporadic to find consultants with a single S/4HANA implementation on their resume.

This is an essential part of the article. It is where, after passively allowing his SAP interviewee to say anything without pushing back at all, Howlett attempts to appear impartial.

That was a good place to bring our conversation to an end. With SAPPHIRE just a few weeks away, Jon Reed and I will be on the ground, hunting down those customers, hopefully getting some of them on our video couch while at the same time checking in with colleagues in the field we have known for many years.

If what Schwarz says is validated in the manner he promises then I suspect we are in for interesting times as  SAP watchers. I, for one, will be glad. While it has always been possible to get glimpses of the vision, the marketing clarity has been absent as have the expression of outcomes.

Last year for example, SAP got a nasty shock when it realized customers had huge problems understanding how to achieve value for S/4. McDermott was quick to acknowledge that and tasked his delivery teams to fix the problem as quickly as possible. That work is done and in delivery.

Notice that the criticism here is that “customers had huge problems understanding.” When Diginomica makes any critique, it is related to something perceptual. Diginomica would not publish any actual shortcomings of S/4HANA. This is one-way Diginomica makes itself look independent. Furthermore, notice that McDermott is said to task his teams to fix things quickly. However, how can you implement a product that is not ready to be implemented?

Personally, I am looking beyond SAP S/4HANA as it has probably been best understood so far. What I now want to see are the business model patterns where S/4 and surrounding technologies provide the technology support for the kinds of transformation we are observing among industries. To that extent, I want to hear how SAP will support an expansive third-party ecosystem for industry solutions at what today appear to be the edge but which may well become the business core of the future.

This last quote by Howlett is a joke. If Howlett is not aware that SAP makes integration difficult for outside entities both technically and in the form of indirect access, he is beyond hope. SAP is not about its software ecosystem (although it is about its consulting ecosystem). It is about undermining the software ecosystem and taking as much as it can for itself. As with ECC, S/4HANA will be a nightmare for other software companies to deal with, as per SAP’s design.

Diginomica is part of the IT media system that allows SAP to get its story out to a series of paid off and compliant media entities that pretend to be independent.