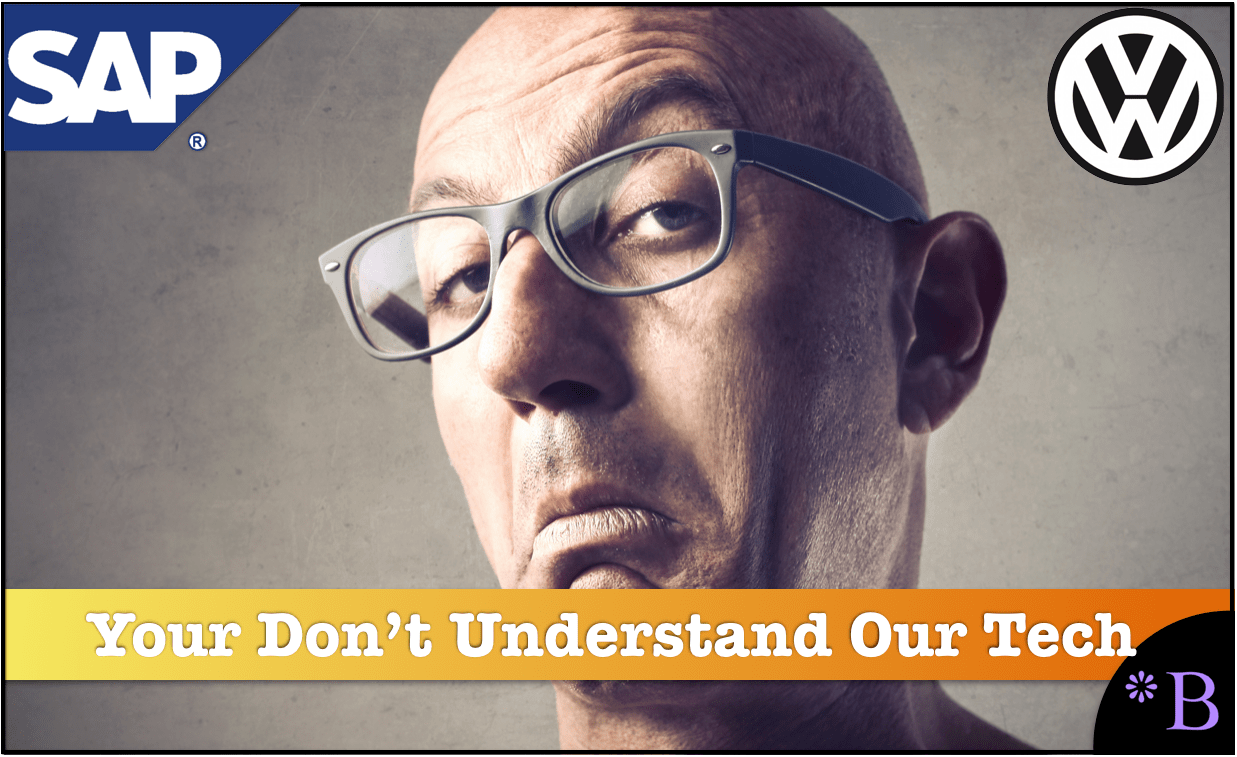 When SAP began aggressively promoting HANA around 2012, it made an enormous number of exaggerated and false claims, including the idea that HANA was new, rather than reverse engineered from other databases. Volkswagen did something very similar with its supposedly new “clean diesel” technology. Curiously, Volkswagen was caught and had to admit fraud, while SAP has largely gotten away with its false claims on HANA. You will see the similarity between what SAP said about HANA and what VW said about their fake diesel pollution capture system.

The VW Versus University of West Virginia Confrontation

The entirety of the budget that the University of West Virginia (UWV) received to test VW’s emission system was $70,000, which was obtained from the International Council on Clean Transportation. This test budget eventually led to a $22 billion settlement paid out by VW. 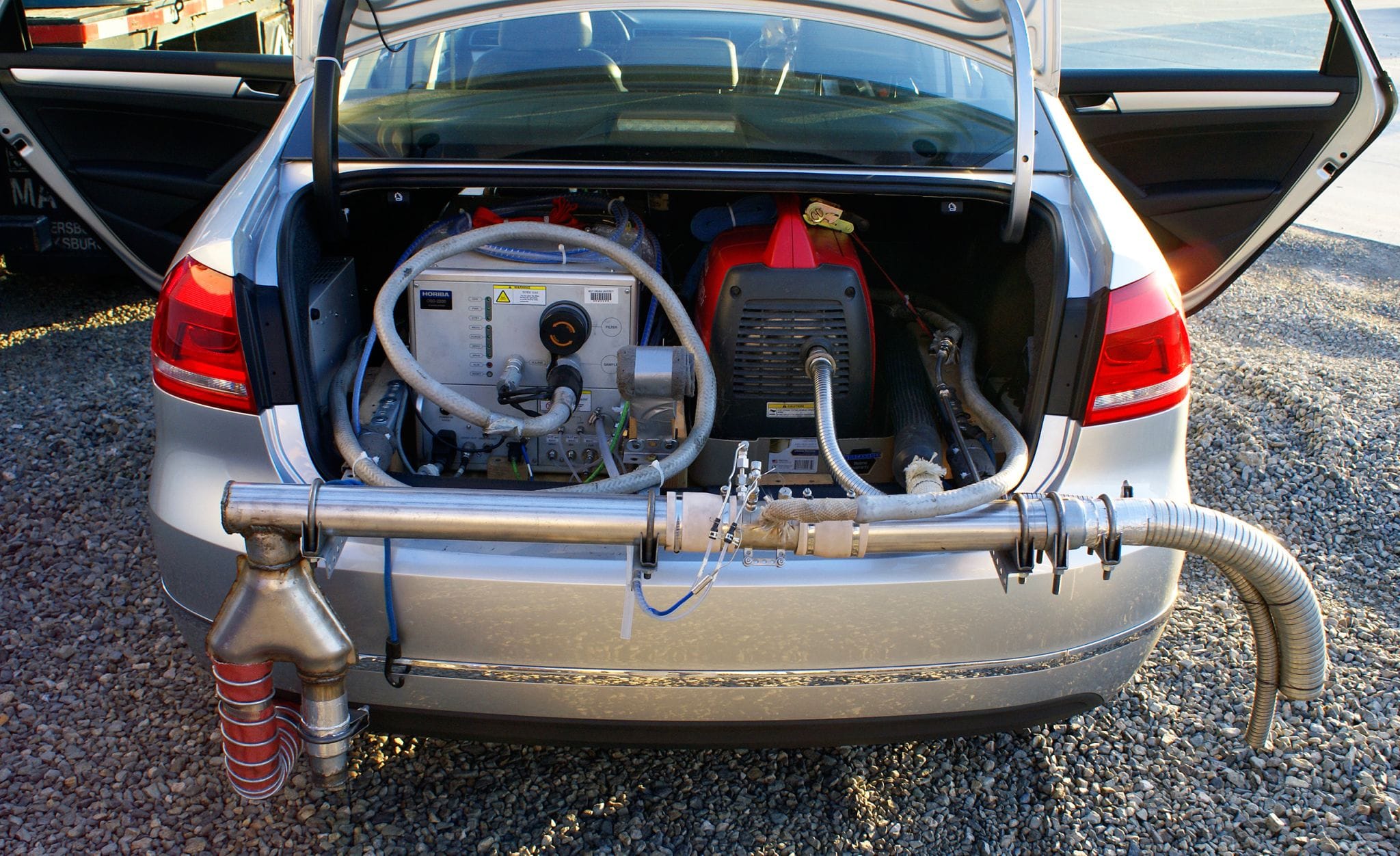 Image from Fortune and West Virginia University Center For Alternative Fuels, Engines, and Emissions. The most important aspect of this rigging was that it tested the car while on the road and not in a small Honda generator powered the device is the emission testing equipment that caught VW.

“Volkswagen has admitted in court documents that it never expected anyone to test its cars on the road, where the illegal software would not work. Part of the difficulty is that measuring the emissions of a moving vehicle is a significant engineering challenge.” – New York Times

Volkswagen advertised its highly polluting cars as being lower emission than a Prius.

Just like any SAP video, this video is highly deceptive. It makes entirely false claims around the cleanliness of their diesel system. Diesel is an inherently dirty fuel because it is not refined. Thus far, the only way to manage diesel pollution is to use a liquid system to capture the emissions from the engine. This liquid must then be switched out.

“Unlike in Germany, the Volkswagen Group of America ran a high-gloss marketing campaign making VW and Audi diesel cars out to be super-environmental. One famous Audi commercial, which ran during the world’s most expensive TV slot, the live broadcast of the Super Bowl, showed America being terrorized by “green police.” A shiny white diesel Audi breaks out of an “eco-check” roadblock and speeds off. The message was: The consumption and emission values of a VW or Audi diesel car were just as good as Toyota’s Prius hybrid, but with superior engine power and performance.” – Spiegel

“In late 2008 a publication called Green Car Journal compared the five finalists of its annual Green Car of the Year award. “Fulfilling this growing desire for vehicles with better fuel economy and overall environmental performance is no easy thing,” it noted. “Rising to the top is the 2009 Volkswagen Jetta TDI.” The car was the winner because its “groundbreaking clean diesel” engine managed to meet America’s “stringent tailpipe emissions standards” while also delivering “admirable fuel efficiency,” “satisfying performance,” and “a very reasonable” price.” – Fortune

VW was caught by the California Air Resources Board of cheating, the conclusion of an investigation initiated based upon the emission testing results at UWV. Yet, for over a year, VW simply continued to tell the regulators that they “did not understand their technology.”

“Volkswagen employees manipulated not only the engine software, but also generated reams of false or misleading data to hide the fact that millions of vehicles had been purposely engineered to deceive regulators and spew deadly gases into the air.” – New York Times

One of the similarities between SAP HANA and VW’s “clean diesel”‘s executives unrealistic expectations. We have documented this at length within SAP where the executives are simply divorced from reality and make statements at SAP conferences and in comments to financial analysts that are simply impossible.

Go to top
Go to top

Review Vishal Sikka’s statement about HANA and genetic algorithms in the following video.

And the following quotation describes the same issue at VW, entirely unrealistic executives that drove their subordinates to cheat to satisfy their bosses.

“The pressure seemed to intensify inside VW. It wasn’t “acceptable to admit anything is impossible,” a company whistleblower told Jones Day, according to the Süddeutsche Zeitung. “Instead of telling management that they couldn’t meet the parameters, the decision was taken to manipulate. No one had the courage to admit failure. Moreover, the engine developers felt secure because there was no way of detecting the deceit with the testing technology that existed at the time.” It was, the whistleblower said, “an act of desperation.”” – Fortune

We have argued that HANA has developed so slowly since its introduction in 2011 because its original design parameters were set by Hasso Plattner, who both did not know enough to design a database and set impossible design goals for HANA. The engineers and programmers have not been able to tell Hasso that he was mistaken.

Those that questioned SAP’s claims around HANA were repeatedly told that they did not get it; they did not understand what a game changer HANA’s technology was. As we covered in the article, Is SAP’s Warm Data Tiering for HANA New? SAP’s new explanation of how HANA memory optimization works entirely contradicts their earlier statements about all data being placed into memory. This means that SAP never had anything that was new or different from the pre-existing database technology.

If you are like SAP or Deloitte, you find yourself making a lot of false statements. And if you tell stories that end up not coming true, you eventually have to pivot to a different topic.

When I have been censored on SAP projects, invariably the criticism was not on the topic’s details but that I was “focusing on the wrong thing.” This happens when I uncover a major error made by some individual management who wants that covered up. At that point, they prefer you redirect your efforts to “important things.”

Let’s take a look at the Volkswagen case. Volkswagen was caught red-handed by the University of West Virginia pollution testing lab.

For a year, Volkswagen stonewalled UWV and stated:

“You just don’t understand out the technology.”

Finally, when pushed against a wall, they were forced to admit the entire diesel pollution trap they came up with was a sham. (although it always sounded fishy, diesel emission cleaning systems up to that point required liquid, but Volkswagen’s didn’t) It’s important to know that Volkswagen almost did not get caught. They stonewalled everyone incredibly effectively.

SAP proponents did this when they ran into a logical cul de sack on defending SAP’s claims on HANA performance claims. They pivoted to HANA, “not being just a database,” and moved to another series of false statements. This was prefaced with “the thing you don’t understand.” Again, the intelligence of this maneuver is that the technology changes the entire dynamic. It is the person researching the topic that is at fault. Not the faulty information. Not people that released the faulty information. But here is something I learned from a lot of debates. Check into the next thing that the person proposes. Usually, that will end up being false too. People who make false statements don’t make just one. They make many. That is why, in my view, one wrong statement is so damning. It may seem like too small of a sample size, but it has proven to be a reliable guide.

Why SAP Needs to Continually Pivot to New Subjects

It is not only SAP consulting companies that have a very low accuracy regarding SAP, but the vast majority of SAP consultants individually. And if the pressure were to come from their employer, I would estimate the vast majority would say anything. People tend to bend to pressure very quickly protect their jobs. It must be understood that Deloitte, Accenture, Infosys partners are continually instructing their employees to lie.

The phrasing is the following:

“If the clients thinks A, then we won’t get the follow-on business, so you have to tell them B.”

So it’s not stated as a lie. It is indicated as something necessary to meet a goal. Therefore, here the person getting you to lie, lies in how they frame you telling a lie so that you see it as lying for the benefit of a “team.” That is you don’t want to let the team down and not allow it to accomplish its objectives.

People that make false statements must always be in motion, never providing any evidence for any of the statements but sort of like a shark, continually proposing new things to pivot or transition away from the old thing. I noticed this with such prevalence in my debates on HANA that I outlined the strategy in the following article called How to Deflect That You Were Wrong About HANA.

HANA is an intriguing story because it shows that with enough marketing, a product can be sold entirely based upon false information. SAP had to lie so aggressively to push out existing databases. It has had to rig benchmarks because nothing of what SAP claimed about HANA’s performance could be proven in reality as we covered in The Hidden Issue With the SD Benchmarks.

It is essential to consider that, like VW, SAP told everyone that “you did not understand our technology” when told their proposals were not feasible. For example, the idea of loading all data into memory is illogical. Moreover, SAP further has proposed that Big Data can also be loaded into memory — which is not going to happen, and at HANA’s pricing, it is never going to happen.

This description provided by SAP regarding tiered warm data is an attempt to reset the expectations of HANA, but without being caught for lying. This is why they had to create a whole new way of describing how the data is managed and stays far away from memory optimization.