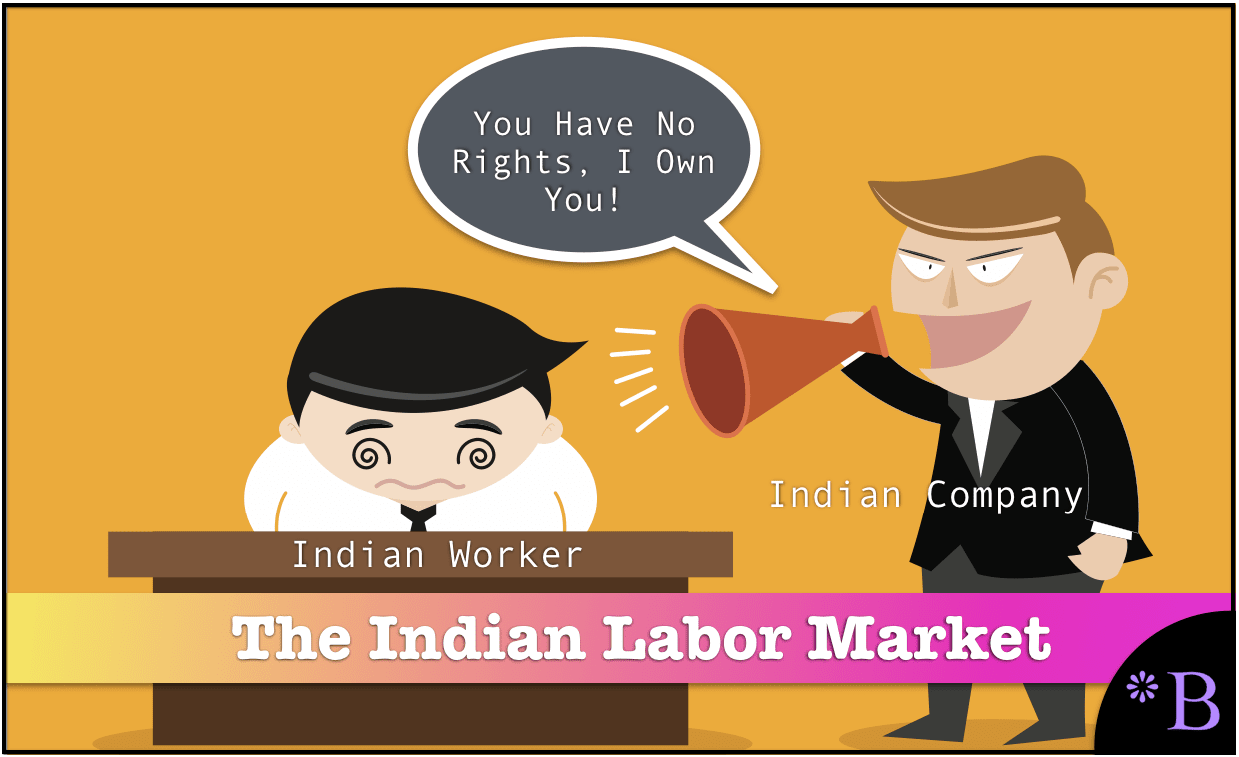 Indians have had a profound effect on the US IT labor market. In many companies, recent Indian immigrants represent at least 1/2 of the employees. The demographics and continued H1-B immigration, along with the higher average age of domestic workers in these IT departments, clearly show that this influence will only grow. Indians have also decimated the domestic IT recruiters pushing out domestic IT recruiters from their professions, which means that Indians are highly influential in many domestic workers’ employment. What you will learn from this article is how this rapid transformation negatively impacts IT workers as the employment laws and norms in India that are now being imported from India and what it means.

If at any time you want to see our references for this article and also other Brightwork related articles see this link.

Labor law is different in India. Employees in India are almost indentured.

Indian employees are expected to give notice of around 30-90 days. If they don’t, they may not get their “letter of experience” that proves their past employment, and may also be sued for monetary damages.

The Right to Leave in India

Furthermore, the employee does not necessarily have the right to leave until the company has agreed that they may go. This is covered in the following quotation.

Furthermore, there is a situation where the company can simply refuse to provide the relieving letter. This could be withheld in the short term (to simply keep the employee as long as they are needed for whatever they are working on) or long term to prevent movement. It is unclear how frequently this occurs. Furthermore, not providing the relieving letter can terminate the offer.

If you don’t have the most recent relieving letter, there are greater chances of job application being dropped, regardless if you are a potential candidate or not. The employer has no way to know whether or not you have been relieved from your last assignment and that there are no pending engagements with your last employer. – Stack Exchange

The system in India is so employer controlled that employees face legal liability if they leave without observing the notice period.

You can leave without serving the notice period only if you take the option of a notice-period buyout. If you leave your employment without giving any notice, then it’s technically a breach of the employment contract and can potentially land you in legal trouble.

If you join your company’s business rival without a serving your notice period  or a notice period buyout, your employer can sue you in the court of law and restrain you from working for their rival, at least for the duration of the notice. Depending on your terms of employment, you can even be stopped from working for the rival. (However, an organization will go to such lengths only if you a really valuable asset to the company.) – Hrishi Blog Buddhi

The India based blog where this quotation originates considers the labor law as entirely reasonable, as is illustrated by the following excerpt.

Don’t ever attempt such an act. It will prove to be highly or fatally damaging blow to your career! Reputed organizations with a good work ethic and policies in place use the notice period to process your resignation and find a replacement for you. If required, you can negotiate with HR to have your notice period reduced. Optionally, you can use your unutilized leaves to reduce the notice period duration.

Most mid to large size organizations conduct a thorough third-party background check of their new employees. Their HR will contact your previous employer to ascertain whether you were part of that organization for the duration you mentioned in your documents. If you have left without serving or buying out your notice period, your ‘AWOL’ status will be intimated to them and you can then say ‘bye-bye’ to your potential new job. No reputed company will ever induct a willful ‘AWOL’ employee into their ranks. – Hrishi Blog Buddhi

Indian (and US) IT Firms in India

In India, the banking and IT sectors are infamous for making their employees serve long notice periods. Depending on their respective experience levels, employees have to serve varying lengths of the notice periods.

The giants in the IT sector, (Tata Consultancy Services, Wipro, Capgemini, Infosys, Tech Mahindra, Cognizant, IBM, HCL etc.) have adopted long notice periods as part of their employment policies and set off the trend of long notice periods that has permeated into other industry sectors. – Hrishi Blog Buddhi

Notice that CapGemini and IBM is a US-based company. However, Capgemini and IBM (which is now more Indian than American) enforce Indian employment standards.

How Indians Are Negatively Impacting US Domestic Workers

Indians do not leave their horrific employment system in India when they immigrate to other countries. The following is the experience of an American working for Indians.

I have an undergrad from an Ivy League school and a Master’s from one of the top-5 technical universities in the US. I can complete a technical project in a week that would take a whole team a month.

For personal reasons I had to move abroad and outsourced for a while. Which meant Indians. These were small operations jumping from technical project to technical project, with very little success, but we’re micro-funded by friends of friends. They did a great pitch, that we would make a lot of money together, etc. and I decided to buy it. Idiot that I was. I’m a white American.

The first projects were just low-level stuff and they paid on time, no problem. But this was the bait. As we moved deeper into the relationship, there were more challenging projects. In the first one, they cut the price in half midway through and it took three months longer than planned. Mostly delay in payment and approval process, so I wrote it off as just inefficiency, which you have to tolerate in non-Western contexts.

The second project was a lot more ambitious. I asked for an initial fee, which was cut by 1/3rd in exchange for 20% of future sales. Except, every time I got something done, the “manager” asked for more, and more, and more, with no end in sight. He realized he had a competent programmer on his hands and he squeezed out every drop. (emphasis added)

See, one trick they do when they have someone competent is that they take as much of their work as they can. They are aware that many of the people they hire from nepotism are useless. Every time I asked for information from him (API documentation, meetings with other people, web dev support), he would just say “sure” and not do anything. Literally nothing. Finally the guy above him, when I presented the product and everything it could do, started yelling at me I controllably for not scheduling a meeting. I told him I had been waiting too months for this meeting, and he just hung up. Later, the manager asked if I would finish the project, and I told him I could not without the resources he promised. That was the end of it. 4-5 months of hard-driving code to get a temper tantrum and no pay.

The manager also obsessively corrected the wording of my documentation (always a bad sign, meaning he didn’t know what else to criticize me for) for several weeks. Just busywork.

Here’s the thing though.

The manager didn’t know how to get into GitHub when I offered him access. So they didn’t know how to get access to the work. When this boss finally contacted me 8 months later because he actually needed the product (my Indian clients always came back, whether they screwed me or not), he just offered cash – for a second version of the product. I insisted on payment for the original project.

My boss tried to sort of lease me out to some of his other buddies, but they didn’t even speak to me. I don’t like to play the discrimination card, but I think in this light there is no other reason. One did a “technical interview” where the “programmer” rambled non-stop about how everything I said was wrong – without allowing me to complete my answers. I later found out that he had loudly protested even having to review the CV of someone who was “so unqualified”. Protecting territory I suppose. Nothing scares one of these people more than a capable, well-educated white guy. I can’t imagine what it would be like if I was Asian or Black.

I still have some Indian friends – in a no -business context, they can be quite cordial and sweet. And I’ve worked with some very capable people from India. I like their intensity and argumentative passion. And when they truly know something, they *know* it. They remind me of Latin Americans, but with a dash of neurosis.

But I’m leaving IT. (emphasis added) There is so much corruption and fraud, so much deception and abuse, and so much contempt for work, and it has taken a toll on my emotional health. (emphasis added) Is this VC winner-takes-all culture, H1B culture, or the nature of a profession in which so much effort goes to waste? I cannot answer that. But I believe that a significant portion of the current tech bubble is fraudulent and will collapse in the next few years.

I have noticed a similar pattern with East Europeans, sadly. They can be very abusive to outsiders. I got put into a team of Russians for a few months, and they treated me not as a friend, but an infiltrator. After they got me to complete a business-critical project in a month, they fired me and gave credit to an East-European.

I am extremely tired of treading water, of doing my absolute best to add value to the company, and then getting ignored, threatened, or yelled at by people who claim to have doctorates but do not know basic English words like “parentheses”. I am also tired of the *Americans* who turn a blind eye to this behavior.(emphasis added) They genuinely seem not to care that IT is rotting from above and below.

There is no such thing as a genuinely multicultural environment. The dominant culture – and all its subtle assumptions – is the culture everyone has to abide by, and it’s usually the culture of the manager.

When the culture is non-Western, violating these unwritten rules is taken far more seriously than in the West. Russian culture punishes sticking out of the herd (even with good results) with extreme brutality. Indian culture just punishes people for not showing the proper respect to members of a “Master breed” who ruled a continent halfway across the world millennia ago.

This is not an unusual story. This can be considered to be the norm. In every case of comments that we receive, the pattern is the same from Indians. This has called us to question whether US domestic workers should be interacting with Indians, as we cover in the article Should You Talk to Indians?

This explains the background of Indians before coming to the US. For domestic workers that respond to Indian recruiters are a problem because Indians have a history of environments where labor has very little freedom or autonomy.

The more Indians control the recruiting market, the more they intend to chip away at the rights that already existed in the US. This is covered specifically in how Indian recruiters write their contracts in the article Contract Clauses to Watch Out for In Indian Professional Service Agreements.