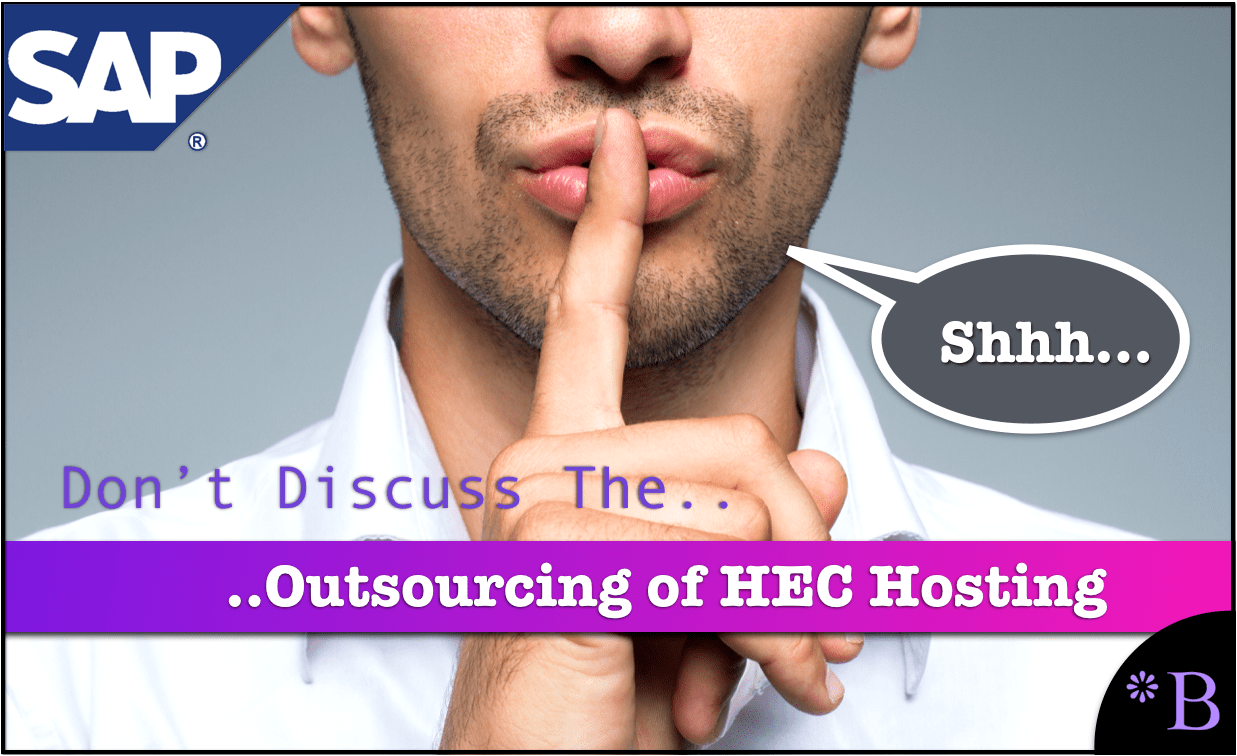 Video Introduction: How SAP Has Been Secretly Outsourcing Hosting

SAP has been posing as a cloud service provider like AWS or GCP. What is little discussed that SAP has been outsourcing the cloud contracts that it sells under the HANA Cloud Platform or HEC to its consulting and outsourcing partners. This fact is not shared with SAP customers who are lead to believe that they are receiving SAP provided cloud services. This is not what SAP customers believe they are buying when they purchase SAP Cloud. You will learn how SAP pretends its cloud is one thing and then provides a consulting firm data center, not cloud, to SAP customers.

Details on Faking the Cloud

The purpose of this article is not to announce anything but to get customers thinking about using more SAP cloud offerings. However, this is really a white flag of surrender. SAP has not been successful with its own cloud, and there are many reasons why. One is that SAP is not even interested in hosting. They outsource the hosting to companies like IBM, WiPro. All while pitching to Wall Street they are a big cloud company. How they do this is the subject of a future article.

However, IBM has been losing very significant data center business to AWS and to a lesser extent Azure. CSC, another dinosaur like IBM has been losing business to AWS and Azure in a similar fashion. I mean what I take from it is that SAP realizes their goose is cooked and their old strategy did not work. Even Salesforce now uses AWS. Evernote now hosts with Google. So it is demonstrating that the large scale economies of scale of companies that provide hosting.

What is explained in this article is not public information. SAP keeps a lid on this, and even the customers are not told. But what may be even more interesting than what SAP is doing is why they have been doing it. 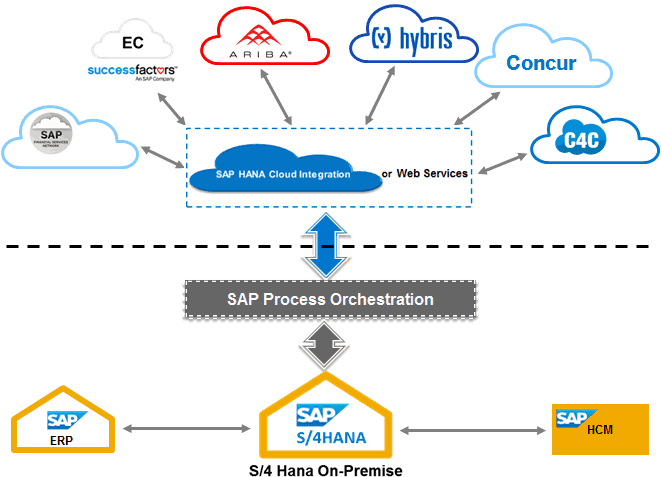 For years the vendors most dedicated to SaaS, vendors like Arena Solutions and SalesForce, hosted their applications.  Yet as the IaaS market has matured, that model is more being called into question. Even Salesforce, the largest SaaS vendor, recently began outsourcing its hosting to Amazon Web Services. Even for SAP, which tries to market that it hosts its applications heavily, many companies are now offering third-party hosting for SAP software.  Overall, it seems that SAP is not all that interested in providing hosting, which raises questions about how a vendor like SAP deals with third parties hosting their software.

The Evidence that SAP Has Been Secretly Outsourcing its Hosting

I learned that SAP sends out a hosting proposal to their consulting partners to perform the hosting. Interestingly, the customer is not even made aware that their hosting is not provided by SAP. It is laid out in the book SAP Nation 2.0 that SAP is not even interested in hosting. But one questions how much of this disinterest is based upon the traditional manufacturer/retail relationship. Under this relationship, a manufacturer must be careful not to upset its dealer network by offering its items directly to consumers. For instance, you cannot go directly to Ford to purchase a truck. It would certainly cost less to do so, and even if you are willing to drive the truck away from the factory location where the truck is produced, Ford still won’t sell it to you. It would help if you went through their dealer network.

As with on-premises software, SAP created this dealer network before the Internet was created. Previously, all communication was handled by the dealer. But now customers go to the Ford website to learn about the truck, but then place their order through the dealer, not through the Ford website. Dealers are, in fact, increasingly less of a source of information about cars for car buyers.

This is explained in the following quotation from the Economist on car dealers.

The internet was supposed to do away with all sorts of middlemen. Yet house sales are mostly conducted by estate agents, and car sales are still finalised in cavernous showrooms that smell of tyres. Technology is diminishing the role of car dealers, however. Customers are using the internet for much of the process of choosing a new car, and are increasingly getting loans and insurance online rather than buying them from the dealer who sells them their car. In many cases car buyers turn up having already decided which model and which options they require; and, having checked price-comparison websites, how much they will pay.

There were, in fact, legal bans that prevented automakers from circumventing dealers.

Two decades ago Ford and General Motors tried to revive this idea from the industry’s early days, but they were deterred by resistant dealers and restrictive laws in some American states. The legislation, enacted in the 1950s to protect dealers from onerous terms that carmakers were trying to impose on them, is now being used to put the brakes on Tesla. It has battled to open stores in several states where direct sales are banned or restricted (see diagram). And it is winning most of its fights. New Jersey and Maryland recently overturned bans, though the struggle continues in Arizona, Michigan, Texas, and West Virginia.

However, while the auto manufacturers may like to circumvent dealers if it were not for state laws encouraged through dealer lobbying, SAP’s situation is different. SAP is dependent upon its “dealer network” of consulting companies to recommend SAP. SAP tells Wall Steet and the world that customers pick SAP software because they think it is the best. That is far from the case. Instead, these consulting companies recommend SAP no matter the quality of alternatives because it is profit-maximizing for them. SAP consulting companies don’t generally care about the best software or what meets best with a client’s business requirements. They need to maximize their billable hours, and SAP allows them to do this. SAP is one of the few software vendors to outsource nearly all of their consulting to other consulting companies.

Of all software, SAP takes the longest to install and the most billable hours to implement and maintain. (See online calculation at Brightwork Research & Analysis.

Consulting companies will recommend SAP, adjust RFQs to match with what SAP can do, and generally tilt the playing field as much in SAP’s favor as possible. They, of course, admit to none of this and like to present themselves as looking out for their client’s interests. However, historically they have only kept either Oracle or SAP application consultants on staff (although this is slowly changing). SAP needs constant recommendations by its dealer network to maintain its position. Therefore it is of two minds on SaaS and Cloud.

Because of Wall Street’s pressure and somewhat from customers, SAP must continue to tout itself as a SaaS or Cloud vendor.

Because most of its software portfolio is still primarily on premises, and on-premises software has proven more effective at locking in accounts. This, combined with the fact that its dealer network makes money mainly implementing on-premises software, SAP either needs to keep selling on-premises software. Or SAP needs to bring in their consulting partners on hosting or risk losing their endorsement as they see themselves cut out of the revenues. And SAP knows the only reason the major consulting companies recommend them is that SAP “socks it to their partner’s pockets.”

The Uncompetitiveness of Consulting Company Hosting

SAP faces a problem when bringing its consulting partners into the hosting loop. And that none of them are competitive at it. If we take IBM and CSC, which have historically had the largest data center and hosting businesses, even these firms are rapidly losing market share to AWS. IBM and CSC are so dated in their offering versus AWS and Azure that this will continue. And all of the other consulting partners, like WiPro or Accenture, have even less ability to compete than having IBM and CSC. So SAP’s answer is to outsource to partners that have already lost to AWS.

Secondly, SAP has mostly given up its fight against AWS and Azure and has elected to make their SAP Cloud more compatible with AWS and Azure. I covered this topic in the article How to Best Understand SAP’s Multicloud Announcement.

SAP has been trying to have it both ways, as they have increased their hosted offerings. They want to project being Cloud to customers and Wall Street. They want to continue to enrich their consulting partners for whom they rely upon for recommendations against all reason to SAP customers. This is a textbook on why a company that has a basis in the previous era of technology is the wrong company to be the leader in a new technology era. They have too many arrangements to protect under the previous model, which worked spectacularly for SAP. But now, they are forced to pretend to be in a new era when their approaches are still based on the previous period.