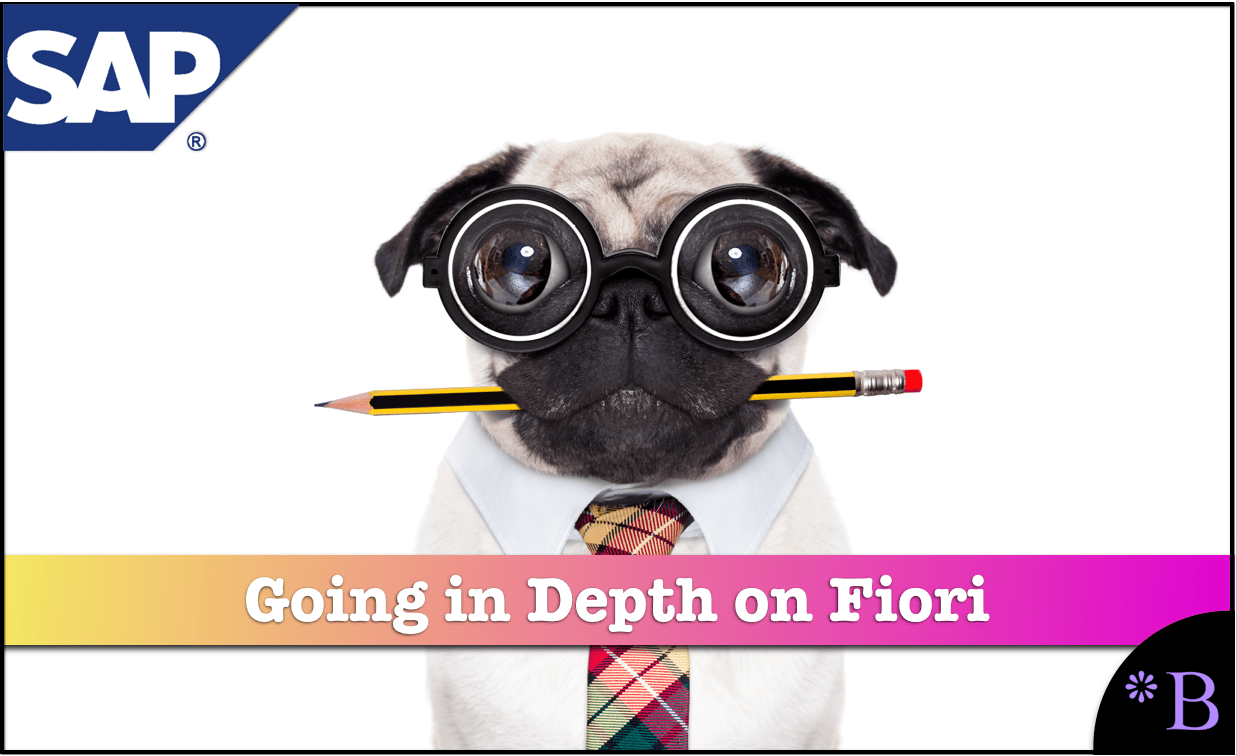 Introduction: The Reality of Fiori

SAP has made grand claims around Fiori, which have gone unchallenged in the marketplace. You will learn about our testing of Fiori and what the results mean for both SAP customers and for vendors that compete with SAP.

How the Normal Population Comes to Learn About the Fiori Client

SAP has spent so much time talking about how web-enabled Fiori client is for S/4HANA. It is worth mentioning how little in the way of research usability exist on Fiori.

If you look closely at what is primarily published about Fiori, it nearly always can be traced back to very positive statements by SAP. That is, the statement is either from SAP itself or from an SAP partner that is just repeating the information provided by SAP. That is, there is little to no actual analysis of Fiori’s capabilities outside of a promotional context. If you analyze some articles, the assumptions about Fiori’s usability are made, without ever being investigated.

The following quotation from TechTarget is a prime example of this.

“SAP exemplifies why and how ERP vendors are changing their attitude about usability. Over the years, many SAP customers have struggled with the ERP user experience and have either tried to work with or around the complex and monolithic applications as is, or poured resources into usability work performed in-house or by implementation partners.

And this is where Fiori — SAP’s new role-centered way of thinking about application design — comes in. Powered by a combination of SAPUI5 (its HTML5 user interface control library) and NetWeaver Gateway, Fiori applications aim to present an individual with the on-premises ERP information they need to execute routine tasks across a variety of devices.” – TechTarget

Research Based Conclusions or Repetition of SAP Marketing Messaging?

Notice how no research was required to write this paragraph. It merely holds out the assumption that Fiori will provide a better user experience. And where did the author get this information?

From observing Fiori at companies?

No (this article was written in March 2014 before Fiori was live much of anywhere). The assumption was given to TechTarget by SAP (which also pays TechTarget to capture sales leads).

Coverage after coverage on Fiori is the same type of unexamined assumptions.

The Real State of the Fiori Client

There are several things that we never see written about with Fiori, but that comes across very clearly in our Fiori testing.

This is not an exhaustive list, but a sampling of issues with Fiori that we don’t see given coverage.

This fact alone is a serious point of disadvantage for S/4HANA Cloud. There is no way we could see using only Fiori to do work. The S/4HANA Cloud functionality scope is small (so it can’t do the work for a company of any size in any case), and while S/4HANA On Premises has much more functionality, it has limited Fiori coverage. The bottom line is that companies presently are not using Fiori to do all or even most of their work in Fiori.

What the of the Fiori Client Testing Means

All of this plays out differently depending upon who you are, and we have broken this down to SAP customers and to vendors that compete with SAP.

Customers have more to lose by moving to Fiori than staying with SAPGUI. This is, of course, the exact opposite of what SAP and their partners tell customers.

Comparatively, SAPGUI is not only far broader in scope. It is faster and easier to use. This means that even you a customer moves to Fiori for some transactions, it will be worse off than staying with SAPGUI for most transactions. Nowhere is that observation, or any observation regarding the realities of Fiori explained for companies.

Now there is one exception to this, which is reports. 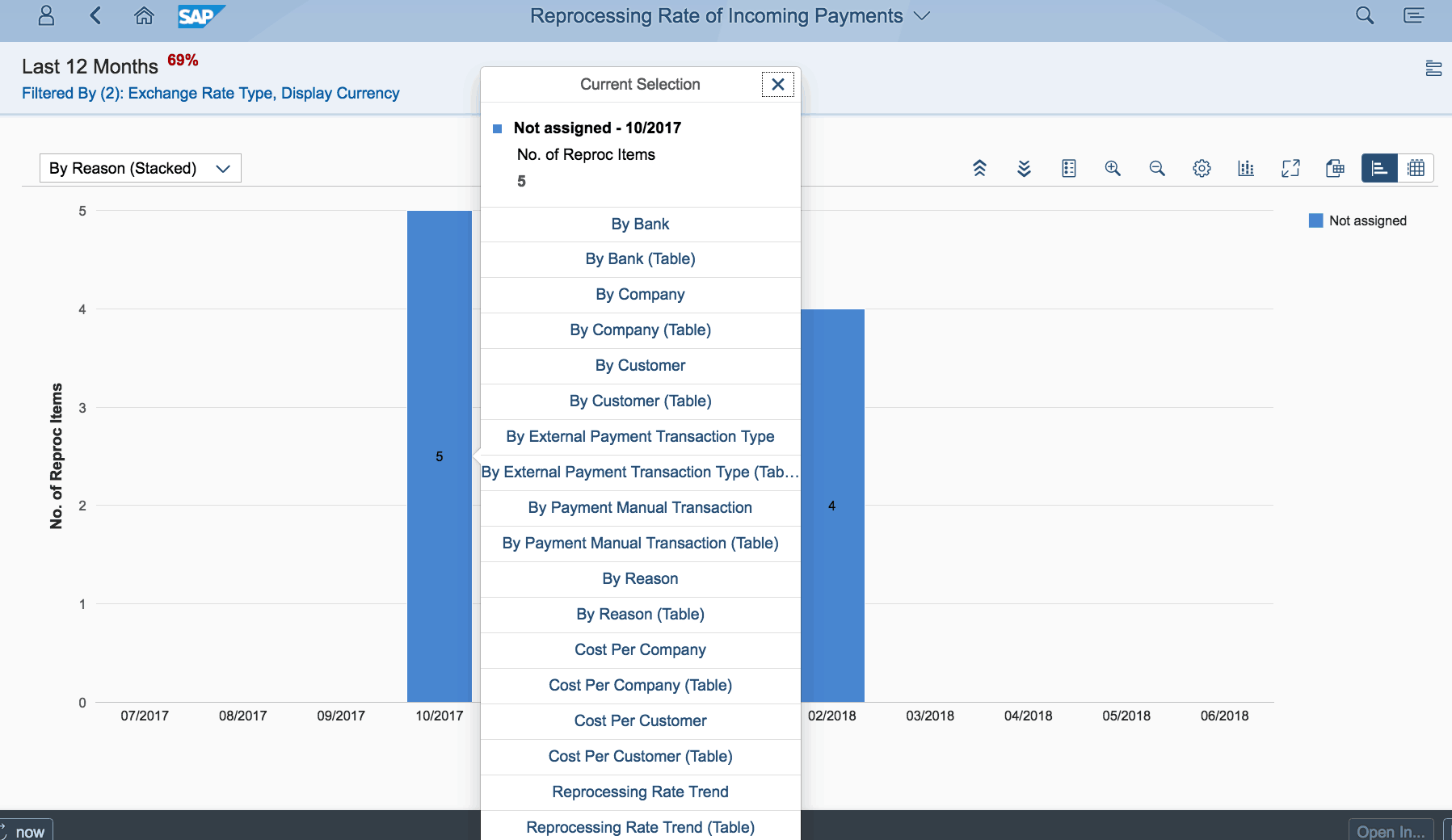 Fiori is really about reporting views. SAP has made a curious decision in S/4HANA by making so many transactions really just reports. This is particularly prevalent in the Accounts Receivable transactions or tiles in S/4HANA. With virtually all of them opening into a reporting screen. 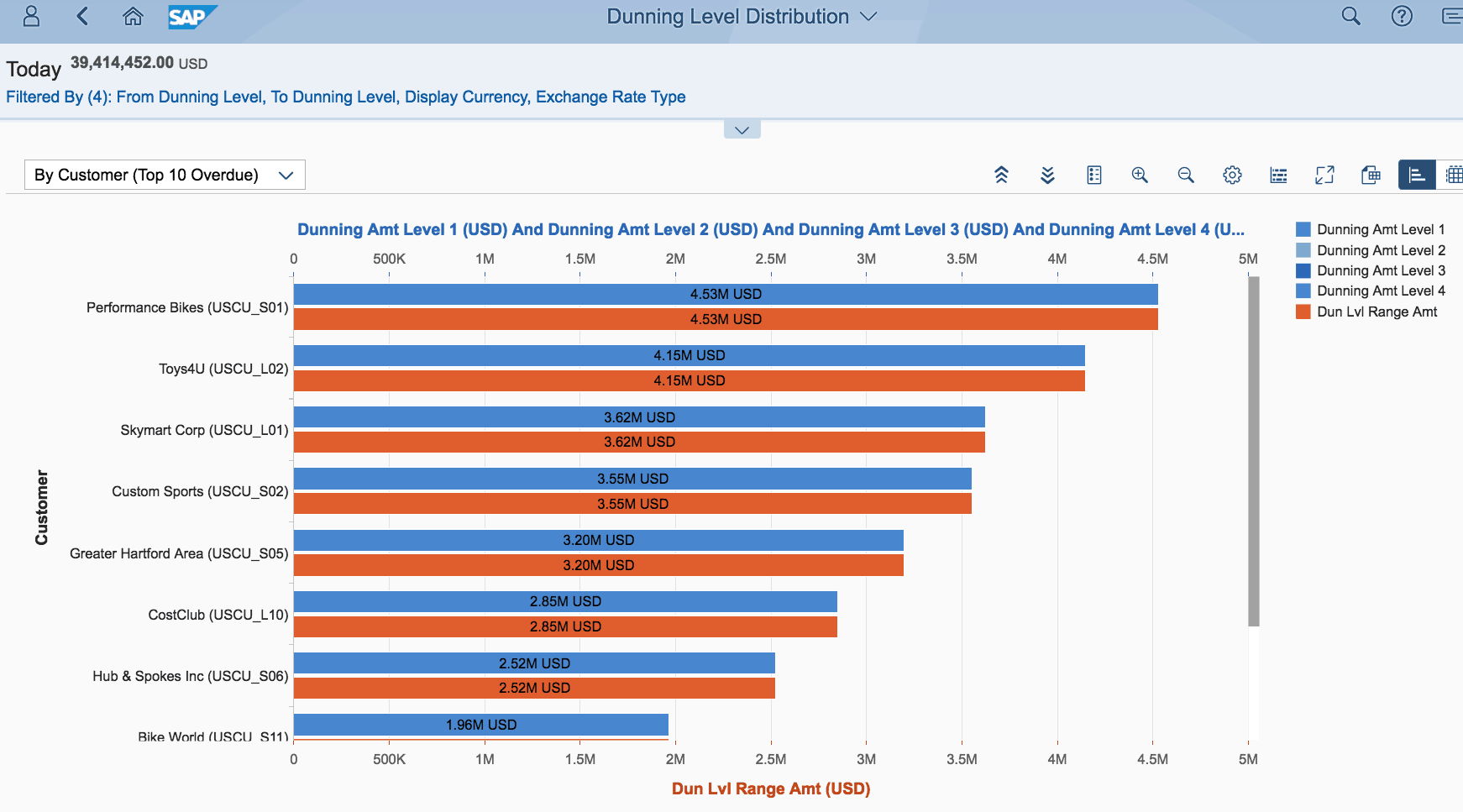 This type of report is not possible in SAPGUI. If one only relied upon Fiori for reports, one would be far ahead of the game versus trying to use Fiori to replace SAPGUI for non-reporting transactions.

Unless you read SAP’s marketing literature and attend SAP conferences (as we do), its difficult to comprehend how SAP exaggerates Fiori. We know how our testing differs from the flowery treatment that Fiori receives typically, but a reader was kind enough to send us a review listing. Here are how Fiori fares in reviews. 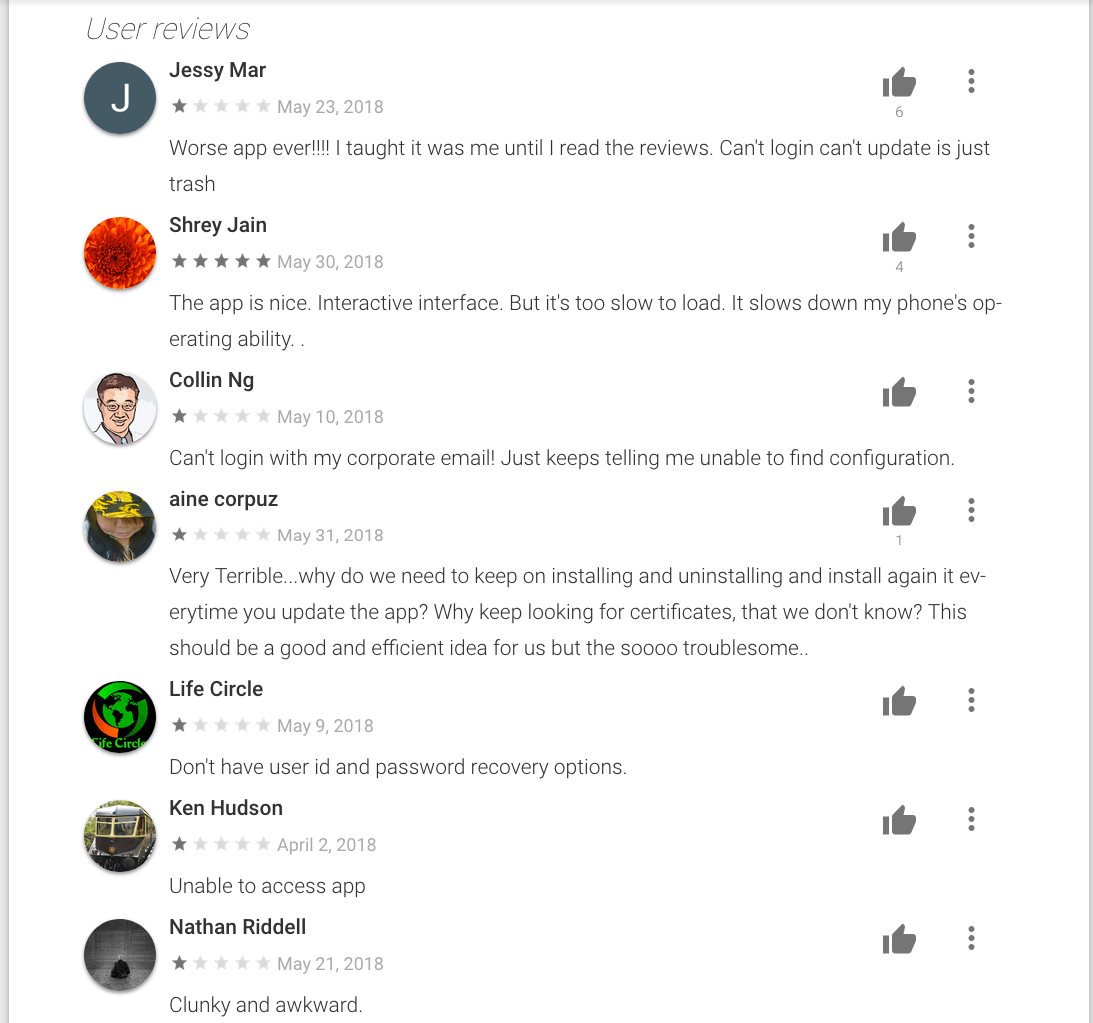 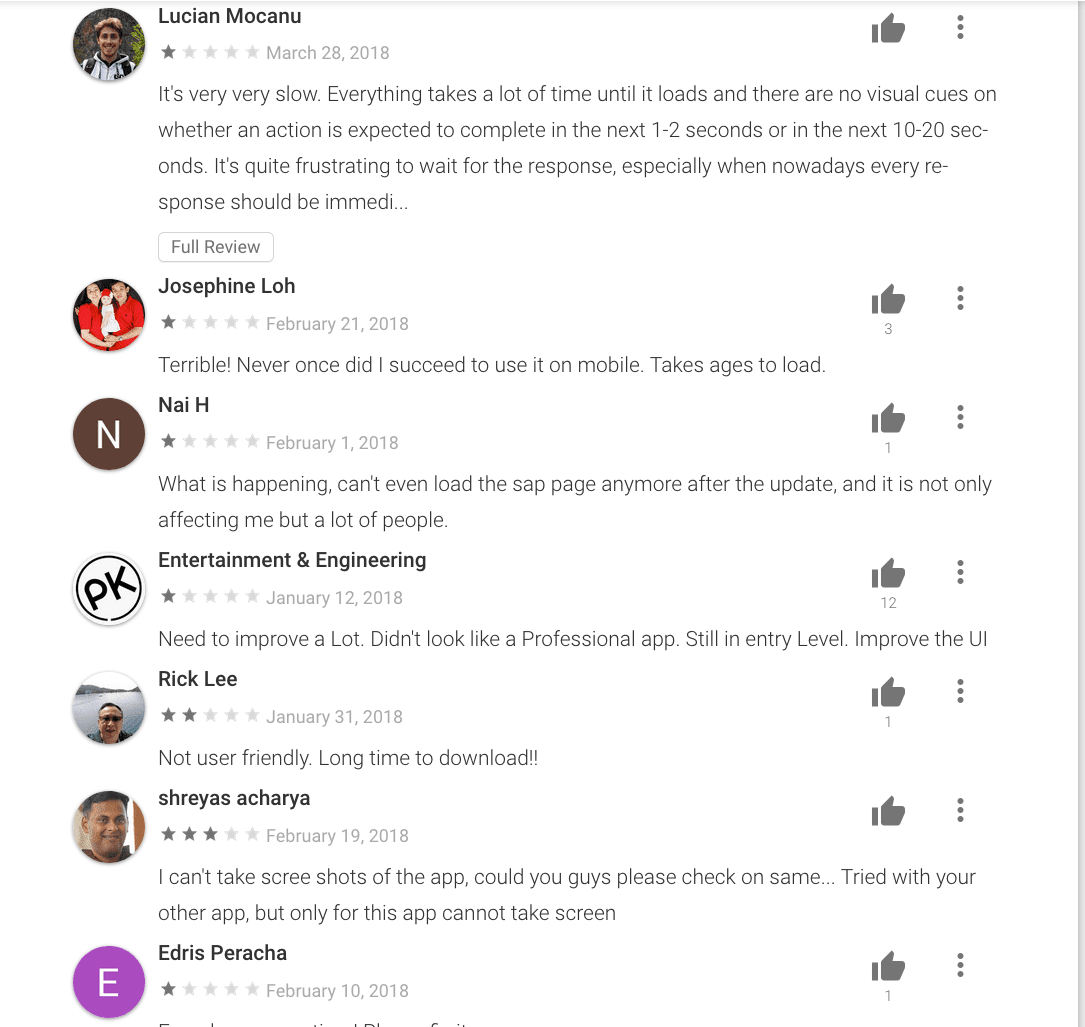 Hmmm..not so great. These reviews are placed on the Google App Store, meaning that SAP does not control them. If these reviews were left by Accenture or PwC, the reviews with being 5 stars! Every review would talk about how it might be the best UI ever developed. However, once SAP’s products leave the confines of the censored echo chamber, the world looks a bit different.

Notice also that these reviews are very recent. However, Fiori introduced over three years ago. When does Fiori become a usable UI? Why are there so many performance issues noted?

Competing vendors can use the very different way Fiori should be used and how much SAPGUI will be a long-term part of ECC against SAP. But to do so, it must demonstrate the ability to show Fiori to customers to cut through the marketing hype about Fiori and get down to the reality. Fiori is really about appearance. That is appearance over functionality. It makes a beautiful impression until you start to move past “looking at things” and start using the system.

Fiori is central to the future projection in the minds of customers and is being used to moderate against the desires of the business within many SAP customers to access non-SAP applications. Therefore all vendors that seek to compete with SAP need to understand and present the real story around Fiori. If the fantasyland version of Fiori is allowed to continue to be presented, then competing vendors lose. For example, at SAPPHIRE, not a single SAPGUI screen was visible. However, what do you see on SAP projects? SAPGUI.

Gaps In Understanding Around Fiori

There is a major gap in the understanding of Fiori in the market because so few actually use Fiori. (This gets into the massive overestimation of the implementation numbers of S/4HANA — both On Premises and Cloud, which we covered in the articles How SAP Controls Perceptions with Customer Numbers, and A Study into S/4HANA Implementations). And those that know the reality of Fiori are not going to share this information because they want to make money off of consulting.

We offer a Fiori analysis service for both SAP customers and for vendors that seek to compete with SAP, and this has lead to test Fiori. We have been testing Fiori in S/4HANA Cloud, to determine which parts of Fiori can be used for which activities. This testing gets into timing Fiori in different tasks and checking for functionality access versus the same functionality in ECC.

Because of our research, we can say with confidence that the way that SAP says that Fiori should and will be used is not how it will be used. Our confidence comes from the time we have put into testing Fiori and our background in testing a lot of applications. The differences become more apparent through this comparative analysis (see other application analyses at the Maintainability, Usability, Functionality, and Implementability (MUFI) ratings). It is important to remember that none of the information that is provided about Fiori in the press is based upon evidence, and nearly every party that reports on Fiori has an undeclared financial connection to SAP.

Listening to entities with biased financial is no way to find out what is true.

The outcome is that what SAP says Fiori is destined to have does not match with Fiori’s actual future. And we have always found it far more predictive to test SAP’s products rather than to trust what SAP says about their products.