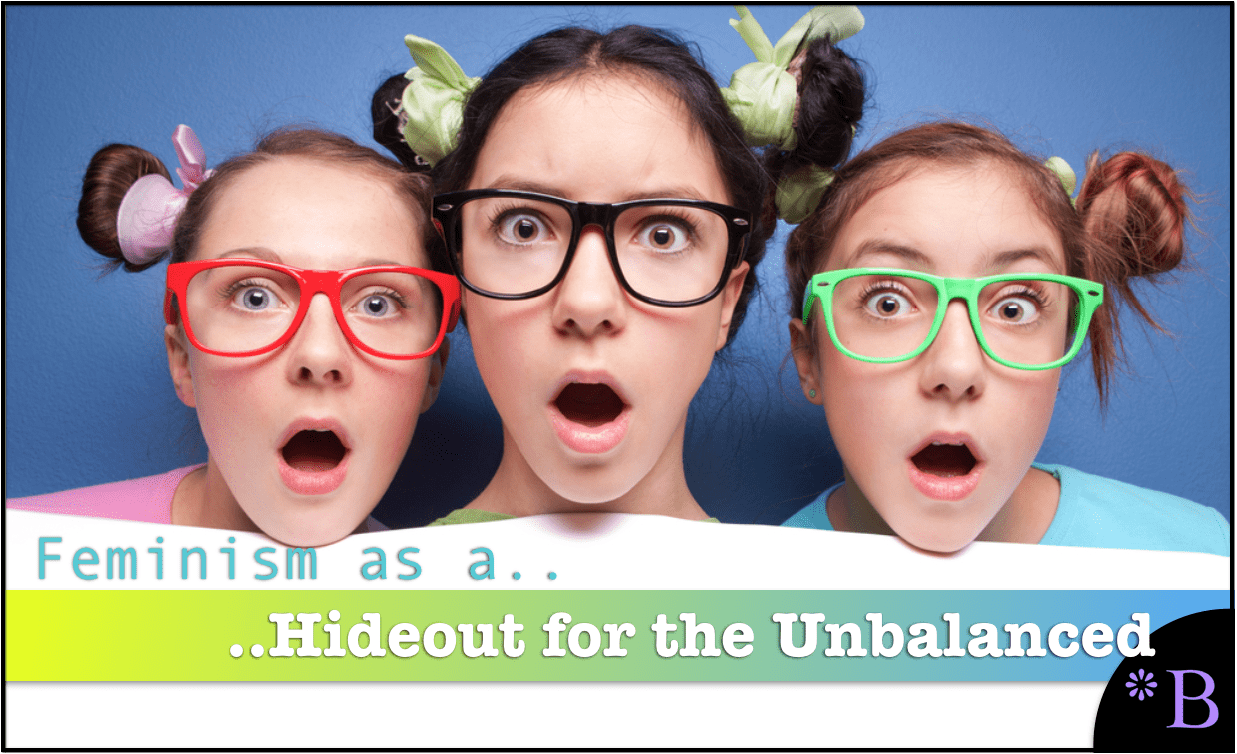 Feminism has a strong appeal for the most mentally unbalanced of women, and Feminism is also a shield for evidence-free proposals that advance women over men and children.

Why Do Western Feminists Defend Islam

One of the most curious and telling aspects of feminism is that it defense Islam while critiquing western men. As Islamic societies have the worst outcomes for women, this demonstrates an apparent lack of thinking on the part of feminists. However, the following anonymous comment partially explains why this is the case.

An age old quote I don’t know who originally said it is: “The enemy of my enemy is my friend.” Feminists aren’t really into Shariah or neither they care about Islamic fundamental laws. They like it because it’s the opposite of what they don’t like.

Feminists aren’t really into Shariah, or neither they care about fundamental Islamic laws. They like it because it’s the opposite of what they don’t like, which is white men. Feminists are also quite PC, and under the PC rules, one is not allowed to critique societies that are not white.

Feminists are, in general, very confused on many topics. For example, feminists want pay equality with men — but the point they miss is that women do not like men who have equivalent or lower financial resources than they do. Therefore, the closer women obtain pay equality with men.

Feminists have in western countries for the same numbers of hours and work experience, which feminists continually lie about.

And the fewer families will form. Unless a woman can obtain a financial subsidy from men, they often prefer not to be around them. A significant appeal of men to women is the financial resources they can provide to them. Once this declines, the attraction that women have for men declines. Feminists never seem to contemplate how their policies will affect families or children. Feminists also have very little empathy for men but expect empathy in return.

This is particularly true as feminists have also undermined the role of men in the family, presenting a fantasy that women are really the only thing necessary to raise children. This is clear in the presentation by BLM, which was founded by three lesbian feminists, who consider “families” to be “women, children, and the community” and leave men out of the equation entirely. I cover this topic in the article A Future Design for a Post Nuclear Family Society.

Overall, feminists not only seem to know nothing about Islam, but they also know nothing about the research that has shown for decades that single-parent households (which are nearly always led by women) lead to far worse outcomes than two-parent households. Feminists consider it was insulting to women to promote the idea that women need men. As Gloria Steinem once said,

A woman needs a man like a fish needs a bicycle.

It has been the established pattern of feminists to denigrate men and their roles as much as possible, and they do this under the false claim that the only thing feminism is about is “equality.” While western feminists are very comfortable undermining western men, they are far less comfortable critiquing Islamic men. I cover this strange topic in the article Are Feminists Right that Islam and Sharia Can be Used to Help Fight the Patriarchy.

And in this article How Big Tough Raging Feminists Are Absolute Cowards in the Face of Islam.

As the western feminist ignorance level of Islam is so high, they are easily manipulated by female Muslims who lie to them about Islam, as I cover in the article Is Islam the Most Pro-Woman and Pro Female of All Religions?

The most aggressive feminists tend to be mentally imbalanced. Just review the following video.

As is typical with feminists, these women have no idea what they are talking about. Feminists give mentally imbalanced and self-centered license to believe and propose any self-serving concept without being asked to provide evidence. Interviews with feminists can be used as recruiting videos to convert people to Islam.

Feminists won’t hesitate to re-define Islamic Shariah laws just like what they did to Christianity. I find it funny how gender dynamics works. I’m from a Muslim country, and modern muslim girls plainly hate Shariah Laws, but they’re not overt about it. They like to date western guys if they’re not residing in their home country. Coming from a hardcore conservative society, they enjoy the liberalism western culture provides.

This comment is quite interesting. I was unaware of feminists redefining Christianity, and I thought that feminists worked within a primarily secular framework to make their changes. However, this is never observed by western feminists.

Feminists Get Confused on Elitism

Feminists became very enthused about the Me Too movement. However, they appear to have missed the point that the men harassing were powerful. Overly concentrated power affects all people, men included. Feminists put all the blame on men, not on concentrated power. This demonstrates inferior thinking skills, which are the hallmark of feminists. And as soon as the sexual harassment claims began to come against men who were Democrats, like Andrew Cuomo and Joe Biden, very quickly, the Me Too movement ran out of steam. It is so much easier to become enthusiastic about sexual harassment claims against one’s political opponents.

This is one example, but there are so many. Feminists live in a world of double standards, that they think is ok, as they can’t be critiqued…because they are feminists.

The insanity of feminism moves into censoring people who are not on board with transgenders. Feminism increasingly appears to be a type of groupthink that imposes ridiculous beliefs on its followers and which cannot be questioned. Feminist studies departments are very similar to African American studies departments in universities in that they are not actually academic. They make assertions, and then anyone that disagrees with the assertions is sexist or racist.

Feminism has helped lead to proposing that there are 100 genders. If this is disagreed with, you are considered a retrograde bigot.

Being a self-declared feminist is a strong indication of either mental illness or being mentally unbalanced. Feminists are also highly self-centered and never seem willing to admit how their views are simply wrapped around their self-interest. Their reaction to Islam, which is very harmful to women but unaddressed by feminists, and their hypocritical position on Me Too, are examples of how discombobulated the movement and the thinking within the movement is. Feminists should be given a wide berth.