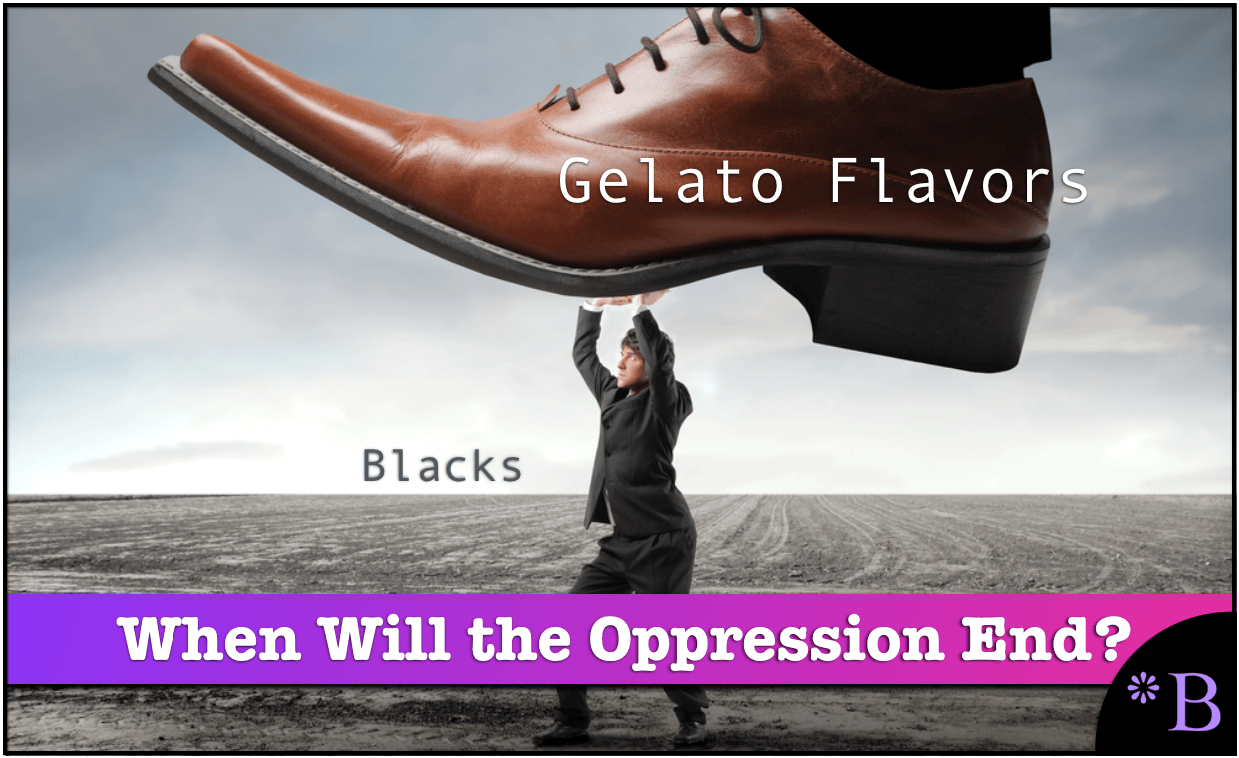 The following was a gelato that was produced for a short period of time before black advocates began to complain. 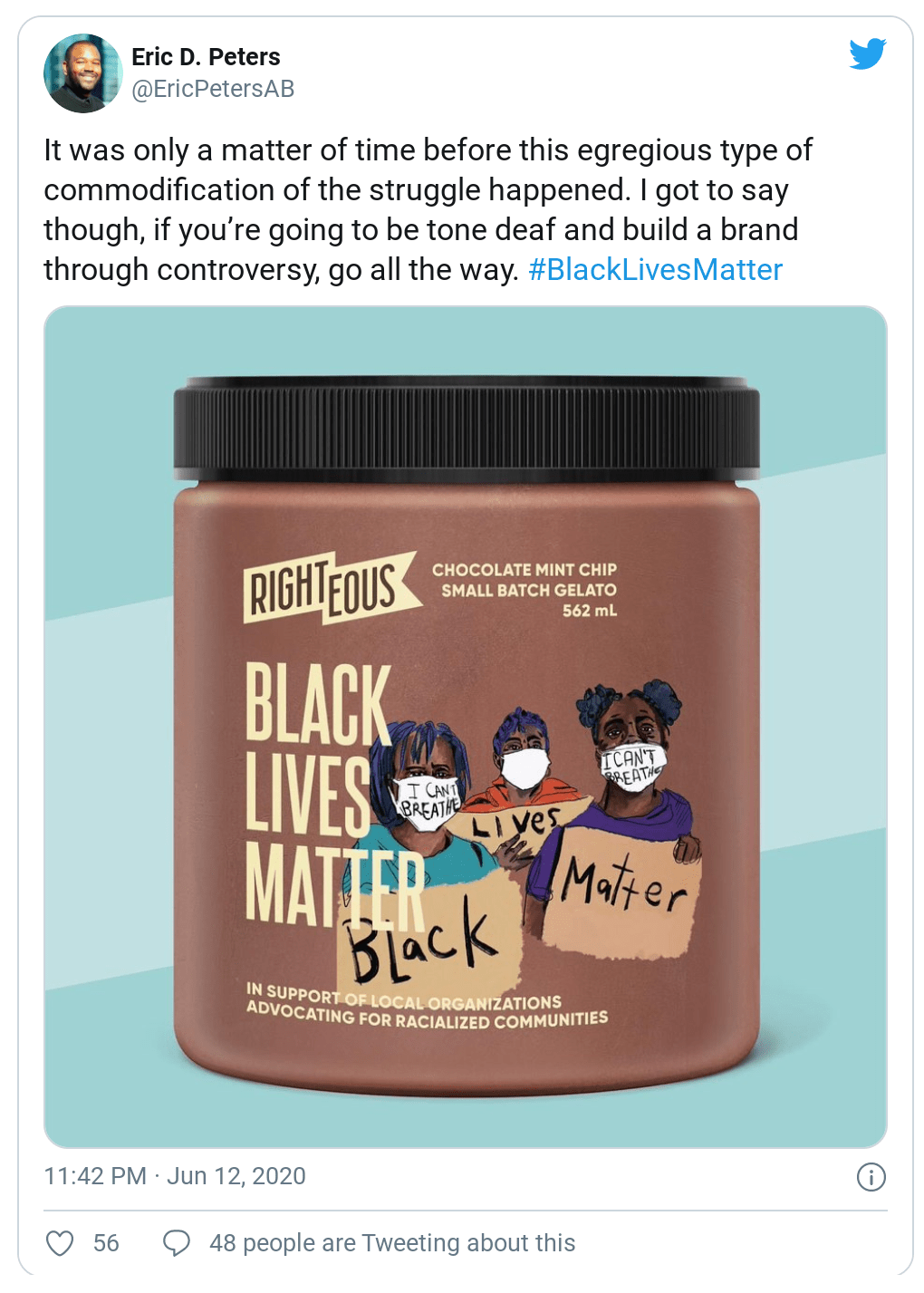 Far from this being considered amusing, it was interpreted by some black spokesman as oppression.

“You cannot just take a Black person’s issue that does not affect you then capitalize on it,” Adora Nwofor, a Black Lives Matter activist in Calgary, told CTV. “This is part of our oppression.”

Interestingly, what was not discussed is that the BLM Gelatto was part of the company’s program to raise money for diversity.

In social media posts that have since been deleted, the company said $5 from every jar of the chocolate mint chip flavour would be donated to “support efforts to combat systemic racism and advocate for radicalized and marginalized communities.”

Was the Artist Also a Racist?

Another problem was that a non-person of color created the design for the gelato.

What was her motivation?

Was she a racist?

Why did she want to do the design of something as she was not herself black?

These are questions we just don’t know the answer to, but like most of the media, we are happy to make baseless insinuations towards. Who else but a closeted Nazi/white supremacist would design a label for a gelato whose proceeds go to supporting the black community?

Should white artists be allowed to draw pictures of blacks, or are we moving into a Muslim situation where depictions of Mohammed lead to a death sentence?

Monty Python explained very clearly when a person should be stoned to death for saying Jehovah. BLM/black advocates seem to be moving us back in time. If John Cleese were to say N*****, today this would have a similar outcome as this Monty Python parody.

It would not be a real stoning, but a social media stoning and canceling.

And there are more similarities than one might initially see upon first viewing. This is because the priest, in this case, does have the right to say Jehovah or N***** and not be stoned. However, other people may not use the term Jehovah or N******.

The word N***** is highly offensive — unless it is used by blacks, in which case it is one of the most commonly used words in the black vernacular.

In a world where black videos like this are common, the concern of many black activists is the introduction of new supportive gelato flavors.

Just look at the white supremacy dripping off of that Vanilla Bean!

I can’t even look at it without getting flashbacks to the 1936 Nurenberg Rally.

Did you know that Hitler used to eat vanilla ice cream?

Did More Blacks Want to be Involved in the Creation of the BLM Gelato?

“Unfortunately a lot of individuals are still struggling and suffering, and if we want to create an inclusive society for all Canadians, we need all citizens to be involved to be part of the solution.” – CTV News

This is a little confusing, as it appears involvement from the black community would have led to the same outcome (selling a BLM Gelatto with a design and giving the proceeds to diversity programs).

Is the black community angry about the outcome of the project — showing solidarity and charity from the Black Lives Matter movement, or the fact they were not involved? Because if you are faking outrage to get brownie points, and you just wanted to profit from BLM gelato personally, then this is hypocrisy to critique the gelato on the grounds of some illusory principle or that the introduction of a new gelato has oppressed you.

*Please excuse the use of the term brownie points. It was racially insensitive of this author to use such racially charged language. The punishment of the author will be determined at a later date.

Was Chocolate Was an Ignorant Flavor to Choose?

The statement also said the company should have included organizations doing specific work with the Black community, it should have chosen a Black artist and the choice of chocolate as a flavour was “ignorant.” – CTV News

Are blacks or black advocates experts in what flavor of ice cream blacks taste like?

What ice cream flavor do whites taste like? Is it vanilla? Wouldn’t once choose vanilla for whites as whites are…well white?

Or is that ignorant also? What qualifies as schooled or learned in the area of human ice cream flavors? Is there a cookbook one can purchase to become properly edified?

Notice how the black advocates that pointed out the oppression of the BLM gelato explain what we can do.

To those looking to take a stand against racism, Nwofor had a simple message.

Should We Listen to Black People?

I listen to black people all the time. I have black presenters on YouTube videos that do movie reviews I like to watch. I like to watch Henry Louis Gates Jr, as he is an expert on historical slavery. However, I am not sure this is what the assertion “listening to black people” actually means.

“Listening to black people” appears to be a euphemism for agreeing with black people. Typically the issue is not listening; it is agreeing. And it is dishonest to ask for one to listen to you, when you actually mean not to question your assertions. This is a very underhanded way of eliminating dissenting views. If the listener disagrees with the spokesperson, then the listener can be accused of “not listening.”

Let us ask this question also. Are black people (and remember, this is ALL black people, as the phrase is “listen to black people” always right on all topics such that it is required that everyone agrees with them?

It seems like we already went through this with the phrase..

..then when it was not convenient, for instance, when the nominee for the Democrat presidential candidate — Joe Biden was accused of sexual harassment,

..seemed to get thrown out the window.

Based upon what Harvey Weinstein did, for a time, we were encouraged to “believe women.” These shirts were selling like hotcakes for a time.

Are black advocates now attempting to extend this rule of thumb to now apply to all black people?

This appears to be the case.

Who do we believe in that case?

If we, for instance, listen to black people on the claims around BLM, as we cover in the article Black Lives Matter as a Scam Organization, we would only take in large quantities of false information.

Notice this piece of mind control published by Psychology Today about how non-blacks should prepare their mind to participate in black protests.

Still, you can make progress on your humility. Wouldn’t that be important right now?

Listen to protesters, listen to Black leaders. Close your eyes and really listen. Then…

Empathize and try to feel what others are feeling.

Try to deeply understand the other person’s experience.

Use your zest to get fired up for what’s right — and far more challenging, the perseverance to stick with it!

Speak against injustice and deep-seated unfairness.

Elevate the voices of the disenfranchised, the quiet ones, the invisible ones.

Gain new perspectives, understandings, and insights about others.

Use emotional intelligence to try to understand the feelings and day-to-day mindset of others.

Psychology Today should know that constantly repeating a mantra in this way is a technique used by cults to enforce conformity. (Recall, the chant “Hare Krishna”).

Why Psychology Today would be proposing a mind-control technique to its readers is quite strange. Is Psychology Today about presenting insights from the scientific study of the mind, or are they providing mind control short cuts to the general population?

How about a scientific approach of listening to claims — and then researching the claim to determine if it is true? This requires no incantation and is necessary to determine if claims have evidence to support them. Because currently, many claims are being made by Black Lives Matter, and they are false, and they are not being checked for accuracy in the establishment media.

Humility is not as much of a tool in this regard as is validating accuracy.

Secondly, teaching humility makes the person more willing to accept evidence-free claims. Humility places the message receiver in a passive role, whereas they need to be in an active role to keep from accepting false claims. No person has the right to have their assertions received with humility unless they have demonstrated track records of being correct and or if they have established domain expertise in the specific area being discussed.

According to a number of black advocates, the Calgary based Righteous Gelato company oppressed them by introducing this new gelato flavor and doing so without their input. They claimed that the new gelator flavor was oppressive, should not have been chocolate (black people don’t taste like chocolate) and continued the oppression of black people, this time, perhaps the first time in human history, the oppression came through the introduction of a confectionary item.

The claims are curious as they bounce between being highly offended by the gelato but wanting to be more included in the new gelato’s introduction. It all comes off as quite insincere. And one wonders how much of the outrage is designed to get media attention, and therefore how much it is manufactured.

Black outrage groups are increasingly looking like grifters that specialize in being professionally outraged.

And one of their first orders of business is to police the introduction of new gelato flavors by companies that seek to sell products to raise money to help the black community.