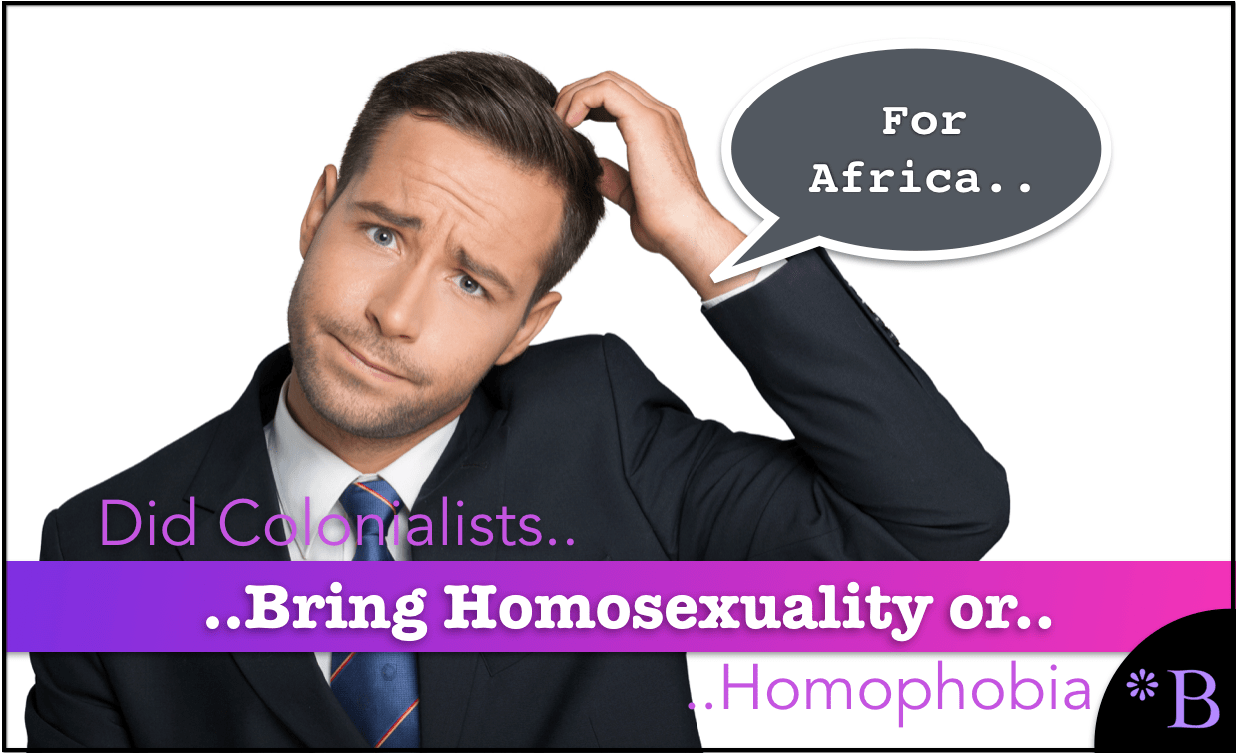 Homosexuality is commonly actively discriminated against in black societies. This is true of blacks in Western countries but is particularly aggressive in black managed countries.

The president of Zimbabwe blamed African homosexuality on colonialists. These quotes are illustrative.

Robert Mugabe had just made a furious speech against Zimbabwe’s LGBT community, calling them “worse than pigs and dogs.”

As he was about to get into his limousine, I asked, “Are you saying that gays in Zimbabwe have no legal rights?”

He glared at me and responded irately: “They have no rights whatsoever! They are an abomination and against human nature and God,” he shouted. He grabbed my arm and jostled me, causing my head to knock against a video camera behind. – AP

Mugabe was very anti-colonialist and anti-white. And he is offended by white countries telling him to improve gay rights in Zimbabwe.

Colonialists are often accused of bringing homosexuality to Africa. Yet they never get attributed with a likelier anthropological truth: introducing penal codes to the continent that outlaw gay sex. An irony that bypasses homophobic leaders such as Zimbabwe’s president, Robert Mugabe, is that anti-sodomy laws on their countries’ statute books were first designed and implemented by the former colonial powers now accused of exporting homosexuality. Should former colonial masters not rather be accused of teaching Africa how to codify homophobia? – The Guardian

Africa has 54 countries and more than a billion people. One of the most ridiculous myths about it is that homosexuality did not exist in the continent until white men imported it. Robert Mugabe is one such propagator, calling homosexuality “un-African” and a “white disease”.

Throughout history people everywhere have explored and experimented with their sexuality. The desire to do so has never been confined to particular geographical locations. Its reach is universal. Yet today the myth of a pre-colonial sexual innocence, or more fittingly, ignorance, is used to endorse anti-gay legislation and stir up homophobia and persecution in Africa. In my father’s country, Nigeria, a new law passed in January carries a 14-year prison sentence for same-sex marriage and up to 10 years for membership or promotion of gay groups. In Uganda, the Anti-Homosexuality Act can impose life imprisonment. Latter-day evangelicals from the US are partly to blame for this continuing persecution, but so are Africa’s political leaders such as presidents Yahya Jammeh of the Gambia and Yoweri Museveni of Uganda, who use rabble-rousing anti-gay rhetoric to increase their power base and popularity.

While much has been written about this dangerous turn of events, little has been written about its origins. Two trailblazing studies in the field – Boy Wives and Female Husbands edited by Stephen O Murray and Will Roscoe, and Heterosexual Africa? by Marc Epprecht – demolish the revisionist arguments about Africa’s sexual history. From the 16th century onwards, homosexuality has been recorded in Africa by European missionaries, adventurers and officials who used it to reinforce ideas of African societies in need of Christian cleansing.

The Portuguese were among the first Europeans to explore the continent. They noted the range of gender relations in African societies and referred to the “unnatural damnation” of male-to-male sex in Congo.(emphasis added) Andrew Battell, an English traveller in the 1590s, wrote this of the Imbangala of Angola: “They are beastly in their living, for they have men in women’s apparel, whom they keep among their wives.”

Transvestism occurred in many different places, including Madagascar and Ethiopia. Among the Pangwe people of present-day Cameroon and Gabon, homosexual intercourse was practised between males of all ages. It was believed to be a way to transmit wealth. The Nzima of Ghana had a tradition of adult men marrying each other, usually with an age difference of about 10 years.(emphasis added)

So it appears that, if anything, the Europeans brought more homophobia than homosexuality.

The following are comments on a video about homosexuality in Jamaica.

Comments on a Video on Homosexuality in Jamaica

Yeah, Jamaica is not a place for homosexuals. There are homosexuals there, but many don’t display it, if they are effeminate. It’s actually quite dangerous to do so. I’ve been throughout Jamaica several times and know the culture very well. I mean resort life is so different from the towns and smaller areas where they do not tolerate even effeminate behavior let alone homosexuality. It’s just always been that way. They carried it from Africa. It’s very intolerant over there too, even more so than Jamaica. And yes, there are gays, but you better hide it.

This next commenter then states that homophobia was imported to Africa.

Virulent homophobia is not from Africa. Enslaved Jamaicans and colonized Africans learned it from the British.

A petition to decriminalize sexual acts between people of the same sex was recently rejected by the Kenyan High Court. The litigation process was once again characterized by frequent references to “African culture.” One of the interested parties attached to the case was Irungu Kangata, the senator of Murang’a County whose interest in the petition was “to secure the diversity of Kenyan culture in their common rejection of homosexuality.” Kangata argued before the court that “none of the Kenyan communities or culture embraces homosexuality and that historically, homosexuality was punished through ostracization or death,” and that decriminalizing homosexuality would be “in breach of their right to preservation of their culture.” – Africa SA Country

In most cases, the issue is that African countries have passed their anti-gay legislation after the colonial period ended. If Europeans imported all African homophobia — then why was this new legislation passed? Botswana removed a British law against sodomy, but that is more of the exception.

In the US, blacks are, on average, far more anti-gay than the rest of the population. Gay rights in predominantly black countries in the Caribbean are again less accepting of gay rights than in the US.

It is far more accurate than Europeans brought anti-gay ideas to Africa. And the idea that Europeans brought homosexuality to a place it had not existed before (Africa) is false. However, the claim that these anti-gay attitudes and laws were stuck in stone after African countries obtained independence is not true.

Secondly, many African leaders are openly anti-gay and do not suffer political consequences for their position. Finally, anti-gay laws have — except for a few instances — become more punitive rather than less so since African independence.

In many parts of Africa, they hunt albinos to sever their limbs. These limbs are then used as religious trophies, etc. As of yet, Africans have not tried to blame this practice on colonialization. Severing the limbs of albinos for “good luck” is not a practice in white countries. But it’s important to be vigilant because it is likely that this will be blamed on colonialization.

We received feedback from some blacks that they did not like this article because it proposed that Africans were part of slavery — and they would like it if the focus of slavery is where it belongs, which is only on white participation. We cover this in the article How Making False and Selective Claims is Part of a Scam by Black Americans.