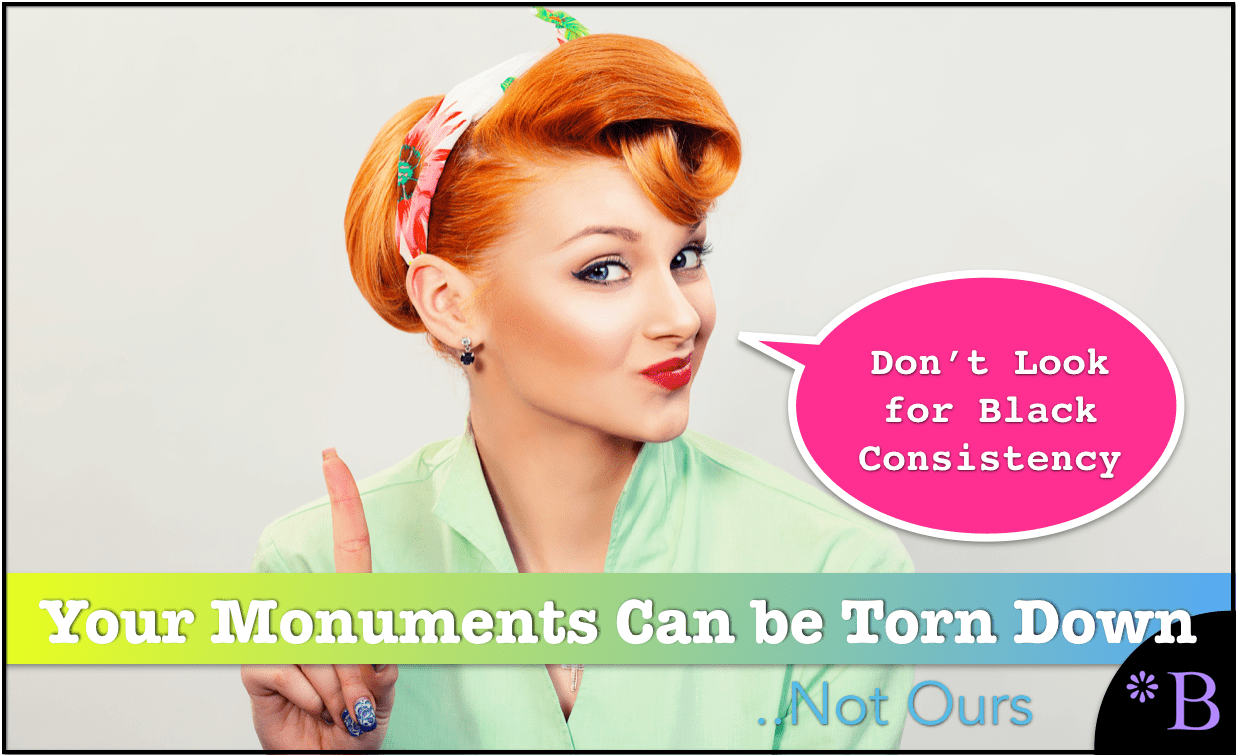 This video shows the statues torn down around the world.

Up until just recently, all of the statues that were torn down were of white men. There were very few calls on the parts of blacks to not tear down these statues. There were a few, but it certainly was the minority view among blacks.

Then a statue of Frederick Douglass, a black man, was torn down. It is interesting to juxtapose the non-concern on the part of blacks for white statues versus when a black statue was torn down.

See the following video on this topic.

This video shows the response from two black men involved with the statue to the statue being torn down.

“I hope the statue was not torn down as retaliation for the other statues being torn down.”

Something which is not generally considered by those that want to pull down monuments is that prior to the late 1700s, slavery was nearly universally common and accepted. (There was a case in 1722 where slavery was tested and rejected in a British court, but this view did not begin as a movement until roughly 60 years later). This was true of all societies on earth. Slavery was even more accepted in non-white countries, and in many countries, it is accepted to this day.

The first societies to spring up to oppose slavery were in the 1780s, but it took a while for the movement to pick up steam, and it was only questioned in white societies — starting with the Danish and the Dutch, then the English. The reduction of slavery was imposed by European and then American colonialization on non-white civilizations in Asia, Africa, and the Middle East. And it was resisted by these areas.

In 1807, the Act for the Abolishment of the Slave Trade was passed in England, and England not only passed the act but funded anti-slavery patrols off the coast of Africa. This act was designed to stop slave-trading — not slaves who had already been enslaved.

Important Dates in the Reduction of Slavery

Where Are Statues Being Torn Down?

The focus on tearing down statues only seems to be occurring primarily by non-whites in white countries. Statues have been torn down in both the US and the UK, even though the UK has little to do with policing in the US — and the practice has taken on a general anti-white dimension.

However, as I said, slavery was universal at this time.

This brings up the question of why statues of slaveholding individuals in non-white countries are not being torn down. That is, why have so many people been acculturated to think that slavery was a predominantly white institution?

Secondly, Brazil was the last country to outlaw slavery in 1888 – and this was only done due to pressure on the part of the US and the European powers. Are blacks in the US angry at why it took Brazil so long to outlaw slavery? In fact, it is not clear how many blacks even know that Brazil was involved in the Atlantic Slave Trade — much less receive the majority of slaves from the Atlantic Slave Trade.

Where are the monuments being toppled in these countries? If the issue is slaveholding — then shouldn’t all of the slave associated monuments be toppled? What about whites that did not hold slaves, because a number of those have been toppled as well.

One of the statues that were torn down was that of Ulysses S Grant. This is supposedly because (while he was the best-known general for the Union), he did own slaves. However, his slave ownership is not what it might appear to be, as the following quotation explains.

..it will come as a surprise to many people, that Grant did in fact own a man named William Jones for about a year on the eve of the Civil War. In 1859, Grant either bought or was given the 35-year-old Jones, who was in Grant’s service until he freed him before the start of the War.

While Grant’s views on slavery evolved over time, his relationship with slavery was complicated and demonstrates the pervasiveness of the institution in antebellum America. Grant’s father, Jesse, was an abolitionist who wrote for the Castigator, a newspaper in Ohio. However, his son’s attitudes toward slavery were more ambivalent, at least from what we can discern of his opinions before and during the Civil War. “I never was an abolitionist, Grant wrote to his friend and patron, Elihu Washburne, in 1863, “not even what could be called anti-slavery…”

In 1848 Grant married into the slaveholding family of Julia Dent. Her father, Frederick Dent, owned 30 enslaved people and had “given” Julia four enslaved people when she was a child: Eliza, Dan, Julia, and John. There is no evidence he legally transferred ownership to Julia but from her writings it is clear she considered them hers.

“The use of slaves on the farm…was a source of irritation and shame to Grant. Jefferson Sapington told me that he and Grant used to work in the fields with the blacks. He said with glee, ‘Grant was helpless when it came to making slaves work,’ and Mrs. Boggs corroborated this. ‘He was no hand to manage negroes,’she said. ‘He couldn’t force them to do anything. He wouldn’t whip them. He was too gentle and good tempered and besides he was not a slavery man.’”

It is notable that Grant did not sell or work out a plan with Jones to purchase his freedom, but simply freed him.

Grant may have been initially ambivalent to the institution of slavery but his wartime experiences showed him that it was morally and practically indefensible and that African Americans would not only make strong allies in defeating the Confederates, but respected citizens in the reunited nation to follow. As the 18th President of the reunited nation, he was an advocate and defender of the freedmen’s newly acquired rights, earning the admiration of Frederick Douglas, who believed, “To Grant more than any other man the Negro owes his enfranchisement.”

In his memoirs Grant wrote, “As time passes, people, even of the South, will begin to wonder how it was possible that their ancestors ever fought for or justified institutions which acknowledged the right of property in man.

Did the people that tore down Grant’s monument read the background of Grant’s “slave ownership?”

Given Grant’s actual relationship to slavery — and of course his position in the Union Army, it would seem that Grant’s statue should receive some type of “pass.”

But again, the abolishment movement did not get started until 1780 in the Netherlands, Denmark, and England. And it did not spread to the US until later than this. It took far longer than this to be enforced by white countries on African countries. There are still quite a few countries in Africa that still have no law against slavery.

The slave trade was abolished in Angola in 1836, and in 1854 the colonial government freed all its existing slaves.[17] Four years later, a more progressive administration appointed by Lisbon abolished slavery altogether. However, these decrees remained largely unenforceable, and the Portuguese depended on assistance from the British Royal Navy to enforce their ban on the slave trade.[17] This coincided with a series of renewed military expeditions into the bush. – Wikipedia

Many countries in the Middle East, Africa, Asia, and India still are actively holding slaves. That is, a large number of societies do not agree that slavery is wrong. You can see what Gulf countries think of slavery and how they accept modern slavery in the article Did Slavery Ever Stop in Arab Countries?

Which Monuments Are to be Torn Down?

This brings up the question of why only the monuments of people who lived in a time when slavery was generally accepted in the countries that pushed to stop slavery are being torn down.

This brings up a second question of whether blacks give credit to whites for eventually stopping slavery and being the societies that pressuring many societies to cease the practice.

A mob mentality has taken over the treatment of statues.

What is curious is that several blacks see their statues being pulled down as a serious issue — but are lackadaisical about white statues being torn down. This means they don’t consider important any of the contexts of the time, and the information brought up in this article. Typically, this is referred to by the term hypocritical.

Finally, there were true “good guys” in the effort to eliminate slavery. The British would certainly qualify. The African kings and chiefs were in favor of the continuation of slavery. Why is it that only white slave related statues are being torn down — while there is no celebration of whites that fought to end slavery? Blacks did not end slavery by themselves — whites fought to end slavery — yet there is little interest in noting these people that removed blacks in large numbers of areas from bondage. In the case of the English, there is little observance that their efforts stopped many more Africans from becoming slaves than would have if they had not intervened.